House in the Country

A project that the architect designed initially for himself combines a contemporary "green technology" roof and a nostalgic flavor of our childhood memories. 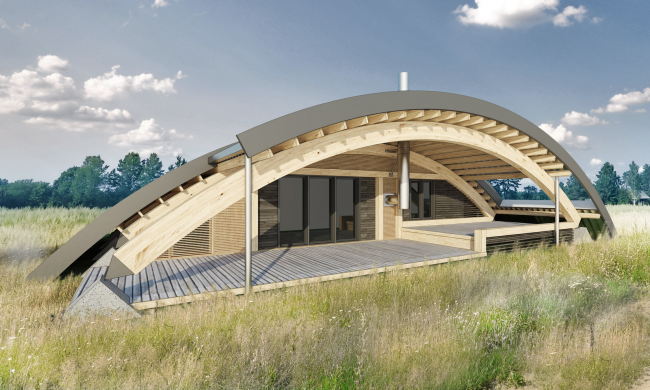 A small house with a square footage comparable to that of a Moscow double-room apartment - 45 square meters - was designed by Roman Leonidov as one of the options for expanding his dacha (country house) outside of Moscow. The land plot already has on it a capacious house, while a smaller independent hut was meant to occupy the sunny lawn in front of it - the architect has been drawing its different versions for a while now. This specific version proved to be one the most unusual, and, even without ever being built, got the third prize at "Eco_Tectonics" award, the judging panel of which specifically noted the use of the natural materials that the project proposed, and particularly the daring and at the same time practical design of the green roof whose gently sloping wing rises up from the ground to cover up almost the entire house. The "soil" coverage of the roof serves not only an aesthetic purpose but a functional one as well: it keeps the house cool in the summertime, and warm in the wintertime.

At a first glimpse, the green roof of the house may look to you like it was dug into a natural hill, the way it was done with the famous Bilbo Baggins house: there are already quite a few such dwellings around the world - ones that demonstrate their owners' and the realtors' soft spot for fantasy books. In the Roman Leonidov project, however, the house is not quite, or, should we say, nothing of this kind. What's more, it rather looks like a dugout, only a state-of-the-art one, whose image, unconquerable in this country, is successfully supported by a cast-iron stove that the author placed inside of it routing the chimney outside; or maybe it looks like a park hermitage, a place for solitary romantic meditation, putting one in the mind of the great hermits of the past. Here is the thing, though - there isn't any hill here; the land plot is totally flat, and the grass-covered "wing" of the sloping roof, when seen from the window of the master house, would play the role of the "geo-plastic" separating the terrain from the man-made hill. Two longitudinal lateral façades are cut vertically; the wooden walls have large windows in them, and the large sliding glass doors give an opportunity to both easily air the house and let in a sufficient amount of light. The awnings of the roof hang far out off both sides protecting the floor boards of the terraces from the rain, on one of the sides the floor boards being on a level with the ground, this area accessed through one of the sliding doors. And on the other side, flanking the back door, there are two bunks or maybe benches raised a dozen inches above the ground. 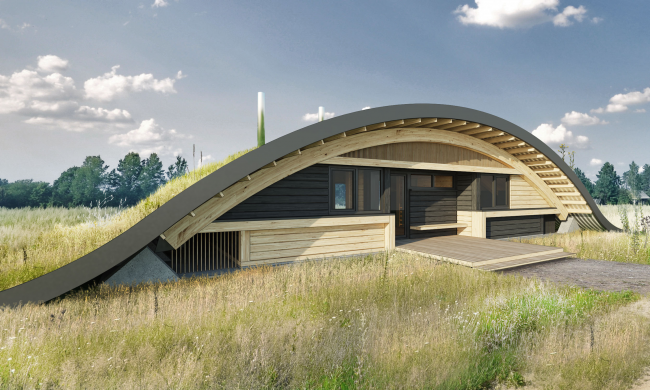 The thick "pie" of the green roof rests upon a gently sloping vault made up from large bent beams of glued wood and an array of narrower beams lying across them. This ribbed structure looks particularly interesting from the outside, on the marquee above the broad terrace supported by two slender metal pillars. Both outside and inside the decoration is based on the alternation of dark and light-colored wood.

The interior is ostentatiously modest and practical: the arch is covered with plywood, there are also particle board partitions; hanging in loops from the ceiling, the cables of the lamps of different kinds, a vintage refrigerator, and the already-mentioned cast-iron stove complete the hectic picture. This same idea is supported by the aged surfaces of "grandmother's chests of drawers" in the bedrooms, and the 1970's vintage armchairs in the living rooms. The "dacha" impression is rather an image that was carefully staged, and is hence deceptive: upon closer inspection it turns out that the stove, for example, is not exactly the "cast-iron" kind, but quite a modern device, with a little glass door through which one can watch the flame burn. And the furniture - the architect chose it for himself - is not the luxury type but still very sturdy and high quality. In other words, what we are seeing here is the image of the soviet dacha from our childhood memories, or even a dugout from a war movie, and not the dacha or the dugout themselves with their historical inconveniences. Or, we can look at it like this: designing a small and, obviously, quite inexpensive residence, the architect endowed it with recognizable features or traits of one, modest and at the same time based on family values and distant childhood memories.

Meanwhile, the project provides for decent outfit and comfort. In addition, the interior is rationally planned, not an inch going to waste, and the 45 square meters have been capable for holding a 20 square meter living room, with the already mentioned fireplace, a bathroom, two bedrooms, and a closet. A family of three would have a great time living here. But then again, Roman Leonidov's portfolio includes more spacious versions of similar houses. The architect, however, is being slow about actually building it for himself saying that he is ok with waiting until the right buyer shows up - somebody who will be capable of appreciating the architect's idea for what it's worth.
Text by: Roman Leonidov, Julia Tarabarina, Alla Pavlikova
Translated by Anton Mizonov 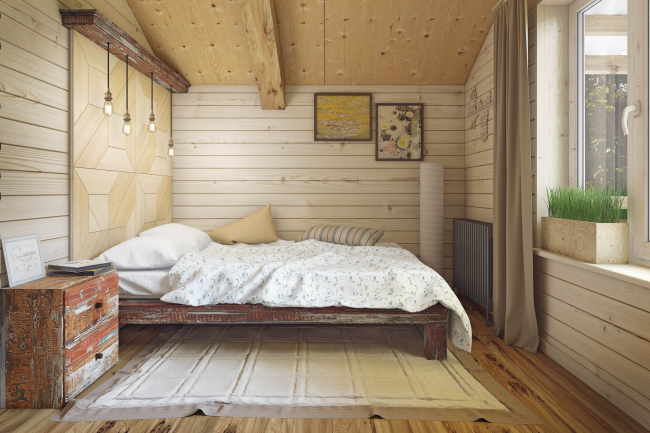