Not far from Shukhov Tower, amid the already built new housing estates, the Sky House Towers – covered partly with transparent and partly with vivid autumn-colored pixel skin – has reached its final stage of construction. 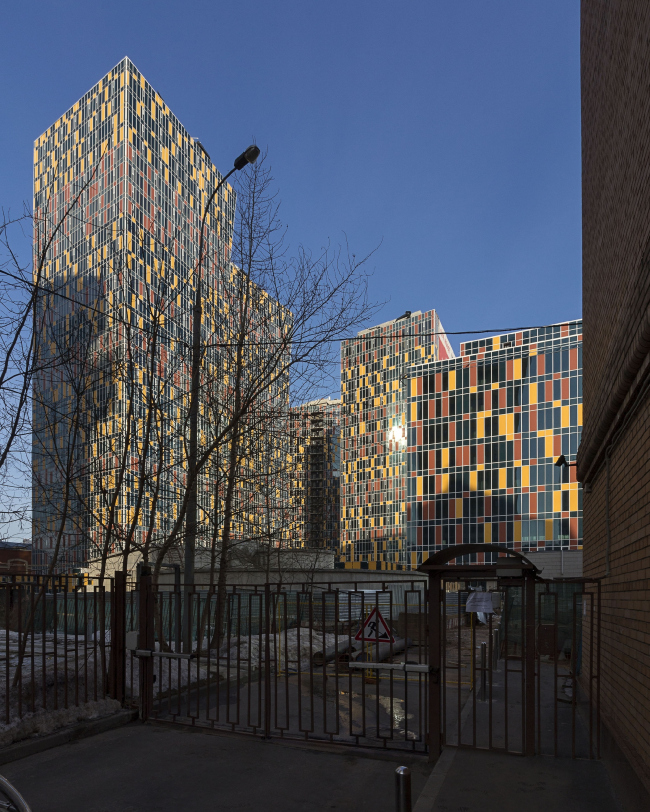 The area north of Shukhov Tower and the working-class districts surrounding it has recently been significantly expanded with new large housing estates. In mid-2000’s, at Shabolovka Street 23, the architects of “Ostozhenka” built five towers of “Capital-1 Constellation”. About the same time, construction of “English Quarter” upon the project of Mikhail Belov was finished further east, on Mytnaya Street. The area where the construction of a multi-functional (but mostly residential) Sky House complex is now reaching completion is situated between two housing estates, on the right side of Mytnaya Street. The houses are erected in place of several buildings of “Red Proletarian” factory (half-ruined by that time), around “Trud” Stadium – once part of the factory. So it is also an example of reorganization of an industrial zone. By early 2000s the stadium had been fully neglected, covered with weeds and with an aboveground heating duct lying across the field. The work on designing started more than ten years ago, in 2003 and the stadium was not planned for preserving then. Having an opportunity to use the whole site the architects have suggested connecting low-rise houses (up to 9 floors) into a closed composition, akin to a Roman arena built along the perimeter of the inner courtyard. In order to compensate for the football ground the architects proposed to create a sporting cluster inside the stylobate, with a mini-football field, fitness-club, universal gym and a pool. Besides, offices were included into the housing estate – an innovational idea for that time that became widely popular in Moscow only later.

The project was welcomed both by the client, and the city. But after some time, the city government decided to save “Trud”, one of the oldest Moscow stadiums, to modernize it and make it a training football field. Surely, the whole project had to be completely reviewed – within other limits, sizes and sites. Having lost a considerable part of the construction site, the estate has immediately grown vertically – from nine to almost thirteen floors – and shifted deeper into the site. One of the architects – Valeriy Kanyashin – says that first the authors wanted to restore the building line with eliminating the “bay” of the stadium by construction of a low-rise office building along the frontage line. Later on, when the architects got into the spirit of the local history, they decided that the city has gotten used to this court of honor with a small park behind an old pre-war fence. To build a house here means to deprive the place of its history. As a result, the park has been preserved together with the stadium and the fence – renovated. The office center has been attached to the high residential towers of the complex at the back of the site.

And it was the stadium with its grandstands that became the core of the final composition of the complex; it has become a bit smaller and is surrounded with buildings of varying heights. The long office center – rising higher as it approaches the tower buildings – is situated deep in the site, along its extended border. Four residential towers are densely composed in the northern part of the lot, taking up only about a hectare – a third of the territory. The similar towers, trapezoidal in plan, are placed evenly but broadly on the stylobate, whose “horseshoe” form opens towards Mytnaya Street. Yet months of work lie beyond the seemingly unobtrusive lightness of this picturesque arrangement. Valeriy Kanyashin explains that besides the challenges connected with providing comfortable insolation on a rather limited lot the architects had to consider all possible scenery spots, even the most distant ones. For instance, from a view on Vavilova Street, located rather far from Mytnaya, the towers were not supposed to screen the domes of Donskoy Monastery. And this is only one example. The authors turned the towers around, moved them, changed places, made them lower or higher. The final version satisfied everyone, including the future residents, since the visual deficiency in “air” and open spaces outside is not felt inside the apartments. The discovered configuration of houses and masterful planning of apartments provide the residents with views of the city. You can hardly see the neighboring buildings out of the windows. Despite the fact that in its foundation the complex steps back from the frontage line of the street, the tower tops fix this line anyway, forming a corridor of façade walls. The bend of the massive houses turning towards Mytnaya Street and reminding pillars of some gigantic bridge, reveals the authors’ wish to restore the city-planning justice. Of course, they had to preserve history and delicately step away. Such approach is typical for “Ostozhenka”. But we must not forget their skill of working with context, their fine sense of the city and ability to find the right architectural solutions. The slanting waving “flags” of the tower tops create a special intensity during movement along the street. The “cesure” of the stadium is not that obvious in the perspective.

Having found the best composition choice, the architects of “Ostozhenka” decided to fill the estate with contrasting vivid colors, despite the sizes of it. It should be mentioned that in the original version the houses were designed in cool coloring with prevailing grey and blue tones, quite suited for its realtor name Sky House. But in the end, the rich, colorful “fall” palette replaced the sky colors. It is the sandy ochre, burgundy brown and black pixels of tinted glass. This solution, according to Valeriy Kanyashin, comes from the impossibility to unite the whole diverse street development in one architectural concept. The contradictory proximity of intact old houses and the new ones – among those the early complex of “Ostozhenka” and “English Quarter” of Mikhail Belov and the panel housing of “P-44” – did not allow to follow one design and not come into collision with the others. “So we decided not to look back on what stands around, and not to repeat anything. A new complex is a contrastive gesture. The towers look too high and outstanding anyway, we could not hide them because we made them completely different altogether”, – says Valeriy Kanyashin. Nevertheless, the vertically-oriented pixel mosaic of the facades fits in the environment in its way, and reacts to it conceiving the city landscape from the point of view of a pointillist painting: the warm red and yellow panels crowd together closer to the neighboring houses and become rarer at the top, towards the sky. When the sun comes out and the sky is reflected in the glass, this attempt of the large towers to dissolve will become more convincing – although we know that it is impossible to camouflage such volumes completely with any visual effects. But besides dissolving, the pixel coloring serves for another purpose – it fully confuses the rhythm of the windows, and so turning the house into a sculptural volume from a rational checked block. The architects of “Ostozhenka” already have some experience with such artistic camouflaging: think of the housing complex “Vesna” on Kievskoye Highway, or even better the residential complex “Panorama” in Presnenskiy District – all made of complicate patchwork of differently toned glass reflecting and dividing the city views. There is a different history here – the houses are sooner variegated than united and the glass is unevenly transparent which adds tinges to the impressionist picture: it is one view in the morning and another in the evening. The architect as project manager of all the three complexes is Valeriy Kanyashin which leads to certain conclusions about the development of his style. Today, a pixel coloring is nothing new – and due to the house building company it is even getting boring – but think of the fact that this housing estate was started long ago, and looks fresh even now, as if cut out of some colorful latticed aluminum material. The history of the project is a history of overcoming: the changing terms, requirements of the city and the clients that also kept changing – the project was started by “Capital Group” company and ended by MCG; the rejection of the sizes and colors by the citizens, the authors’ doubts and constant search of compromise. The design works and implementation were not done by “Ostozhenka”, but by “Mosproject”, although the authors tried to keep the task in sight. Despite all the challenges of the long process, the complex designed fifteen years ago meets all requirements of today. Maybe only apartments are much larger than today’s standard. The complex thoughtfully includes public functions and high-quality development of the adjacent area with a small park where cars can drive into only for passenger drop-off. In one of the towers there is a kindergarten connected by a bridge and a stylobate. There are playgrounds and sports areas on the green roof of the stylobate, inside it – there is a pool with a 25-meter bowl, a large multifunctional gym, shooting galleries, hobby groups, a mini-hotel, café, restaurant and shops. In a word – everything that ensures a comfortable life even inside a dense urbanized environment.
Text by: Alexander Skokan, Valery Kanyashin, Alla Pavlikova
Translated by Anton Mizonov 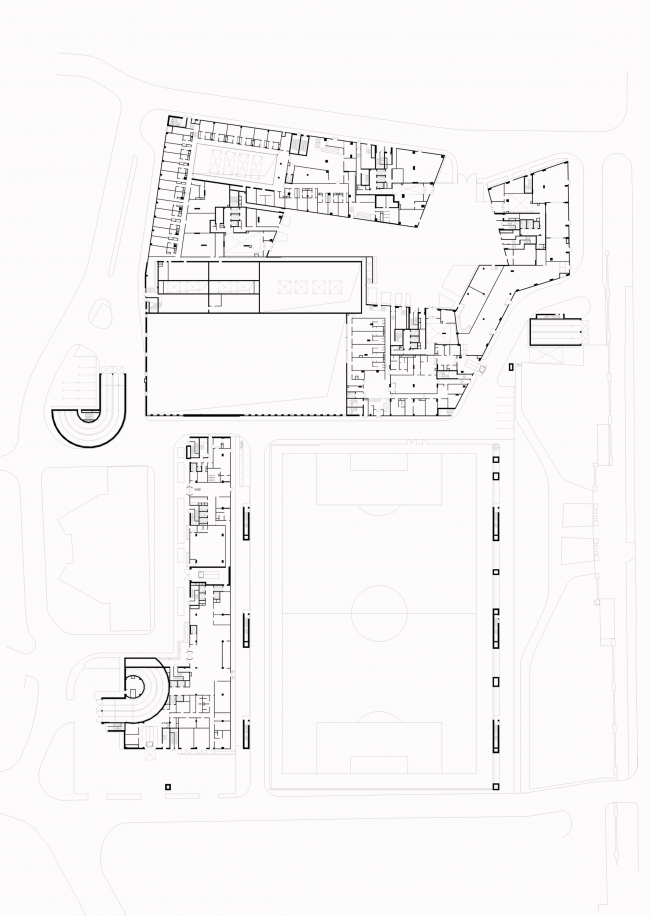 Multifunctional complex at Mytnaya Street. Plan of the 0 floor © Ostozhenka