It was "Atrium" architectural bureau that once defined the image of Yandex offices - easily recognizable today by their combination of flash and efficiency. It all started back in 2005 from designing the interior in an abandoned red-brick workshop on the Samokatnaya Street. Then there was the space at the Stanislavsky Street. In 2010, the company moved to the Leo Tolstoy Street, into a new facility in the business quarter "Krasnaya Roza 1875". And again it was Atrium that did the interior design, this time around for whole seven new floors: their main feature is the tree-like inside blocks with their lath-covered meeting rooms alternating with occasional "living" grass walls.

This consecutive, "Yandex"'s fifth interior designed by Atrium and implemented but recently is a new part of the office in the same business center. However, this time around, the bureau, along with a few other Moscow's established architectural companies, took part in the closed tender for designing the space for conducting external conferences. The prize - the right to design the second stage of the interiors with a total area of twelve thousand square meters - Atrium won in flying colors proving that over the years of cooperation it has learned to understand like no other company its customer's needs and, on top of that, anticipate the direction of the customer's further development. The image of the new interior turned out to be maximally natural and refreshing at the same time. The new five floors are situated in the recessed glass building of "Morozov". The first floor has in it a spacious lobby: the guests waiting area with a corian clam shell, living plants, and the reception desk with the inevitable Yandex logo on it. Soft backlight. Bright multicolored furniture.

Besides the entrance group that leads to the sculptural volume of the stairway and the accompanying wall of green plants, this floor also includes the administrative block and the premises for the public events. Higher up, there are three floors that include nothing but the workspace. And above all this, the fifth and the last floor belonging to the company has in it the conference hall and the sports and entertainment center. The work tables are placed along the glazed perimeter of the offices' outer walls, while the studies, the meeting rooms, and the coffee points are gathered in the center where the ambient light is less required. The architects tested this technique of organizing the workspace in their previous "Yandex" project, and, over the years of operation, it proved its efficiency one hundred percent. However, the main "hero", or, better yet, the main "core" of each of the work floors is the bright and agile passageway: it runs through the space at an optimal trajectory saving people from getting lost in the labyrinth of desks and chairs. It also has the capsules with meeting rooms, kitchens, and smoking rooms strung upon it. In a way, it can be likened to a corridor, only not of the usual type but intermittent and discontinuous like a corpuscle of light - because the open and the tunnels fragments alternate at rhythmic intervals. At some points, it is only the color band on the floor that saves you from losing your way - but the ensuing closed fragment with the facets of walls and ceiling makes a strong impression indeed. The complex geometry of the passages changes the efficiently planned office floor not only facilitating its navigation but also saturating its interior with human emotions - life-affirming, akin to the kind that people experience in an amusement park. What the architects ultimately got is a curious hybrid of open space and the classic "corridor-type" office - which in itself is not really a rarity but Atrium is capable of turning, time after time, the logistic nucleus of the workspace into an artistically justified and effort-efficient amusement ride. In the previous Yandex office, the passages were of a sophisticated multi-fragment shape, while here they are planned as being shorter and more efficient.

What is important is the fact that each such "corridor" is bound by its unique color, common for each specific floor. On the second floor, it is yellow, on the third - green, on the fourth - orange, and on the fifth it is dark blue. This "rainbow" navigation is supported by the bright red accent that echoes the trademark letter "Я" in the entrance lobby. 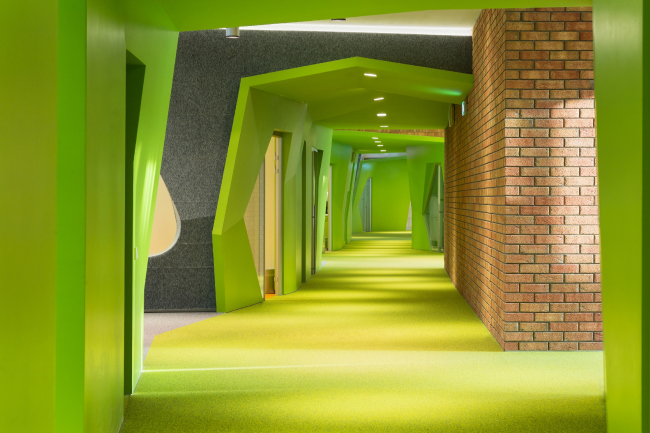 The second important difference from the earlier part of the office lies in the fact that in the former case the verticals of the almost-identical "capsule" blocks would run through the suspended ceiling, as if growing into, very much like trees, into the next floor. In the new office, the architects deliberately tear each block away from the ceiling - physically and with the help of the backlight. These blocks are very different; no two blocks on one floor are exactly alike: the eight types of finishes create images as dramatic as easily recognizable - for example, the capsules with unevenly drawn "bull's eyes" of windows wrapped into dark-gray shaggy carpet fabric. Others are surrounded by vertical carved wooden planks. Still others are covered with textured pixel-like pattern of horizontal wooden bars through which the glass lining and the inner rooms show through. One of the shell options is really functional: the capsule consists of deep shelves that the employees are free to fill in at their discretion. But the most striking impression is produced by the green hill that is covered from top to bottom with scramblers - the lounges that are inside of it look the coziest of all. It will only be fair to mention that in this project a fancy shell always conceals a space that is rational and efficient, where the very last little door is rationally justified. Besides, the diversity of the capsules, as we remember, is part of the navigation system: emotional, visual, and territorial. Every last little detail here shows some brilliant design idea. Probably, for this very reason, as you get inside, the last thing on your mind is that you are in the office of a huge corporation, the richest one, according to Forbes, in the Russian segment of the Internet, with thousands of employees. It has long been known that an upbeat creative workspace is one of the ground requirements of this famous IT company, and one that allows for it to attract new young talented employees with great conditions for creative work. As was already mentioned, Atrium has repeatedly been able to fulfill this mission - because its style with its combination of unexpected "sculptural-ness", diverse textures and brings colors best meets the expectations of the young creative minds. 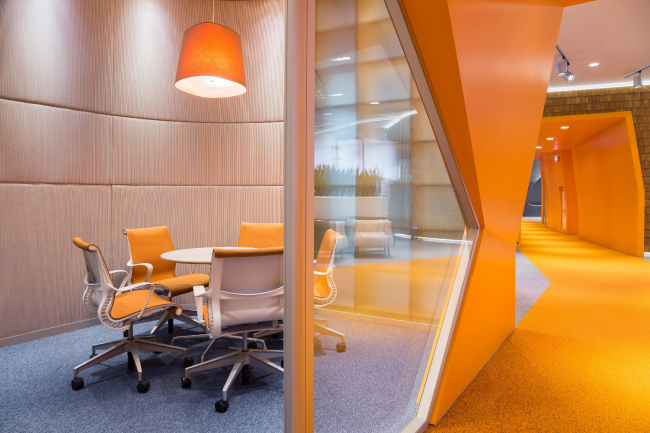 Every detail shows that the authors did not for a minute forget whom exactly they were working for. The glass entrances to the oases of the meeting rooms are executed in the shape of the cursor of Yandex search engine. The merry-sounding plaques on the doors continue and support this simulation of a merry traffic light: on Orange Floor, the plaques read "Orange Mood" and "Orange Necktie" (two cool Russian rock-n-roll evergreens - translator's note). On Yellow Floor - "Yellow Tulips", "Yellow Pants", and "Yellow Shoes", all this being not the architects' but the customers' initiative. The company's employees actively joined the game - which was a sure sign that they "accepted" their new home. So, Atrium has hit the mark yet again. 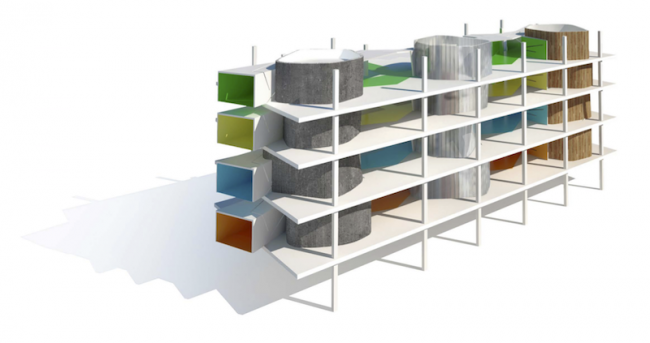 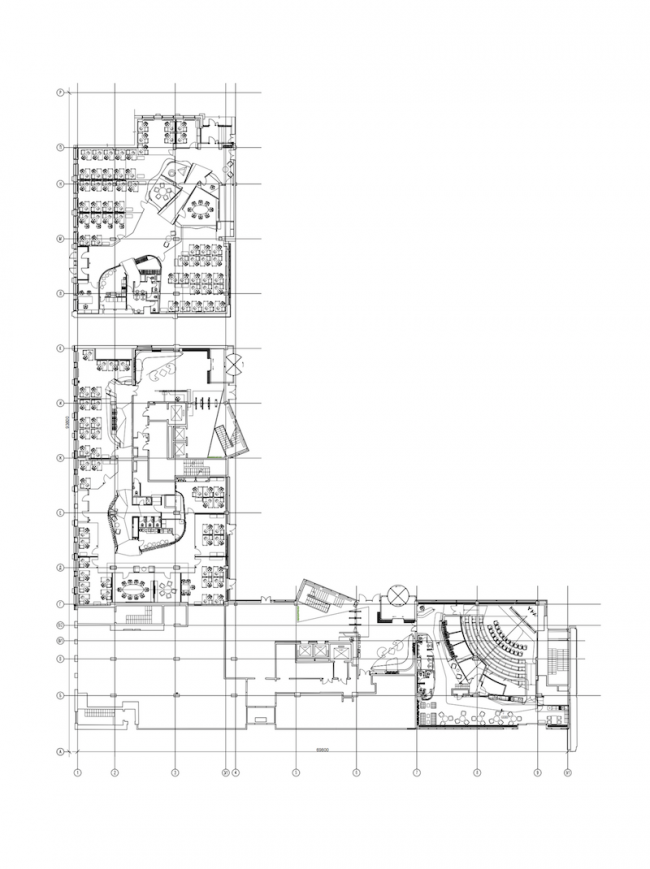