This architect/artist hardly needs any special introduction, even to the European audience. He is one of the world's best-known Russian architects. In 2006, his works represented Russia at the Venice Biennale, and now they are to be found in the collections of the world's most famous museums: German Architecture Museum (Frankfurt-am-Mein), MOMA museum of modern art (New York), and the Russian Shchusev Museum of Architecture. Europe knows Brodsky, first of all, for his "paper architecture": numerous proposals and concepts that he created in collaboration with Ilia Utkin for the Japanese architectural contests. Brodsky's "solo" works include installations on the verge of architecture and modern art, as well as a number of minor-form theater objects - his interior designs, restaurants, and conceptual pavilions are also widely knows in the western architectural community.

The works selected for the show cover the span of the last thirty years of the author’s creative work and give the visitors an idea about the variety of the techniques that this architect employs. The hall of the first floor of the museum features the more traditionalist works by Brodsky. These are pencil drawings, etchings, and silk printing. The upper hall demonstrates the new works created specially for this show: the "clay" graphics and the Indian ink drawings on tarpaper. 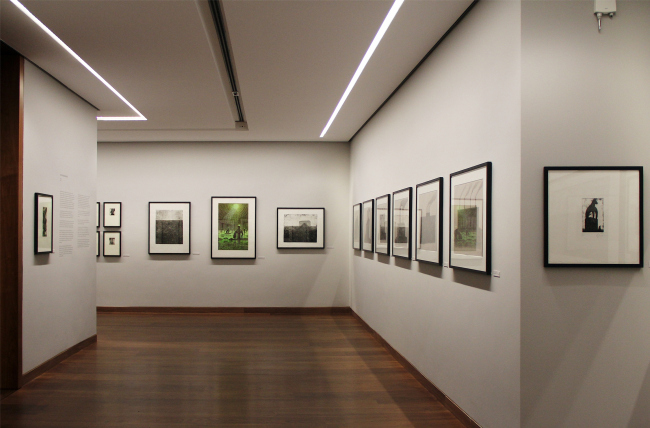 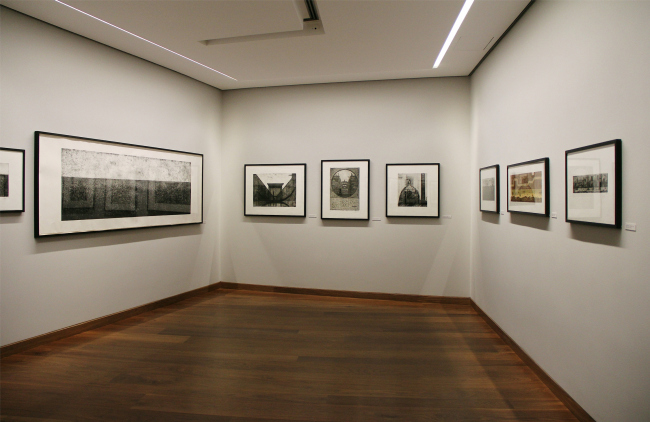 In spite of the diversity of the techniques, the exposition looks like a single statement meant to expose the visitors to the themes and motifs of the architect's creative work. Brodsky's "poetic manner" is based on the imaginary fantasy worlds that are presented, to a certain degree of conditionality, in the style of the classical architectural presentation: facade, section, perspective, and overview. The artist is focused on timeless compositions, or, rather the "after time" ones, like the marks left by people and left by history.

Located at the basement floor, the small museum halls, or "studies", as the museum employees prefer to call them, demonstrate the works of the 1980's - early 2000's. Here we see Brodsky as the follower of Piranesian school with its monumentality and fantasy-like flavor, although, his vision is always that of a postmodernist with the characteristic irony, overlapping of meanings and openness to various meanings. One of the main themes here is the unity of chaos and classic beauty, the postmodernist entropy and the renaissance imagery. It is expressed in the chaotic fractured perspectives with an odd inclusion of the basic architectural elements - the pyramids - and on the appearance of a pendulum under the fractured classic composition, and in the industrial chaos inscribed into a cupola space in a longitudinal section, set upon a building next to an industrial chimney. The renaissance aesthetics and the motif of the Venetian Carnival sound also in the allegorical portraits of some imaginary character. On one of these portraits, as if looking to give a clue to the viewer, Brodsky calls this character "an architect". The other allegorical portraits are reminiscent of the medieval "mysteries" and about the "carnivalized" commedia dell'arte, and are, of course, among other things, a paraphrase of the famous Primal Elements of Giuseppe Arcimboldo whom the surrealists considered to be their predecessor. Instead of the four natural primal elements, Brodsky uses the architectural primal elements (the perfect city that the architect holds in his hands is the Tower of Babylon hoisted on top of the characters' heads, the surrealist aesthetics being one of the clues to understanding the worlds that he creates.

The same aesthetics permeate Brodsky's industrial landscapes. These works are all about immersion into the introspective world of the subconscious where the logic ties are cut - or at least it looks that way - while the hero of the piece is in fact the world from which the humans have been deleted. This is the same theme that Brodsky explores over and over again: the human being was here and left his traces.

Most of the exhibits are left untitled. This way, the guests are left without any text clues that have become the custom in the modern art. Of course, the ideal viewer of Brodsky's works is a man of wide reading that is also quite knowledgeable in the visual art, somebody who is capable of counting the layers of hidden meanings, capable of appreciating the artist's subtle postmodernist irony, while the less experience viewer can get a slight feeling of discomfort finding himself or herself thrown in a world devoid of the familiar cause-and-effect connotations. These two viewer types are in fact two way in which Brodsky works can be read, the interpretations of this or that particular viewer capable of potential being a lot more emotional and leading him or her to an even wider stream of consciousness.

One of the pictures that are the closest to the art of book illustration is "Mesto Vseobshchego Protsvetaniya" ("Land of Plenty") (1998) - this is both a direct reference to Piranesi's images of Pantheon revised by the author's metaphoric subconscious, and an allusion to the solemn and stately markings of the city infrastructure objects that were common in the USSR back in the 1960: a library, for example, is a "temple of knowledge", and a movie theater is a "temple of spectacles". Here Brodsky uses the technique of a "metaphor come alive". What we see in front of us is indeed a temple, and not just any temple but the protoplast of all temples. The conditional suitcase on the picture, however, gives away a soviet citizen that is presented as a mythical being with a dog's tail that has just come to the "Temple of Plenty" with a sole intention of having a mug of beer.

The same space includes the pencil sketches of conditional architectural facades and other objects. In them, one can also easily see the surrealist aesthetics showing through, and one of the most enigmatic objects is probably the paraphrase of the most quoted work by Rene Magritte.

The exhibition is organized in such a way that the pencil sketches open up with Brodsky's studies for the works that are exhibited one floor higher. These are the works of 2014, most of which were created specially for the exposition in Tchoban Museum. Executed in the author's unique technique of "clay graphics", the facades refer us to the monumentality of the Stalin Empire Style and to the inaccessible within the boundaries of the human logic Kafka's "Castle". Here we also see the continuation of Brodsky's key theme - the footsteps left by the time. The key to interpreting these creations and the key to the entire exhibition is in the two pictures executed in Indian ink on tarpaper and reminiscent of a geographic map or maybe an axonometric model of an archeological research site. Powdered with little cracks, the clay facades thus are nothing but artifacts of the times past. Again, there is a fair share of postmodernist irony present: tarpaper was a very popular building material in the soviet "dacha" construction.

In this connection it will be interesting to also remember the architect's projects that did get implemented. These works are not in fact represented at the exhibition - but they are also about the construct of human footsteps left by our predecessors. Be that the "Vodka Ceremony Pavilion" at "Art-Klyazma" festival, "Rotonda" in Nikola-Lenivetz, or the restaurant "Pier 95" in a Moscow suburb, they all are built with the use of parts of the objects that had already been there: window frames, doors, and floor boards.

It is remarkable that the Berlin exhibition of the works by Alexander Brodsky takes place concurrently to Martin-Gropius-Bau's exhibition of architectural drawing "VKHUTEMAS: Russian Laboratory of Contemporaneity" (open until April 6) that showcases the soviet utopia drawings of the 1920's and the "paper" projects of the 1980's - two main phenomena of "paper" design, both born in Russia. In the situation of a raging economic crisis and the monopoly of large architectural companies to designing all the major projects, a new round of "paper" architecture is inevitably on the way. Possibly, the architectural drawings and the conceptual projects of the late 2010's will one day make the core of the museum's future expositions.

The exhibition is open until June 5 2015.
Text by: Alexander Brodskiy, Anna Kirikova
Translated by Anton Mizonov At the inauguration. Photo © Michaela Schöpke, 2015