A Museum That Reaches for the Stars

A museum above the park, a park of a museum, or the museum building as an exhibit in its own right... Three versions of the contest project of the Science Museum in the city of Tomsk - by Asadov Architectural Bureau. 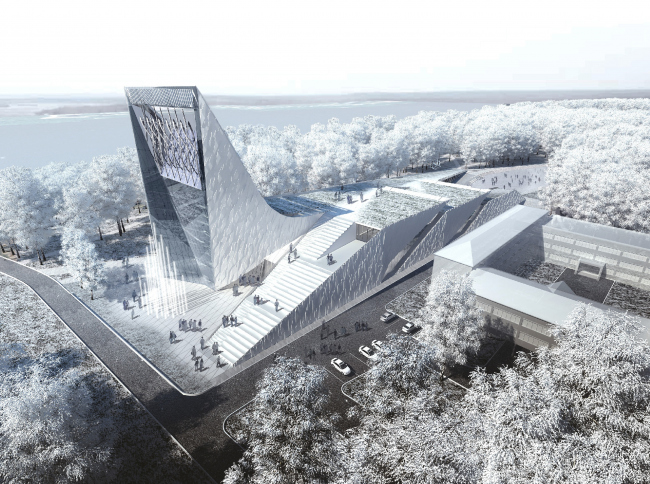 Organized by SAR bureau, the international contest for the architectural and town-planning concept of the Science Museum in Tomsk took place in the autumn of 2014 under the motto "science for people" - the new museum must become part of the large-scale project named "Tomskie Naberezhnye" ("Tomsk Embankments"). We recently featured the contest-winning project by "Studio 44". Asadov Architectural Bureau came up with as many as three versions of the museum building. One of them, entitled "Per Aspera Ad Astra" got awarded the "conditional" second prize by the judging panel: formally, there was no awarding any "places" in the contest, but in the judging process this project was one of the two that were considered to become the winner.

When asked about their work on this project, the Asadovs say that the unique and significant for the function of the museum on the one hand, and the officially protected park area on the other urged them to search for the most incredible and unconventional solutions. Indeed, the three versions proposed by the architects demonstrate totally different approaches to solving their task.

Version 1 - "Oblako" ("Cloud")
The project is based on the idea of preserving the park one hundred percent intact and placing the museum immediately above the surface of the lake. Neatly packed into a casing of metallic net, a lightweight irregularly shaped volume with outstanding cantilevers of the expo areas and the rectangles of sightseeing bull's eyes of windows covers the water area like a cloud. What is left ashore is only the hill of the entrance group, barely visible in the surrounding landscape. The structure looks like some sort of a starship that is moored to the embankment with a thin chain of the escalator leading from the lobby to the exposition hall. Apart from these moving-stairs, the only thing that connects the "Cloud" to the ground is the fire escape stairways together with the passenger and freight elevators. The feeling of an "alien" spaceship is strengthened by the presence of an open-air sightseeing platform at the top - situated on the usable roof.

Probably, this look wound best suit not so much a science museum as a science FICTION museum... But then again, who knows where the dividing line between the two lies nowadays? Version 2 - "Kholm" ("Hill")
This version was created parallel to "Cloud", and the authors consider it to be an alternative option. As opposed to Version 1, it is based on the idea of maximally "dissolving" the object in the surroundings. Leaving the entrance virtually in the same place, the architects "stepped back" from the shore and "about-faced" the museum complex 180 degrees. The idea of the "entrance hill" transformed into the solution that consists in hiding the whole main volume of the museum inside of it. Sunken-in below the ground level and overgrown with newly-planted trees, the museum "hill" simply mimicries to mix with the park. The only thing that gives its presence away is the soaring transparent wind-sail of the laboratory block whose glass facade reflects, like a giant mirror, the surrounding landscape by day and becomes a media screen showing installations if mathematic algorithms by night. 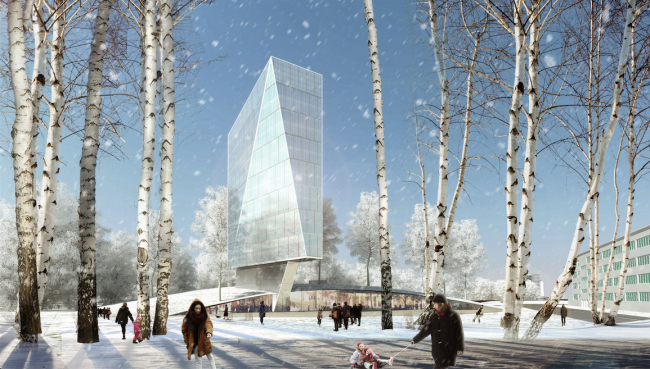 Version 3 - "Per Aspera Ad Astra"
Thus, the two first versions presented two mutually exclusive approaches - a museum ABOVE the park or a PARK of a museum. The third version must be the attempt to either reconcile them or find a third path whose advantages could outweigh the advantages of either of the projects.

In order to keep the tact as intact as possible, the architects pushed the building end-to-end to the building of the university and stretched it between the lake and the access driveway. According to the authors, "imbibing all the "juices of the landscape", the museum gradually gains height and then soars upward like a lighthouse tower". In this version, pretty much everything becomes part of the exposition - from the facade down to the last valve in the ventilation system. The multiple folding of the surface of the outside walls is achieved by using thick aluminum panels that work in contrast with the smooth surface of the stained glass. The extra green roofs do not require any special maintenance. They also provide for the building extra protection from the noise, overcooling and overhearing decreasing the loads on the air conditioning and heating systems. And these systems, it must be said, are truly state-of-the-art, using all the innovative techniques you could possibly think of. Not only do they provide for every little detail but the architects vividly demonstrate it: with a whole number of ingenious solutions, the museum's engineering infrastructure is turned into an interactive installation the work of which the visitors of the museum will be able to observe at special displays. 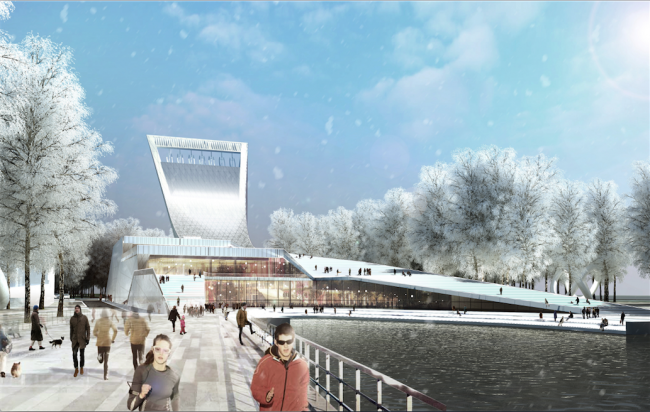 For the sake of so-fashionable today energy conservation, the Asadovs and their engineering partners, Engex company, use everything they can, including the air ventilation system with adjustable airflow that is triggered by the CO2 sensors. The shape of the complex provides for the possibility of hybrid ventilation with the use of the "earth channel" running along the lake, and the "sun tube" whose role is played by the volume of the tower. When the air passes through the "earth channel", it cools or heats which reduces its processing costs. The temperature difference inside and outside creates the thrusts that provides the motion amplified by the "sun tube". When the natural thrust is not enough, the electrical fans turn on automatically. This cancels the necessity to use the habitual air conditioning units on the roof that ruin the look of the building.

The project even provides for the fact that when the natural ventilation is on there is a possibility of producing the power at the expense of spinning the blades of the fan by the airflow in the "sun tube". This helps to accumulate energy. And the absence of any paintings or incunabula in the exposition gives the opportunity to lower the energy costs at the expense of lowering the temperatures if the halls during the non-working hours and in the nighttime... In a nutshell, the very building of the museum is a science/technology exhibit in its own right. There is science for people in action. The expo space is organized in accordance with the enfilade principle that gradually opens up all the expositions to the visitor. Starting from the main entrance, the people pass through all the halls and towards the lake - it is perfectly viewable behind the stained glass opened up into the park - then they get up onto the second level from where one can cast an eye over the way that he has made and then move on. On this second level, the transformer conference hall/scientific theater is situated. The climax of the exposition is the multi-height space inside the tower where the bulky exhibits are situated. Ascending the ramp that adjoins the scientific labs, you inevitably end up at the top level with a panoramic cafe and an observatory. From the south side, there are solar collectors and win-driven generators here that produce the power for the building - the interactive addition to the exposition.

The park becomes a natural continuation of the museum collection: the new network of trails connects the platforms to the exhibits and forms a single educational and recreational space. The surface of the lake turns into a platform for scientific experiments connected with water. The part of the embankment located "at the tail" of the museum is transformed into an active public space that is used for organizing open-air workshops and seminars. The roof of the museum continues the street exposition, enlarging the space of the park and providing extra emergency exits from the museum halls. Strange though it may seem, it is the roof that endows the building with such unbelievable possibilities and forms its unusual, eye-catching silhouette that the judging panel considered to be the solution that is slightly unfit for the Siberian climate. But then again, the authors defined their way themselves: "Per Aspera Ad Astra". In a quite up-to-date manner, conserving the energy, it simultaneously challenges the nature when it comes to the climatic difficulties, making a daring "nose" at it, one that reminds the Rocket Monument on Moscow's Star Boulevard, soaring upward into the space - a sure sign of the "1960's" progressivist approach to science.
Text by: Alexander Asadov, Andrey Asadov,
Translated by Anton Mizonov 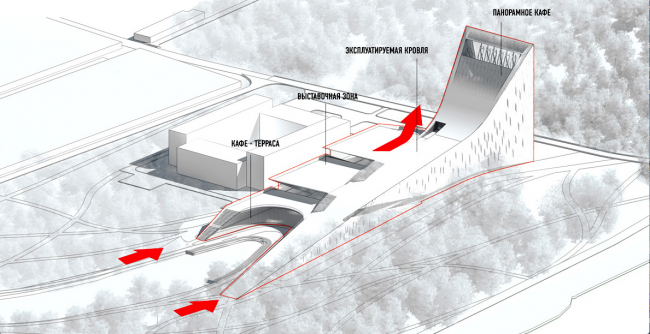