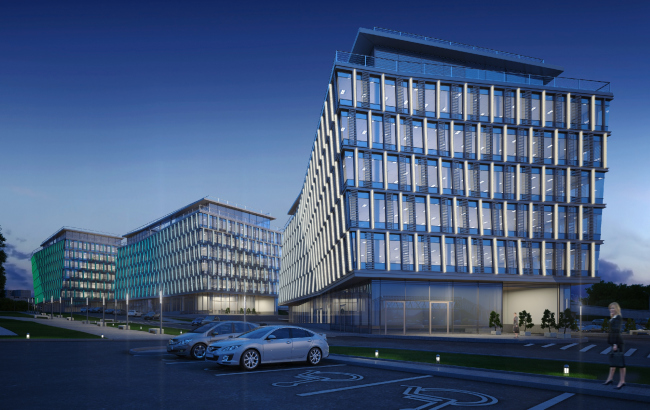 The ABD architects had a first "go" at this territory, situated in the immediate vicinity of the Mozhaisk junction, between 2003 and 2009, designing and building here the business park "Zapadnye Vorota / Western Gate". At that stage already, it was evident that, on the opposite side of this powerful transport structure, there must appear another similar object: it would have been a shame if the gate had but one "shutter". Flanking the entrance to the town from Highway M1 "Byelorussia" was do be done by two symmetric and identical (stylistically and in spirit) complexes.

However, so it happened that the architects were only able to get back to designing and building the second stage of the "gate" in 2014. By that moment, the future construction site - the segment between the Moscow Ring Road and the Barvikha Street - turned into a squatter city park by the name of "Dog's Lawn". In December 2011 the "wild" ski track running through the park even got an official number of 134 and included a ski stadium. However, against the background of the recently completed junction that already "intruded" on the "Dog's Lawn", when choosing between saving the park and the necessity to finish the construction of the entrance ensemble, the city opted for the latter. And now, the construction of the second - northern - part of the complex is about to begin: a composition of three buildings standing along the border of the land site and a small restaurant block hidden deeper inside. Thus, when the construction is finished, the entrance to the nation's capital will take on a complete view: on the one side, the glass striped buildings looking like green rocks from some fantasy novel, on the other side, still more picturesque group with a fancy deflection of its walls.

The project of the second stage of the "Western Gate" has been in the making by the studio of Boris Levyant for more than ten years already. Initially, it was planned that on the elongated triangle of the land site, squeezed between one of the exits from the yet-unfinished junction and a residential neighborhood, a large shopping mall would be built that would cater for the people of the adjacent residential areas and the drivers-by. The city council, however, was against building large shopping centers along the Moscow Ring Road, and the plot was given to the construction of a new office center. Today, this decision seems to make even more sense because the idea is gaining popularity of moving most of the offices from Moscow's historical center to the west and southwest parts of the city - the developing territories of "New Moscow" administrative district. Concurrently to this, a lot of housing projects are being built in Odintsovo and other close-to-Moscow areas. 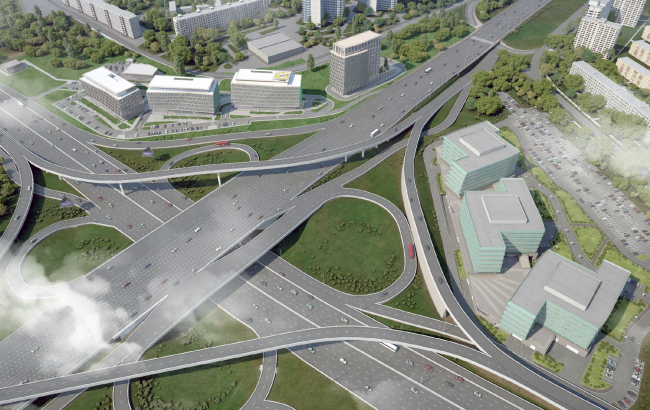 The new office and business center is a four-volume composition. Each of the three standing up front is no more that eight stories high. The fourth is still lower. On the plan, they all have the shape of almost perfect rectangles but, placed along the smooth curve of the road, they follow its trajectory. Still before the reconstruction of the road junction, it was planned that the starting point of the compositional line would be the tower of the hotel that would stand closest to the highway. Later, however, there appeared yet another exit to the highway, one that ran directly across the construction site - and in the first stage of the business park "Western Gate" the architects had to give up the idea of marking the boundary with a high-rise centerpiece but, on the other hand, this project will be implemented in the second stage. Still, though, even without a tower, the balanced silhouette makes the complex look quite complete. Furthermore, the absence of the hotel building sets off the compositional symmetry of the north and south "shutters" of the gate.

The most dramatic element of the complex is the inflection of the facade surfaces turned to the highway - it is not really abrupt but it still catches the eyes of the drivers even if the car is moving at a high speed. The inflection takes place in different directions touching both the main facades dissected by the large squares of the windows and the window piers, and the side walls of the buildings perfectly viewable from the junction. The seemingly simple solution proved to be difficult to implement from the technical standpoint. For calculating the construction, ABD architects turned to the German company Werner Sobek that already had expertise of such projects. This was an interesting experience of cooperation: the German designers and engineers plus the Russian architects, facade designers and lighting consultants.

Ultimately, an impression is created that the buildings are made from a very plastic material, if they can be "crushed" so easily. Or that they found themselves on the edge of two environments - which created this optical effect of light refraction. And, combined with such shape, the play of light is indeed impressive: in spite of the fact that the inflection angle is comparatively small, under the rays of the sun, the flat surface instantly comes alive and takes on a three-dimensional quality. And on the inside, within the space of one floor, together with the fact that its plan is brought to the rational and efficient rectangular shape, the jaggedness of the outside walls is not felt virtually in any way. And - the quality of the offices is improved at the expense of increasing the height of the floor up to 4.05 meters and floor-to-ceiling windows. As distinct from the buildings of the first stage, the new complex does not have floor-to-ceiling windows; here, the tall narrow windows alternate with grill window piers, providing a dynamic "division" of the floors over the facade. The thus-set rhythm is supported by the diode lights one module high integrated into the facade system. The dimmed soft lighting allows for changing the color of the building in a quite unobtrusive way, from red to light green.

In the course of the work, the architects came up with a few versions of color solutions, including rather bright ones. However, as Boris Levyant shared, at the end of the day they opted for the more reserved and mellow materials: "The final color set was approved as a result of considering the project at the architectural council, and I am happy with this choice because bright colors tend to fade away quickly. In this case, we were able to achieve the richness of color by using the nighttime lights". 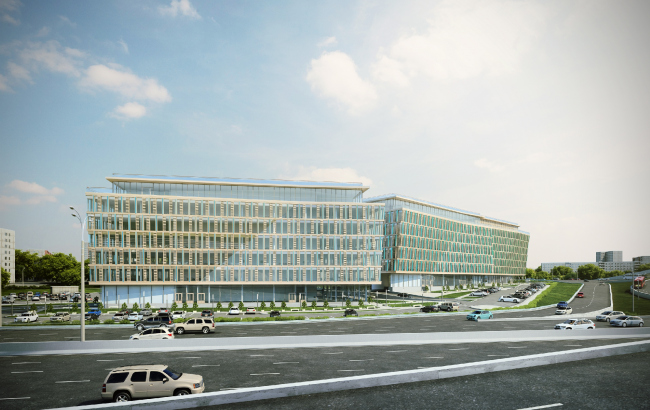 The upper maintenance floors of all the three buildings are shifted in respect to their main volumes and are almost completely executed in glass - this makes then but barely visible from the highway. What is visible is only the flat roofs overhanging above them. Upon one of the blocks, a helicopter landing is provided with an elevator going up to the roof - "arrival & departure". Aside from the engineering and technical premises, hidden in the central part of these volumes behind the metal bars, the design also provides for a few VIP rooms designed as glazed terraces commanding panoramic views.

All the buildings are visually "lifted" off the ground - which makes them look all the more surreal and weightless. This levitation effect is achieved at the expense of deeply "sunken in" and completely glazed bottom floors thanks to which the building looks as if it were hanging in the air. Under these overhanging volumes, walking galleries are organized. The organized territory with the green lawns, minimalist street lights and the winding pedestrian trails makes one forget about the noisy highway running nearby. The trees that used to separate this land plot from the highway were practically destroyed as a result of the expansion of the junction, laying bare the houses that were there. Now it is the complex itself that must become the noise screen for the neighboring residential houses. Luckily, there are enough trees in between them - ultimately, a small part of the park was left intact there, inside of which the three-story restaurant block is hidden. Designed in the common style of the whole ensemble, this fourth building of the complex is mainly designed for the local people and it will also function as a link between the business center and the residential area.

The construction of the complex is due to start this year. One must also bear in mind that the first stage of "Western Gate" is used full-scale by the owners and the tenants. And this is a great result for an office center standing right next to the Moscow Ring Road. By this, ABD architects, whose projects have for years been showing one of the highest levels of ROI, proves the ultimate compatibility of the idea of localizing the residential and the working areas outside of the nation's capital historical center helping to get rid from the bulky offices and its inevitable traffic jams. And as for the flashy image and the efficiency of "Western Gate", they allow for us to hope for the repetition of its predecessor's success.

Yet another important feature of Moscow's "Western Gate", one that Boris Levant has been developing for over a decade on the Mozhaisk Highway: its architectural and design solution turned out to be also quite "western" - the green park, the low-rise buildings, the balanced yet flexible shapes, the open composition, the visual lightness and purity. Such gate marks the city entrance not like some "Straits of Hercules"; they are totally free of any pompous grandeur of your typical centerpiece - this is a quite "European", in a whole number of ways, solution, technology-efficient and up-to-date. Possibly, it is just as well for the project that, due to circumstances, the architects had to forego the idea of building a tower here.
Text by: Boris Levyant, Boris Stuchebryukov, Alla Pavlikova
Translated by Anton Mizonov