We publish two planning projects by "Archstroydesign" Bureau of Aleksey Ivanov. In this particlular issue - new urbanism and a little bit of an English park straddling the Pakhra River. 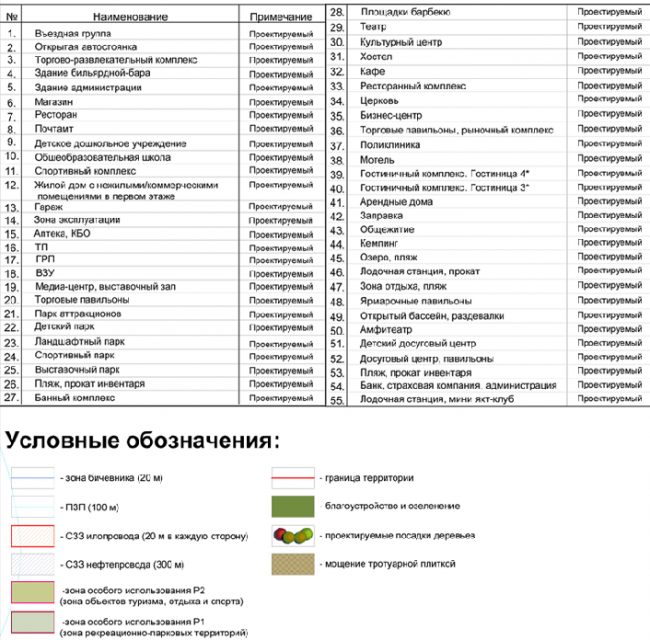 The address runs quite contemporary: the village-type settlement of Chulkovskoe, next to the village of Zelenaya Sloboda, in the vicinity of Volodarsky Settlement. Three hundred hectares of land with beautiful countryside scenery and interesting relief straddle the smooth bend of the Pakhra River. An economy-class settlement. Residential buildings, all the necessary infrastructure objects, a large park, shopping and office areas, and a large medical center. A town outside of town. In essence, a thing in itself.

From the town-planning standpoint, this is a poly-centric integrated structure that connects the residential areas and public territories saturated with the most diverse scenarios.

Two years ago, when it was only just beginning, the task made perfect sense and did not look challenging at all, had it not been for two but's. First of all, part of the settlement got separated from the main one by the riverbed. Second of all, at the moment of the beginning of the work on this site - located, by the twist of fate, between the Kashirskoe and Novoryazanskoe highways - the construction of a loop of a new motorway was already started. The construction of this road was federally funded but this new four-lane thing was splitting the future settlement into two equal halves - practically isolating them from one another and leaving them devoid of the atmosphere of a "quiet country life". Besides, on these scarce hectares, the architects were to build some 350-400 thousand square meters of low-density residential premises, at the same time meeting all the environmental requirements of the river and forest protection zones, as well as other numerous conditions and regulations.

The best idea turned out to be that of dividing the complex land plot, literally "strangled" by the road loop, into five independent parts calling them the recently popular word "cluster". "To each cluster - a character of its own!" It's not about the term, however: the very shape of the land plot dictated such a solution.

On the one side, all the parts, i.e. clusters, are quite self-sufficient; on the other side, they are all interconnected with a network of pedestrian trails and the already mentioned highway that the architects, after a long negotiation, were able to relocate, moving it off-center and closer to the outer boundary of the settlement, providing extra exits leading inside the quarters. As a result, only shopping and office areas were left "footloose", as well as the medical center with a clinic and a recreation house, and the hotel complex, standing on its own in the middle of the park. As for the river that tears the plot apart, thanks to its unnavigability, the issue was settled by building a few bridges that are accessed by long pedestrian boulevards.

"We took up "Project Pakhra" at the time when town-planning was dominated by "new urbanism" that implied the absolute chastity of the lines and the functional clarity of the planning structure, as a rule, in the shape of an orthogonal grid - shares Aleksey Ivanov - It was this genre that our customer picked, putting us into rather rigid boundaries". Despite these boundaries, however, the architects were able to come up with ways to give some variety to the clear-cut and, ultimately, extremely pragmatic square planning. 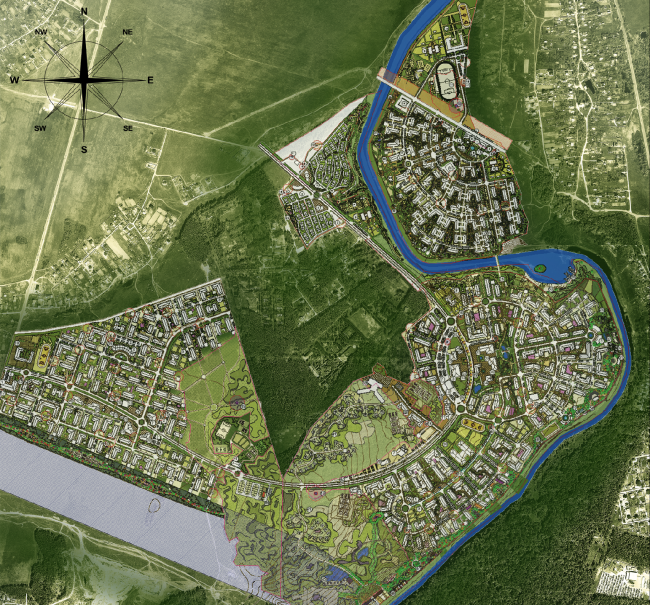 "For example, in the main - northeast - part, we used a fragment of radial and divergent planning: following the terrain, all the buildings gradually descend down to the river. In this place, the Pakhra's bank is viewable practically from every spot. The ring of the inside motorway singles out the town center of this cluster with a theater square and a green park inside of it. And as for the remotest - northern - part, we placed in it the sports complex and the educational institutions. On the opposite bank, at the entrance to the settlement, the architects plan to build a number of two-story townhouses. A little closer to the center, on the other bank of the Pakhra, there stands the Church of Michael the Archangel: its domes can be seen from most of the streets - which provides visual interconnection of the settlement and the unity of this urban entity".

The final stage of the construction is the western section with an area of 80 hectares. In this place, the arrangement of the residential houses is completely subjected to the orthogonal grid, within the framework of which, nevertheless, practically all the groups of quarters are designed differently, while the streets simply refuse to cross at a right angle, changing their direction now and then. In the southern part, an independent territory next to a small creek will be given to hotels and rentable houses. On the river bank, there will be beaches and boat-renting points.

Alternating and mixing fragments of simple planning solutions, and developing them in different directions - north/south, east/west - the architects were able to make the traditional "quarter slicing" look diverse, subjecting the master plan to an exquisite arc that livens up the settlement's scenery connecting not only various building sections but also a lot of interesting sightseeing angles and picturesque views.
Text by: Aleksey Ivanov, Alla Pavlikova
Translated by Anton Mizonov