On foot, by water, by air

The “Miraks” company, famous firstly for the “Federaciya” tower, is developing a considerable number of projects around the City and right beside it. Outside the Tretie kolco [the third ring] Norman Foster is designing project of an egg-shaped building, not the first one in the Lord’s grand portfolio; on the opposite bank of the Moscow-river the complex “Miraks-Plaza” by Sergey Kiselev is being actively constructed, we have written about it lately. Actually, the both districts on this side of the river, between the Tretie kolco, Kutuzovsky prospect, Filevskaya metro line and 1812 goda street, are being reconstructed by “Miraks”: the building by Kiyonori Kikutake will be in the western side; in the centre there will be constructed an administrative-business complex “Gelion” by Aleksey Voroncov. In the southern side, by the prospect, there will be built an “institute” district of Stalin period with participation of Sergey Kiselev. The range itself and the architects who are taking part in its realization leave no doubt that in the nearest future this piece of Moscow will definitely become more attractive.

Recently a closed architectural contest on development of the embankment, which the listed districts join, has been held. In fact, this is the part of the riverbank between the “Miraks-Plaza” and the future house by Kikutake, was presented on the MIPIM exhibition held in Cannes under the name “Paradise living”. A Paradise house needs a suitable embankment – must notice that the bank of the river is the last “uncertain” project for the territory. For the final consideration there were the four projects: by Dmitry Aleksandrov, Aleksey Asadov, Ireland architectural company “Murray Ó Laoire” and the architectural studio of “Miraks company”. The project by Asadov’s studio was chosen. Hopely, we will tell you about it soon, and now will tell about the project by the studio of Dmitry Aleksandrov.

First, it is important to notice the site is hard and it has almost all the problems, which has the place for “Miraks-plaza”. There is a line of pressure canalization, gas pipes and high-voltage line here. In a small distance from the bank there goes Filevskaya metro line, it will be included in the ensemble of the mixed-use complex and will be a southern border separating it from the city. There will be a car road over the metro, also a monorail road or “light metro” – the three ways join on this part. Then the monorail road will turn to the North and by the bridge over the Moscow-river to the future building by Foster. In parallel to monorails there will be another bridge, for vehicles. So, the architects met a specific urban planning task – in general view, it is clear this is not a house or a street, or a district, but it is primarily a transport structure, as well as social and nature one, if it is right to say so. Now the territory has got the status of “nature zone”, but in reality the bank has a lot of industrial buildings stretched along the river with a few poor trees among them. The territory is tightly separated – ordinary people have no way there. There is no embankment – next to the most high-status business development of Moscow the riverbank is dirty but virgin.

The variant suggested by Dmitry Aleksandrov can be described as calm and laconic. The complex creates a multiplayer space along the bank, half-open to the waterside. The curve of the river is slightly accented, intensified by the outlines of the constructions and is divided by the three buildings-docks. “Noses” of the docks turn to the West, upstream and create bays. This idea is interesting – probably it was designed to prevent water in bays from stagnating.

Generally, the river is given a special attention in the project, river is its main focus. This is not typical for Moscow, it is a kind of city with a lot of rivers, small rivers, underground waters, but this is not that obvious. Moscow rivers are mostly dirty places, industrial and uncomfortable – unlike in St. Petersburg which is almost pierced with the cult of rivers and bridges.

In the project by Dmitry Aleksandrov everything is different, it is not isolated from the water, but quite actively takes it in. The idea has its grounds – the river is not very dirty here, it is comparatively close to Serebryany Bor. Around the docks there will be a yacht club. Over the largest of them there hangs resting on metal “legs” the building of the apart-hotel combined with a business centre on the roof of which there will be a helicopt deck. Its glass facade (in the project there is a mention of joyful color glass) becomes a river facade of the complex. Over the second and the third docks there are cafes. In winter – if the Moscow-river will get frozen ever again – there will be shows on the ice.

The other focus of the project is the ground. Strictly saying in modern architecture there are three approaches to the ground – they either excavate and completely destroy it, or transfer it to a roof or do not touch at all and accurately cultivate it. Often all the three are combined in a single project. Like in this project. Well, in its description it is said the volume of excavation works is minimal – this means they will do that where they urgently need to do so. But if we look at the complex in profile it is cleat that the bank is turned into a stretched multilevel hole of concrete floorings rising above the ground: metro line, open now, creeps into the tunnel box on the roof of which there will be a car road and there will placed supports for monorail. Then, closer to the river there will be shops, cafes, parkings, on the roof of which there will be a boulevard. The green roof stretches along all the constructions and enlarges twice the space of recreation.

“The third element” of the project is people, or rather their moving. For separating their ways there was made a special accent: the centre will not be entirely available for public, some parts of it will become a “club zone” available by some modern member cards (though from time to time they will be open for the rest public). This is why it was necessary to think how ordinary and not ordinary people would move, and where would be cars placed. Within the complex there will be no vehicles if not consider the mentioned before car road on the roof of the metro that goes along its border. There will be the two entrances – from the east, from Miraks-plaza and from the west, from the Kikutake’s building side; in front of each of them there will be a car-parking – further people will move by electric carts, bicycles or walk on foot. There will be lifts to move vertically among the storeys.

“Such an elementary character – from the word “element” – does not mean plainness, but rather vice-versa: the project has simple architectural forms, but also the great work is obvious, it is important for the place where cross the ground, the water and people. It seems the architects were considering each element separately and in the end it all came to a simple but complex structure. 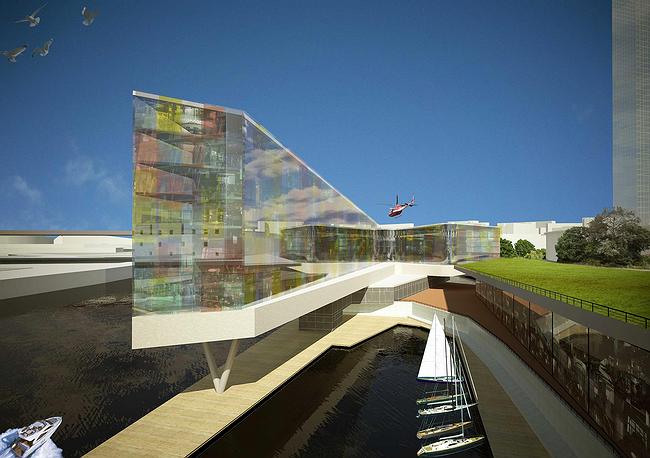 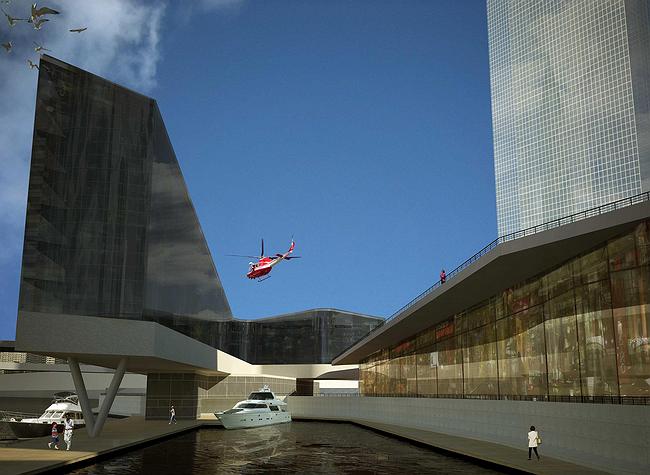 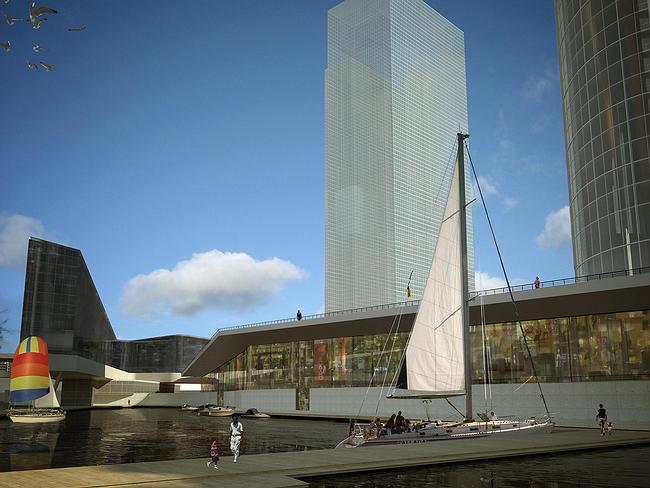 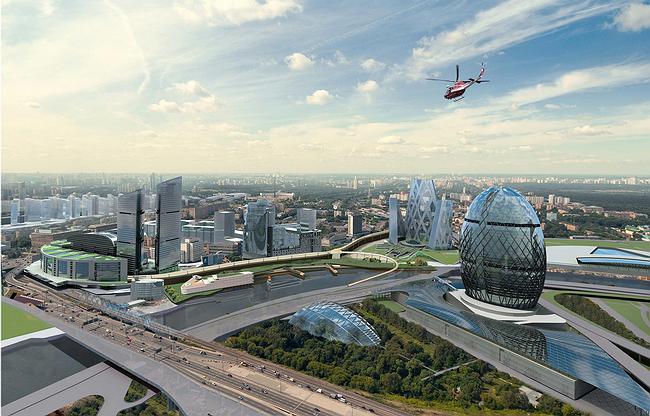 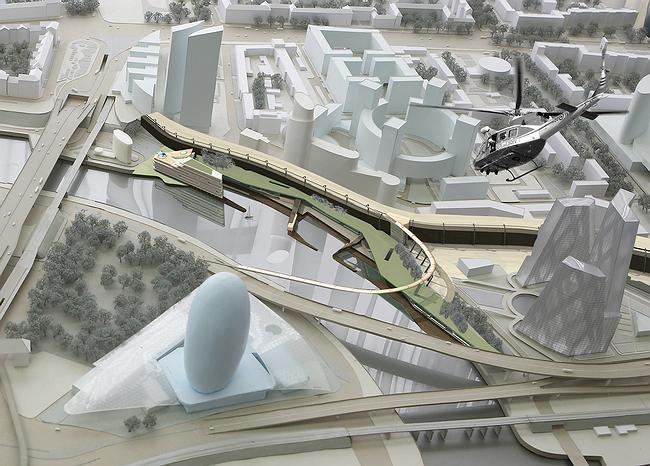 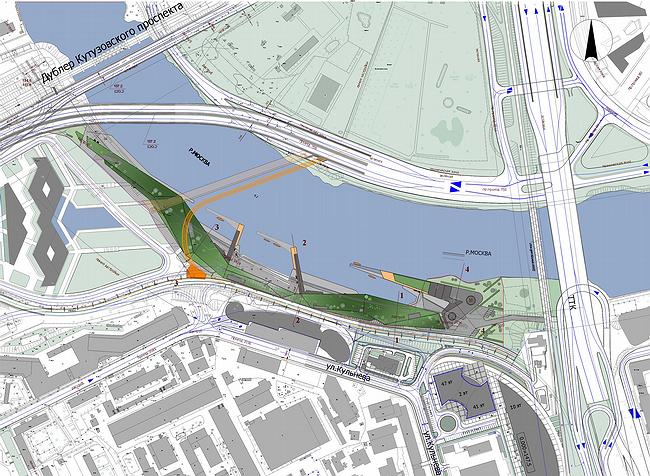 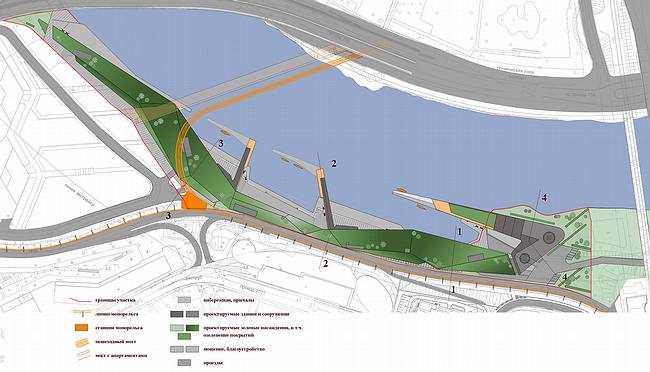 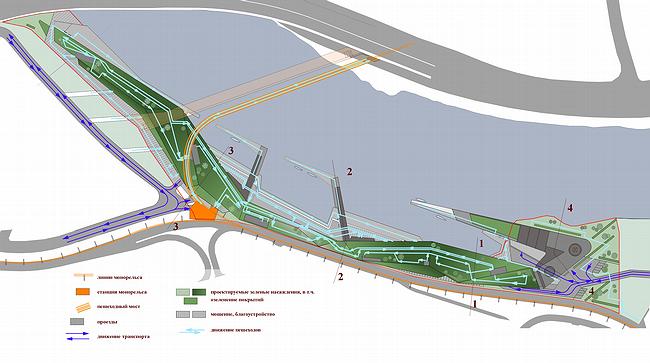 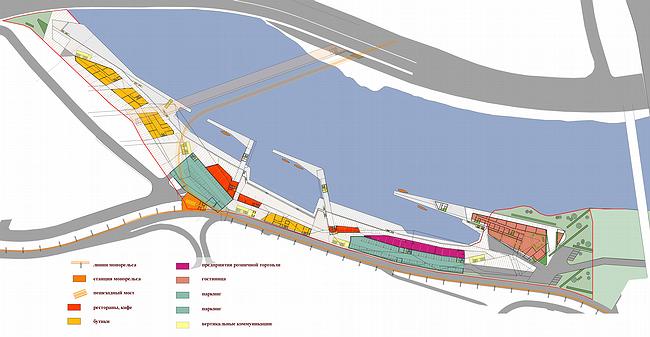