Not far away from the famous artist village in the north of Moscow, "T+T Architects" is designing a new apartment complex executed in the aesthetics of the contemporary European summer home.

The apartments will be built in the vicinity of the , on the territory of the former Pilot Plant #408. The plant that occupies a little over a hectare has already been taken out of operation, and its buildings are standing in wait of reconstruction work. One cannot help but recognize the location of the former plant as very convenient - a 10 minutes' walk away from the "Airport" metro station, literally next to the Leningrad Avenue and the Third Transport Ring - so it was "doomed" to be renovated. It was almost at once that the investor made up his mind about the new function of the complex - the "overcrowded" territory and the rather high housing density would not have allowed for building either an office center or a fully-fledged housing project with its mandatory infrastructure. For developing the concept of the future reconstruction project, the company KR Properties invited its long-standing partners - "T+T Architects" Studio. The project grew far beyond the mere renovation job, though: the architects were issued a challenging task to come up with a new typology of the apartments. The idea to come up with something extraordinary sprang not (only) from the commissioner's vanity. The thing is that the nearest neighbor of the former plant is the residential complex "Triumph-Palace" - the 260-meter-high skyscraper that claims to be stylistically close to the famous "Stalin" high-rises. The future apartments are only separated from "Triumph-Palace" by a narrow in-block driveway, and it is plain to see that there is no rivaling this high-rise either in the dimension category or in the housing class. However, the idea of making it clear that the new complex has a completely different origin was still on the commissioner's mind, and this is exactly how he formulated his specifications to the architects - the project must become a "chamber" and cozy city block that would hopefully offset, in an unobtrusive manner, the aesthetics of the "elite" and "dwellers-only" residential complex "Triumph-Palace". "The solution suggested itself: because of the difference in the number of floors, our complex is turned to "Triumph-Palace" with its roof, so what we did was turn it into its fifth facade" - shares the leader of "T+T Architects" Sergey Trukhanov.

For inspiration the architects also turned to the immediate surroundings - the five-minutes-drive-away artist village "Sokol" with its two-storey housing, gable roofs, and quiet little streets became one of the main starting points in creating the image of the new complex. As Sergey Trukhanov explains, "T+T Architects" borrowed from the famous village not some specific techniques and solutions but the very aesthetics of the old "dachas" and country pastime. At the same time, the industrial origin of the project prompted the loft style, while the decision to turn the roof into the fifth facade made the architects turn to the contemporary Dutch architecture that is in the habit of experimenting with the shapes of the mansards. These presuppositions gave birth to the ideology of the complex: from "Sokol" the authors are taking the peacefulness and the quality of being "human-friendly", as well as the rhythm of the gable roofs, reconsider them in the new materials and enrich them with the carefully renovated brickwork. This is how Plant 408 turned into the loft block "Studio8": the past gets a new life, gracefully growing into the future.

Yet another challenge was about the fact that the factory buildings turned out to be vastly different in their depth and configuration. One can see here quite compact volumes of a square layout, the thin elongated little "train cars", and a very large building in the center of the site with a huge floor depth. This is why making a rough sketch of the style of the future complex would not have been enough - the architects searched for a very specific solution for each of the volumes. Part of the territory is cleared of the old garages and dilapidated structures in favor of creating the public space, an inner pedestrian-only square of Studio8, and organizing the parking lot (although the architects were only able to get the necessary number of car stalls at the expense of the more expensive automated parking garages).

The buildings of the complex form a self-sufficient composition, some sort of a city within a city that has in it, besides the main square, a few nice little yards, alleys, and driveways. A particular role is played by the so-called "Building B" - the narrow building of a strongly elongated shape that in fact performs the function of the wall that separates Studio8 from Triumph-Palace: of course, there is no getting away from the direct visual contact with the skyscraper - but on the ground level this building helps demarcate the territory of the new complex. In much the same way, works the elongated volume of the multilevel parking garage. This position at the junction of two fundamentally different styles also left its mark on the architecture of these two volumes: the car park faces the neighboring high-rise with its neutral blind wall, while the facade of the residential building is securely protected by the overhanging aluminum roof. Probably, this volume would have looked as a blind zinc-plated wall, had the architects not fractured it into separate sections that they deliberately placed in a staggered fashion. The "friendly" appearance of the building is also enhanced by the grand-scale glazing of its side facade.

The most challenging task was finding the optimum solution for the largest "Building A" that is almost deep. In order to provide for the comfortable insolation of its every room, as well as the insolation of the closely adjacent "Building B", the architects deliberately shifted the crests of both roofs and used the technique of under-the-roof stained-glass. The attic windows designed as sleek metallic braces, enhance this dynamism: they look like a headdress that is about to slip down your forehead unless you hold your head up high. So, this house also, while facing the Airport driveway with its main facade, does not stop at "turning its nose up" a little bit: its monumental neighbor does not embarrass it in the least, making it, if anything, choose its dress and accessories more carefully. So it was not by chance that at the last "Golden Section" the project Studio8 was awarded the special diploma for "Particularly successful solutions in the dense housing conditions".

By the way, the word "accessories" is not a metaphor here. In their reconstruction project for the former plant, T+T Architects made provisions for every little detail: the options of the facade finish, interior design, and even the system of navigation around the complex. Even in the tiniest detail, be that the parking post, the fencing of the waste collection area, or the street sign, the authors carefully observed the "loft" style that they originally chose. The visiting card of the block will be the wall graffiti that will enhance its "industrial" origin probably even more eloquently that the traditional brutal brick walls. 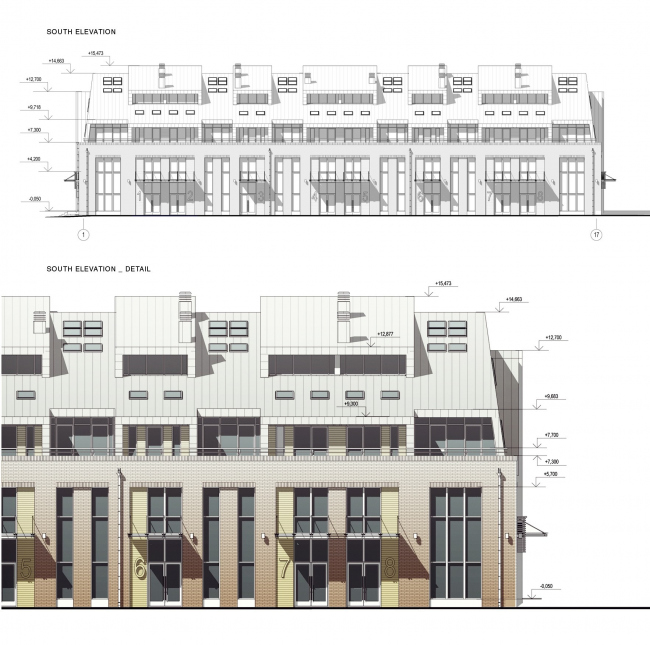 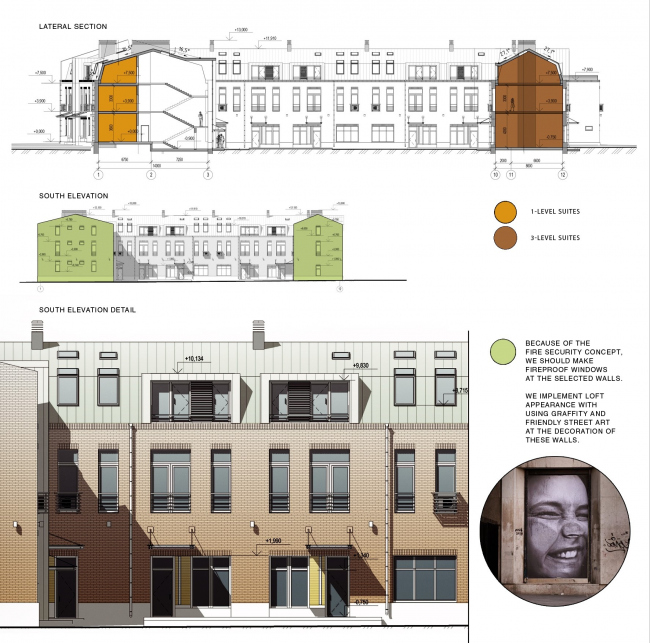 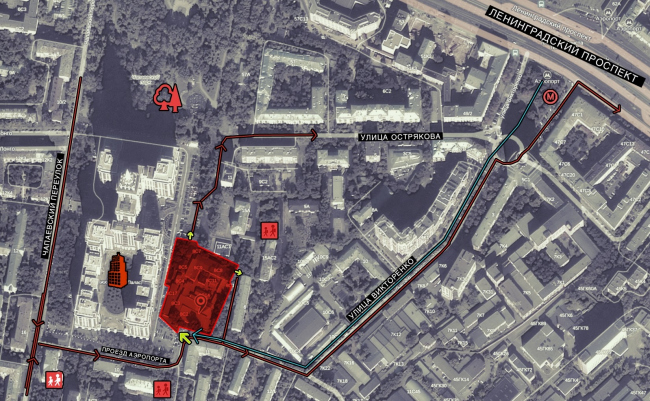 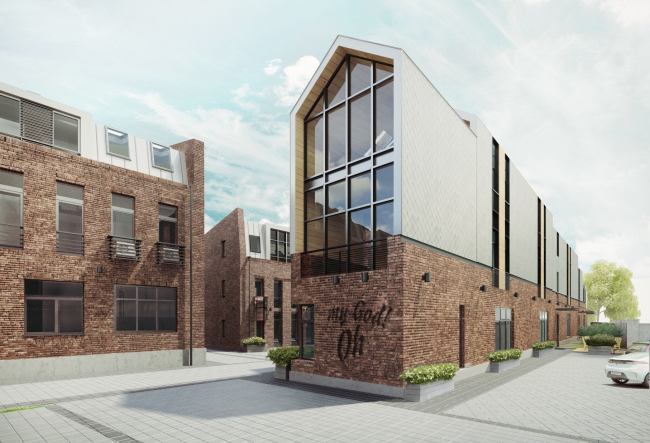