The layout of new project by Panakom closely resembles corals from the last Gucci collection. The architects turned the house into an alien settlement - separate clusters are joined by the rounded hall with a “companion cabin” and “power block” in the middle, each “box” has a way out.

Architecture is called to arrange the area. It seems that this was the authors’ key idea. The house has spread its arms, dividing the large site (1,2 ha) into different park zones. The Garden of Single Tree, the Cherry Garden, the Garden of Hundred Paths – you almost feel the ‘tectonic faults’ between different parts of the territory, looking at the outline.

To the point, on outskirts of Tokyo there appeared a private house with alike broken outline. It has got the award from Architectural Review magazine. But Japanese architects oriented mainly to the nearest views of the sea, and they had a different task. This is not the only house of the client, and he got annoyed with all those stairs. So all the needed rooms are in one level, spread out over the ground. The total area the house occupies is 750 m2. In the middle there is the public zone, there are 2 living and two fitness blocks joined to it from different sides – a kind of space colony. The architects think that this very method allowed them to ‘overcome’ a swimming pool for the first time, which very often becomes an unnatural spring of the main living volume. Here it looks most natural.

Well, with such area, that the house dwellers will have to pass, the interior design had to be various. ‘We have designed an architectural walk’ – says Nikita Tokorev. The stretched hall is divided into a playing zone, bar, entrance hall and so on. The living and public parts are marked with 45cm of floor differential, there are exits outside in different parts of the hall.

Water so natural for corals is signified four times here: the large pond; that ‘defeated’ swimming pool inside, a cupel in one of the terraces and a small swimming pool by banya. The colour of the how is quite of corals – the architects have picked beige-orange color of decoration. Remarkably, the house remains quite unseen actively interacting with the site – more than half of the exterior walls are solid and glass walls of the coral springs are mostly covered with wooden lamells outside. And natural light gets there due to skylight. The largest one is in the living room, and there is designed a small room with a fireplace. This reminds of USSR writers’ old country houses where in such rooms there were libraries. Well, if have a look at other PANAKOM’s projects, done over 2007, it becomes obvious that they are very interested in glass halls on a roof and without any reflections to Soviet times. Lately these ‘lamps’ have almost essential part of the projects. The architects again and again turn second level into a kind of town, so a stroll continues on the roof. You may sit under a tend outside fire-place room or wave hand to those by swimming pool, or watch what is going on in the distributive part of your ‘box’ 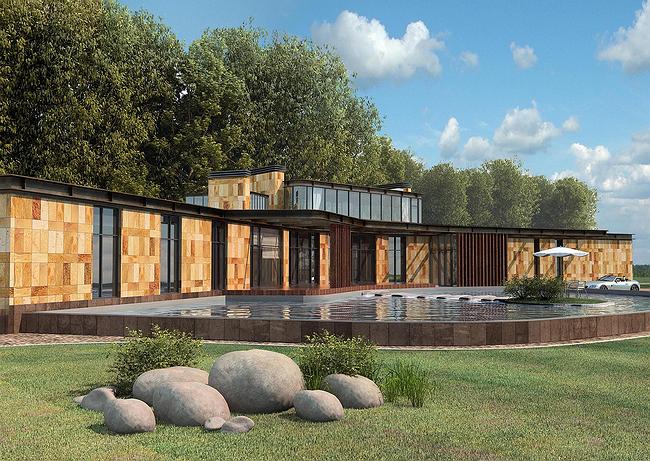 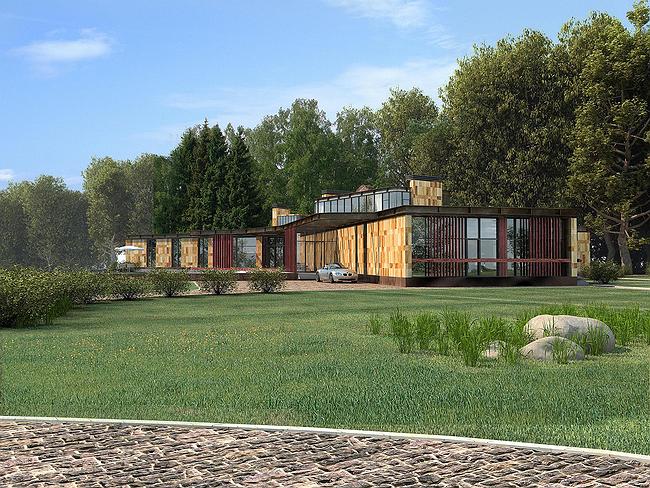 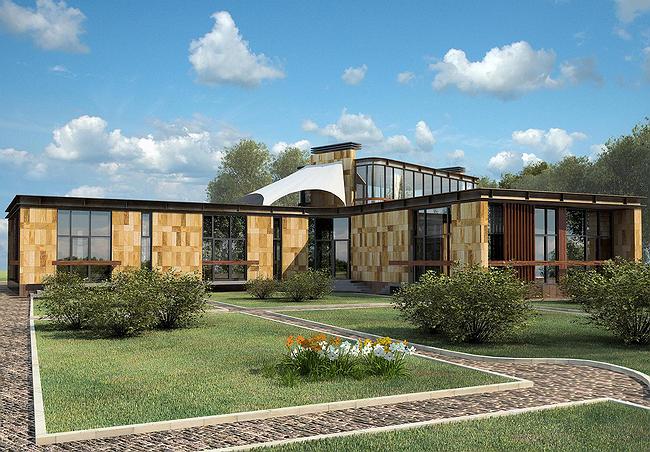 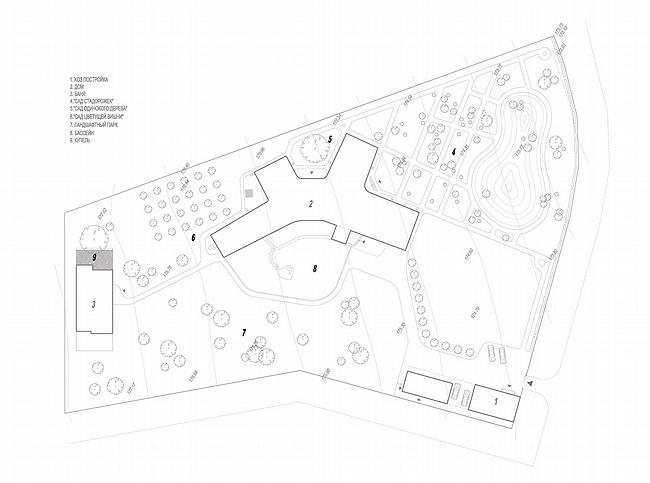 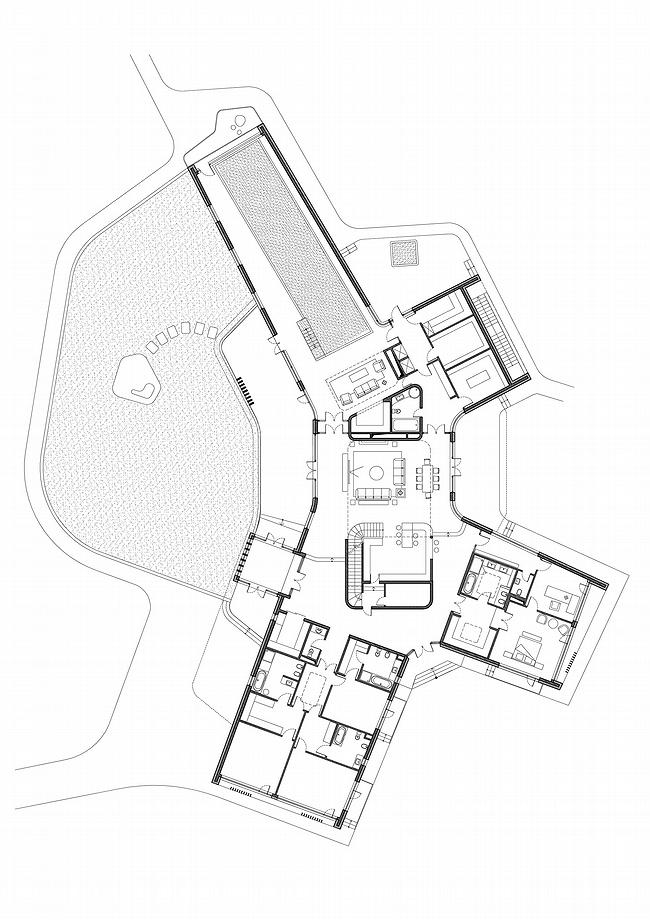 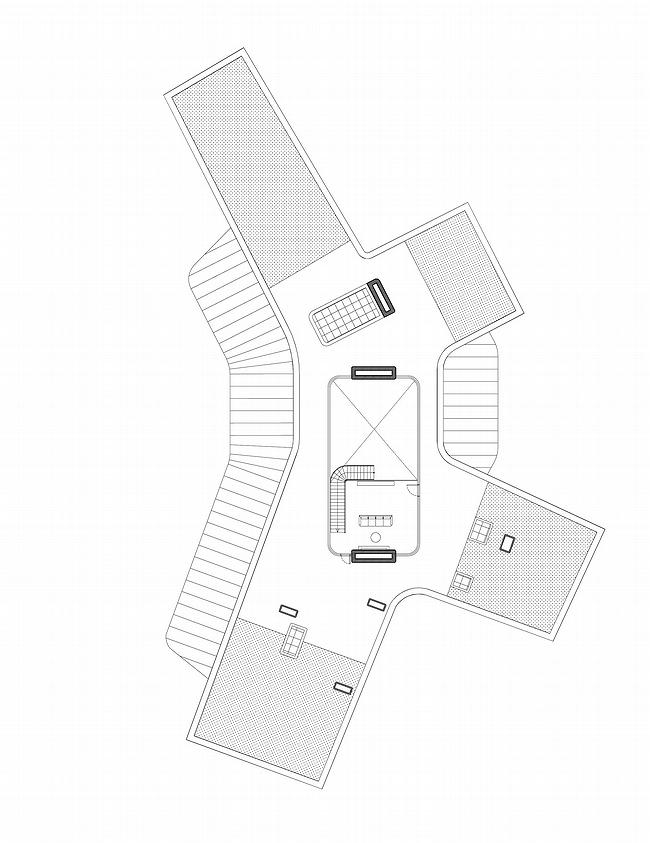 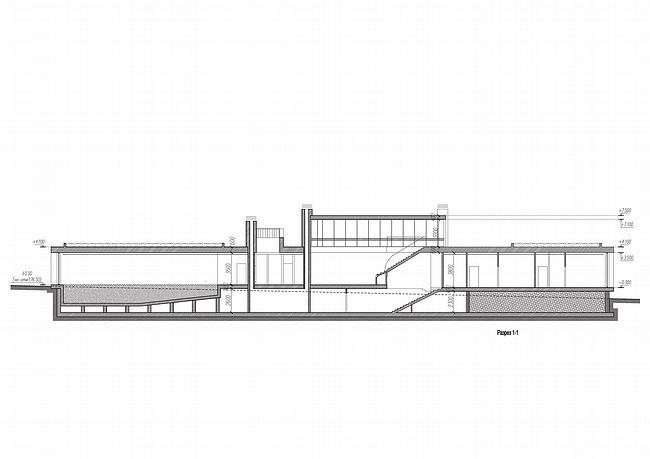 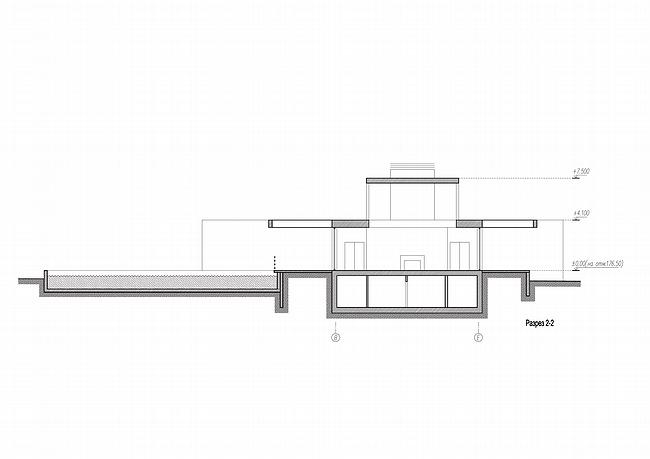