Density as a Style

While he was designing a low-rise district named "Andersen" in "New Moscow" area, architect Vladimir Binderman tried to envisage how this small town would look like if it had been designed by, say, the great-grandson of the famous fairy tale writer.

The land site with an area of almost that is located not far away from the on the bank of the was acquired by the developer several years ago when nobody even heard about the plans concerning annexing this land to city area. And this is exactly why initially it was planned that townhouses and villas would be built here, i.e. the type of housing most suitable and most demanded in suburbs. It was only after the delimited master plan got all the necessary approvals that this territory became part of the expanding capital. The change of geographic status necessitated the change of typology: the developer decided to substitute the integrated houses by three-story lamellar buildings, the latter having to be fitted into the already approved neighborhood layouts. And it was Vladimir Binderman's "Architecturium" Studio that was invited to handle this task.

On the layout, the land site looks like an open hand fan, the outer rounded side of it tracing the bend of the river, and the straight side following the line of the highway. In spite of the closeness to the water, there is no direct descent to it, this being the tall bank of the , and the future neighborhood was to step back from the edge of the precipice. Yet another restriction has to do with the woodland that breaks in, like a green wedge, from the riverside right into the center of the site splitting it into two unequal parts. The only possible solution was to turn this woodland into a developed park - on the one side, this is a definite plus for the future town, but on the other side, giving the area up to the wild nature, the designers had to compensate for the lost square footage by increasing the housing density at the forest-free land plots. And, while in the case of townhouses it left virtually no effect on the quality of the created environment, the three-story housing, crammed into the finely cut segments of the master plan, was threatening to end up as a cramped place devoid of a fair share of sunlight. Vladimir Binderman admits: this was quite some brain-twister. Not having the opportunity to change the configuration of the blocks, the architects had to position the residential volumes with utmost care.

Towards the road, "Architecturium" turned the "П"-shaped sections that, while forming the outside housing front of the district, will provide its residents with cozy little courtyards. In the blocks of triangular shape, the architects only build the lamellar houses along two sides, marking the third side with a single-entrance tower house that also gives the courtyard more of a private feel. Most of the settlement is predictably cut into rectangles, though - "Architecturium" came up with as many as six options of their configuration which is meant to help avoid the monotony of the environment and make the panoramas of the future town more interesting. In the closest vicinity to the woodland, the architects placed the kindergarten; on the bank of the river - the sports fields and the playgrounds. There are, of course, parking lots here as well - they are situated along the outside perimeter of the blocks but casting even a casual glance at the master plan one can understand that the number of parking stalls is barely sufficient. "The increased housing density led to us providing but one parking stall per one apartment - Vladimir Binderman explains - But we really did not want to sacrifice the inner courtyards to make parking lots, simply because courtyards crowded with cars do not make any sense for man". At the end of the day, an out-of-the-box solution was found - while designing the traditional community center located at the entrance to the settlement, the architects gave up three out of its five floors to the parking garage. Due to the fact that the road that runs from the settlement to the highway touches the "fan" but at one of its angles, it is there that the main entrance to the settlement is made. Accordingly, for the construction of the community center, a triangular land plot was allotted, and the architects decided to build a complex of this same shape. Had they acted straightforwardly, though, the "signature" building of the settlement would have stood welcoming its residents and guests with a sharp pointed nose. This seemed trivial to Binderman's team, and not really sensible in terms of providing the maximum useable space of the future building, so the architects made is shape more complex. The triangle that was initially determined by the master plan is formed by a square-section tube that is folded in an ascending spiral in such a way that the main volume gets a fully fledged cantilever above it that faces the entrance. The building can be compared to a coiled snake that is tentatively and cautiously raising its head, but then again, this shape was prompted to the architects not so much by the vicinity of the nature, as by the very function of the building: in fact, it is a ramp that the authors make a skillful spin of. On the first floor of the building, there are stores and services, the next three floors house the parking garage, and in the "hood" of the cantilever there will be a cafe. The facades of the complex are designed in a similar fashion: the first floor has wall-to-ceiling glass windows, the side wall of the cantilever is made transparent, and the main volume, meant for the cars, is assembled from blind metallic panels that are only at some places cut through with the narrow slits of the windows.

As far as the architectural solutions of the other houses are concerned, "Architecturium" had to put in a lot of effort to persuade the commissioner to shift his preferences to the side of the contemporary style. Giving the settlement the poetic name of "Andersen", the commissioner saw the appropriate architecture in his mind's eye: picturesque fairy tale little houses referring you to your favorite pictures from your childhood books. Vladimir Binderman proposed an alternative concept: contemporary Danish houses are arguably the best in the world, so why not imagine that the settlement on the Desna bank was designed by Andersen's great-grandson? All the more so because the very housing density has nothing to do with the aura of the good old fairy tales, while it has a lot do do with how the analogous residential blocks are designed in or . Thus, the sections of typical layout got the characteristic "Scandinavian" design of the facades: combination of dark-colored and light-colored surfaces, window jambs marked in a contrast fashion, inserts of multicolored metal, and the terminally laconic bay windows and balconies. Totally, the architects came up with twelve facade design options which help give individual image to every block. Having persuaded the commissioner to forego the idea of a too-obvious stylization, Vladimir Binderman's team suggested a tactful solution that puts one in the mind of the up-to-date samples of the Danish and Dutch architecture. 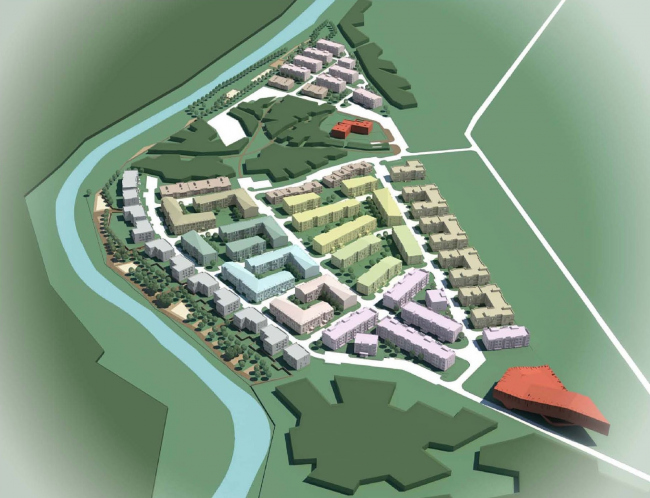 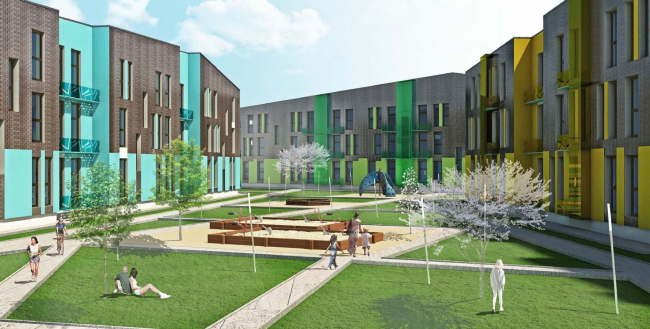 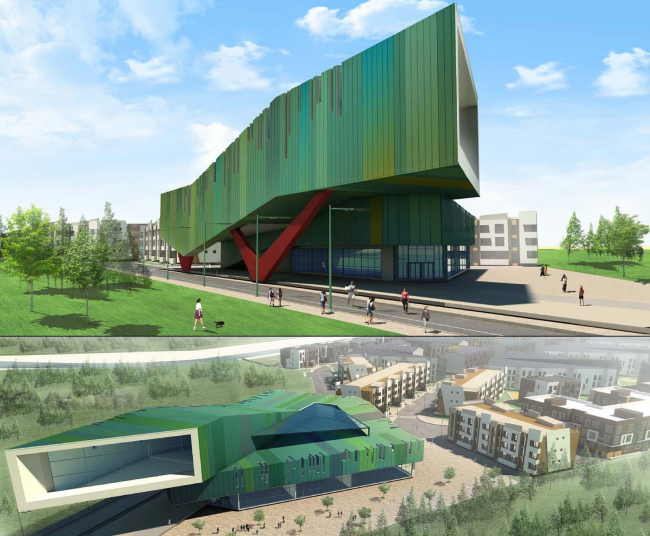 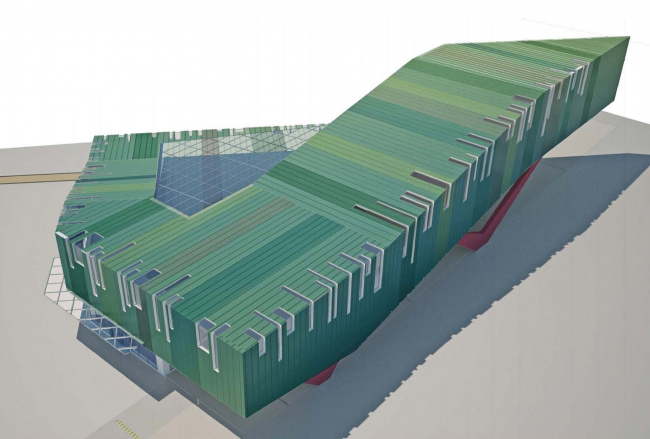 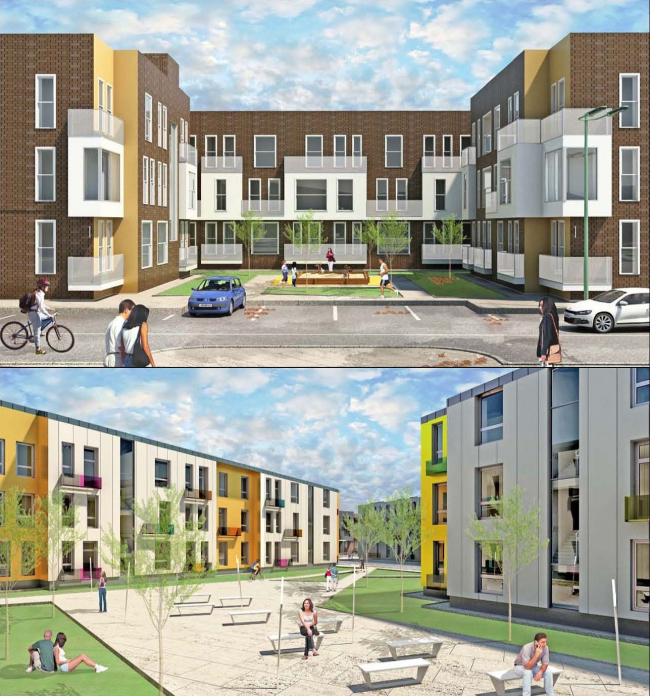 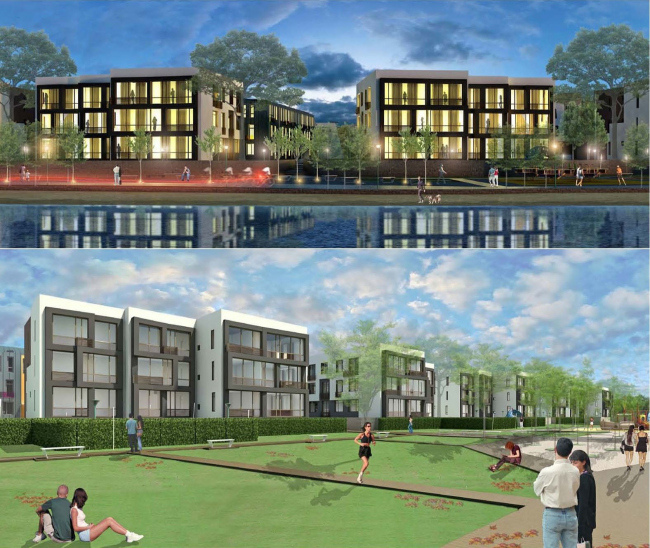