This year, the Saint Petersburg project of "Expoforum" developed by Eugene Gerasimov and Sergey Choban has entered the phase of active implementation. According to the renovated version of the project, the Shushary congress and exhibition complex will get golden facades and impressive parabolic marquees.

The story of construction of a grand-scale expo complex in the city of was covered by Archi.ru back in 2009. Back then, a joined team of Eugene Gerasimov architects and nps tchoban voss offered to the city an elegant composition of several parallelepipeds that would house the expo halls, and the "arch" building that was fully covered in glass of bright shades and colors and looked like a cross between a snake and a bullet train. This version was approved as the main concept; however, in the course of the development of the land site and narrowing the specifications, the architectural and planning solution of "Expoforum" underwent such drastic changes that it now made sense to speak about the development of a new project.

The changes affected not only the architectural image of the future exhibition center but also the provisions of the master plan. At this point we will remind you that the complex will be built in the Pushkinsky district of Saint Petersburg, on the ground of the former "Shushary" state-owned farm: located a ten minutes' drive away from the "Pulkovo" airport, this site borders on the , the , and the residential area that belongs to the farm. It is pretty obvious that from the standpoint of successful development of the expo business the key factor is the proximity to the international airport, this is why the front part of the complex still faces the highway. The way the main territory is used, however, was dramatically rethought and rearranged by the architects.

First of all, the transport infrastructure of the future "Expoforum" was more carefully thought out. While originally the architects placed the pavilions and the congress center on the land site of a square shape one of the edges of which in fact "barged into" the shore area of the lake causing legitimate questions, now the site took on a shape of a smoothed-out trapeze with its edges fringed by automobile roads. The territory of the exhibition center is accessible by two fully-fledged driveways - from the southeast and the northern sides of the land site, the northern crossing with the Peterburgskoe Highway being more developed and presenting a grand-scale flyover, because on this side the exit from the main two-level parking garage is situated. The architects also provided for a traffic circle on the rear side of the complex - it will help to separate more efficiently the traffic flows that are headed to different halls of "Expoforum".

The composition of the complex itself also changed beyond recognition. In the original version of the project, the public and recreation space occupied as much as a third of the entire site - in fact, the whole roof of the underground parking garage was treated as an open-air venue for public events or even for exhibiting airplanes and heavy machinery. Upon a closer look at this idea, however, the architects admitted that the climate of Saint Petersburg is not exactly conductive for organizing frequent auto or aviation trade fairs, and this is why the land site is now filled with buildings almost completely: instead of a giant windswept "marching ground" there appears a system of wind-protected squares, courtyards, and little streets. The function of the centerpiece of the composition is still performed by the covered pedestrian passage; now, however, the buildings of the exhibition center are evenly spaced on its either sides, so on the layout "Expoforum" looks like a tree pictogram with branches shooting off its trunk.

As far as the functions are concerned, no significant changes were made to the project. As earlier, "Expoforum" includes the expo, congress, and business centers, 3 and 4-star hotels, as well as a freight forwarding unit and the engineering infrastructure facilities without which launching such a massive organism into operation would have been impossible. The congress center, the hotels, and the two business centers are joined together and placed in the front housing line - one can say that these are the magnificent upper branches of that "tree" and the main facade of the entire "Expoforum", its "face" that will welcome the visitors coming down the . Perpendicularly behind these buildings, there are the expo halls. "Ultimately, these halls are nothing more than plain hangars - simply because nothing more effective has been invented so far to serve the expo functions - Eugene Gerasimov explains - The only novelty that we introduced was breaking them up into separate segments. They used to be simply huge but now their area has shrunk while their numbers have grown". Analogously, the "snake" building from the previous project was fractured: each object of the first line can function independently - this helps to make the construction priorities as convenient to the investors as possible, as well as to provide for more effective and efficient operation later on. By the way, about the construction priorities: first, there will be built the buildings of the first line and three expo halls out of six, while the above-ground parking garage will be placed on the territory that will later on be used to build another three expo halls (the parking stalls being moved underground).

And, while originally this facade was facing the highway with rainbow colors, now the complex is designed in an entirely different way. While the golden casing is still there, the architects change it from a uniform coating into a net with cells of different sizes. Interesting is the fact that this is not rigid orthogonal grid - each cell sports rounded, as if melted, corners (at one of the facades they even turn into windows of a completely round shape), which serves to soften the rigid geometry of the buildings and makes them look very much like the good old punch cards. The theme found by the architects is both winsome and unobtrusive; it is more than appropriate in the buildings meant to showcase the achievements in the field of high-tech solutions. The arch also survived into the new project, although, while it was a pass-through one and served the function of the entrance gate to the territory of "Expoforum", now the characteristic parabolic shape was given to the marquee of the north entrance. It is perceived as a golden sail whose edges are drawn down to the ground, and the main canvas is spread out by the gusts of wind.

For the other facade, the architects also chose the golden amber color. According to Eugene Gerasimov, there were several reasons for the monochrome solution. First of all, the architects needed a more reserved tone, one that would "pull" together the composition of various volumes, and at the same time one that would not leave a "mottled" or "overcrowded" impression. Second of all, this very tone was the perfect choice for adding some "flavor" of 's classical architecture into the image of the new complex - the photos of its most famous buildings will be photo-printed on the ceramic panels of the expo halls' facades. In fact, the whole facade will turn into a giant canvas that is broken by slightly-less-transparent verticals of the galleries and overpasses into separate segments, each of which displays a theme of its own. One can see the Bronze Horseman, the , and the Arch of the Joint Staff in here - when viewed from the road, the pictures will change like the frames of a movie, or rather, and this comparison will be even more appropriate for , canvases in an art museum. The museum association is enhanced by the color of the coating that the architects chose - it really looks like a golden frame of some work of art, but then again, the pictures that are there on the ceramic panels get the hew of an opaque sepia that we often see on the old photographs and in the old movies. EXPOFORUM. The first version of the project © SPEECH, Evgeny Gerasimov and Partners 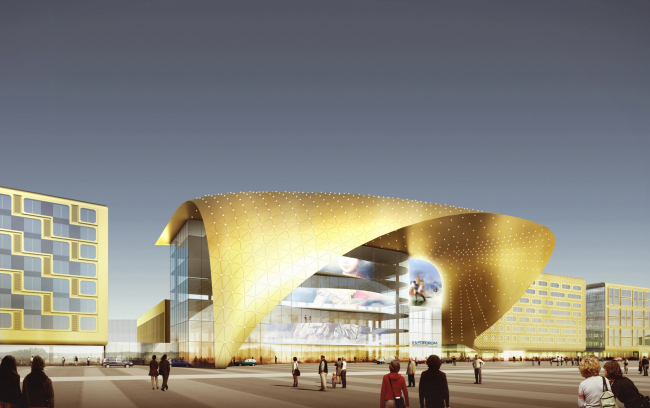 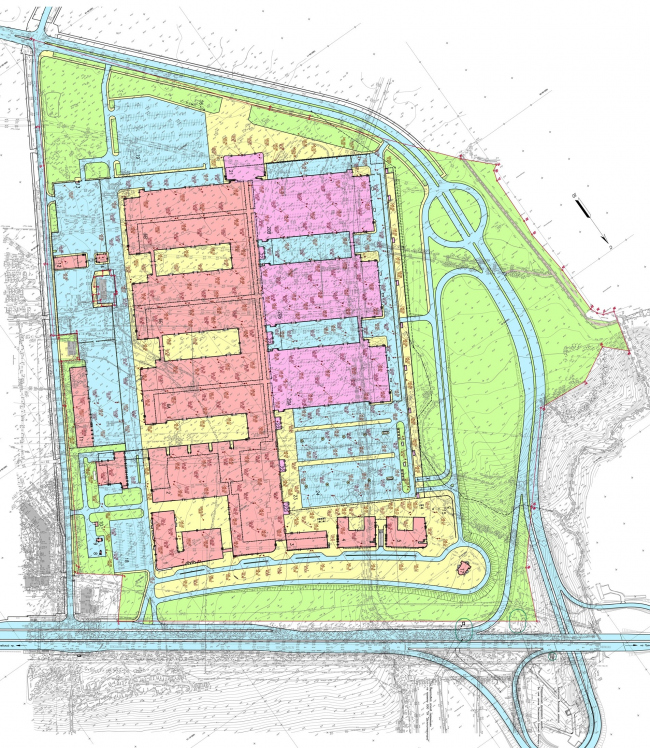 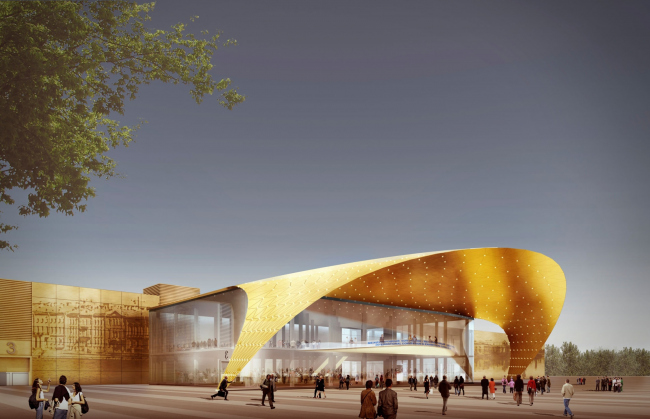 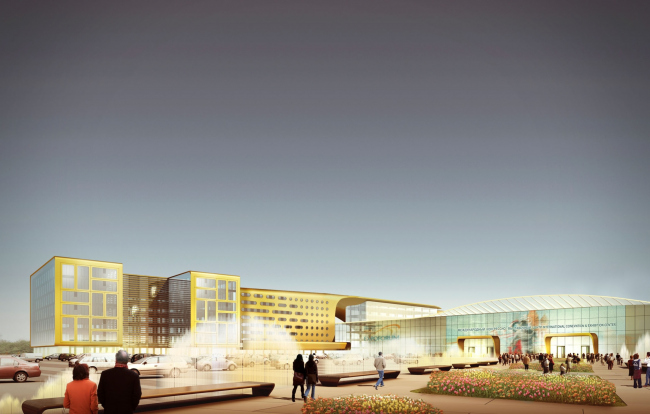 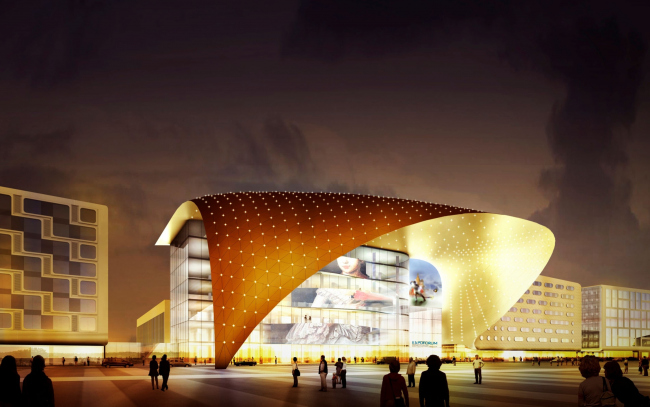