Yards behind a Wall

In the center of Kronstadt, architectural office "Studio 44" is designing a new residential complex. Bordering on the architecture monuments protection zone, the new project develops the principles of historical town-planning of this fortress town.

The land site allotted for the construction of the residential complex is located in the central area of Kronstadt, between Surgina, Zosimova, and Martynova streets. Up until 2005, this place was owned by the automobile operating company GATP-24, and then this area patiently waited for an investor. In 2011 it was bought by "KVS" company that invited "Studio 44" to take part in the project. The developer explained his choice in the first place by the fact that the team of Nikita Yavein has a tremendous experience of doing residential projects in the historical centers of various cities. For Kronstadt, this criterion was more than vital: right next to the future residential district, heritage buildings are situated, and the complex itself is to occupy the protected area, so, long before the new residential complex ever came into being, various restrictions were put upon it. In particular, the height of the buildings was not to exceed , the length of the street facades was not to exceed , the roofs were to be of the pitched kind, and the overall compositional design was to be in harmony with the immediate environment. Among the nearest surroundings, the stands out in particular, one of the oldest in Kronstadt, made up of 2-3-story buildings. As Nikita Yavein explains, these volumes are of doubtless value thanks to their authenticity but are at the same time capable of scaring anybody off by their brutal and down-home look. This is why, taking into consideration the "scale of the environment" that was set by these houses, the architects nevertheless decided not to follow their aesthetics to a letter, and turned to them the firewall of one of the three buildings of the new complex, which they executed in the shape of an elongated rectangle. By doing so, the authors fenced off most of the land site - the appearance of this "partition" of sorts let them make the most of the remaining area. To the "splinter" building, they draw two "П"-shaped buildings, thus getting two closed yards and one yard open to . In fact, the designed residential complex is a double square united by the already mentioned building deep inside of it. The latter has a tall earth-table, and the two courtyards are raised above the ground.

"Such a layout seemed to us to be the simplest and the most efficient thing to do to provide the necessary differentiation of spaces - Nikita Yavein explains. - Through the middle yard, we put a passage to the more comfortable large-area apartments. Inside the courtyards wide, there will be the recreation areas and playgrounds for the inhabitants of the buildings, as well as the individual front gardens belonging to the ground floor apartments". The idea of townhouses being included into the complex was prompted by those same restrictions that the architects were faced with - the low-rise and relatively "stretched" facades were just asking to be extra-fractured, and the authors decided to make this solution not only visual but functional as well. Thus the two inner buildings got apartments with an area of over - these are situated at several semi-levels and have separate entrances as well as surrounding grounds of their own. The outside perimeter, on the other hand, is made up of economy-class small-area apartments - mainly studio and two-room ones. Designed in such a manner, the residential complex presents a rather saturated and rigorously organized structure with a barely sensible resemblance to a fortress or a military barrack. For any other residential complex built for any other city, this comparison would have hardly been flattering but for Kronstadt, founded by Peter the Great with strictly military purposes in mind, it is not only appropriate but also it testifies to the maximum harmony between the new complex and the environment that it enters. The architectural solution serves the same purpose: all the residential houses are facing the red lines of the block; the main facade is executed as a symmetrical three-part one. The street facades as well as the yard facades are finished with bricks of two shades of red, thus getting the color scale that makes them even more akin to their immediate surroundings. The earth-table is coated with slabs of "Putilovsky" stone, and the pitched roofs are made of metal. What is interesting is the fact that in both of the two "П"-shaped buildings the upper "stroke" is a little longer than it should be, and the authors finish these "protrusions" with rather massive rectangular bay windows and triangular gable ends. Such "houses within a house" fix the outside corners of the complex, that are turned in the direction of the crossroads. Just as the solemn portals of the entrance group, painted white, these elements enrich the plastics of the stretched facades, making them more dramatic and stressing their modern, or rather "postmodernist" origin. The inside "yard" facades look lighter at the expense of wide "niche" recessed balconies and wall-to-wall glassing of the stairways - by doing this, the architects tried to visually expand the stretched courtyards. And, while in the architecture of this complex, as was already said, some "militarist" flavor is quite appropriate, the last thing the authors wanted to do was to make the courtyards look like drill grounds - by using green planting, paving, and other improvement techniques they gave the inner space a friendly and memorable image of its very own. 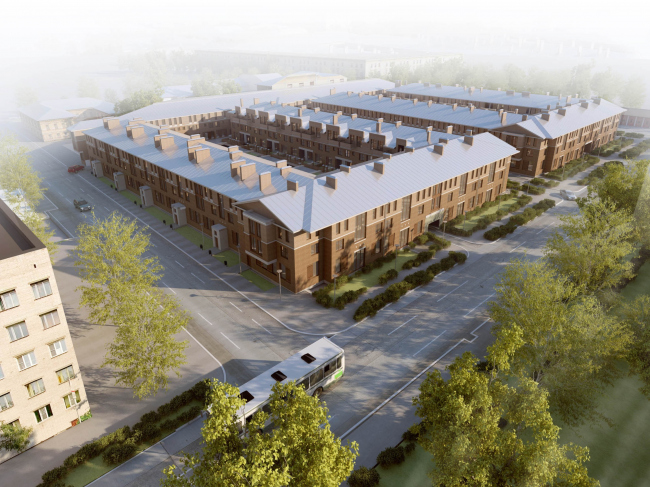 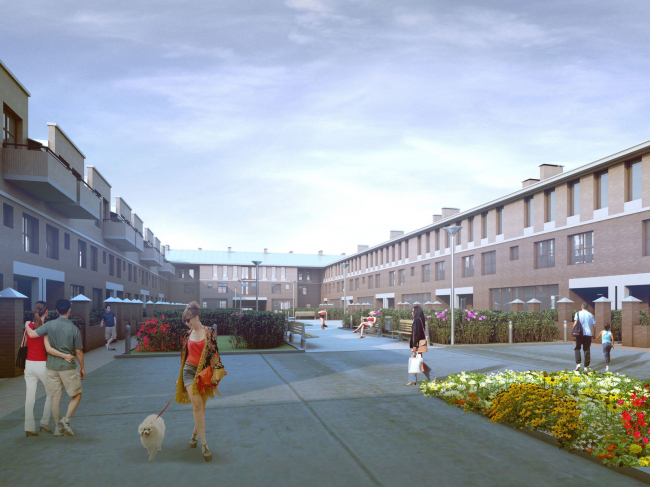 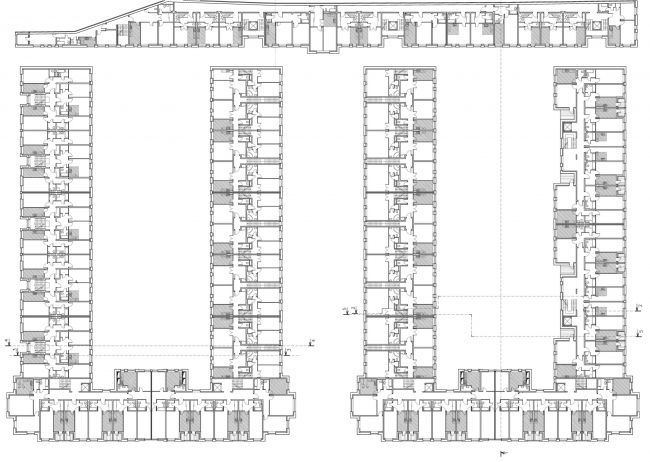