"Express-House" built by Gary Chang and Totan Kuzembaev in Pirogovo resort is a project that evolved from a quick-mounting pavilion up to a fundamental structure.

Initially, "Express-House" was designed by the Hong-Kong architect Gary Chang who was invited by Totan Kuzembaev to take part in designing "Pirogovo" resort back in 2005. is the master of transformations - in the "Commune by the Great Wall" he built the most winsome "Suitcase" hotel, and, having come to area, he decided to carry on with his exploits in this particular genre. Due to the fact that the initial task was to create not so much a house as a show room, the architect came up with a project where not only the interior could be transformed but the entire building could be transformed as well. Hence the name of "Express" (although initially proposed to call it a "Matryoshka") - in this house everything was easily taken apart and put back together again in accordance with the visitors' needs. The Gary house was in fact a box, each wall of which could open up, so the building virtually merged with the environment, while the inner premises (for example, the staircase leading to the second floor, the bathroom or the closet) would turn into pylons, around which one could walk like he would walk around the park. An even more interesting solution proposed for the furniture - it was "packed" into a special transformable module consisting of several cubes put inside one another - these would emerge out of the house on rails and unfold into a table, a bed, and even a spa.

In this aspect, the project enthralled the connoisseurs of the contemporary architecture, including Alexander Ezhkov, who dreamed of implementing 's idea in "Pirogovo" and make the "Express-House" one of the symbols of the resort. These ambitious plans were checked by the global economic crisis - implementing all of Gary Chang's ideas proved to be a task not only challenging but expensive too, and this is why the idea of building a pavilion "for everyone" (and season-adjustable, too, because it's obvious that in the wintertime the couch and the spa on rails are not really on the top of the needs list) - this idea was soon forgotten, and the project of the Hong-Kong architect found a new commissioner. The pavilion did not satisfy him as a place of permanent residence though, so it was now necessary to reconsider the entire project with the consideration of its new function, so it stood to reason that this work was commissioned to Totan Kuzembaev studio that had supervised the project from the very start. "At first we communicated with Gary rather actively on this issue, but gradually it became clear that adjusting the house for our climate and making it a place of somebody's permanent residence would incur some really radical changes, so we decided to carry on with this project unassisted", - the architect reminisces.

Starting his work on re-doing the "Express", Totan Kuzembaev tried to stick as much as possible to the principle of universal transformability that lies at the heart of this project - if not for the outer walls, then at least for the interior spaces. The overall composition was also preserved - the house that looks like a laconic rectangle on the layout, is augmented by a large terrace, again, of a rectangular shape. In the initial project, it was this "ship deck" that the pieces of furniture would proudly ride on, and initially Kuzembaev gave up only on the idea of the guideways - the terrace presupposed an open-air swimming pool, and on the south side it was equipped with a mobile fence; still more options were designed for the interior premises of the house. For example, one could get down into the basement by shifting out the floor panels of the first floor, and the double-height space of the living room could be transformed with the help of the mobile panel that formed a second level with an extra bedroom, and with the help of the folding stairway provided access to the roof area. Regretfully, after the final cost sheet was drawn up, the commissioner considered even these "half-measures" too expensive, so the architects had to reconsider their project yet again. "Now it was clear that there was only one way left to make it still less expensive - by replacing all the transformable elements with fundamental ones - Totan Kuzembaev says, shrugging his shoulders - and so it turned out that two stained-glass panels in the living room, one of which was turned eastward and the other westward, turned into nine standard glass units grouped vertically into threes, the mobile panel was replaced with a fundamental floor deck of reinforced concrete; the folding stairway gave way to the usual one that connects the first floor not only with the second one but also with the accessible roof area. And because the new stairway in fact runs through the building, inscribing it into the original dimensions was quite a tall order - but the architects found a compromise by partially taking it out of the confines of the main rectangular volume. The laconic shape of the box was thus made a little more sophisticated - it looked as if the architects cut its south facade in the middle and bent out part of the wall, thanks to which the house got a diamond-shaped bay window turned westward and to the water. At the same time it is cut into the main volume in such a way that the "bulge" is reduced to minimum and plays rather a decorative part, signifying the house entrance, while over the flat roof, on the other hand, there is a small gazebo-turret that is the perfect spot for contemplating the vistas of the .

Accordingly, the floor deck is dissected in such a way that the second floor gets a fully-fledged balcony of its own. It rests upon square-section columns, the architects providing not two but even four rests, so the terrace gets a deep niche - visually, it is that same depot out of which the transformable furniture would exit in the original project. Incidentally, it is this awning that the spare furniture is actually stored under - sofas and armchairs. No more guideways are there of course, and the furniture pieces are not of the folding type but they can still be spread over the "deck" with no problem. The railings of the balcony, just as the railings of the accessible roof area, are made of transparent glass and thin metallic truss rods that in fact make these constructions invisible - when viewed from a side, this house, coated with wooden panels, indeed looks like a set of boxes placed on top of one another. One gets a feeling as if the whole structure designed by Gary Chang got arrested while still partially taken apart - even though the architects had to forego all the technical intricacies, visually Totan Kuzembaev was able to implement the transformer idea even in the fundamental structure. 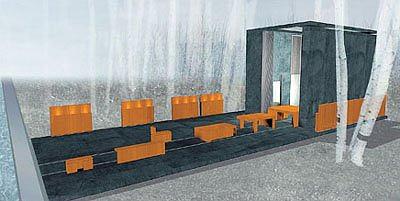 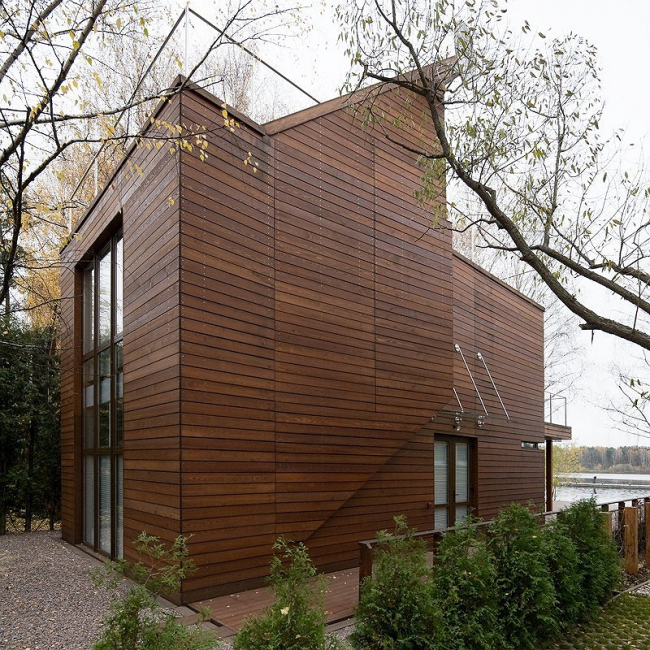 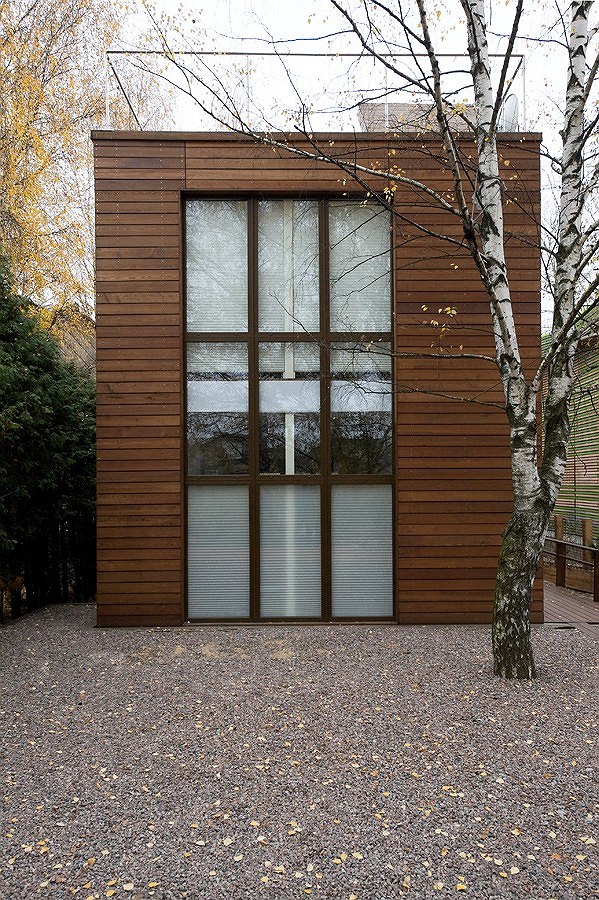 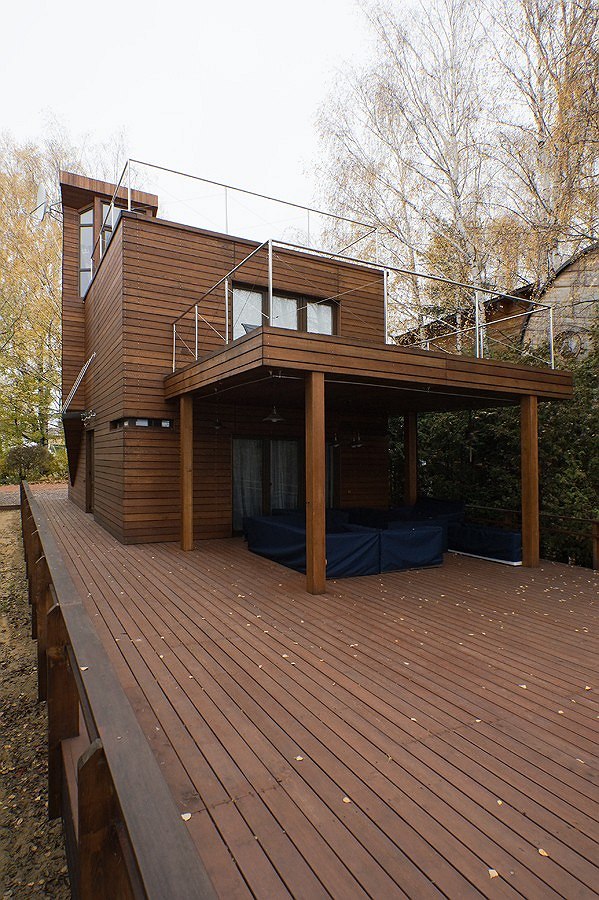 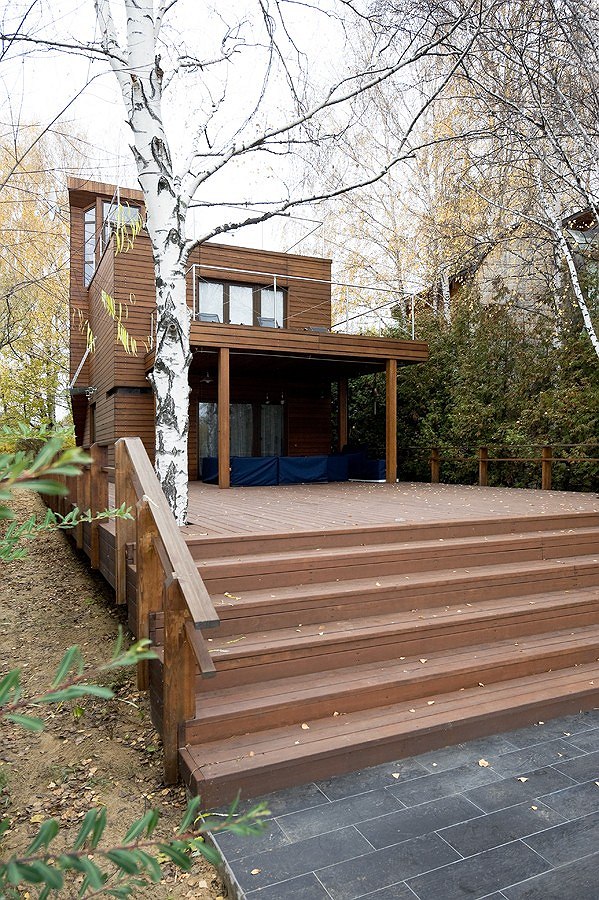 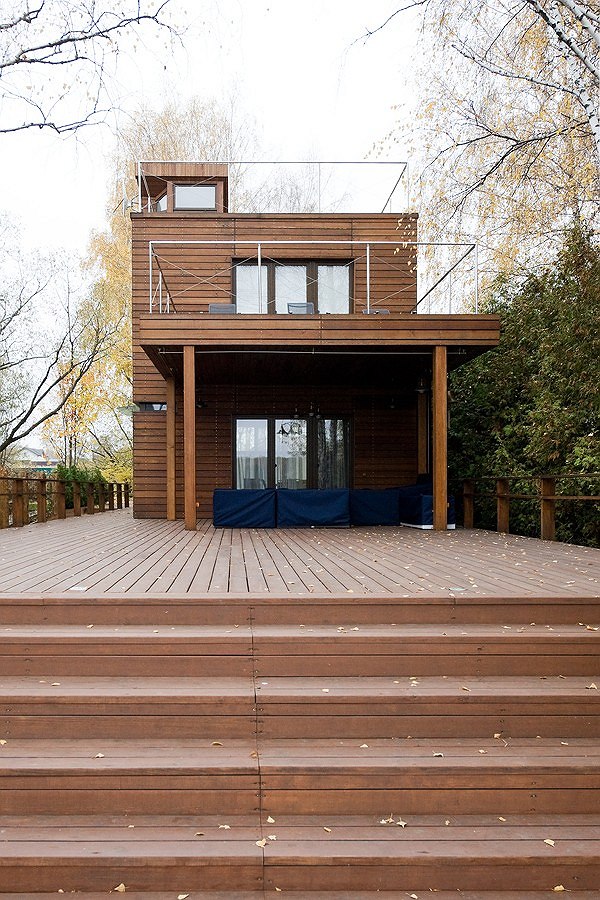 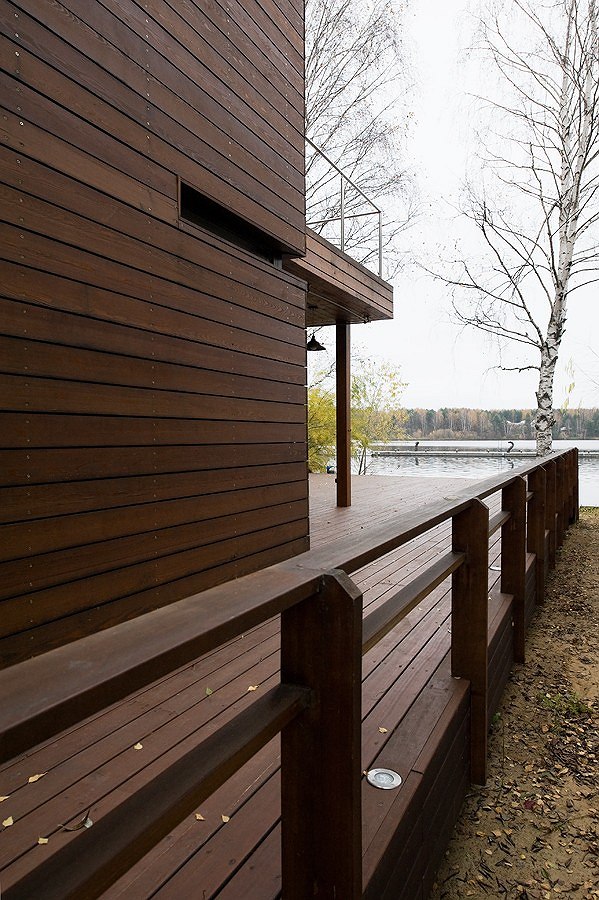 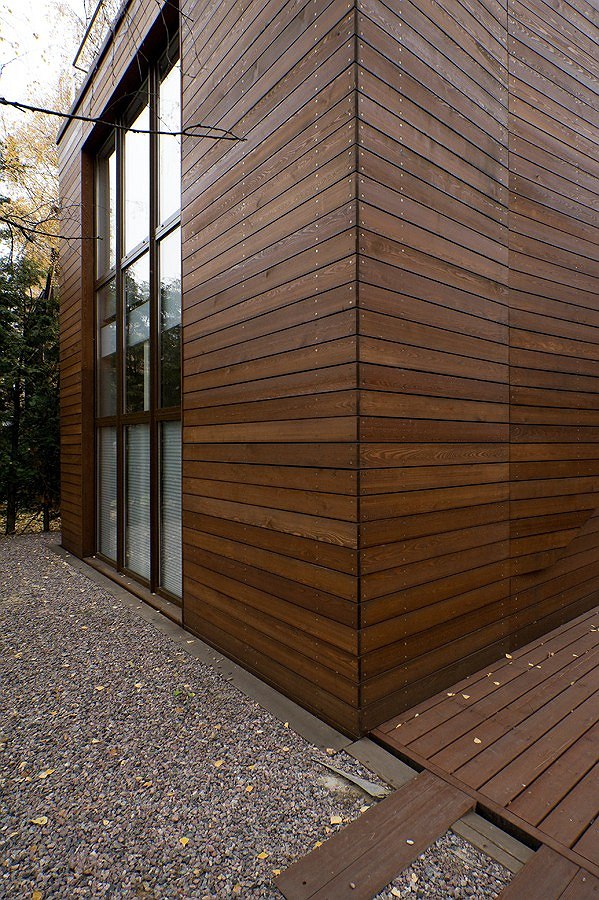 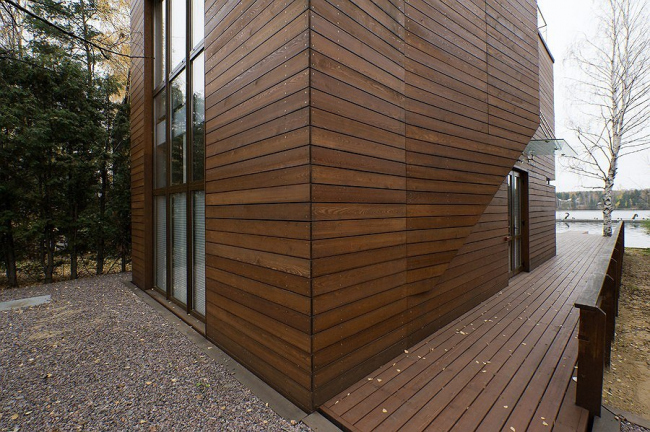 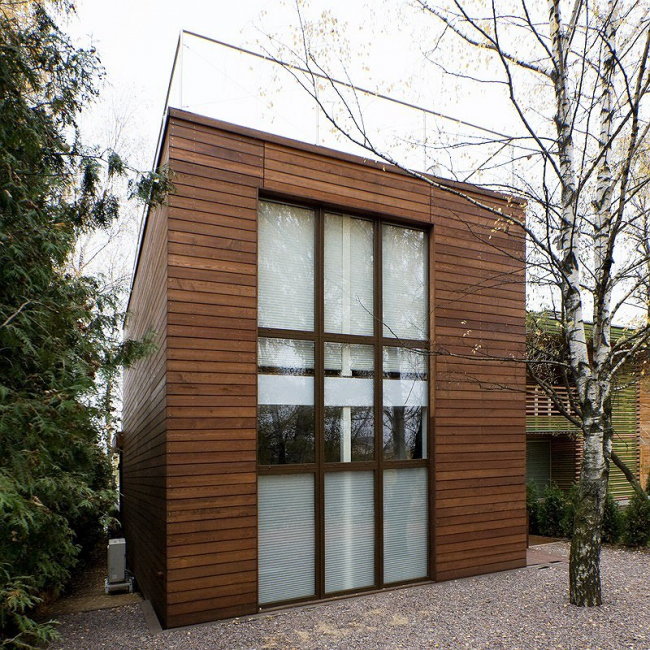 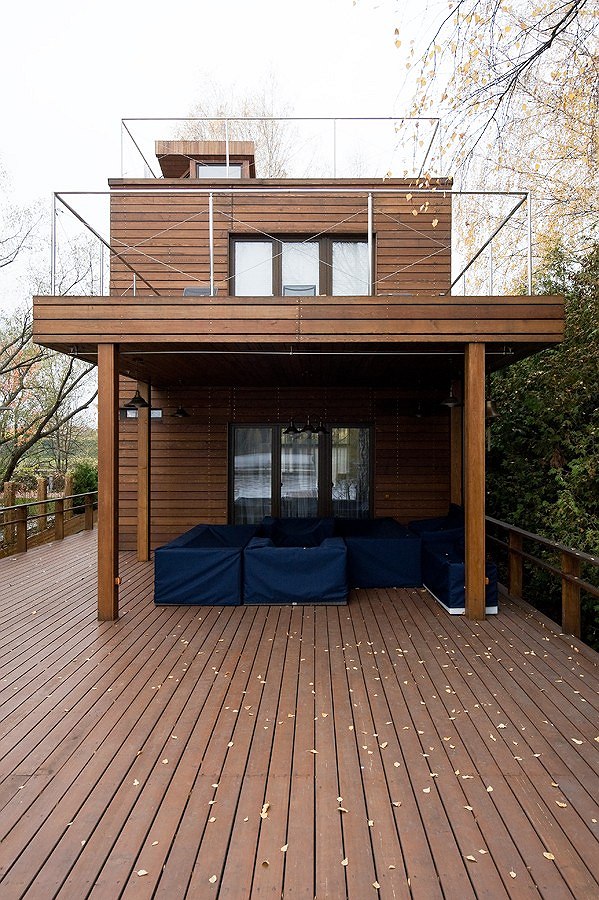 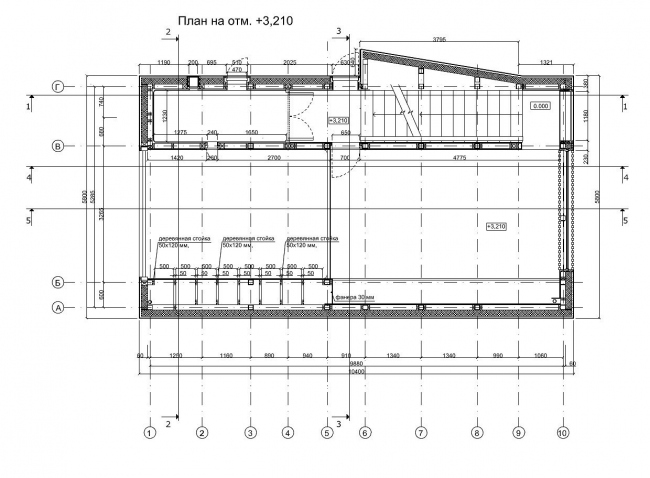 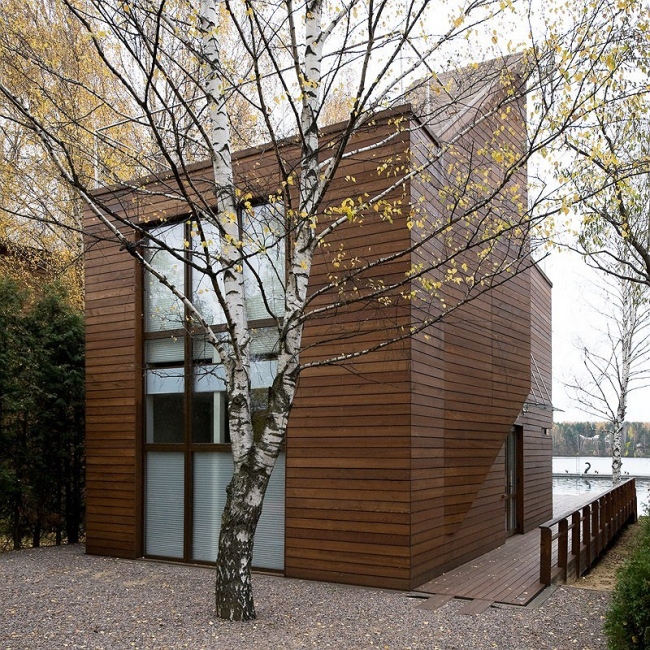 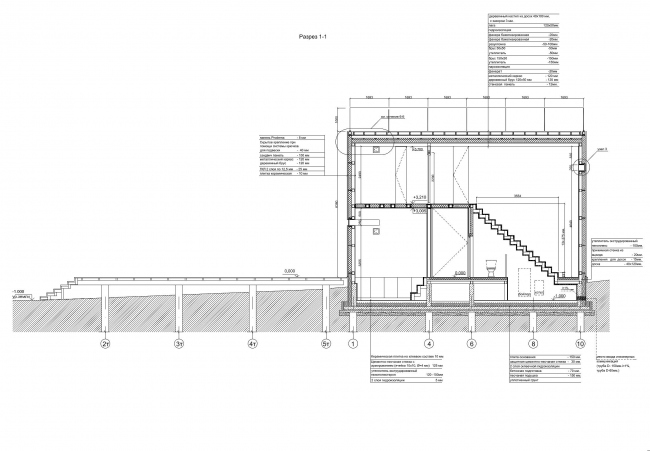