This spring, Creative Production Enterprise “Reserve” won the tender for designing a residential complex in Moscow’s Preobrazhensky district. The complex that is going to house over 900 apartments is treated by the architects as one that consists of two self-contained independent green compounds.

The architects tried a multitude of different options of arranging the living volumes on the plot that has the shape of a trapeze with one of its squares rounded. The first and the most obvious choice was to build along its perimeter but that would have inevitably led to the new complex falling out of proportion of the surrounding houses. After that, the architects tried to place the houses in the “staggered” manner – the result was rather effective but it left the architects devoid of any possibility to make fully-fledged courtyards that are just about the only way in the megalopolis to give the huge apartment building an atmosphere of coziness and security. The similar limitation was shown by both linear and discrete housing when the architects would scatter over the land plot a dozen of separately standing towers, which left the place devoid of any conceivable identity. And this is how “Reserve” again ended up with the idea of building in blocks.

The trapeze of the plot got split into two conditional halves, inside each of which the architects designed a rectangular-layout house with a large courtyard. The perimeters of each of the two houses are opened in such a way that they enter into an obvious dialogue. Between them, the architects design a wide boulevard, over which, on the seventh-story height they flung a few pedestrian overpasses - thanks to this the two tall buildings will not look as if they are standing to close to one another and will not meld against the cityscape, at the same time looking a doubtless couple, and not some volumes that were built next to one another by sheer chance.

Thus, on the land plot, there appeared two rectangular layout houses, four hundred plus apartments each, and two large, also rectangular, courtyards for their tenants. Vladimir Plotkin would not have been himself, however, if he had not been able to make this simple and terminally rational layout grow into a volume that is as original as it is visually striking. First of all, instead of filling the parallelepipeds to their fullest, the architect raises them above the ground on the supporting elements and pierces them with arches and niches of various width and height. This serves to both improve the insolation of the apartments and to visually fracture the massive planes of the facades, as well as to stop the courtyards from looking as if their walls were closing in. The idea of even finer fracturing is introduced with the help of the so-much-like-"Reserve" vertical lamelli that alternate with blind inserts here. What is peculiar here is the fact that for each of the floors the architects developed a unique combination "narrow stripes / wide plaques", and the floors are separated from one another with the horizontals of the floor decks, which helps to maximally diversify the pattern of the facade and enrich it checkered light and shade. What is interesting here is that only one of the two buildings is going to be finished in white color that is traditionally associated with lamelli. The other building is going to be finished in red, this red not being the pastel fake-brick tinting but the very screaming color of the fire engine: such a couple will hardly go unnoticed. In the panorama of this neighborhood, this residential complex will doubtlessly become a strong color accent, and the adjacent streets of Bukhvostova and Krasnobogatyrskaya will look like the are basking in its brightness.

Getting back to the solutions of the masterplan, one should definitely mention the fact that the houses are not situated strictly opposite to one another but with a little shift because the architects are placing them diagonally and alongside . Consequently, between each residential parallelepiped and the street running sidewise, there remains a triangular buffer area, and the architects fill this space with low-rise volumes of shopping galleries and cafes that will serve both the complex and the outside city as well. The roofs of these buildings will be completely covered with green planting, which means that the apartments with windows opening up to , will be protected from the noisy street by a green buffer. From the opposite side, the residential complex will border on yet another green area - a few athletic fields and a kindergarten, whose courtyard is also supported by a green "belt" on the outside perimeter. The territory that continues the theme of the flowing green space will become not only the place of the active leisure of the under-fives but will significantly improve the view opening up from the apartments. 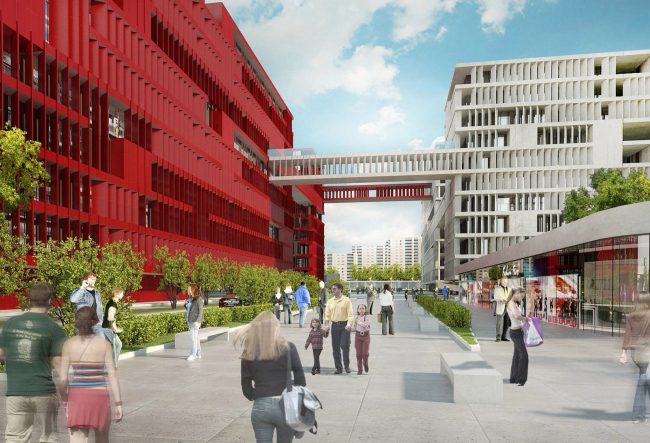 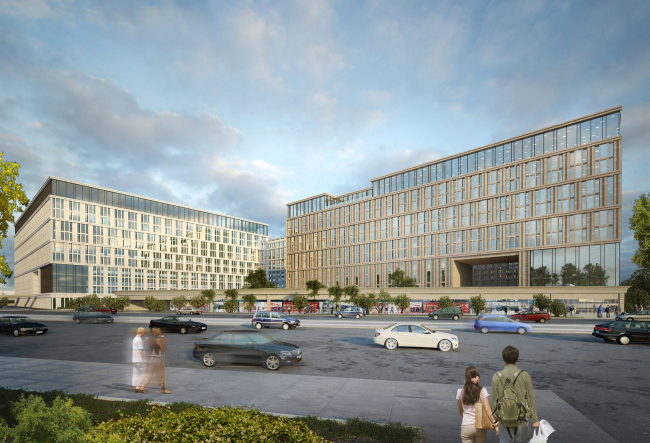 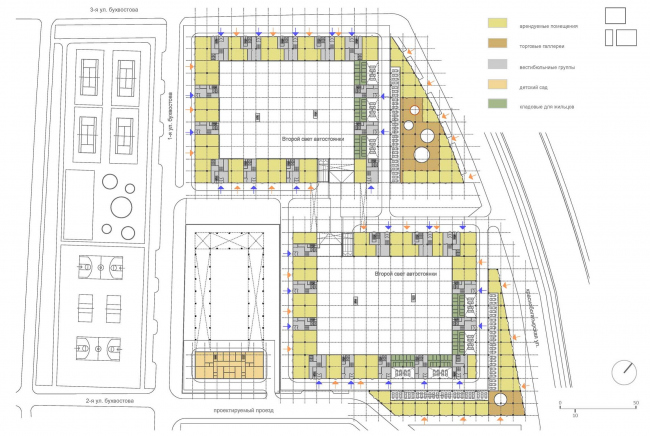 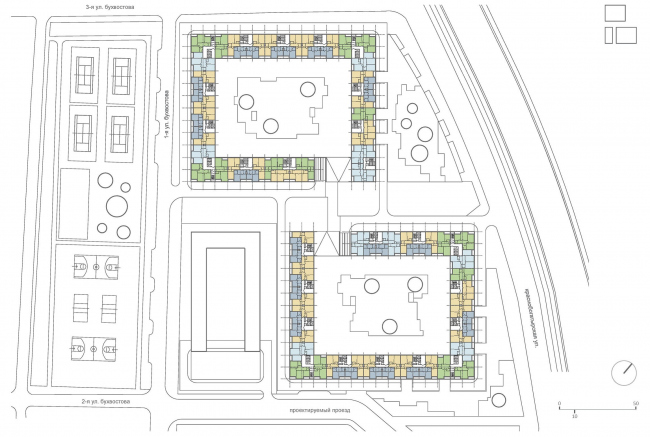 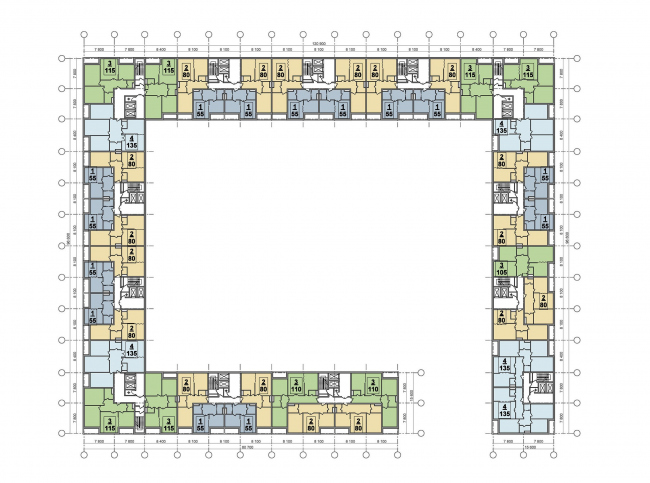 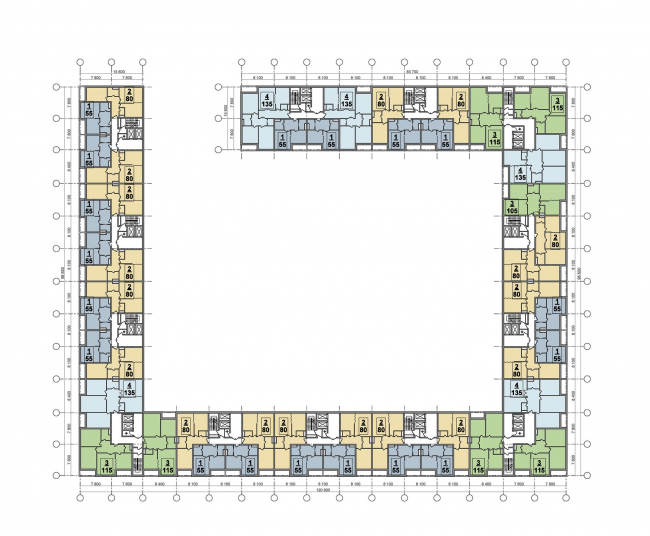