At the commission OAO “Roszheldorproject”, “Studio 44” architectural workshop developed generic proposals on reorganization and renovation of train station complexes of three resort cities of Krasnodar Territory at once – Tuapse, Lazareskoe, and Khosta.

The most large-scale project of all was developed for the city of – it is expected that it will be implemented in two stages: before the Olympics 2014, all the tracks and platforms will be reconditioned, and in the post-Olympian period the railway station building will be renovated, and new commercial facilities will be built. The building of Tuapse train station, built back in 1952, is an object of cultural heritage of regional importance: this is a rather imposing edifice in the vein of “Stalin” style, with its main façade turned to the landside area and . According to "Studio 44", it will keep its role as the centerpiece of the train station complex.

On either side (left and right) the historical building will be flanked with new "wings" - two groups of buildings stretched along the railway lines. In these buildings, there will be shops, restaurants, Internet cafes, and leisure and service institutions that the architects propose to disperse over several low-rise volumes rather than try to squeeze them into one bulky building. Spaced out with picturesque pedestrian passways, these pavilions will form a kind of "shopping quarters" with a comfortable human-friendly medium. All the shops and cafes will be placed on one single stlylobate stretching from the landside area down to the passenger platforms. The architects are deliberately leveling off the upper marks of the stlylobate with the platforms - this will give them the opportunity to make enough parking places in the basement. The passenger platforms, in turn, will be equipped with sun and rain-protecting awnings that will also visually "pull" the various volumes together into one uniform composition.

The building of Lazarevskoe railway station, on the other side, is not an architectural monument but the architects still render homage to its architecture and its charm. Deciding to keep the building virtually intact, the architects based the renovation project of Lazarevskoe train station on the idea of an old picture set in a new frame. The structure of the new train station facility looks indeed a lot like a frame: like in the previous case, two buildings are situated on the sides of the historical building, linked to one another with one common roof that hangs like an awning above the old station and part of the landside area.

Yet another planning scenario was prepared by "Studio 44" for the settlement of Khosta. The thing is that the railroad station of this settlement is situated in the dead end of under the Khostinsky pipe bridge that also serves as a highway overpass. The existing building of the railroad station practically cannot be seen from the outside because its view is almost completely blocked by the houses of and the overpass. Apparently it is because of this that the architecture of the existing station is of a strictly utilitarian character; in fact, it is only a part of two transport facilities. Taking the existing building apart, the architects are proposing to fill its place with a longer and more sizeable volume that will follow the outlines of the highway overpass. Due to the fact that it is at this spot that the bridge makes a visible arch, the building also takes on an arched shape, and it is this expression of movement, conditioned by the giant construction, that becomes the main theme of this architectural solution. The train station complex here presents a minimalist volume faced with glass and wooden panels that are decorated with thin horizontal stripes that distantly echo the trains and cars zipping by. 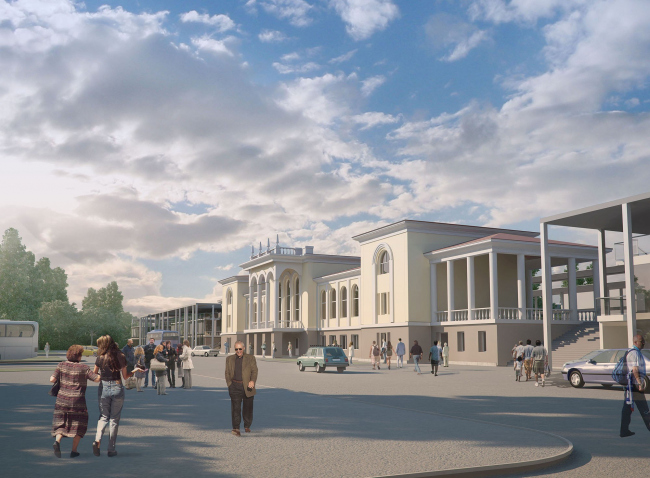 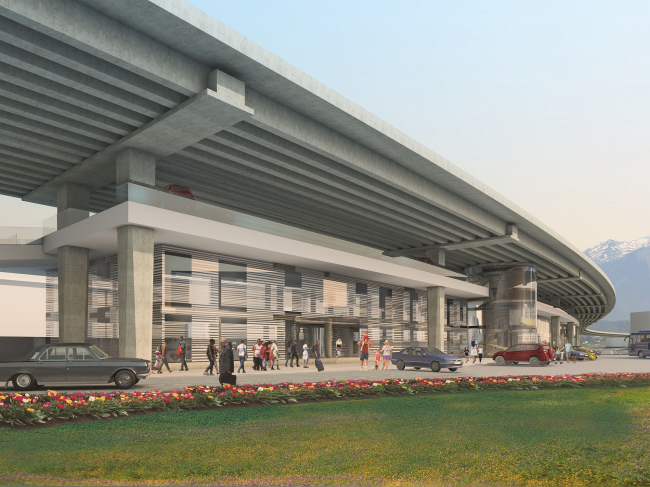 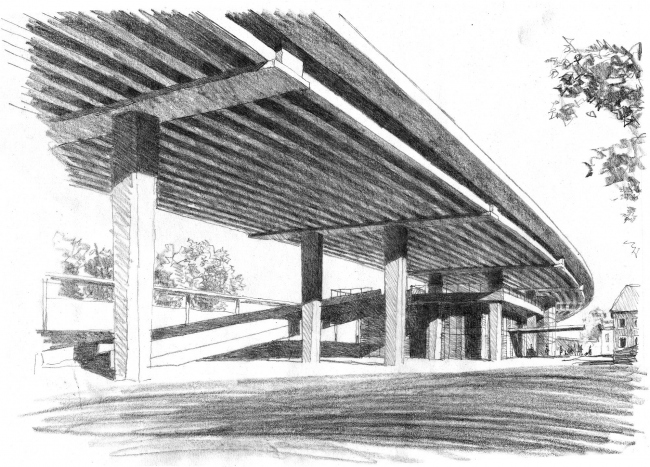