Exclusive architecture is a significant trend, affecting the real-estate appeal, consequently, demand and prices. Very likely, this was the main reason for the client of architectural bureau PANAKOM to commission the architects to design the three houses on the bank of the ornamental pond in the Nikolskay Sloboda which they are selling. The lots are being sold without a contract, so in the result, among huge palaces and log constructions, there can be found houses, designed by architects of different famous Moscow studios.

This is the story: a recreation center was planned in the village, or more precisely, an ornamental pond with small islands and the promenade area around. But in a while, it was decided to allot another three sections on the bank for selling. Not to ruin the expensive image of the central area of the village with unpredictable customer’s ideas how to design their own houses, the sellers commissioned the project of the three houses surrounding the pond to PANAKOM. This ensemble is to become the core of the village, the surrounding of its ‘parade square’, in this case it is water.

All the three pieces of land have complex outlines, very much like a triangle. Two of them are almost symmetrical and are placed close to the water, whereas the third one is comparatively remote. Though it is not placed right in the middle between the others, the authors preferred to play the symmetrical card. Fortunately, it is possible to find the view, where it will be right in the center. Accordingly, the houses on the lakefront line are designed reflection-symmetric and horizontal, stretched along the bank, while the distant house is higher and more accurate, with firm vertical zoning. From the pond, the ensemble reminds of Egyptian motifs - the green tabernacle roofs resemble scarabs that have climbed each on its hillock in order to flank the third house from an observer, standing by the lake, and also the pond from the tenants of the houses. From another perspectives it give the impression that a house is looking over the other’s shoulder in effort to glance at the water. Besides, the top floor is designed as a kind of observation platform with entirely glassed pavilion of winter garden and sun booth.

Working on the lakefront couple (each total floor area is 600 m2), the authors tried not to overcharge the landscape visually. They even persuaded the client to put transparent glass fence. But, at the same time it was important to create the private atmosphere for the future tenants of the houses: to make the figures of people walking in the public area softer, or better unseen from the houses, with that keeping the beautiful views on the water.

The decision was prompted by the building land itself, there were masses of sod remained from the pond. The architects earthed the houses one level down. That is, taking exercises by the pond, the walking can see the two-storey house, which appears to be the three-storey from the opposite side, revealing the additional storey, deepened into the ground. Besides, the volumes of the houses hide their lawns from strangers. The effect is that the houses placed in the center of the main public area of the village, provide their tenants comfort and privacy without building blind three meters high fence. And also let them enjoy the picturesque views as if the pond was their own.

Hard to tell the number of ‘storeys’, partly earthed. It is more appropriate to use the term ‘level’. There are 4 in total, divided with a half-storey drop. On the first level there is a garage, below stairs, on the second there is entrance lobby and bedrooms, on the third there is a kitchen, dining room, living room and veranda. And upper there is the bedroom of the house’s owner and the other veranda. In each house the two upper levels are joined into the independent volume. The decoration will differ in material and color. The external surface of the gable wall-roof is copperbottomed. The huge stone chimneybreast, attached to the external wall, completes the individual interpretation of traditions.

The third house contrasts to the ones described above. It is smaller in area and looks like a white four-storey tower with rounded outline, resembling a slightly flattened cylinder. The shape of the scheme had been suggested by the perfume bottle ‘2’ by Comme des Garcons. It is an interesting item of industry design, created a few years ago. A special campaign was once launched, devoted to it and held in 10 cities of the world. The clearness of shape, accentuated with softness of stucco siding, is made livelier with oriel windows. They are like huge square pipes, directed with it’s glassed eye to the most interesting views. Capturing them, they make perspective pictures. Outside, these window lintels will be fronted with different materials: wood and metal, each will have its texture and color. On the flat roof of the house there will be open-air terrace, which will add the broad panorama to the perfect match of views.

To conclude, the three houses lined up along the public beach, protect their tenants from stranger’s eyes; invest them with variously directed sights of waters and surroundings. But at that they delicately and modestly decorate the front of the village. The houses play for the two audiences: their tenants and neighbors, strolling around. A theatrical game of broken roughness of the symmetrical composition and different textures is dedicated for others. The flanking houses are symmetrical against each other. But if you go along the bank, a motion arises, getting a sudden approval and growth in beat of colorful window lintels of the third house - the center of the composition and ‘hub of the universe’. On the other side, the metal outline of the two horizontal houses neighbors with earthy brickness of the chimneys and the first levels. These compositional and texture correlations, play with levels and directions may turn into remarkable, plastically intensed architectural dominant of the countryside village. 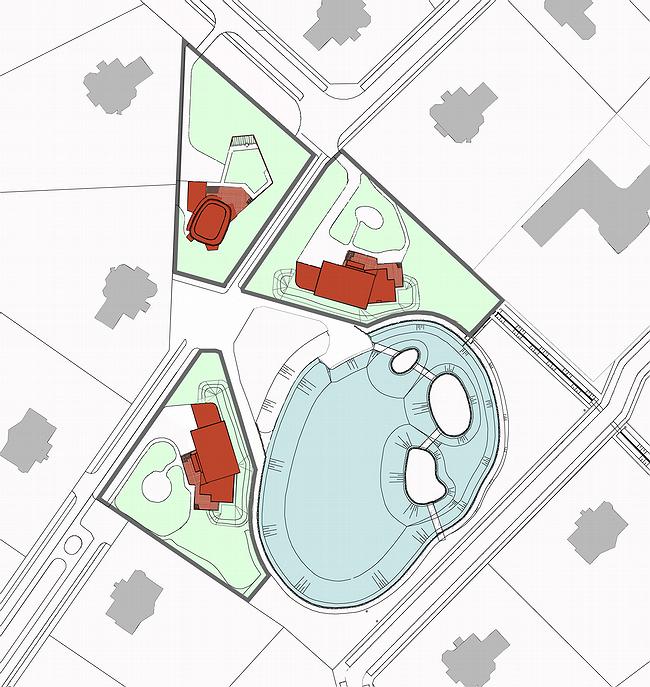 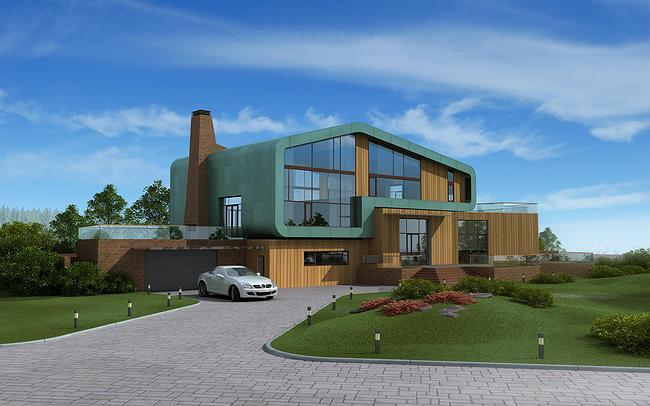 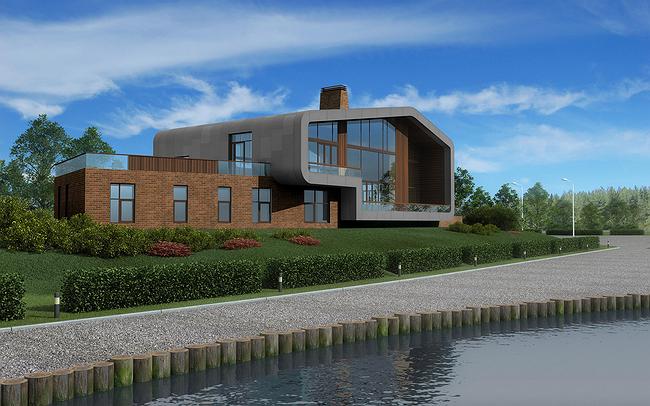 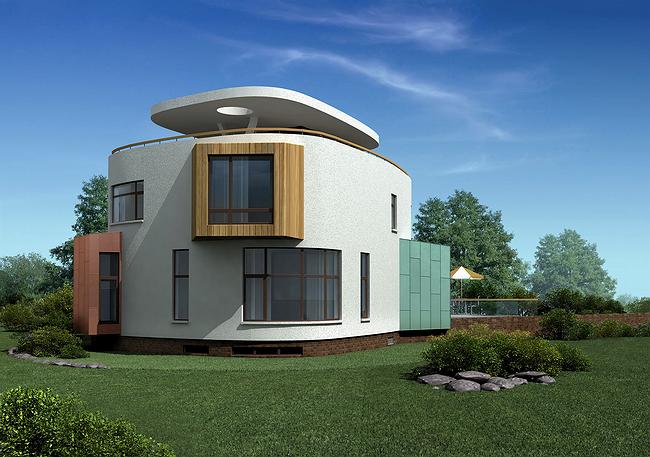 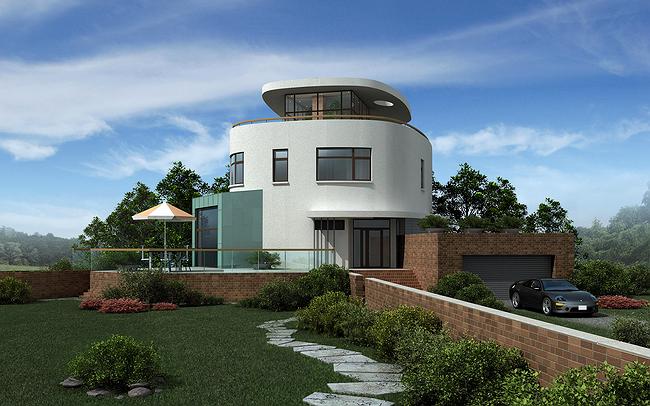 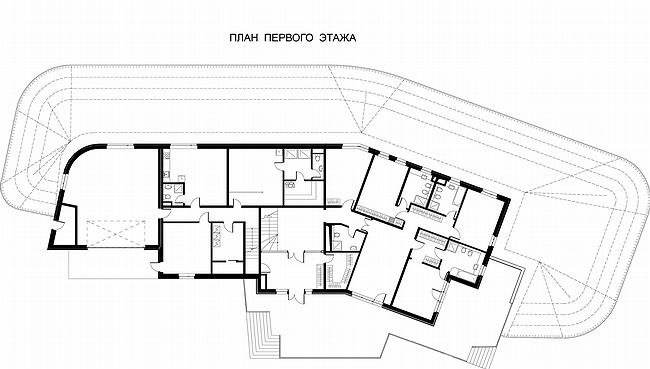 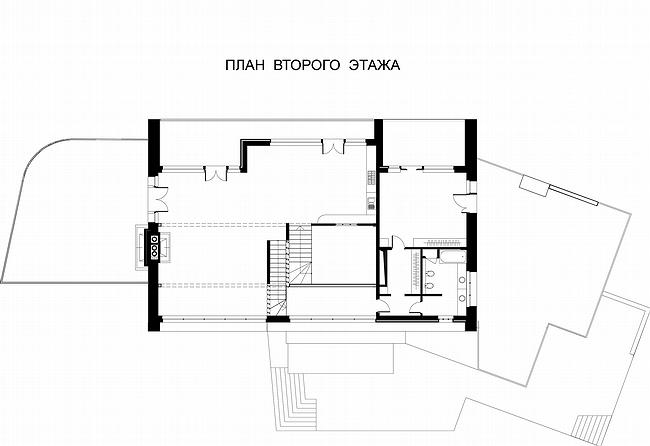 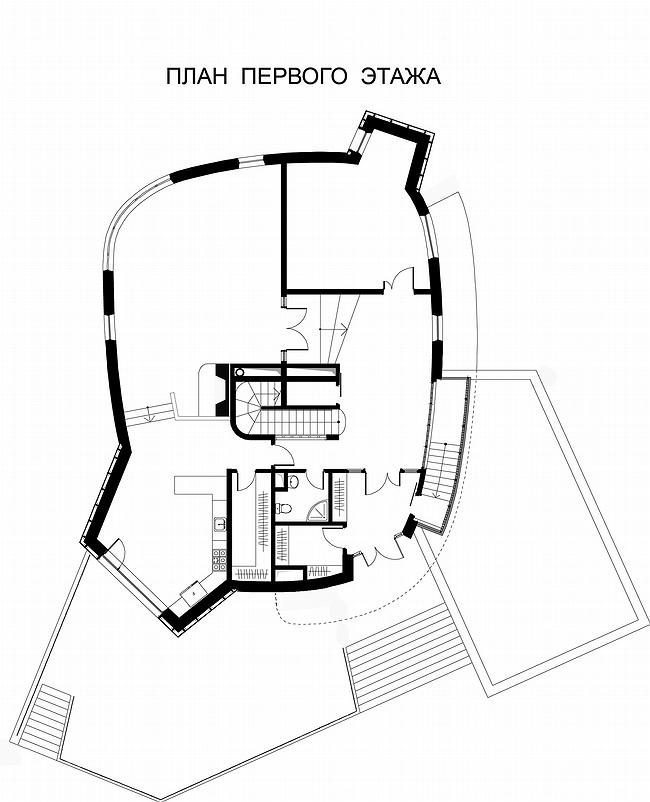 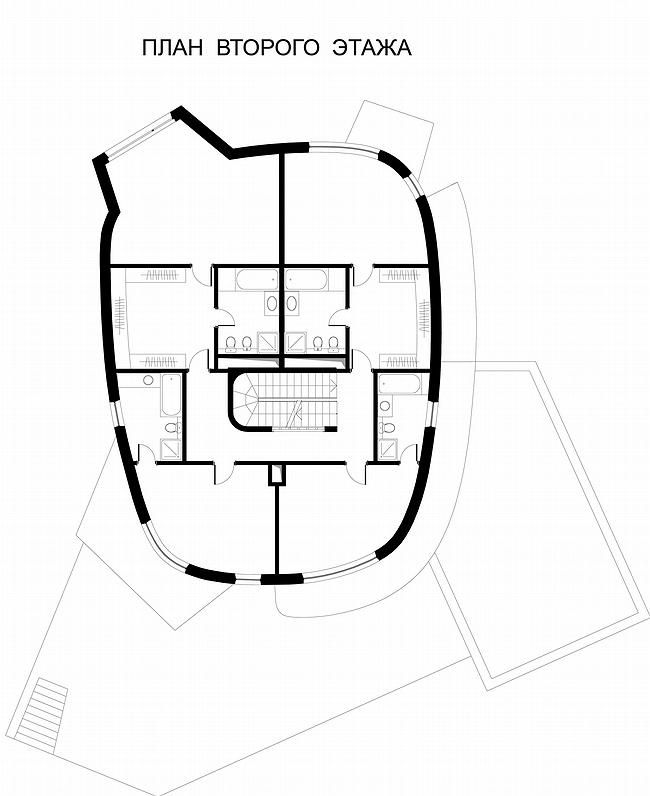