Freestyle is an indoor ski slope, combined with aqua-park, apartments, shops, and so on. It has the shape of a snake and encloses the slope with snow in any season. The peculiarity of the project is that the modern nonlinearity of its plasticity is not an extravagance, but solution to the problem of practical importance.

The indoor ski slope is a fine opportunity for creating a good example of nonlinear architecture. This tendency is also called digital, because various and complicated bends require computer calculation. Or also - biological, because of similarity of architectural volumes to different nature shapes. For the past 5-7 years it has become widespread on the West. The tendency occurs in Russia as well, mostly in slight bends and rounding, and also in intelligently chaotic dance of windows. These techniques are getting countrywide. Most, so to say radically ‘digital’ is the range of some architectures’ projects. Among them is the ABD’s design of retail complex “Evropark”. Boris Levyant, the head of the company, said that was their first experience of work in that fashion.

So, Freestyle appears to be the second one. One of its differential peculiarities is that in this case, the nonlinear shape, with clear bionic resemblance has been inspired with functionality. Intelligently and brightly it develops and crystallizes this idea. Thus, an expensive undertaking for an all-year entertainment becomes a fine basis and impulse for growth of the quite extreme but modern visualization.

The slope, enclosed in an ‘air tunnel’, doubly bends, changes the direction and slope angle, and therefore provides maximum impressions for skiers. The first unique characteristic is that indoor ski slopes, which are only about fifty in the world, rarely have such an elaborate construction. The other is that the 550m slope, covered with artificial snow, will combine the longer ski slope, the snowboard track and the training slope. As a result, Freestyle will be one of the largest indoor slopes, source of impressions and adrenaline.

The effects are achieved with contrasts: after dashing turns of the slope, another on the list is the neighboring of winter landscape inside the ski pipe and ‘tropical’ climate in the aqua-park downstairs. In the end of the ski slope, the skiers will enjoy the view to the aqua-park amusement through the stained-glass window. They may proceed if wish, achieving the dream of most Russians that winter and summer is at one time and place. But, skiing and snowboard together with aqua-park is not all. There will be hotels, apartments, parking area and all kinds of shops and stores – from supermarkets to sport boutiques. Still the main idea and architectural highlight of the project is the ski slope.

From the outside due to dappled cellular ‘skin’ Freestyle looks like an anaconda that has crept over a hill, surveying the surroundings from the 80 meters height. The height difference is notable. On the top point of the ski slope there is the stained-glass window almost of the pipe’s width – a giant snake’s eye. The supporting metal pillar, split into several branches for better reliability, carries the imaginary head of a snake. Inside the pillar there will be an elevator for lifting the skiers to the top of the artificial mountain. The area where the complex will be built is rather plain. For the lack of hills or mountains the ‘anaconda’ will be resting on the artificial one – the building with the rounded outline, with a range of ellipse and round ship-windows. There will be mentioned above apartments and shops. The complex is situated one and a half kilometers from the Moscow Ring Road, 3 kilometers from railway-station and is close to the Kievskoe highway. So, it will be provided with everything that is necessary for comfortable life.

Well, it is obvious that Freestyle is a spectacular and striking at the first sight construction that with its nonlinear shape answers the extreme sports and entertainment purpose. Such a union of the complementary things, like architecture and functionality, is remarkable. Firstly, because it realizes the quite forgotten dream of ‘classical’ avant-garde, fusing it with modern plasticity. Secondly, it is notable, that the nonlinearity of most modern foreign constructions does not reveal a building’s purpose, but is designed to impress. Well, they do provide comfort and best of the modern life, but it is a fact that the most branded of them get profit from the extravagant and provoking design, and rarely from it’s usefulness.

She ABD’s ski slope successfully avoids the contradiction. Its design is advanced and practical at a time. It has been inspired with functionary first, and at this point it answers the requires of modernism and neo-modernism. Seemingly, the result is – squared modernism. 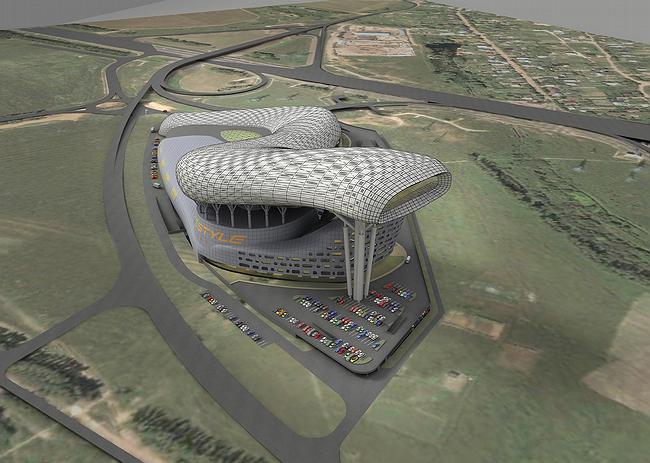 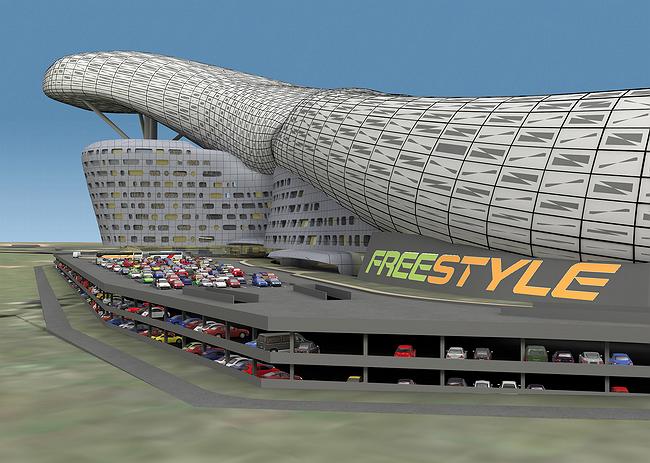 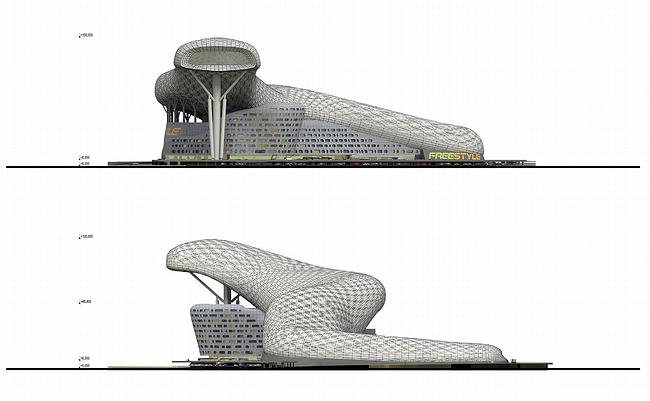 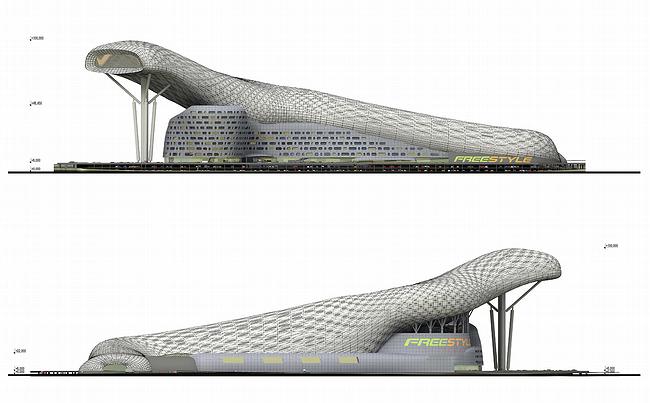 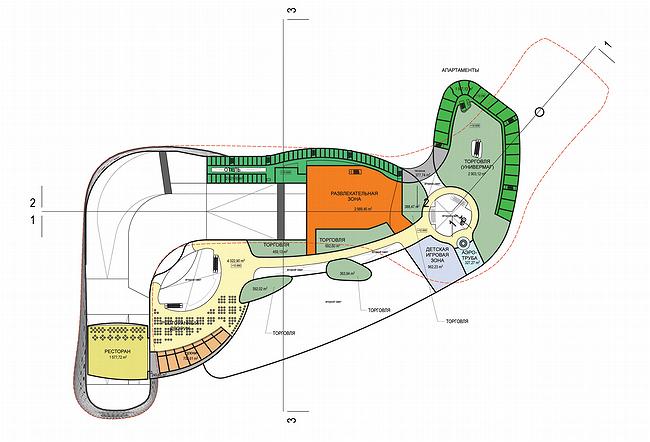 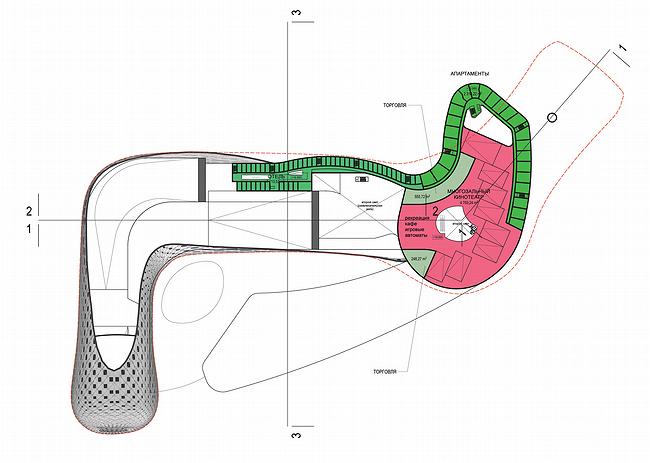 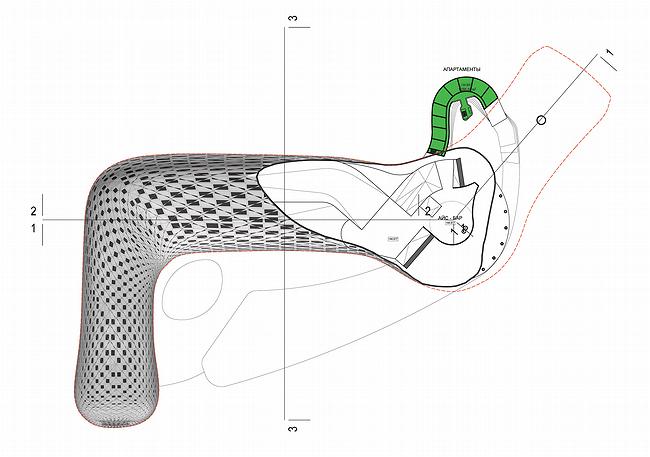