“Villa Calypso” made by Ilya Utkin for ‘Pirogovo collection” is a rare contemporary architectural project with literary connotations. It could be understood as quintessence of the authros’ attepts at creating his own architectural language suitable for large villas-palaces.

Nymph Calypso was one of the most enjoyable adventures of Odysseus. Cunning Greek lived with her for 7 years, and she bore him seven sons including – as some versions of the myth say, - Romus, Latinus and Ausones, first kings of Italy. Thus Romans descended from Odysseus. These days Calypso is mostly known as a ‘patron’ of tourism and long voyages – since Jacques Cousteau named his ship after her
Architect Ilya Utkin called his project of the country house ‘villa Calypso’ referring mostly to Cousteau. ‘Mythological’ name is atypical for contemporary architecture. These days authors think of function and ergonomics, of pure form and plasticity, of social responsibility, history and politics, or about architectural styles. Few architects would refer to literature, allegories, or myths. Moreover, architects rarely give names to the houses. If a building has name it is usually given by realtors, therefore it has nothing to do with architectural image.
The case of Utkin’s villa as atypical: its’ literary’ name has been chosen by the author. One gets a feeling that the name reflects architectural language developed by the author in his projects of country houses of the last decade.
The name of Greek nymph hints at the architects’ desire to fill the house with mythical persons or spirits. Interpreting a building through sculpture is typical for all historical architecture although in the 20th c. ‘stone population’ disappeared having been replaced by ‘propaganda’ – i.e., by women with an oar, or athletes.
Utkin however often uses figures on porticos and designs nymptheos – fountains decorated with relief; the name itself shows that it is not just about water, rather, the spirit of a spring lives there. It seems that Ilya Utkin is the only architect to use façade and park sculpture constantly, and to treat it as a necessary part of architectural design.
‘Villa Calypso’ has a ‘soul’ – as ancient Greeks would understand it. The villa likes water thus one third of the building that is dug in into soil is turned into a swimming pool covered by large cylindrical vault; the latter reminds of Ancient thermae. Thus the swimming pool looks ‘Roman’; it constitutes the core of the house which is built on top of it.
The swimming pool could be taken as a symbolic connection with a mythical cave where the nymph had lived on the Ocean beach. It also reminds of a spring that is dedicated to an ancient deity. Villa ‘Calypso’ does not copy anything and does not construe the logic of ancient myth directly. Rather, it hints to hidden meanings that could be reflected upon. The hint is visualized by sculptures of Poseidon with a trident on north-western loggia..
The top part of the house consists of two floors and a large attic with two classical-shape frontons filled with geometrical ornaments made of wooden beams. Under frontons there are Corinth porticos; two columns unite two floors. Similar columns ‘held’ the central part of the long southern wall. Here the space between the columns is filled with glass so that columns ‘work’ both outside and inside the house where they turn into an important part of the main hall inner space.
Villa has a simple symmetrical plan: the central core has two adjacent parts of identical shapes. It is a classical plan of a house- parallelepiped divided into three parts set in hierarchy. This plan could be traced back to the palaces of Italian Renaissance and Palladian villas. It is the main detail that tells us: here is a palace, although its function is to be a country house. Thus the closest analogy would be a Roman suburban villa.
The villa lets nature get inside – as far as it is possible within the framework of classicist paradigm. First, the villa’s outer contour has numerous balconies and loggias. Some of them are formed by porticos, others are placed between risalits: at the lower part walls are replaced by windows in order to get day light for the subterranean space of the swimming pool. At the top floors walls give way to balconies. Thus a beautiful landscape is let into the house. Он впускает Secondly, the theme of nature is emphasized by the use of rust surfaces that cover the lower floor walls.
The house should not be viewed as a reconstruction of a Roman villa, or as a paraphrase of Russian or English Palladianism though one could find traces of those stiles here. One could also find features of the early 20th-century neoclassical architecture. However the main characteristic of the house could be said as a natural combination of all those elements that together create an individual architectural language of the author. Ilya Utkin has been creating this language during last five or six years. The meaning of its style is in search for the architectural imagery of a Roman suburban villa.
Here the eternal search for golden age takes the following path – the architect finds gets details from all renaissances and classicisms and rearrange them into a unique and very personal stile. In case of ‘Calypso’ the search went further than the most archaic prototype reaching Roman’s mythological ancestors.
Text by: Ilya Utkin, Julia Tarabarina 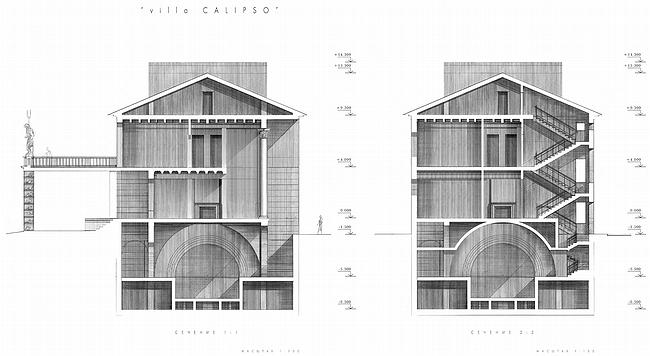 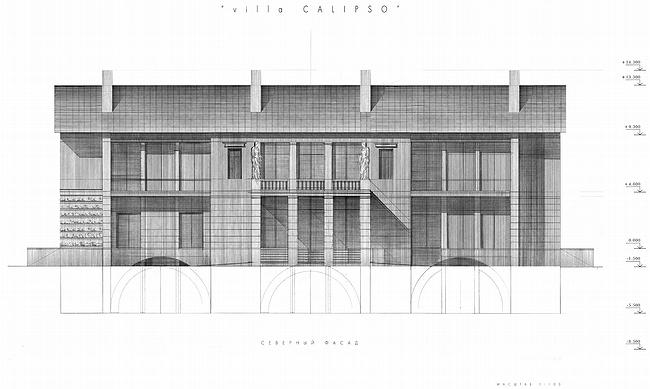 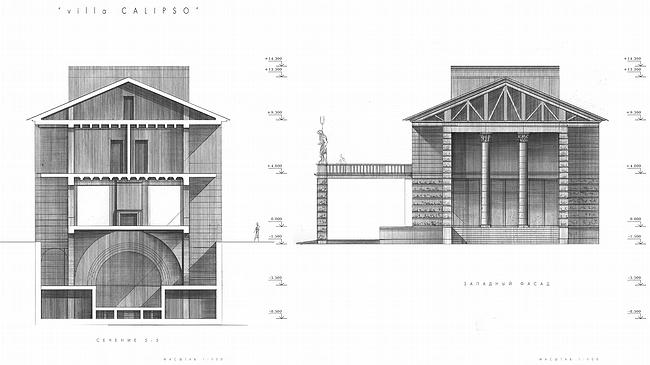 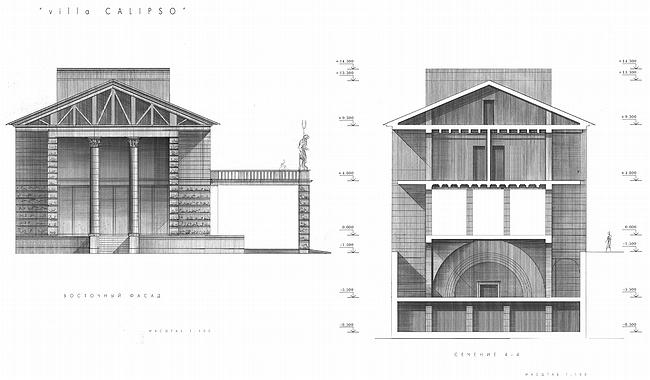 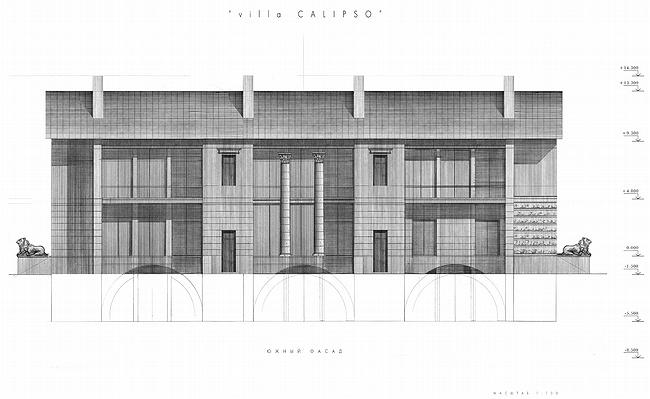 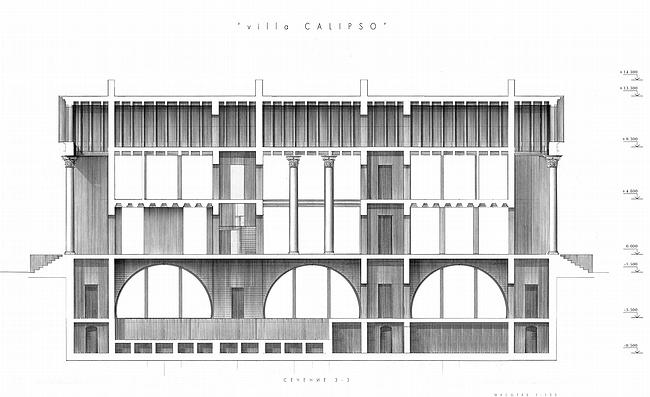 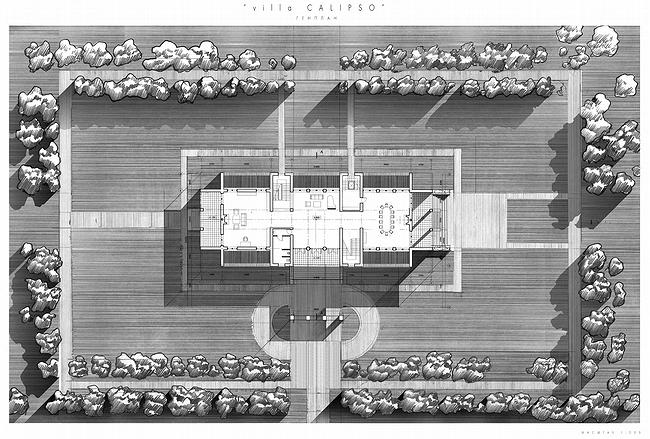