This is the project of the village that consists of the four private houses, 2000 m2 each. The extent of such a house is comparable to a manor house of the period between the ‘liberties of the gentry’ and the beginning of Russian capitalism, that destroyed that way of life. However, a manor house of classicism was an absolute center of ensemble, in other words, it was the only one. In modern practice it is required houses to be a few, even large ones – they have common fence, security, services and the construction are paid back. At that, there emerges a specific architectural task to unite the four buildings, each with nature right to be the absolute leader of the ensemble. It is like in the well-known joke where some one asks the artists: «under the order count yourself » and hears in answer: « the first, the first, the first … »

Ilya Utkin aims to reconcile the four «proud egoists», and even calls the village main street «avenue of the Harmony», emphasizing that first of all it concerns to the architecture built not on contrast, but on the harmony of forms. The houses are like brothers, quite alike, but yet individual.

Genetic similarity is achieved by the same composite scheme: so to say, each brother has «the two arms, the two legs». As the common ancestor is recognized the «Palladian» symmetric rectangular volume with a projection of the central portico like of a Russian (or English) manor. The sign of youth is the long covered swimming pool, nowadays, an essential part of comfort, asymmetrically linked from the opposite side. The «Brothers» are turned on their areas at different straight angles, and this gives a hint at the different psycho types: the two conservatives front the main avenue with the aligned palace facades and with gables, the other two are more eccentric, they front with end faces, having turned their serious faces towards the fence, where they will be seen only by the family members.There are porticoes at end faces as well, but the gable is replaced by slope roof, as though it has leaned backward, and columns support only the lower eaves. The houses alternate in chessboard order so, that all over again at the left we see the conservative, on the right the eccentric one, and then on the contrary.

All porticoes are different - a big bunch of variations, there are Palladian ones, ‘in the fashion of Quarenghi’, near there are a few balconies on rusticated supports with flowerpots, which can hardly be in a private residence of eclecticism; even the columns, built into the stained-glass of window, is a technique of neoclassic of the beginning of 20th century. Citations, however, are not literal, but more of typological kind. They are joined by general proportions, sizes, module and the author's style. Its most noticeable features here are – great extent of columns and supports, leaving spacious terraces; extraordinary in our times care for sculpture, and the emphasized laconism of smooth walls in the places where there are no porticoes.

Another architectural feature is the very classical attention to the nature, which here is the only environment and context. The main avenue comes from the East, where the entrance is; almost straight to the West - on an eminence there will be a nice round arbor to admire sunsets. Accordingly, promenade will have sunny southern side, and the shadowed northern. This influenced the front facades, designed by contraries: old quadras of "natural" rustication will be lightened with sunlight, and the round order, more magnificent and accurate – on the northern porticoes, as if compensating the shadowy position by its Corinthian bloom - or with a view to delicate image, less strong difference of light and shade effects.

The village will be located in the bend of a small river on the hill, supported by a basic wall covered by plants. The architect gave it the name "Acropolis", probably, it suggested by the combination of this wall, that is like a reduced many times wall of a Greek temple mountain, and resemblance to asymmetric houses of volume composition of the well-known Erechtheion. Or, as the architect adds, from the associations with the Greek polis where, behind the large wall, having isolated from the world, ‘all are equal’, internal harmony and brotherhood arise. On the other hand, it is well known, that Palladian, having given the human palaces the porticoes adopted from Deities, have turned them from a palace almost into a temple. The ensemble of a several temples is an Acropolis - so the name is just right. Anyway, it is true that among the modern palace settlements this is a rare ‘pondering’ one of its historical roots, plastic prototypes and about the internal relations among the houses. 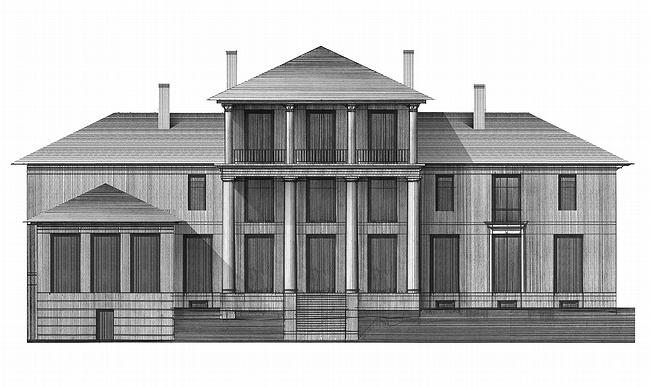 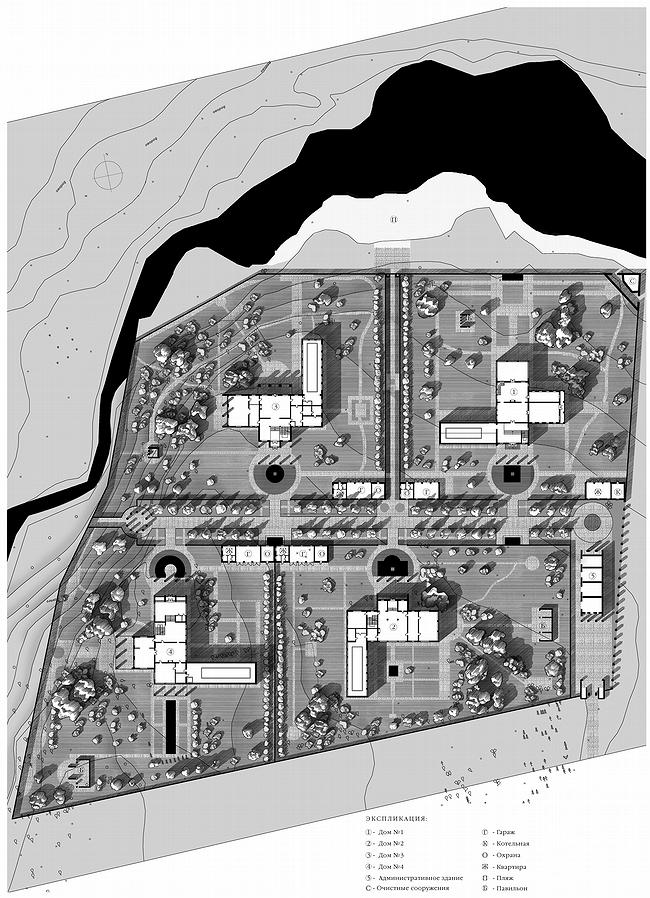 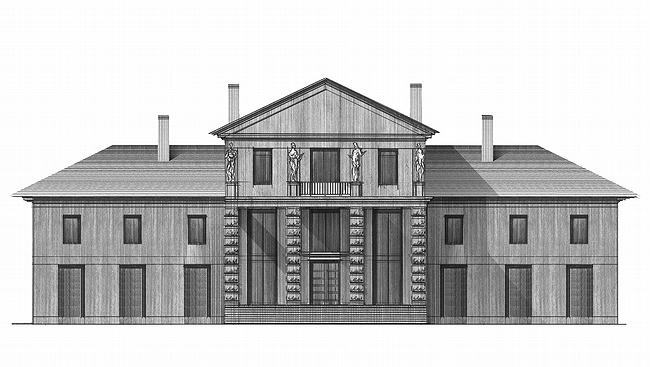