Alexey Bavykin has designed a building that continues and takes to a new level the sculptural themes of the house in Brusov side-street. The main sculptural theme here is the one that has been around for centuries: vertical versus horizontal. The latter cuts off, the former crops up…

The Elektrichesky (yes, “Electrical” – translator’s note) branches off from Gruzinsky Val Street in the direction of Tishinka Street some 15 minutes’ walk away from the Byelorussky Railway Station. This side-street has kept its building front of XIX century tenement buildings almost intact – only on its left side there is a small gap with a single-storey house inside of it. And it is this spot on which Alexey Bavykin “commercial apartment building” is going to be built. The site is a tiny one, and the house occupies the whole of it with its façade bordering exactly on the red line of the street. The house is going to be a little bit taller than its neighbors (seven floors versus three on the right and four on the left) but the architect uses the classic Moscow solution – he pushes the upper penthouse floors away from the red line of the street which makes them virtually invisible to the street observer. The five lower floors are lined up along the building front; on top of them, a forest of verticals springs up. These verticals that puncture the openwork marquee are decorated with various sculptural elements executed in the vein of the famous Bavykin dog that has been the main part of his corporate logo for quite a while now. This asymmetric and irregular “crown” that hides the jagged zigzag of the penthouses is the most noticeable part of the façade: it looks like a fully-fledged sculpture exhibition, so rare in Moscow, especially nowadays, and especially on the facades of the houses. The sources and the origins of the image of this house are quite easy to trace. What we have here is the “younger brother” of the already-famous house in Brusov side-street with a façade of tree trunks clad in the stone coat. What is so recognizable?First of all, it is the tree trunks. There is no stone here, everything will be brick-faced, and there are no branching trunks either. However, the “sprouts” of different heights in the upper part definitely serve as their circumlocution – but circumlocution that’s been geometrized and is now an integral part of the façade, not some kind of a decorative wall. Yet another noticeable quotation from Brusov is the wrought-iron sprigs. Back on the “old house”, the wrought-iron springs were on the fences inside the atrium where they served as the miniature versions of the trees of the façade. Here, this theme got a life of its own, characteristic of openwork ornamental fabric. It was used to make the marquee that casts its openwork shadow; bands of this fabric are also used in the stanzas and the five small “lonely smoker’s balconies”. The house in Brusov side-street is the closest yet not the only relation of our hero from the Elektrichesky side-street. In the recent years, Bavykin has been exploring his idea of “crown-above-the-building”: the vertical forests turn the end of any volume from a definite and defined horizontal into an indefinite and boundless multitude of crops. In the case of Gdańsk War Museum, it is a true gothic crown with crosses; in the case of office high-rise on Avtozavodskaya metro station in Moscow, the verticals in the upper part look a lot like the strips of bark. This solution is ultimately the antithesis of the cornice. The cornice rounds up the facade and is accordingly called “crowning”. The sticking branches, tree-trunks, or even naked pillars are something that’s indefinite, open-ended and fraught with continuation. In this case, however, the two opposites met:the pillars crop though the ethereal cornice, and it goes out of shaped, outraged. Making the opposites clash, incidentally, is one of Bavykin’s favorite stylistic devices. Anyway, this architect does have a genius forturning any paradigmatic problem, a “commercial residential building” into a “Picture at an Exhibition”.
Text by: Alexey Bavykin, Julia Tarabarina
Translated by Anton Mizonov 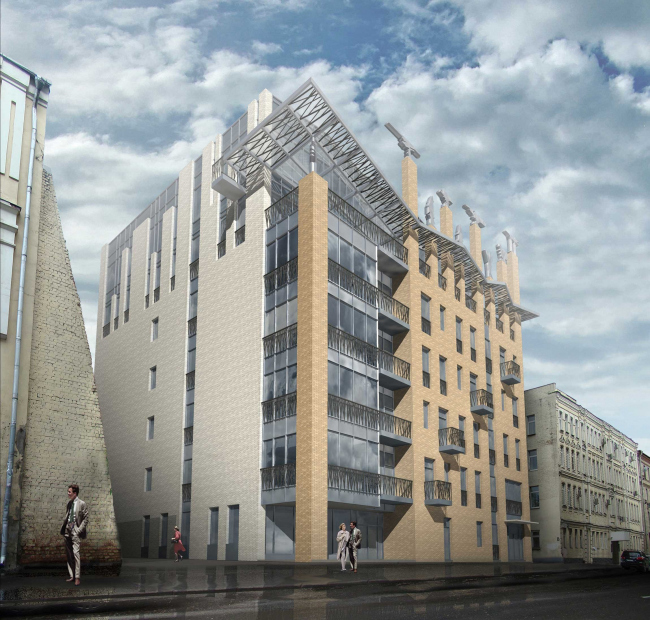 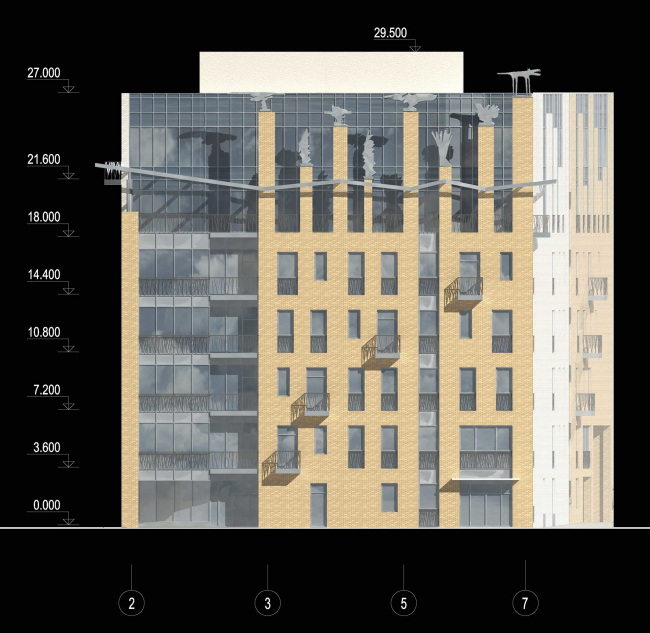 The house in the Elektrichesky Lane, 2010. West facade (the main one) 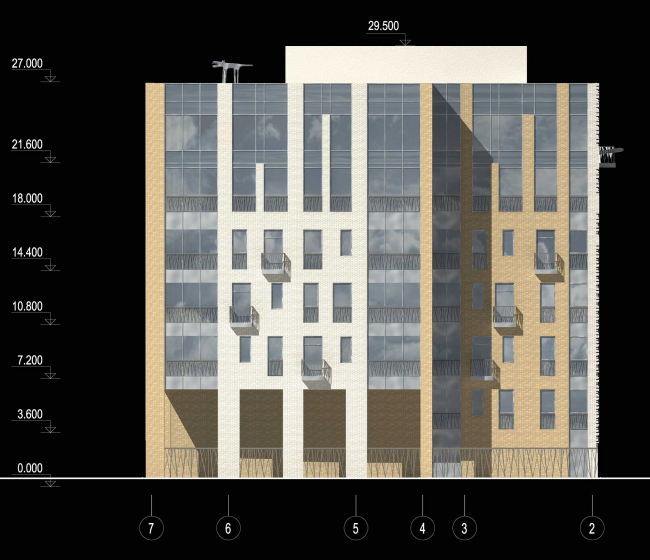 The house in the Elektrichesky Lane, 2010. The east facade 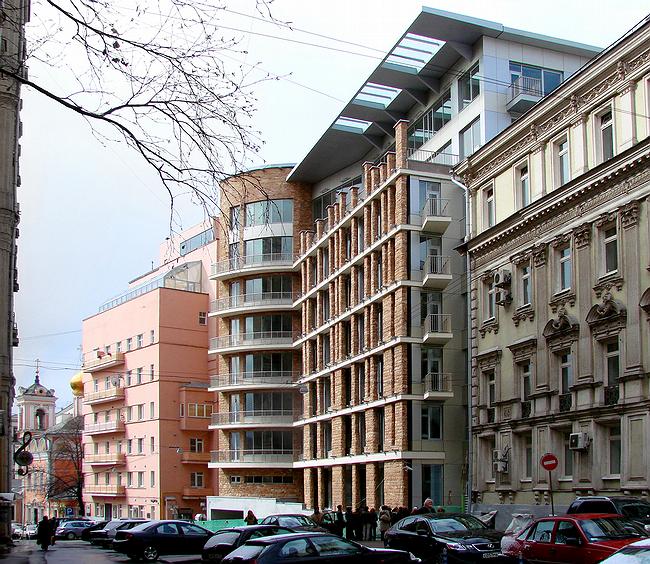 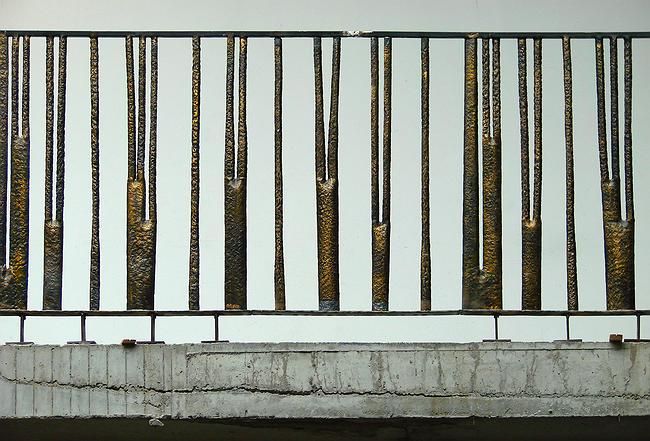 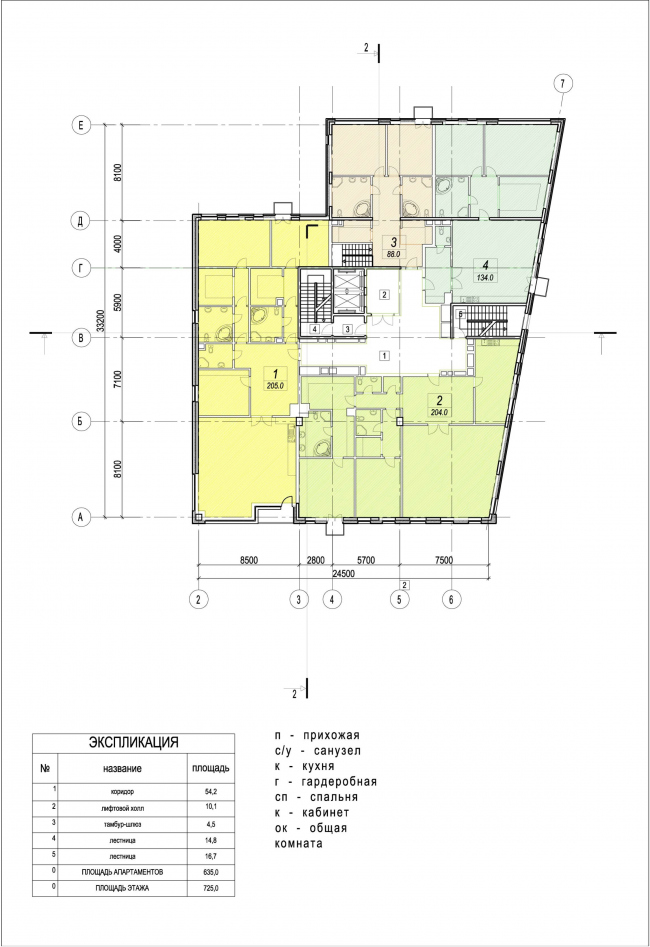