Not worse than Pritzker

Today in stylish and cozy hall of national centre for contemporary arts the exhibition of nominees and winners of Jacob Chernihov’s premium has opened. At press conference before the opening of the exhibition the chairman of the international jury, Elia Zengelis has told, that he considers the premium founded by fund of Chernihov even more important than Pritzker.

The exhibition pursues the same purpose, as the premium: to connect searches of avant guarde with the work of modern and young architects (under 44 years old) and to direct them to the future after futuristic dreams of the avant guarde so - to revive spirit of 20th years of the XX century in works of architectural youth. Attempt to connect together memory of architectural avant guarde and the present was very evidently embodied in the exposition. Tablets of winners hang in the middle,- Pierre Antonio Aureli and Martino Tattara and around them the original Jacob Chernihova's schedule, architectural imaginations are exposed, and more around on walls the presentations of ten best of 55 nominees are projected. It has turned out some kind of spatial roll, allowing to estimate similarity and differences of a modern modernism and its sources. The curator of the competition became Zaha Halid - she has selected experts, among which Tom Main, Eric Egeraat, Peter Cook, and they have selected nominees for participation in the competition. The chairman of jury became British architect Elia Zengelis. He has expressed at press conference in the sense that considers the premium of Fund Chernihov even more important, than Pritzker because it is awarded to the mature architects, and here - the premium headed to the future and aspiring this future to generate. The chapter of jury has told about works of nominees so: there were many very talented participants, but many are keen by modern computer technologies, and experts searched for the bright manifest, the break adequate to military ethymology of a word "avant guarde" - an advance party forming the future. On a background of domination of formal searches that have appeared the Italians working in the Netherlands, Pierre Antonio Aureli and Martino Tattara, the group DOGMA. Young Italian-Dutchs think of themselves as Europeans in a broad sense, they are keen by ecology and social problems, are interested « in more cities, than buildings ». Their works are basically town-planning concepts of a different degree of utopianism. On the premium the project of a cemetery of the ideal city of Vema exposed on Biennial, «the city of the new Jacobins » has been presented, and which, being placed on a cemetery will be in opposition to « hegemony of a creative class » and to preach the new « way of life based on solidarity, a solitude and readiness to share vital space». It is simple to notice, that words are more than forms, though than words are all very correct. Forms - very simple, architects as they said intentionally do not trace a building, their presentations and tablets are more similar to schemes even then when represent concrete things. It would be complex to detachment and to wish from plastic searches, a greater dissimilarity with modern venerable "stars", therefore it is necessary to recognize a choice of experts corresponding the vanguard concept of the premium, it some kind of overcoming of a vanguard heritage by its means - as the manifest, the theory, denying of the become obsolete form. This architecture up to such degree shipped in the theory of innovations, that would be desirable to name it consisting of words - manifests, concepts, theories, so it becomes weightless, partly imperceptible, and to these attractive. Such verbal architecture is in a counterbalance to our paper. Architects have told, that it is more important for them to receive the Russian premium than international, very important that the ceremony took place in Moscow, because Moscow is one of the most interesting capitals of the XX century. Implied sense here should be that Moscow is one of the capitals of Russian avant guarde though if to try to measure Moscow by measures of the urbanism preached by winners it is possible to understand their pleasure as pleasure of the doctor at a view of the interesting patient - but it already remains behind the frameworks of discussion. On November, 13th in the evening the open lecture of the winners took place on which Aureli and Tattara have shown three conceptual town-planning projects, for Athenes, for scientific small town in South Korea and for the capital of Albania Tirana. At the lecture the architects have once again emphasized their great interest to the public spaces, original ideas and some coldness concerning forms of concrete buildings. The South-Korean project, for example, assumes a combination of cross houses, spaces between which should be filled with a public life. It reminds a little the uniform cells of a cemetery of the new Jacobins which project was put forward for the premium and it was simultaneously exposed on the Venetian Biennial. On November, 14th the presentation of the premium takes place - winners will receive 50 thousand Euro and a number copy of work of Jacob Chernihov. Besides the main competition a part of the premium became some additional programs - student's and children's competitions where monetary prizes were awarded (each of additional nominations - on 10 thousand). Student's competition is a visualization of architectural imaginations of Jacob Chernihov, in the sum they are called to show these works of Russian classic avant guarde as not simply graphic suites, and three-dimensional spaces. These are beautiful, professional and very modern compositions, comparable to those shown on the projection of nominees; still it is possible to argue, where it is better. Among the children's stands a pair dummy in a suit in spirit of Chernihov’s of architectural imaginations from studio " Start " certainly attract attention - some kind of « the Worker and the Farmer», but not such cheerful. From the three first premiums of children's competition one was awarded to the Italian children, and the difference is very well appreciable: while our children diligently draw abstract compositions in a greater or smaller measure, sometimes quite professional on workmanship - foreign children have a good time, connect cocoons from cords, make ships from cardboard tubes and small houses from polyethylene bags.
Text by: Irina Filchenkova 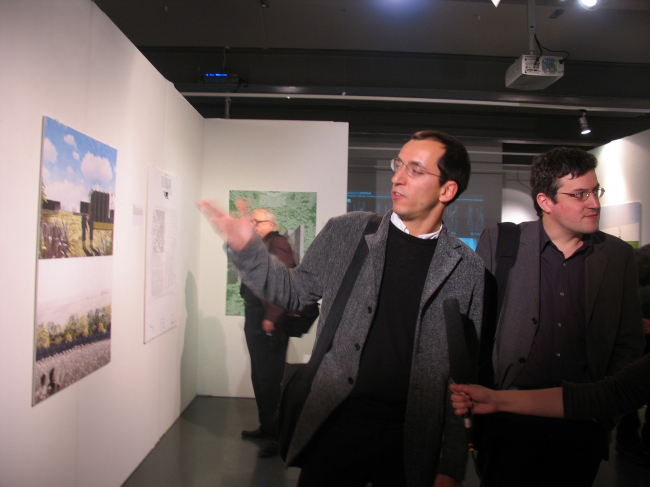 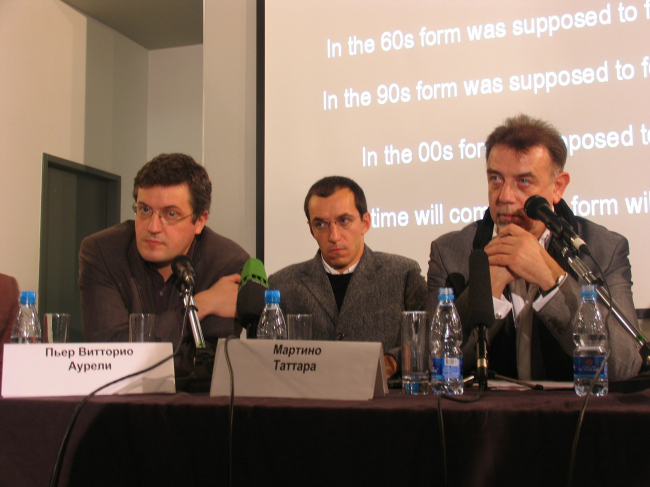 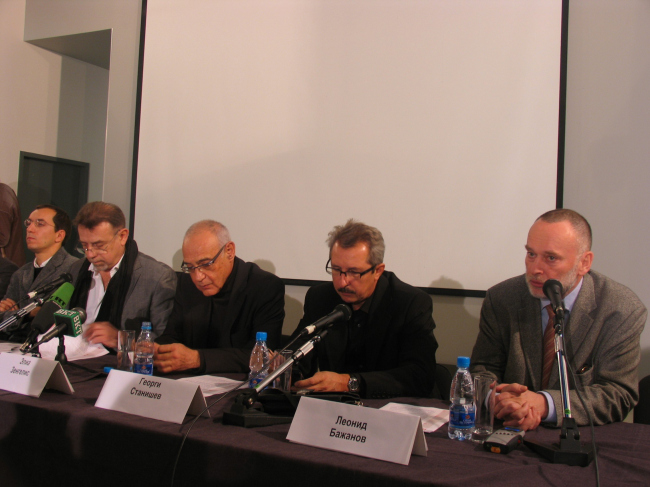