In upper reaches of the Yauza, in street Krasnobogatyrskoj, construction of a new inhabited complex under Nikolay Lyzlov's project begins. The original name - « Krasnobogatyrskie elephants », approaches unusual architecture of a complex.

In Moscow it is accepted to name inhabited complexes sickly-sweet-romantic: something sunny and sky-blue at once to inspire the buyer, that it gets an apartment not on the Moscow suburb, but at least in Sochi. And suddenly - elephants. It is in general romantic - elephants are not found here. Whether it is pink elephants from a nursery song, whether from a known joke, namely a monument to the elephant on its historical native land … In any case a course not usual, and houses are not absolutely usual too.

The modern habitation aspires to grow upwards as a comic rocket on a launching pad, a fine example – just constructed towers situated  close to the "elephants". Lyzlov’s houses on the contrary, do attempt to dissolved in a landscape and in rather poor surrounding building, echoing a slope Yauza coast. The houses could be of still smaller height but to keep space for park on the coast Yauza, « the area of building kept up and houses became greater » - the architect complains.

All the around try to enclose their elite houses by the more powerfully fences, but Lyzlov, on the contrary, put between cases the new street to open for the neighboring inhabitants pass to the river and park, and also to involve them to shops and cafe which will settle down in the bottom circles of the houses. But it does not prevent to create more closed quiet court yard  in the corners between the cases.

At last, now it is fashionable to connect windows, in memory of constructivism in horizontal tapes, and Lyzlov deliberately extends them upwards, emphasizing the vertical cells similar to same «tape windows», only turned on 90 degrees. Crosspieces between windows will be paint in red and black color, in chessboard order, that in a combination to light "frameworks" will give the mosaic set from apart merging in a required pink tonality of the "elephant skin".

The investor has offered to name houses elephants according to whim, in modern design zoo comparisons are actual. Really, all have got used to combinations of type « a predatory jeep », recovering representations of the owner about a favourite thing. The house is something big and kind, elephants just approach. As in a structure they are valid somehow similar to elephants - at each big case very high travel separating the most part of the house - an imagined body of the elephant from thin "trunk" is conceived. The extended form and an arrangement of the travels, according to Nikolay Lyzlov, have arisen from observance of insolation norms - here it is impossible to place apartments, they will be badly shined. However a necessary hint this, quite practical, form has provided, and houses became "elephants". Lyzlov’s co-author  Vitaly Stadnikov even has drawn a picture: one elephant, is less growth, with a mark of height of 67 meters is the girl, the second, grown up to 83 meters - the boy.

The elephant – is an inexhaustible theme, but one more comparison is curious. Everyone who played chess, know, that there is such figure – the rook, the same is the officer, the same is the elephant which represent in the form of a serf tower more often. And so, if to imagine that all our new elite habitation is some kind of root for navigation in the light future it is quite explainable, that usually it is build in the form of a tower, and here Nikolay Lyzlov has offered more original variant - actually the elephant.

The arrival of elephants means transformation of old industrial zone in a beautiful and manned place. Lyzlov’s house is under construction just on a place of the tannery which for a very long time polluted upper reaches of the Yauza. Water in the river becomes pure, the coast will be cultivated, and here the quay is not present. There one of beams of Sokolniki park leads to the other bank of Yauza , having passed a little further it is possible to get in «Losinku». The elephants turn out to be directly a symbol of new harmless area. 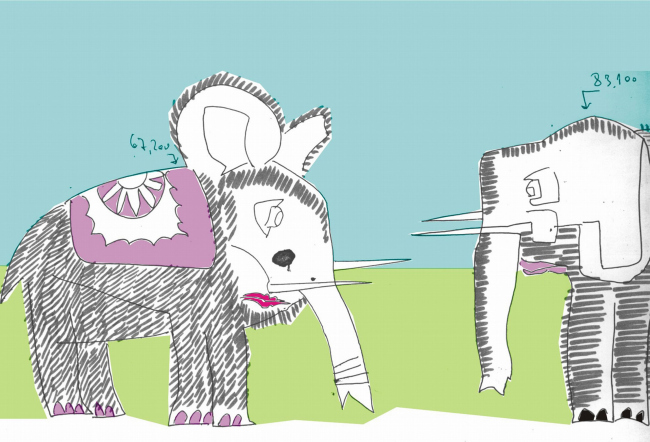