The country house designed by Nikolay Lyzlov in the co-authorship with Olga Kaverina and Maria Kaplenkova - is a rare case for Lyzlov’s workshop. Under the statement of the architect it is traditional, however is very light and opened to the surrounding beauty.

The house reminds the huge butterfly who has split the wings on the edge of a wood, in meditations - whether to depart now, or still to get warm on the sun. The effect of movement of developing wings is created by the lines of a roof which flat slopes cut each other as the fingers linked in "lock" - the line gone downwards, proceeds upwards and on the contrary. From it figure of a roof, called up by wooden houses of Russian north according to Nikolay Lyzlova,  loses some sleepiness inherent in prototypes, turning off to dynamics - on the one hand a roof, as well as it should be, looks double slope, with the other - its edges rise, as corners of lips, representing a smile.

Generally, tells Nikolay Lyzlov, designing of a cottage for a workshop more likely exception, than a rule. The project has arisen because the customer and the architect are connected by a long friendship and the general understanding of a problem, in other words, the customer is not those to demand to itself « the lock of the cannibal … not the cannibal ».

The settlement chosen for the construction, has appeared to be very successful. This is a beautiful place, where « … it is possible to look in all the sides and not to see anything awful … to see only the sky, a wood and a green grass ». The wood around - is similar to park, half of the trees are fur-tree, the other half are strait pines. Even the ground here has appeared almost ideal, consisting of one sand. Organizers not only have chosen a good place, but also have offered the thought over lay-out of the settlement similar to small city, condensed in the center and dissolved in a wood on edges. And conditions are stipulated so that to buy the big site and to resell it, having cut on slices is not favorably, the ground on the big site costs more expensive - that excludes possible gamble and guarantees safety of the conceived device.

The site for Lyzlov’s project is from greater ones, on two third it leaves in a wood. The house - low, split by the ground, is put by a corner, echoing crossing of streets. One wing is economic, which architects for fun name « a coach-hause ». One of its walls leaves on a line of the street, taking up a role of a fencing. The basic, inhabited part of the house recedes a little from the road, before it the impressive "smart" court yard is formed. On the other side of the house as it used to be in manors - the private court yard hidden from eyes smoothly passing in a wood. From this part there are more windows, the house in general is opened aside woods - a glass wall of the pool and a "French" window from a floor up to a ceiling of a of living rooms: each premises have a window in a wood.

On Nikolay Lyzlov's belief, the house has turned out to be very traditional. The basic part of rooms are built in a suite, and the lay-out reminds the manor plan by the "rest", that is letter П, truncated on one economic wing. Really, even for « a small house in village » conservatism is more likely advantage; here the typology developed by centuries and to add something absolutely radical, not having done much harm the inhabitant,  is difficultly.

However here we collide with tradition in a very light, air, transparent embodiment - if it is possible so to be expressed, tradition LIGHT. Unlike classical "palaces", this house freely «spreads» on the ground, it is opened to surrounding space, moreover supplied by slopes-wings, here now will sit, have a rest, and will fly up. 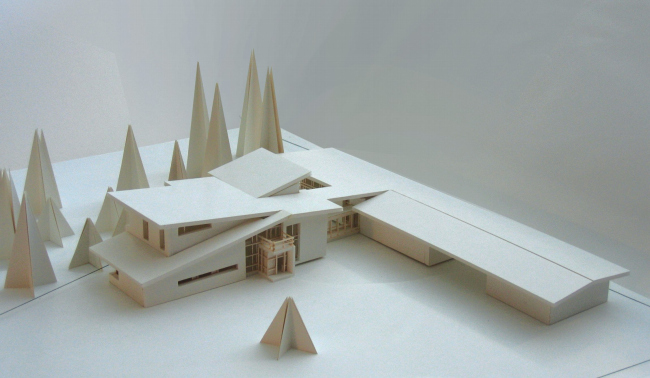 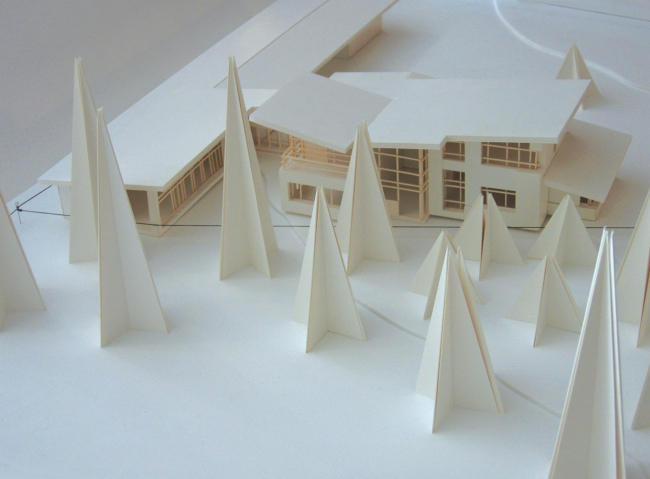