Club on 300 person. An exhibition catalogue

The presentation of an exhibition catalogue of conceptual projects « Club on 300 person. The second attempt » has taken place on October, 26th in a museum of architecture on Vozdvizhenka .

The exhibition has been organized by magazine « The Project Russia », the oldest and, probably, most known of the post Soviet professional editions about modern architecture and it was dated for ten years' anniversary of the edition. Works from an exhibition have been taken in a collection of a museum of architecture, continuing the tradition begun by a series of exhibitions « The Project, the Structure № » when the exposed construction was sent on storage, filling up a museum by modern things.

The anniversary of the magazine and exhibition were in autumn last year, in October 2005, and now, in a year, the catalogue, beautiful, with greater pictures, a non-standard square format and as always in stylish «project tipe» design is published.

On presentation the idea was announced to note decade of work « The Project Russia » an exhibition reflecting mood of "paper" competitions, architects have offered. The list of the workshops which have supported a plan, is enough big - in the catalogue are sixteen workshops, a degree of their communication with «paper architecture » of the eightieth - different, therefore it is impossible to tell, that here, «former paper-makers » were united to revive movement or is simple to recollect it. Participants are united with other general feature - « … architects, 10-15 years back risked to leave ships of Mosprojects and sort of it architectural monsters to begin the business », we read in the introduction to the catalogue, “and taken not separately - but together with all wished to participate young employees of the studios”.

120 works from which it has turned out nice, curious for looking through the catalogue, beautiful and very nostalgic, directly impregnated by fantastic sensation of " the second attempt » - we recollected conceptual competitions, we recollect a youth of present masters, we recollect study in Moscow Architectural Institute. This feeling is caught very thin, looking in the catalogue, it is easy to like it and plunge into a sincere atmosphere of thinking - whether the second attempt possible what is it in general, what it gives to those its making?

The second attempt is, actually, a basis and a plot of the project. Students of Architectural institute on the third year receive the task (the first independent) - to design a club on 300 person. This problem is familiar on student's times, curator Elena Gonsales has suggested to solve it on "encore", having added similarity to educational process limiting the size of a leaf  by - 60х80.

The difference from the educational project is freedom. Absence of inevitable practicalness high-grade, even and educational, the project of a building. Therefore the attempt is not the second, it is meditations over a theme, the reflection of experience, whether student's, whether experience of architecture of XX century where the clubs take an appreciable place, whether - judgment of everyday dialogue and dialogue as concepts more likely. It depends on a person . Here comes a variety.

Projects in the catalogue conditionally can be divided into two kinds. Some of them answer a question « whose club » - gentlemen (Timur Shabaev, Meganom), the blind mute deaf person ("A-B"), demonstrators (Katya Ljubavskaja, masterful «Architects Асс»), fans of apertures or birch sap (« Vitruvij and sons »). A tribute of postperestroika from loss high - club of tenants: « … that, from the first attempt today is not necessary ». These projects in a greater degree are literary, they introduce and develop a plot and do examining fascinating.

Other projects think of the concrete architectural form of club. Here should not do without memoirs about Melnikov - these sheets gravitate to precise, hardish, vigorous red-black forms. Are certainly actual fashionable and "speaking" forms - such, as club -"tuber" (potato) Alexey Bavykina, combining witty literality  (a warehouse of potato, a museum of great potatoes and a greater plug) with architecture, thus contrary to all tendencies « … executed without a computer, drawing rule » and even without a compasses …

Jury Grigoryan has burnt the club (the project - one-stage action, the tool - the paper and fire), having concentrated on « reception of new experience and emotions » … Is attempts to count members of club (Valery Kanjashin, Ostozhenka) or to copy their names (the Icing of architects).

According to Elena Gonsales, the project can have continuation in the form of following « the second attempt » - exhibitions with the same conditions and not less sign for architecture of XX century task "garage".
References 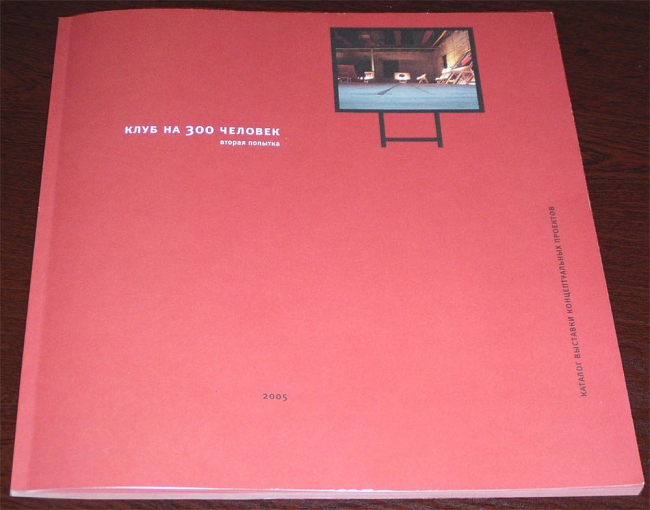 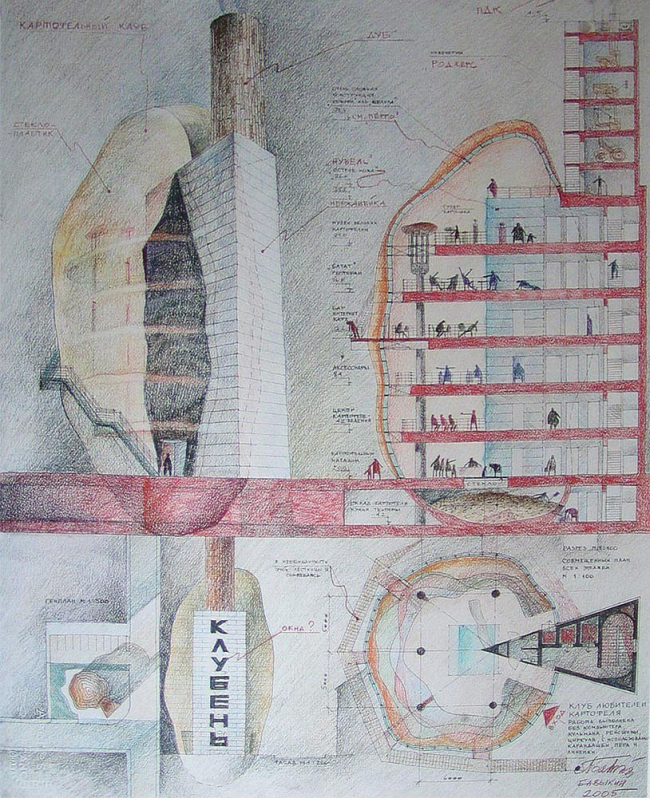