ABD architects along with APA Wojciechowski Architekci, a Warsaw architecture bureau, starts on building the new high-status office centre the 'White Square' in the northern part of Belarusian Square. Very likely, it will become not only the new centre of business, but also the city life.

Belarusian Square is known as one of the up-market places for office properties in modern Moscow. Since 1990, the nearby area has been actively developed. Besides, the perspective that soon there will be much good and modern architecture makes it also prominent. Among the newly constructed buildings, the most significant one is the black-and-white parallelepiped by A. Skoka, the Capital Group's office. Presently, construction of the new commercial office centre has been started on one of the most advantageous parts: right in front of the underground station entrance, between Lesnaya Street and Butyrsky Val. After the construction is complete, the centre will be one of the most noteworthy architectural marks of the Belarusian Square. In fact, there will be another city district developed in the northern part of the Square.

The new area is sprouting up from monotonous rectangle netting of Lesnoi lanes, echoing with rays of main streets, changing fan-like over its top, gathering towards the main cultural site: the Old Believer St. Nicholas Church dating from the early 20th.

The architects retain the lines of Zastavnyi and Treti Lesnoy lanes and closing them for traffic, make new pedestrian-only streets within rectangle areas. One of the streets is diagonally coming through the triangle buildings 'B' and 'C', the other repeats the way, only splits up in the middle. The new streets make the district more penetrable, open for citizens: the lower layers has public space with shops, cafeterias and restaurants. So the new centre of city life is being formed next to the underground station. What is notable, it will not be of a modest style, but classy and respectable, adequate to the business reputation of the place. Apparently, the quality attunes to the marketing name of the Centre - 'White Square' - with all the meanings it may possess. But firstly, it represents its serenity on contrary to the legendary hectic of the Belarusian Railway Station.

'White Square', that will replace the 674 and 675 blocks, gives an impression of a miniature city mostly due to difference in the buildings' height. The ’A’ building looks like the two houses, 15- and 10-storey, grown together. This makes the complex seem to be consisted not of the three, but the four constructions, gathering to the joint centre, to the square in front of the underground station. Where there are unexpectedly appear, like in St. Petersburg, not five, but still four corners.

The significant feature of the Centre is that the buildings have smoothed outlines, which make them bendy and streamlined. The first variant of the project suggested sharp angels, cellular-net-like windows, different colors, and greater height. Also there were to be the three towers soaring over the Square, joint with the four crosspieces on different levels - a kind of vertical labyrinth for the big city.

The final design is far more modest: the main idea represents not a flight, but respectfulness of the comfortable space. It is most close to Art Deco architecture, but with minimum details. The amount of stone elements on facades is almost equal to the amount of glass; windows are ranged in lines, alternating with accented lines of interfloor overlapping. Only on the top there are lines of panoramic vitrescence with the view over the city. The color is sober, of sandstone cream tint. On the lower levels, there will be galleries, column piazza that reminds of Rivoli and many other alike streets of the West. Actually, the project is so self-contained, that it is easy to imagine it being built in any historical world city - Berlin, Paris or New-York. The buildings do not have to tune to the surrounding and do not influence it much either: the interaction with variegated neighborhood is limited by strong confidence in its authority. Just as it is designed, it will be a comfort inside either to citizens or clerks, only the moment they walk past the 'area of influence' of the new district, they will again find themselves on Belarusian Square. 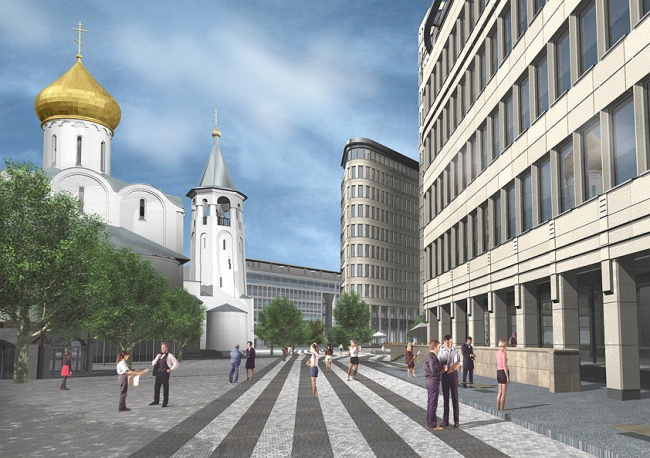 ABD architects. The commercial business center ‘White Square’. Design. The view to Zastavny pereulok (it will be turned into pedestrian street) from Lesnaya Str. 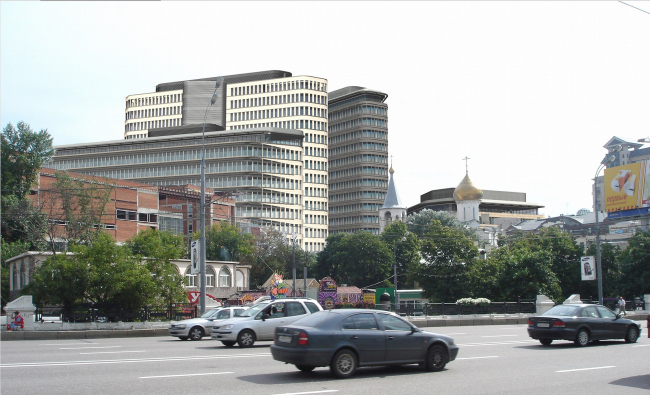 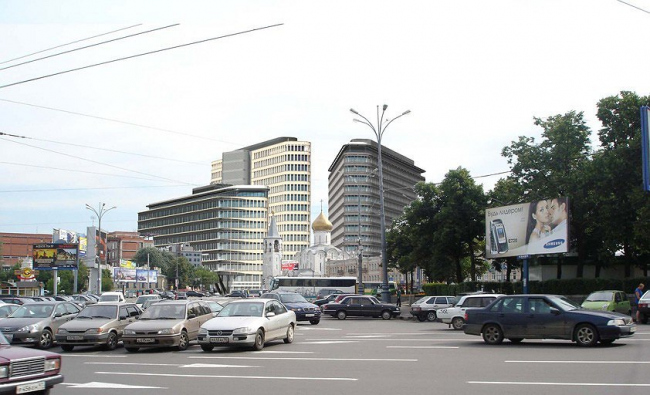 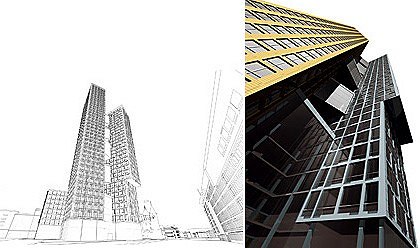