Projecting on a simple rectangular site two inhabited houses-twins, Vladimir Plotkin recovers all the quarter long by the spatial intrigue calculated with an ingenuity of the skilled set designer

Both houses are turned to the Donskoi Proezd by white-red striped facades which are definitely lined by the horizontal lines of brick color marking a level of a floor of each floor, except for the top. The per floor level marking is recovered by a diagonal rhythm of alternation of windows which reminds a step of a huge bricklaying - all together creates a colorful image of modern, but not neglecting with a context of the "smart" facade divided between two houses.

In other, outbuilding facades prevails glassing, and it seems, that they aspire to be imperceptible, similarly to the theatrical mechanism bearing scenery-side scenes, framing performance. The game begins, as soon as the observer starts to move along the Donskoi Proezd: red-white facades that grow together in one, then suddenly separate, opening a view to the new mini-street conceived by the architect crossing the quarter on a diagonal, serially cutting off corners of both buildings. If literally perceive association with side scenes the stage setting appears everything, that take place between two houses. Framing a life of a court yard theatrical side scenes, the author operates similarly to architects of an epoch of classicism and baroque, transforms a life into performance, however the main difference here is that the "participants" of the improvised representation do not suspect about it at all - they are not held down by solemn ritual, and live an ordinary life, spectators are casual, they may not be at all. Similarity with the theatre appears to be decorative, unessential, it can be seen, and it is possible not to notice, it decorates a plan of the architect, but does not interfere in a private life of tenants.

The theme of performance is supported by distinction of height of the buildings - leaving on a red line of travel twelve storey house is on six floors lower then its eighteen storey colleague taking place in heart of a site. From some points of view this difference will be well appreciable, somewhere - opposite, it can disappear, because, submitting to laws of the prospect, the first house "will grow", and the second "will decrease". Thus, for the lack of the present actors, the architecture plays the performance itself. 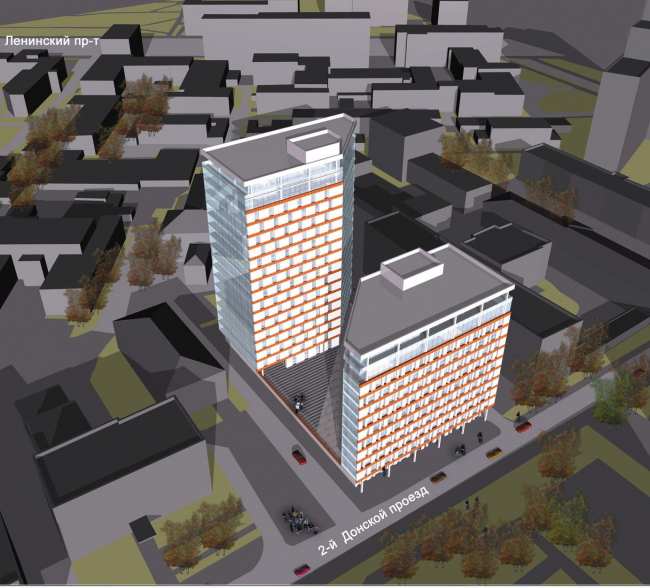