This project was aimed to replace the “President-service” building constructed in 1970 on the site, surrounded by “Mirax-Plaza” complex from the three sides. The presidential service has already moved to the new building, and the place was supposed to be occupied by another office part of the ”Plaza”, under the contract with “Mirax”. It took them much time to choose the project chose long, about year and a half. Among the earlier variants there were the two towers similar to skyscrapers of “Plaza”. Then, there would grow a glass forest, mini-City, at the corner of Kutuzovaka and the Third Ring. But the two last projects were designed by Alexander Asadov and Nikolai Lyzlov, and the final (at the moment when the crisis changed plans of “Mirax”) was Nikolai Lyzlova's project.

The building which would replace "President-service" is a simple and large parallelepiped with a large inner yard. Outside it is covered by a silvery metal grid, Nikolai Lyzlov said he was inspired by the building of embassy of the Netherlands in Berlin, constructed by Rem Koolhaas. The grid is small, and despite some transparency, the facade is absolutely covered, "wrapped up". The effect of protective green net which is used when a building is under reconstruction – it is vaguely seen the inside.

The three walls turned to “Mirax-Plaza” buildings are entirely covered and become an absolutely neutral background for Sergey Kiselyov's more active stone facades. The fourth, the only clear one, which views Kulneva street, and is front has assmetrical rectangular gaps in its new “skin”. They are few, most of them are niches, but there are two shiny glass ledges-oriel windows. Instead of the texture, there are three: net, gap and niche. Together they remind the “sea-fight” game increased many times and joints of grid planes are cells here. The smallest "ship" is the gap of one cell (height of 1storey), and the biggest one is four to four. Lower a few cells merge into horizontal and form entrances. They give the image of scale of the building which, hanging over the entrance looks absolutely cyclopean. The building is a huge package. What is there inside it?

Everything is right, the key is inside. There is a huge atrium, interior, which Nikolai Lyzlov calss “Piranesian”. Must say, the common words “atrium” and "interior" are strange here. But “Piranesian” is fine. Here is the effect is similar to fantastic Piranesi work. It is important, that it is achieved purposely and as a result it is interesting to observe what creates the scarily romantic image within minimalist and modernist architecture.

First of all, the key is its size. There is no net inside and all the 16 storeys are seen and are lined by loggias. This is not an atrium anymore but the indoor area, a part of the city, like a snail retracted into its shell. In general, 16 storey for modern Moscow is a quite a norm. Only when they are placed like mushrooms or boards around the city, when it is possible to look at them from afar, and be interested only in its entranced being close. The story is different here, the space is enclosed and covered outside, the scale is concentrated and makes respect it. We are used to consider a space with ceiling an interior, but it is too huge for interior. The "ceiling" is lined into cells by deep concrete edges, sized about 8 to 8 m each and each could be a room.

Cyclopean roof is supported by the three round columns, each is 3 m in diameter, anyway they look thin on the height of 16 storeys. Columns are built in a line, for some reason, resemble lamp posts – then it is obvious how large they are. But the strongest method, in my opinion, is that the two columns are partially "deepened” into office floors. To one of them stuck a 7storey rectangular beehouse, it is thread right on the column and is hanging on it. The building is hanging on the column and surrounded by the city – a city in city. The bottom part of other column is buried in the mass of storeys which diagonally, like an amphitheater, extend from top to bottom, taking additional space from the atrium.

The giant, closed and cellular space is supposed to be impressing – want to see it constructed at least to see and feel what it is like inside. However, it is enough to have images, moreover, its graphic variant has an additional, “Piranesian” charm (we know engravings by Piranesi mostly). Anyway it is obvious the project was designed to be constructed but can exist virtual world – it has large "paper", and so comprehensive, potential.

First, the new building is absolutely unlike the nearby building of “Mirax-plaza” by Sergey Kiselev' and Sergey Lyzlov said the both authors were happy with the fact. In a way, it is opposite to “Plaza” – it would be more like a palace, despite the intelligent modesty of Kiselev’s project by standards of Moscow last year. ”Mirax-plaza” is a modest project, and the one in its yard is minimalist. It looks like a declaration of minimalism, as well as many other projects by Nikolai Lyzlov. But that is not all.

Second, the project is similar to the building "President-service" of 1970 (one can assure, the last is not demolished yet). It is rectangular, with the same yard, with the same stripes of windows. But, the new project is larger, the yard is roofed, windows are replaced with balconies, covered with the net, but the origin is seen. Even not knowing that Nikolai Lyzlov is a sincere admirer of architecture of 1970s, a glance at the project gives a thought that the architect decided to construct in the place of "President-service" its good follower.

The space of atrium can be considered as a plastic reflection on the theme of modernist architecture and modern city – this covered yard is similar to a piece of street taken "separately", compressed, integrated – it gives emotions. At some point this is a performance – a banal comparison now, but proper here (unlike in many others). And the play is obviously about a modernist city, and characteristic for an anti-utopia horror the author makes into one of the heroes of the work (may be the main). Anyway, this is not a play, but an architectural fancy. And it takes us back from modernism to Piranesi.

The third and the main, in my opinion, feature of the project is its latent (or hidden) classic image. Huge round supports are similar to columns, cells in the ceiling remind caissons, and balconies stepping down the south end are like an amphitheater. Certainly, they are far from prototypes (if there are such), but they intensify impression. Because a pipe for communications and beams of the atrium can be of size, but a 16storeyed column or a room-sized caisson do is suppresses.

Two things come to mind. Architecture of 1970s so beloved by Nikolai Lyzlov were developing from minimalism and brutalism to classicism , but very original. For example, alike square caissons (much smaller) can be found in pavilion of the Lenin steam locomotive constructed by Leonid Pavlov.

And that Russian avant-guard in the end of 1920s was engaged in geometrical clearing and reconsideration of classical forms. Small elements grew and abstracted up to full (or nearly full) unrecognizability, opening geometrical nature.

It seems to me, in the project of Nikolai Lyzlov something is similar – some movement towards to a side where the shadow lays. However, not an image of a church or column is being reconsidered, and romantic spirit of Piranesi’s engravings appears to be very close to modern architecture. 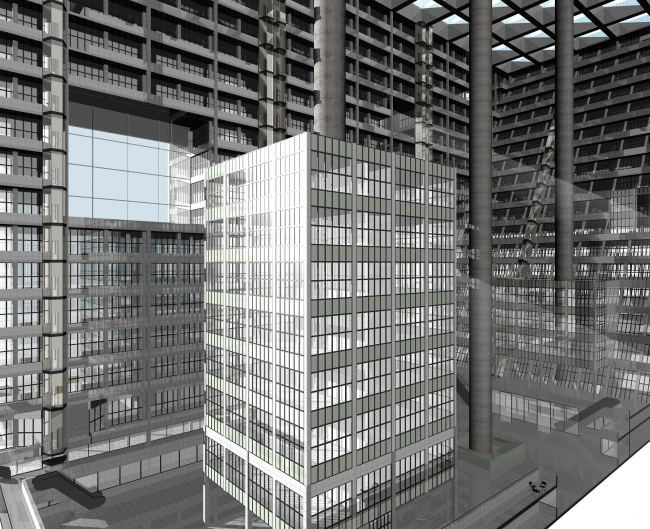 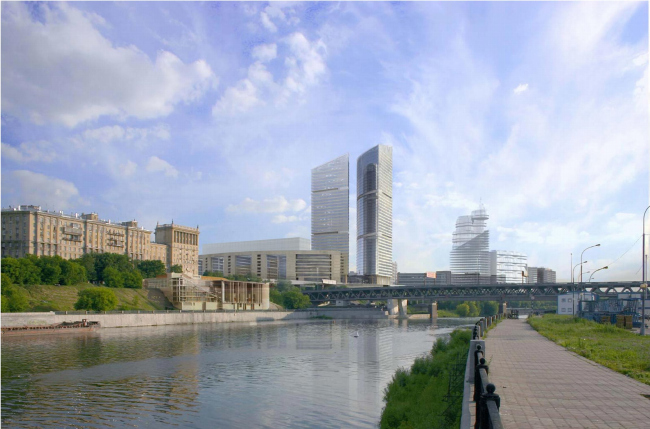 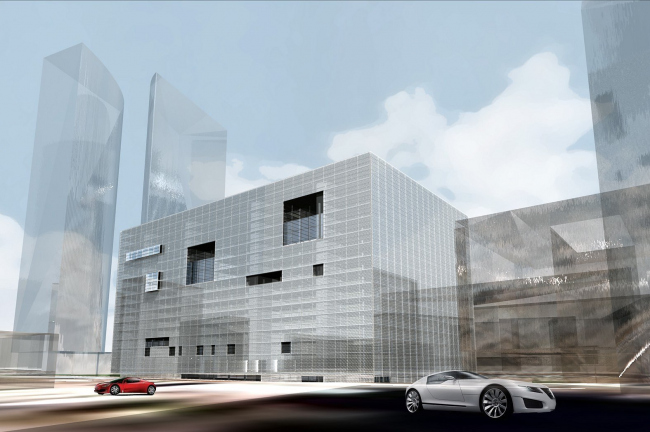 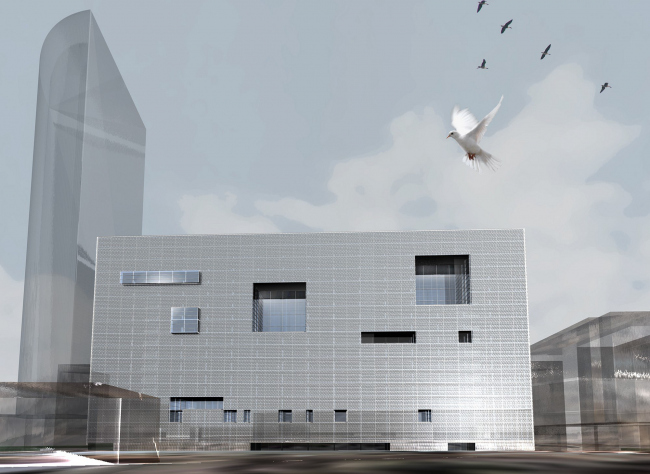 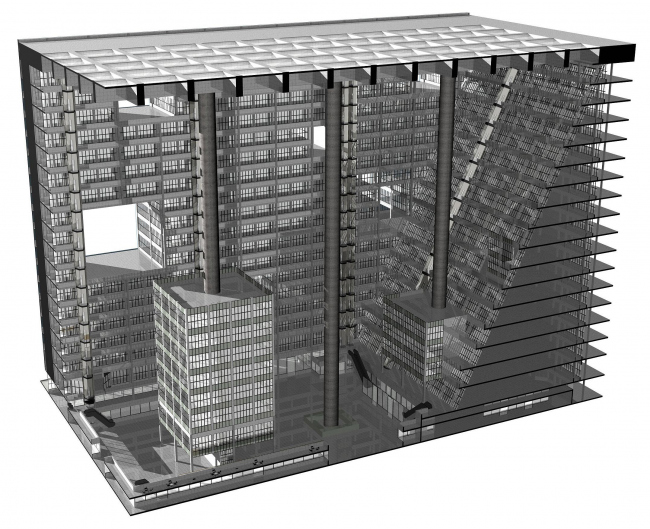 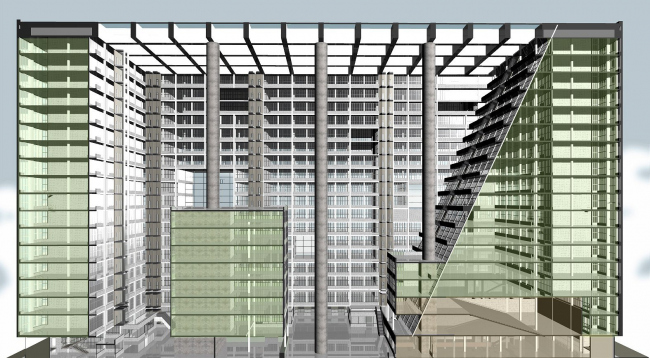 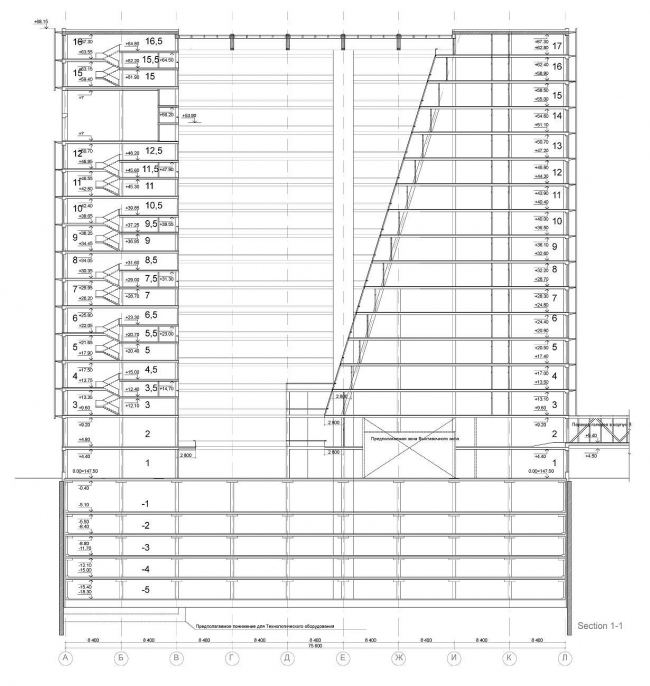