The project of the boutique apartment complex in the 1st Truzhenikov Lane is the architects’ attempt to squeeze a considerable volume into a tiny spot of land, at the same time making it look graceful and respectable. What came to their rescue was metal, stone, and curvilinear glass.

The district of Khamovniki is considered to be one of the most prestigious in Moscow. However, while during the construction boom the developers would build on the territories located as close as possible to the city center, now, when there is not a single vacant strip of land left on Ostozhenka, they gradually shifted towards the central and southwest parts of this district. In the recent years, this area has attracted the most expensive construction in the nation’s capital. Thus, it comes as no surprise that this area is now seeing new projects pop up here and there, the vacant space rapidly shrinking, which, on the other hand, is not much of a problem for high-end residential complexes.

The residential complex that will be built in the 1st Truzhenikov Lane is a vivid example of such kind. The land site allotted for its construction is currently occupied by a miniature two-story building to be soon torn down. From all sides, it is surrounded by various constructions: on the right, there is a five-story house built in the 1990’s, on the left, there is an elongated two-story house; behind it, there is a polytechnic college. In such “reduced circumstances”, what was left for the new construction was only an elongated trapeze-shaped strip of land, and, to make things still more complicated, it is the narrow side that faces the lane. In search of the most effective solution for such a challenging territory, the developer organized a closed-door competition, inviting several reputed architectural companies to participate. ASADOV Architects was one of them. For the record, the concept that was proposed by the company was not chosen to be the winning one. The high-end residential complex in the 1st Truzhenikov Lane

Andrey Asadov shared that the participants were facing a challenging task of designing, on a really limited land site, a boutique apartment complex project with a rather high yield of useful floor space (the total area being 12.300 Sqm).

The neighboring house on the Plyushchikha, composed of several volumes of different size, connected by a metallic pergola, only has 22 apartments in it, which is quite an appropriate amount for a downtown boutique apartment complex. In the new project, the developer expected to get almost twice and a half that number. This was a challenge for the architects.

The construction of the typically-Moscow, winding Truzhenikov Lane, is rather multifaceted. We can see here the surviving pre-Revolution two- and three-story mansions, many of them being used as embassies, the buildings of the Stalin and Soviet periods. Some houses, on the other hand, appeared in the 1990’s and 2000’s, their height being as diverse as the time of their construction. For example, in the perspective of the street, we can see the dome of the miniature Church of the Exaltation of the Holy Cross. However, what stands directly across from the land plot in question is an eight-story house built in 2001 one upon the project by Sergey Kiselev and Partners; next to it, there is a 14-story high residential building. The high-end residential complex in the 1st Truzhenikov Lane. Top view from the side of the Savvinskaya Embankment The high-end residential complex in the 1st Truzhenikov Lane. Top view from the side of the lane

The architects decided to settle down for ten stories, at the same time making the most of the land site: the first floor stepped back from the redline only the distance necessary to make way for emergency vehicles. In the project, the first floor is a public one, the two top floors are penthouses; there is also an underground parking garage. The high-end residential complex in the 1st Truzhenikov Lane. Plans of the 1st floor the parking garage, the standard floor, and the penthouses

From the second to the eighth floor, the house grows thicker, even though it does not lose any of its gracefulness: bay windows alternate with deep recessed balconies, while grouping the floors in twos and threes softens down the sheer perceived size of the building. The bay windows are so big that the house rather looks like a group of towers placed at regular intervals and “bound” between themselves with stone belts at the floor level of the second, fourth, and sixth floors – their residents are getting open recessed balconies. The alternating of the cantilevers and deep pauses makes the volume porous, reducing its presence in space, while the prevalence of verticals ensures the overall slenderness. The high-end residential complex in the 1st Truzhenikov Lane.

On top of the house, glass walls recede far back from the facade line, leaving broad patios before the penthouses. The glass is covered by lamellas, while on the sidewalls, from the street and the yard side, their grid “grows through” with transparent pergolas. 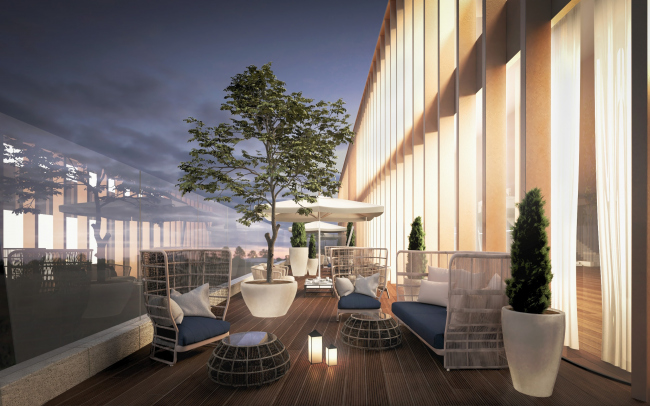 The high-end residential complex in the 1st Truzhenikov Lane. The patio on the roof

The facade decoration combines light-colored stone, copper, and curvilinear glass. The stone, light and porous, looking like travertine creates the outside framework, the verticals being highlighted by flutes. The copper recedes in the background, marking the intermediate floors and supporting the vertical direction with a multitude of lamellas in the ledges of the first floor, on the facades of the penthouses, and the pergola. The combination of stone and metal yields an image that unambiguously refers us to Art Deco, while the reddish color of the copper lightens up the overall composition. The high-end residential complex in the 1st Truzhenikov Lane. A fragment of the facade design

However, the curves of the glass with extremely rare seams bring us back to reality, if not even to futurism – the mercury-flowing substance, looking like some kind of force field, caged in two types of grids, stone and copper, like a Faraday Cage, still remains agile and alive, being the matter that constitutes the basis of the house. Glass also prevails in the decoration of the first floor, stepping forward on the redline of the street with the volume of a small cafe. Behind the cafe, underneath the bay windows of the longitudinal facades, the architects designed pedestrian galleries, which were also to function as the aforementioned emergency vehicle drives.

The project of this house, albeit remaining on paper as a competition proposal, actively develops two architectural directions vital for Moscow. One of them is the excessive construction density on a small land site that must be “packed” into an internally consistent shape. The other is the facade that combines the response to the Moscow buyers and marketing department managers’ love of the Art Deco style, combined with reserved, yet persistent futurism. In the XX century, during its “righteous” historical period, the Art Deco style somehow was unable to develop its full potential – it simply did not have enough clients, and a style that’s commercially unpopular cannot really develop successfully. Therefore, we are probably in for a lot of new attempts to give Moscow the appropriate versions of the prestigious decorative style. Possibly, the image of the boutique apartment complex, proposed in this project, which would have brought a New York accent into the variety imagery of the Truzhenikov lanes, would have been an appropriate answer.
Text by: Alla Pavlikova
Translated by Anton Mizonov