​A House in a Port

This housing complex on the Dvinskaya Street is the first case of modern architecture on the Gutuevsky Island. The architectural bureau “A-Len” thoroughly explores the context and creates a landmark for further transformations of this area of Saint Petersburg.

Each island of Saint Petersburg, just as any island should, for that matter, has a unique character of its own. If we are to simplify this down to a single word, then the Zayachiy Island is historical, the Krestovsky Island is the one with high-end housing, Elagin is the green one, Kamenny is neoclassical, and Petrovsky is business class. There are also “industrial” islands – blind spots on the map of the city because either it takes a long time to get there or these are restricted areas because there is still some production going on behind the red-brick walls of the factory buildings. These islands seem to live a life of their own; year after year they figure in architectural students’ diploma projects, and make the lists of nontrivial tourist places of interest. However, it was only after the Western High-speed Diameter was built that the chance for successful gentrification of the Gutuevsky Island became a realistic prospect. Which, sadly, cannot be said about the neighboring Kanonersky Island – the new traffic artery only added to its entropy.

At a glance, the Gutuevsky Island looks like it is unfit for housing construction, yet, the deeper you delve into its toponymical history, the more your imagination unfolds. For years, the island lay empty, which is evidenced by its first historical names: Nezaselenniy (literally “Desert”), Kustarnikoviy (literally “Bushy”). In the middle of the XVIII century, it was bought out by the shipbuilder Conon Hugtunen; they moved over a whole trade port from Kronstadt to this place, still active today, and life started bustling. Hotels and restaurants were opening, as well the Merchant Eliseevs Warehouses, a sewing mill, a cotton-spinning factory, a brewery – all these were fine specimens of red-brick architecture, recognized as cultural heritage sites, authored, among other architects, by Julius Benoît and Konstantin Niman, who built the famous Pel Drugstore. The romantic “port” context of this place was also influenced by the Soviet construction. Standing along the most “lived-in” Dvinskaya Street, there are the University or Sea and River Fleet, the constructivist “House of Culture of Seamen”, and the Empire architecture of “Seamen’s Wives Dormitory”. The spaces between them are occupied by Khrushchev-architecture houses and high-rises of the 1990’s. The centerpiece of this part of the island is the Epiphany Church, situated at the crossing of the Dvinskaya Street and the embankment of the Ekaterinhofka River. Its author, architect Vasily Kosyakov, was famed for his Sea Cathedral in Kronstadt.

The question of dimensions in the historical part of Saint Petersburg is one of the main issues when it comes to evaluating new projects. The forecast for the Gutuevsky Island is almost inevitable densification and upward growth – the house needs to meet the customer’s requirements and the height restrictions. And, because the land site leaves some room for the “maneuver”, “A-Len” could produce for the city council three versions of the new project, different in their volumetric solutions and their facade plastique. The experts opted for the version that was the most “tactful” in respect to the Epiphany Cathedral. According to Sergey Oreshkin, the company will be doing some extra research and drone shooting to take into account all of the important vantage points.

Out of the whole contextual diversity, the architects chose as their basis the “layer” of the Soviet utilitarian period, trying to stay within the limits of “background” architecture and keeping the integrity of the surroundings. The structure of the house is tripartite. The basis is the darker first floor with a gallery of inbuilt premises. The next six residential floors, designed in light-gray tones that is meant to soften the deep shadows of the counter ligh, are perceived from the Dvinskaya Street as a simple rectangular volume. The eighth floor with terraces and apartments commanding beautiful views is shifted to the edges of the “flanks”, the farthest from the street, which leaves the space for seeing the church. The orientation of the terraces is still being considered: from the south side, there is more light, and from the north, the panorama is more picturesque.

The facade grid, very plastique due to small ledges and recessions, is made more sophisticated by a slight shift of some of the windows, which divides the main volume of the building into two three-story parts, as well as by colorful fills that feature different textures. The house refers to the “comfort” class, which once again testifies to the client’s faith in the potential of this place. There are plans for using expensive materials: for the basement floor, the project will use rock-face ceramic panels with wood-imitating fills; the upper floors light-beige tiles will be used, and the windows and stained glass panels will be made of aluminum painted graphite. The balcony railings will be pristine metallic grate. The facade reflects the logic of the inner construction: almost all of the floor plans for this house were developed in accordance with the “Ideal Homes” program, and the range of apartments turned out to be quite diverse. Wide window apertures only appear where it is really necessary – in common rooms or in dining rooms. The corner windows, a rare technique for the modern houses, seriously influence the zoning of the premises, at the same time yielding a lot of natural light and panoramic views. The yard opens up southward, which makes it possible to fill as many apartments as possible with natural light. In addition, there is a possibility that with time a green zone, common with the neighboring houses, will be formed. There is an underground parking garage; the developer also drew up a contact with the city for the construction of a school or a kindergarten. 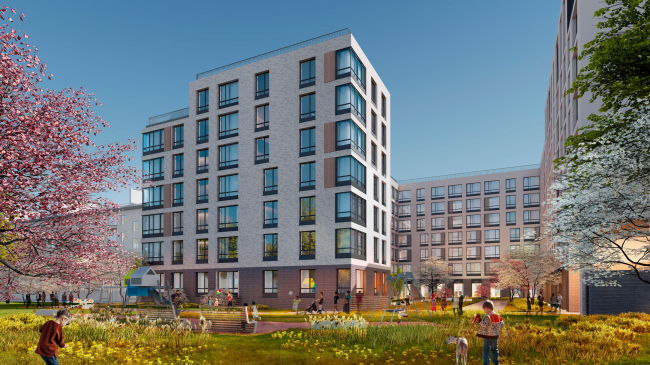