In the Moscow area, the architect Roman Leonidov designed the “Cool House” residence, very much in the spirit of Frank Lloyd Wright, spreading it parallel to the ground, and accentuating the horizontal lines in it. The color composition is based on juxtaposition of warm wood of a honey hue and cold copper blue.

The name Cool House is not connected with the cold color of copper in any way; it’s just that the first word is part of the client’s surname. Belonging to the family of a top manager of a large company, the house is situated in the Near-Moscow area, meaning, one can easily travel to work or to school from it, and therefore, use it as the place of permanent residence. The house was in construction for 4 years. It is surrounded by a domesticated settlement, neatly landscaped, and without tall fences; therefore, it was possible to turn the grand facades towards the road. The house is a single story one. A while ago, staircases were quite popular, but now they fell out of fashion; besides, climbing up and down the stairs all the time is not really convenient, and, if the size of the land site and the budget permit, it is much more convenient to move around horizontally. Thus, the volumes of the house sprawl out horizontally, very much in the spirit of a “house in the prairies”, rising in height wherever necessary and getting a double height.

The house is placed on the land plot in very ingenious way. On the plan, it looks like a cross of an irregular shape, dividing the garden into four unequal areas. In the largest area (bottom left corner of the plan), there a grand lawn on the uneven terrain, with a picturesque pond surrounded by trees, a gazebo, a swing, and other pleasant things of such kind. There is something scenic about this lawn. The glass doors of the main rooms of the house exit here: the living room, the master’s bedroom, and the children’s rooms, from which the residents can appear very much like actors on stage. 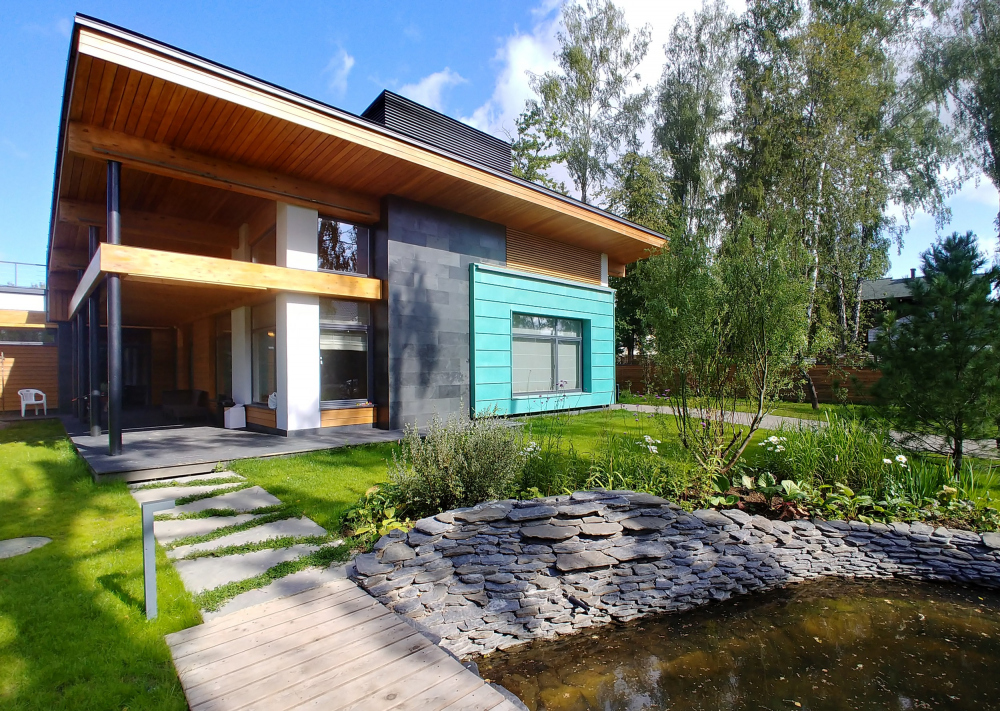 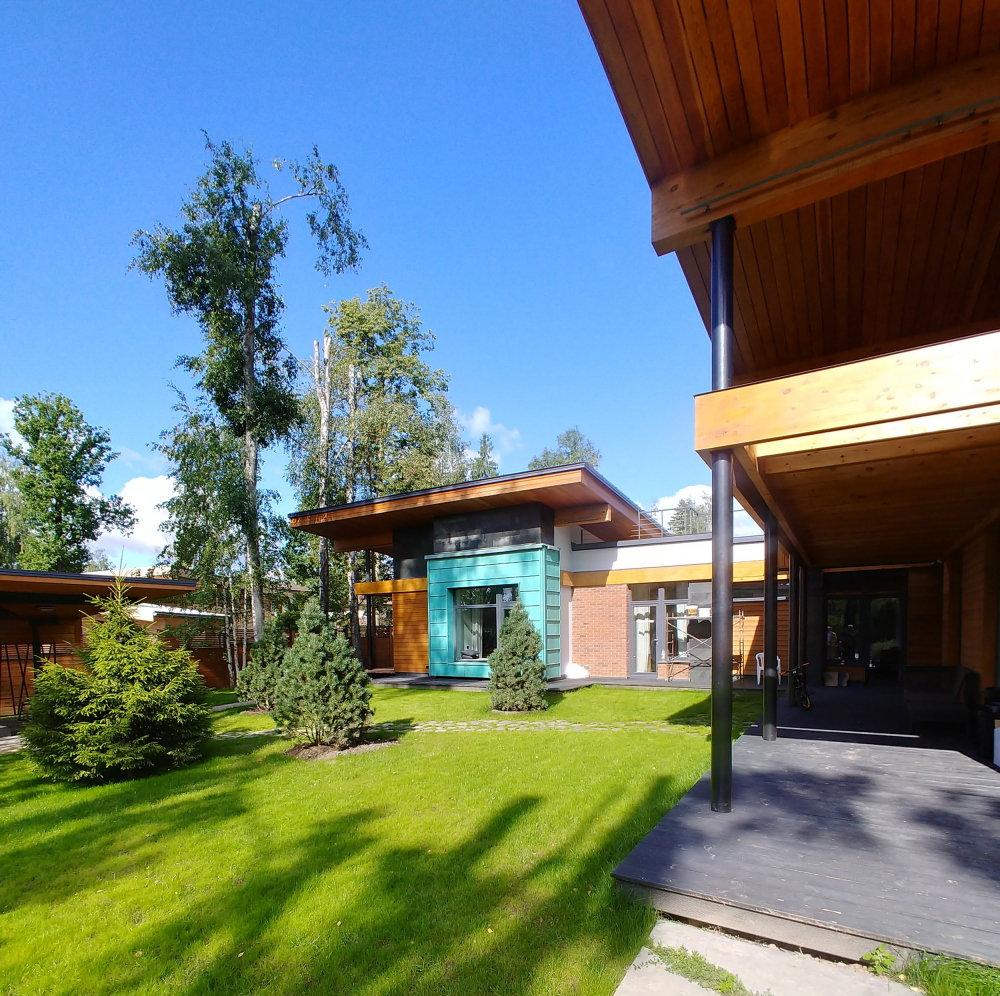 The second area (upper left corner) is essentially a quieter secret garden for family recreation, with a secluded terrace, to where one can exit from the spa or two baths (one inside the house, the other outside. The house becomes a natural border between different parts of the garden – and one must admit that it’s a very effective way to make sure that one’s gaze does not gets stopped by a fence all the time, which otherwise would have been inevitable on a 23 hundred square meter land plot. This way, however, pieces of a garden appear, many of which have panoramic glazing. Meaning – instead of a fence, one can watch life in the house behind the glass, as if one were inside an atrium. The cross-shaped form of the house also allowed the architects to make a designated car entrance on the right side of the plot. The entrance driveway comes up against a garage, joined by a boiler house and other maintenance rooms with individual entrances. This is also the place where the main entrance to the house is situated. The grand part of the house consists of three blocks: the public, the children’s, and the parents’ ones. The recreation area with a guest room next to it is situated in the depth of the house. People who come or drive in are met by a tall public block with a single-slope “canopy” roof, which houses a large space that is both a living room, a dining room, a fireplace room, and a kitchen. On the facade, one can see the main motif that gave the image to the whole house: the warm honey-colored wood, set against turquoise patinated copper. The accentuated horizontals of the roof and the reinforcement beam are offset by white verticals of the corner and the slate-black chimney of the fireplace. The extra beam was introduced in order to reinforce the horizontals, which would make the composition tripartite. This “tripartite” principle is something that Roman Leonidov deems imperative for a private residence. 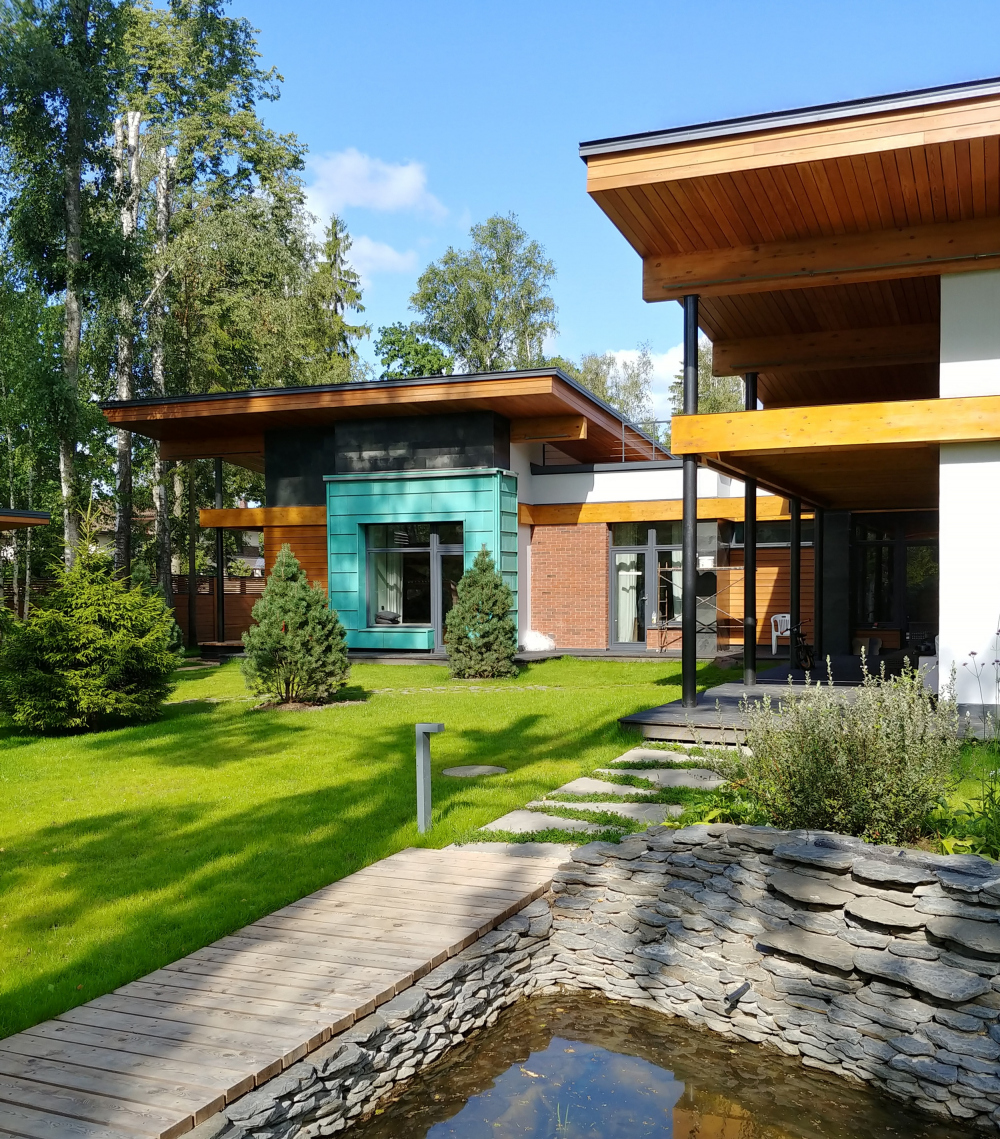 A similar “honey and copper”, image yet on a smaller scale, marks the facade of the parents’ block: the same patinated copper and warm pinewood, the same horizontals, and the same upward sweep of the canopy roof. Also, in that remotest corner, in the most protected part of the house, one will find the master’s bedroom with a bath and the master’s study.

At this point, I will allow myself a sociological digression. In his book “Pattern Language”, iconic for architects, Christopher Alexander writes that, in order to avoid quarrels, each of the spouses must have a private place of their own, plus a room for the two of them, plus the space for the entire family. In Russian homes, however, there is usually only one study – the man’s. Boudoirs are few and far between. But where does the mistress of the house has to work and recreate? Of course, this is question is not addressed to the architect, but, rather, to our gender reality.

As for the appearance of copper in the design project, Roman Leonidov explained it like this: “When we were discussing this project with the client, he indicated that the house was to be bright, joyful, and warm. And this meant that you needed a contrast, a cold accent. The honey hue of the pinewood looks all the warmer against the backdrop of cold patinated copper. In addition, copper is a great material to flank the building.” The public and the parents’ parts of the house are connected by a lower unit with the children’s rooms. Thematically, it is less dramatic than the copper facades, and it looks like a transition between the two larger units. Here, at the client’s request, the architect introduced brick – the fifth material (and the fifth color), which the architect himself deems excessive, at the same time admitting that it does add to the tactile feel of the house.

In the architectural form of Cool House, one can see a musical principle: the exposition of the main theme – “honey and copper” – is given in the main public building, then the middle part, the children’s room, is given in different materials, then the reprise is given in the parents’ block. Yet another place where the “honey and copper” theme sounds is the guest room, whose doors open to the minor garden at the back of the house. There are many terraces in the house. The building is surrounded by a boardwalk that gradually turns into a terrace under an awning near the living room, and a spacious terrace behind the house. And on the flat roof of the children’s part, the recreation area, and on the roof of the garage, there is yet another terrace, half wooden, half grass – in fact, yet another lawn commanding beautiful views of the surroundings. In the volumetric composition, horizontals are highlighted. One of them runs in a yellow stripe over all of the facades, binding together the the public, children’s, and the parents’ units. Roman Leonidov regards horizontals as a necessary and natural condition of a private residence. The spirit of Frank Lloyd Wright, although without direct quoting, is felt quite strongly, and Roman Leonidov often says that “we all have been wounded by Wright.” Both in his early and late periods, the great American architect would avoid designing archetypal housing with prominent gable roofs, eyes of the windows and mouths of the doors; what he did was arrange the parallels of the roofs, windows, and podiums in respect to the ground, replacing the anthropomorphic with the landscape-related. Similarly, Roman Leonidov, in spite of all the variety of his projects, stays true to the horizontal approach when it comes to designing private residences.

Text by:
Translated by Anton Mizonov