Designing the house on the Serpukhovskoy Val street, quite small by the modern Moscow standards, Aleksey Ginzburg skillfully inscribed his creation into the perimeter of the Khavsko-Shabolovsky residential area, at the same time accentuating the difference between the new house and the surrounding Soviet buildings with a wave-like cut of the roof. The small-sized land site for building a house on it appeared after the Soviet “automatic telephone station”, built in the 1950’s, was torn down – it stood in the same row with the houses forming the outside contour of the Khavsko-Shabolovsky residential area along the Serpukhovskoy Val Street. As is known, the houses in this residential area are turned at a 45-degree angle in respect to the grid of the streets, forming an original system of rectangular and triangular yards. However, the perimeter construction was never finished by the ASNOVA architects, and by the 1960’s new buildings appeared here, the regular brick eight-story houses with their sidewalls facing the streets, which, nevertheless, fell in line with the original town-planning idea. The automatic telephone station stood between them, which prompted to Aleksey Ginsburg the main compositional solution: to fit in with the existing rhythm and the cornice height of the neighbors, also facing the boulevard with a sidewall. However, due to the fact that, rhythm-wise, the automatic telephone station was still slightly at odds with the general construction line because of its smaller size than its neighbors’, and, since the designed house clearly belonged to quite a different epoch, the author, according to his own words, decided to make it “slightly different from the buildings that were already there, yet at the same time similar to them in a peculiar way”. In spite of the unconditional value of the Khavsko-Shabolovsky residential area, inspired by Nikolai Ladovsky’s ideas about the role of the space in architecture – it was these ideas that determined the arrangement of the buildings inside the city blocks – this territory does not have a protected status, and the local construction regulations are not really strict. Nevertheless, Aleksey Ginzburg proposed a very tactful and graceful contextual design solution, not trying to turn the new building into an architectural landmark and not violating the existing structure of this residential area, with space freely circulating between the houses. This way, the modernist construction, not a common sight for the historical part of Moscow, with a rhythmic arrangement of buildings standing with their sidewalls facing the streets (instead of a single façade front) was left unchanged. The slight increase in the building’s height into the depth of the land site is explained by the architect’s desire to make the silhouette more active. Aleksey Ginzburg refrained from using the common technique of making a terraced top of the building with ledges in favor of a wave-shaped roof, for which he had to struggle quite a bit getting all the necessary approvals. However, it was the curves of this specific type that seemed to the authors to be “the most laconic shape that could complete the volume of the building in order to make it as simple as the neighboring houses, yet still slightly different”. Generally, the volumetric solution of the house is more on the reserved side, and the house does not stand out either size-wise, or with its color, or with its shape. Trying to accentuate the fact that the house grows gracefully from its context, the architects reasoned that brick would be the most logical choice as the building material. “We didn’t want to place some bright-colored landmark in such a neatly arrayed lineup, some explosion of color, and that’s why our house is maybe slightly warmer and brighter than the buildings that surround it, yet it grows from the set of colors that has been forming here for years” – Aleksey Ginzburg shares. The brick that the architect ultimately picked for the façade decoration is, of course, not the pale gray silicate type from the walls of Soviet construction but the expensive hand-molded Belgium-made kind. The hand-molded brick is slightly different in its tone, which creates an impression of a variegated and breathing surface, accentuating the tectonics of the wall, especially when it comes to details. “Since we are cladding the house with brick, we also show the tectonics, i.e. how the brick would have worked here if it had actually been a construction material – the architect explains – We, of course, do realize that the wall is layered, but we still want to make a reference to the typology of Moscow houses with their thick walls. We made diagonal window jambs that accentuate the massiveness, and we showed the work of the extra piers with two rows of brickwork underneath the windows”.

Thus, the massive and laconic volume hidden inside these thick walls turned out to be developed in minute detail: the wall surfaces are subjugated to a calm vertical rhythm of the façades pylons, while the brick “funnels”, in which the windows open up, give the walls a sculptural character, constantly reacting to the shifting of the sunlight; at dawns and sunsets, the combination of a delicate, yet ruffled, texture of the brick and the large laconic surfaced of the jambs look particularly great. Making the most of the analogy with the laconic form making of the constructivist residential area, Aleksey Ginzburg introduced a new element into the façade plastique – open balconies. And, what is peculiar is the fact that these were made as “fire escape balconies” with light transparent railing, which, according to the construction regulations cannot be either glazed or merged with the apartments. “The balconies are one of the key elements that make the identity of a residential house – the architect is saying – However, with many Moscow houses that are in construction, we do not have such an opportunity. The very principle of calculating the total floor space in combination with the requirements of commercial development bring virtually everything down to a laconic rectangular shape with the maximum output of useful floor space within the allowed volume. The very fact that we had a chance in this case to legally use the opportunity of making balconies is an extraordinary piece of luck – the massive house got a slight counterpoint, being at the same time guaranteed against having its balconies glazed in all manners by the future residents”. 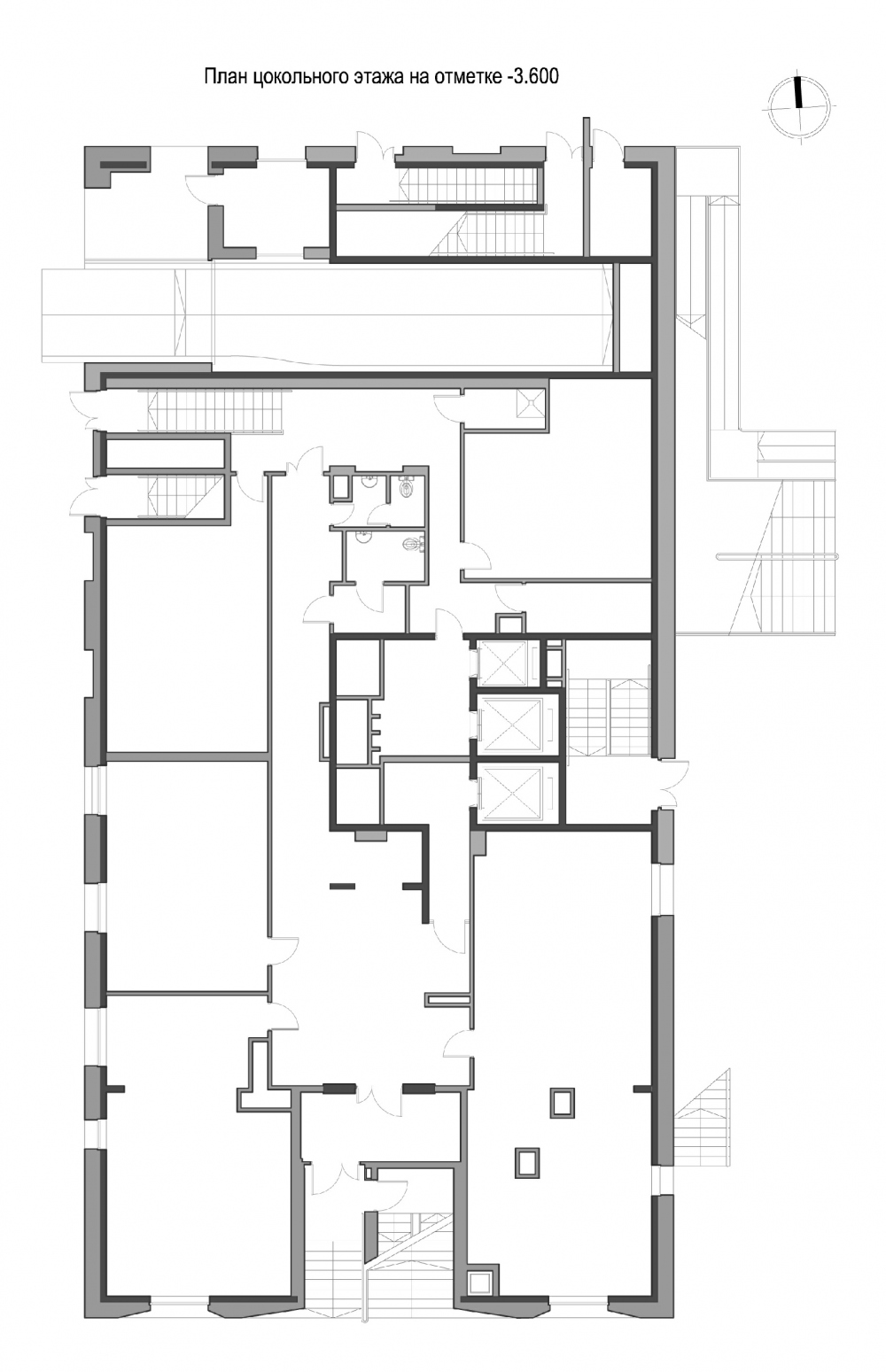 On the inside, the house has a more complex structure than it meets the eye on the outside. The building consists of a nonresidential part, a block of apartments, and still another residential part above them, with a rather complex system of utility lines because each of the functional blocks has an independent emergency evacuation system of its own. Considering the comparatively small size of the construction blueprint, determined by the architects’ desire to leave out a rather large part of the land site for the yard territory, the composition of the building turned out to be compact and far from simple. But then again, on the outside the house looks like a single whole, the only thing that hints at the sophisticated inner system being the entrances, which are individual for each of the parts: the retail and the nonresidential premises on the first and basement floors are accessed from the Serpukhovskoy Val Street; the residential second floor – from the side end, the opposite façade containing the driving entrance to the underground parking garage underneath the yard. It ultimately turns out that the first floor is built in a manner that's not typical for Moscow – from the side of the Serpukhovskoy Val one can clearly see the presence of a lower tier, while in the northwest corner you can easily walk past the concierge: the house is not as closed as usual, and this evokes extra interest.

The house, on the one hand, is very neatly inscribed into the contest – so much so that a casual observer can even miss the newcomer. In this sense, it belong with the typical standard housing stock – one can hardly see in it a typical modern “residential complex”, even if we are to look at the other recently built houses across the road, we will only be able to recognize this thing by subtle nuances, such as the glitter of its glass, a slightly more developed structure of the façade surfaces and the appearance of the bottom floors. Such tactfulness is akin to “working undercover” – probably, this is the only way to reconcile the modern construction with the historical, even if with an example of early modernism.