Roman Leonidov and Pavel Sorokovov have built in the Moscow area an avant-garde house that at the same time has a “pre-Revolutuon” name of “Osobnyak Danilova” (“Danilov Mansion”). In the typical classical environment, such a designer mansion is a sure way to emphasize one’s being different from the others. 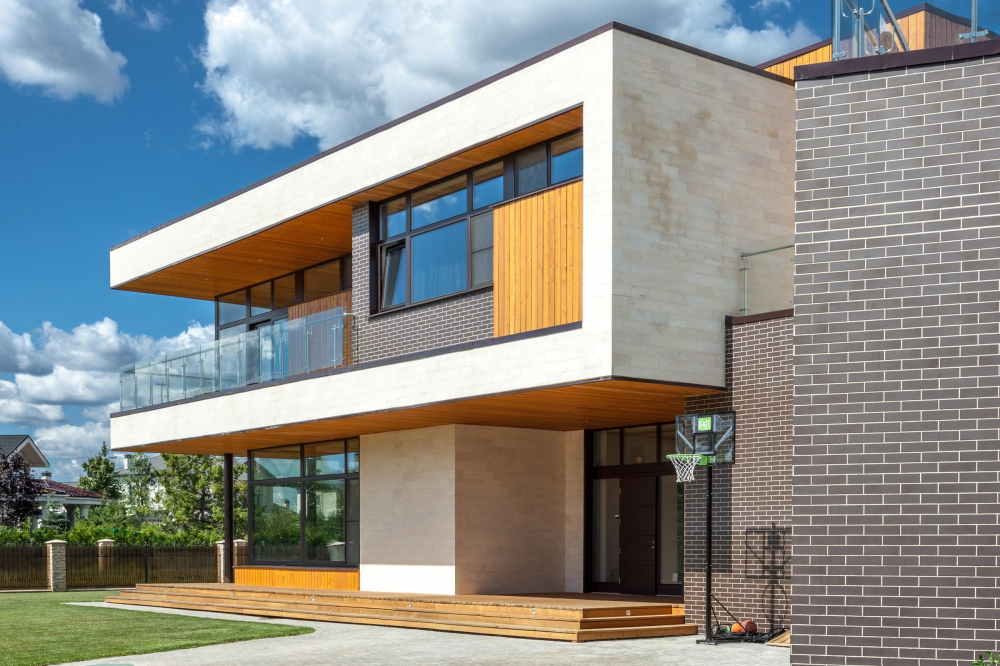 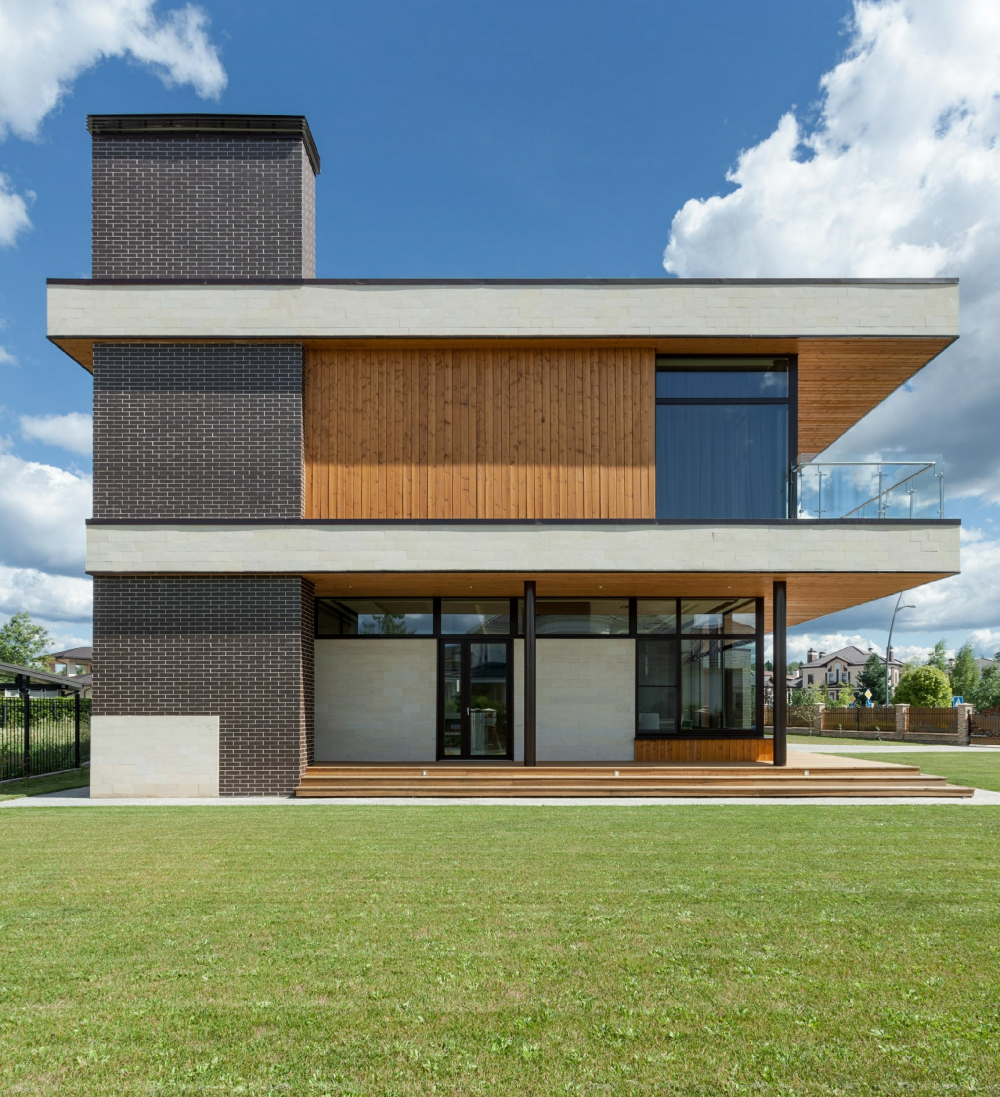 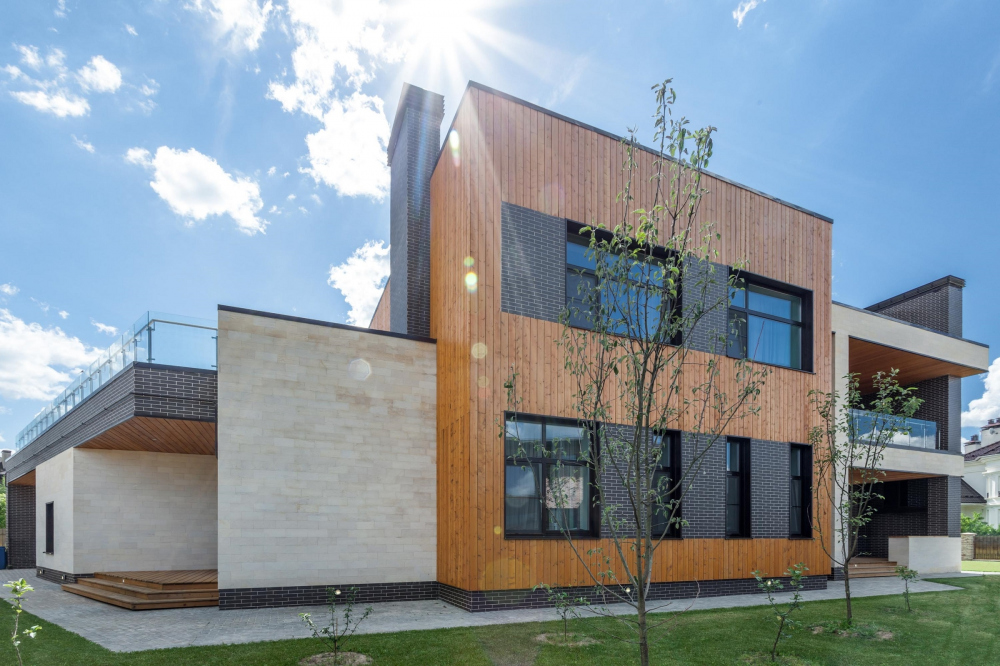 In one of Moscow’s suburban areas that looks like a little piece of Europe and bears an according name (its layout resembling that of “ideal” utopian towns of the early XVIII century with streets spreading like beams from the city center) appeared a house that looks strikingly different from its pseudo-classical neighbors. “Osobnyak Danilova” was the name that the architects gave to the mansion at the client’s approval. This word combination brings up associations with pre-Revolution architecture, a nest of gentlefolk or a town merchant’s house. In this specific case, however, the house has been designed in an avant-garde style; it looks as if it secured a right for starting a new architectural tradition. Situated in this villa community of look-alike houses, this mansion emphasizes its owner’s individuality. The client has opposed himself to the general style of this township, preferring to live in a modernist house, at the same time looking out the window at the classical ones. The positioning of the house is a separate subject. The client chose a land site in the very middle of the township, one that overlooks the whole of it together with its surroundings. Meaning – the house could be oriented with its grand facade towards the park, which is situated in the center of the township, or to the neighbors – but the client essentially opted for the “palace” position, like in Versailles or Peterhof, one that implies that the house is situated in the central point, from where the owner overlooks the distance of the land. With its abundance of glass walls, various terraces and balconies, this house performs the function of a Belvedere that commands fine views of the surrounding scenery. 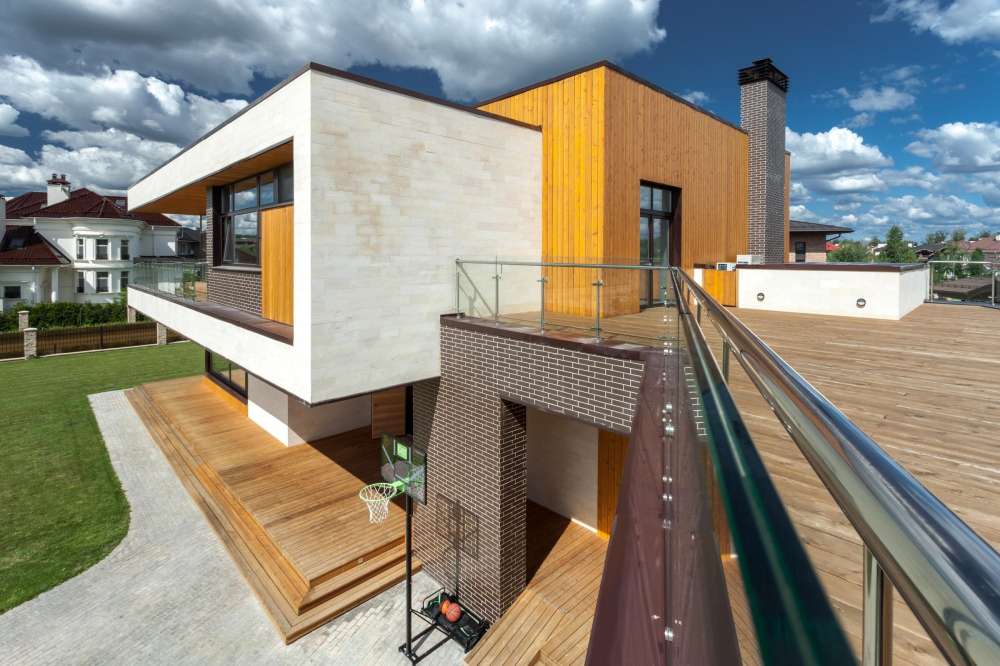 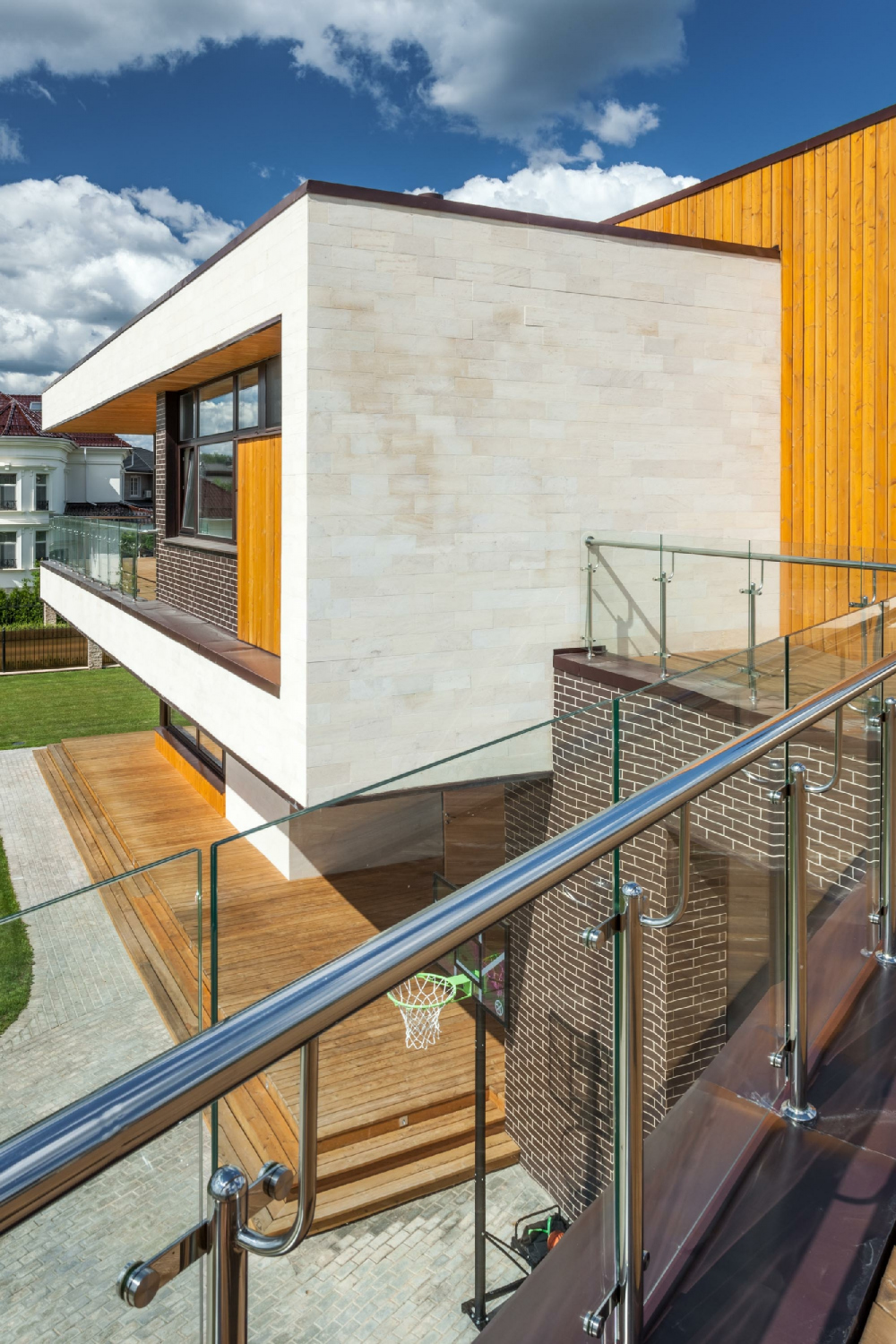 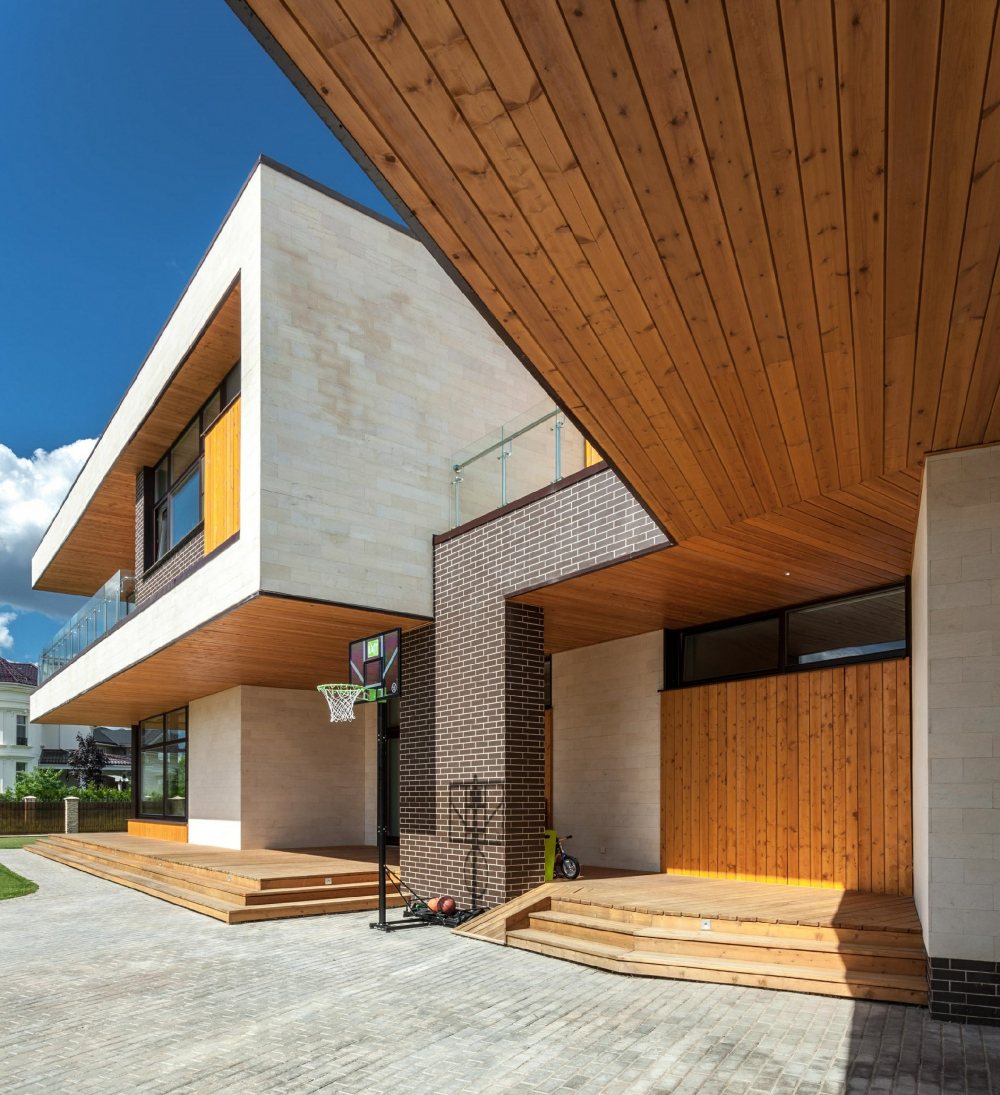 The architects of Studio of Roman Leonidov designed the mansion in the vein of avant-garde principles of transparency, agility, and suspension. The main thing that holds the composition together is a double cantilevered structure hovering above the ground. Its weight and substantiality are emphasized by decoration of white stone. These are two powerful horizontals embracing the second floor and joined together by a vertical; the levitation effect is thoroughly emphasized. The second floor has more body to it than the first one. The heavy cantilevers overhang above the first floor that is sunken in, and is fully glazed. And it turns out that the long cantilevers rest on a glass corner! Psychologically, it creates an impression that the cantilevers have one support in the middle. The effect is almost sporty, like a challenging stunt: such dramatic effect is to be seen, for example, in the Rem Koolhaas villa in Bordeaux. That is, if a mansion has so much “muscle”, it can support such weighty cantilevered structures. 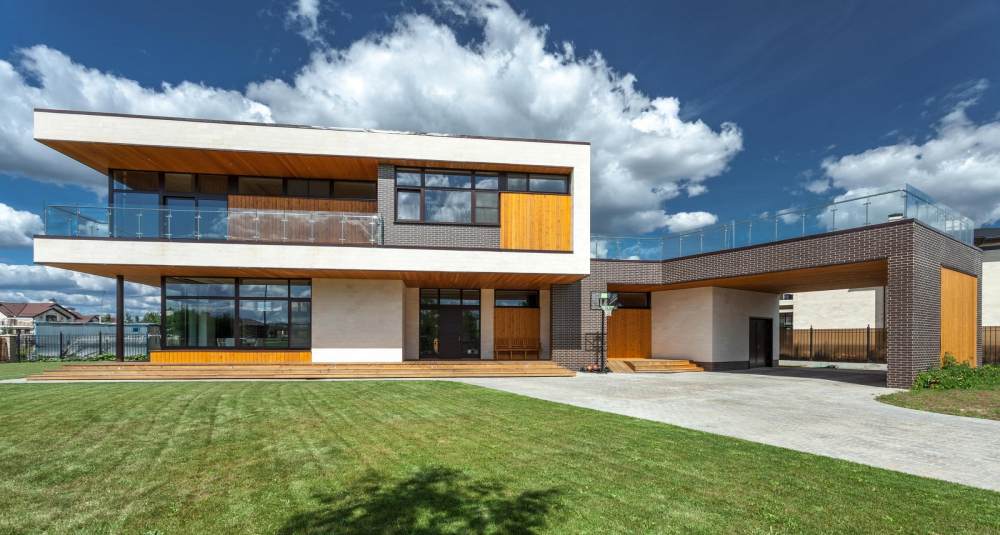 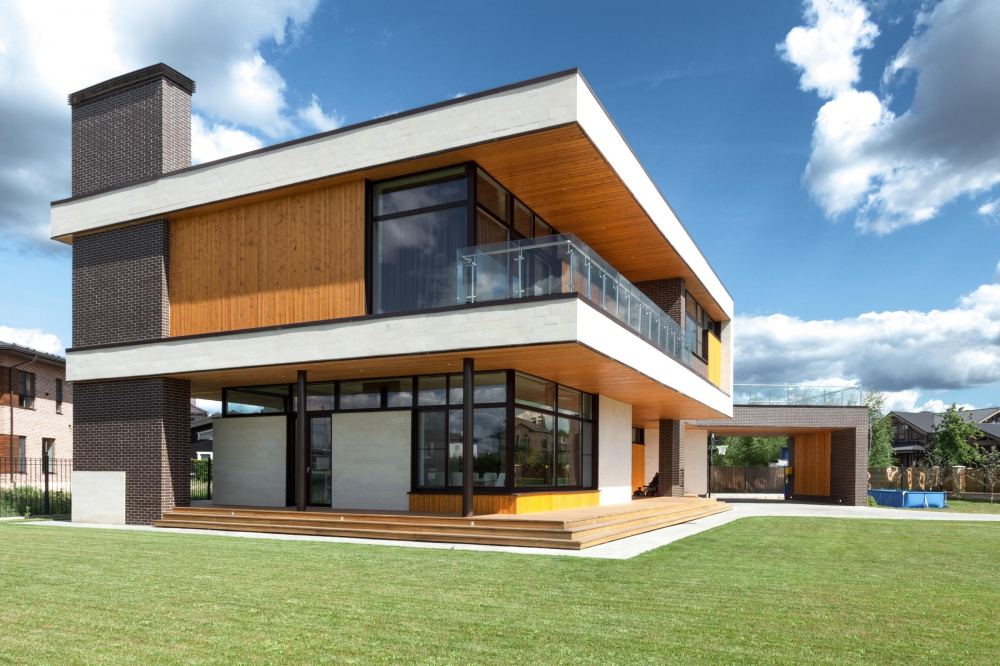 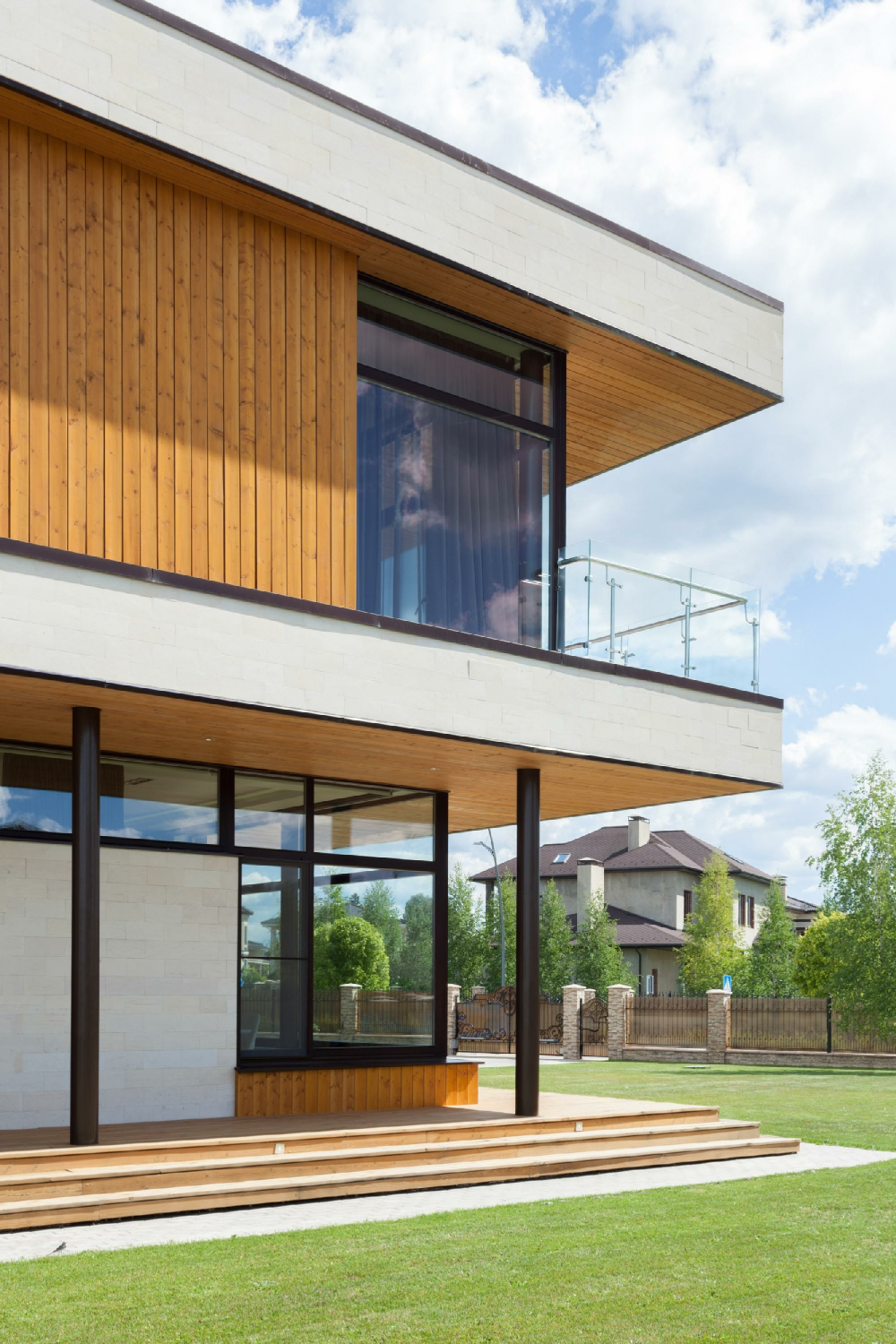 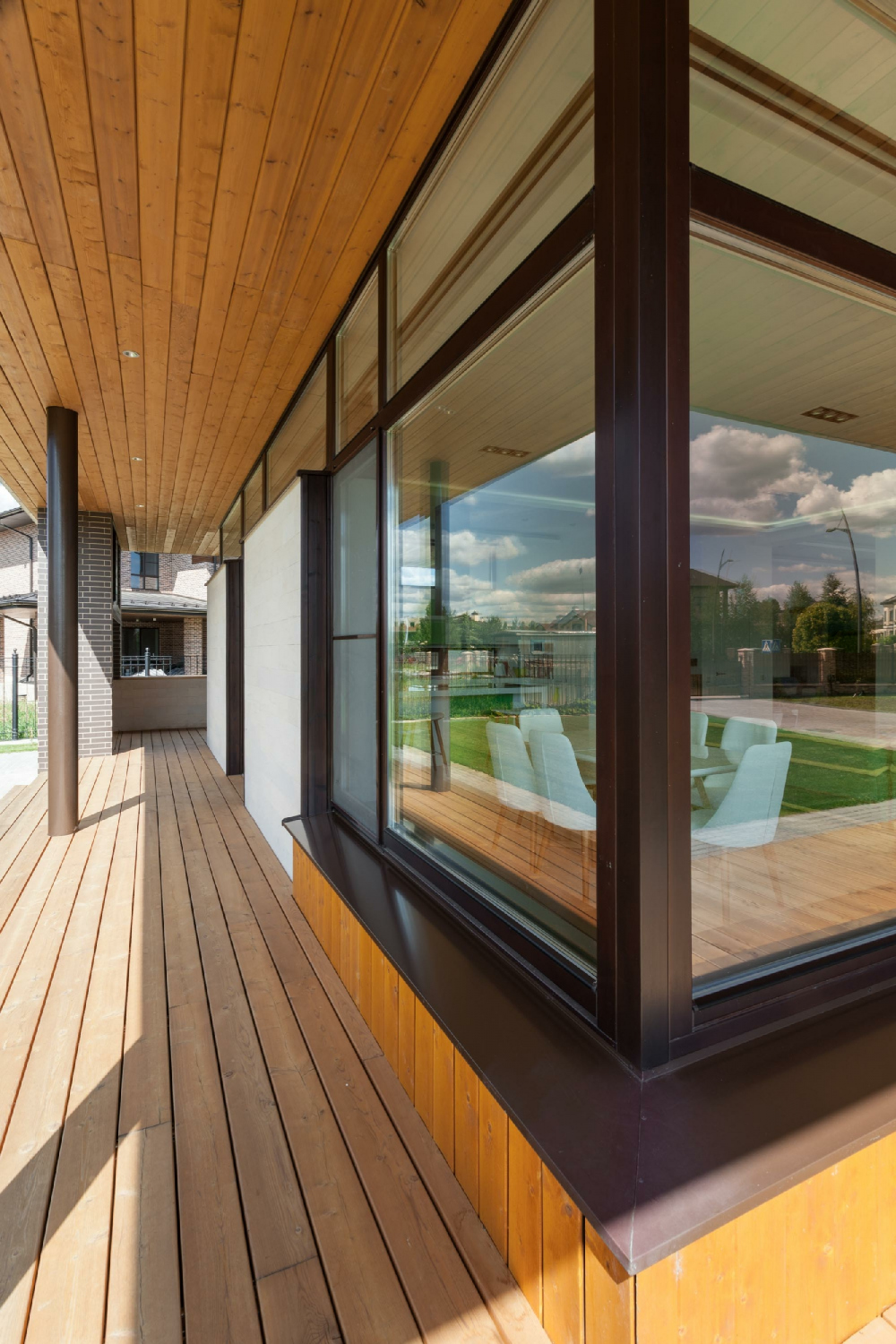 In order to get more space for the future garden, the architects moved the house closer to the border with the neighbors, at the same time placing the garage at an angle to the main volume; on the whole the plan of the house follows the geometry of the site. The public spaces and the guest rooms are situated on the first floor, the private and guest rooms – on the second, sports and mechanical rooms – in the basement. 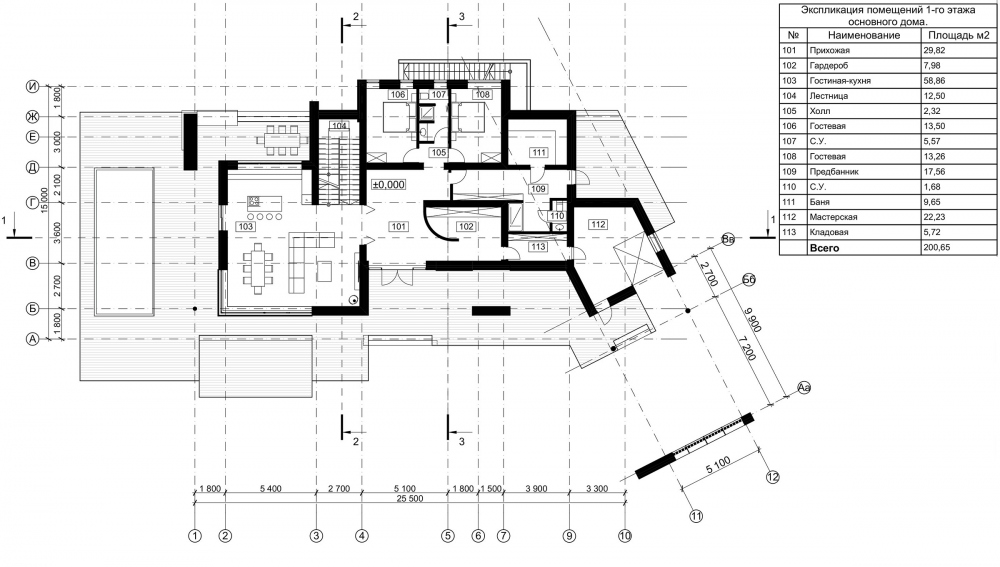 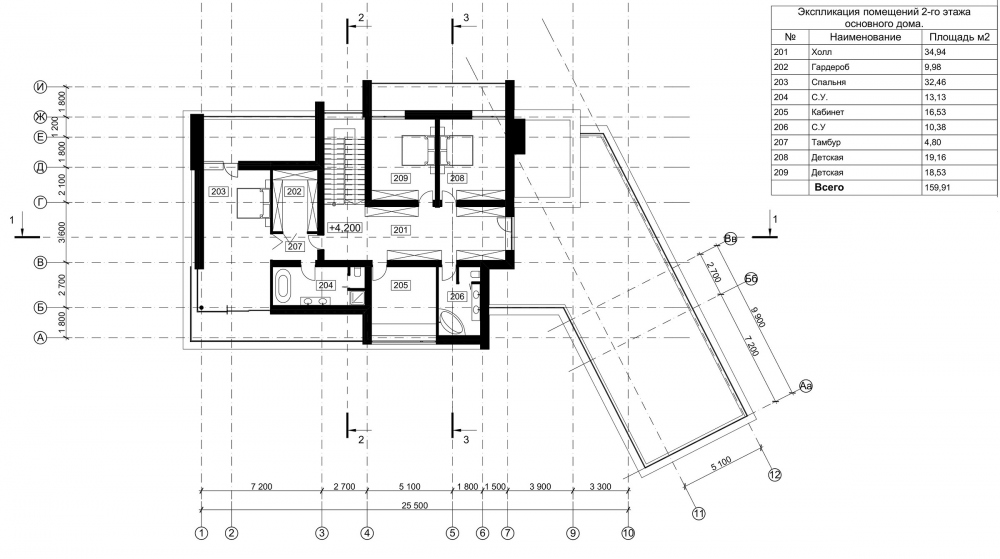 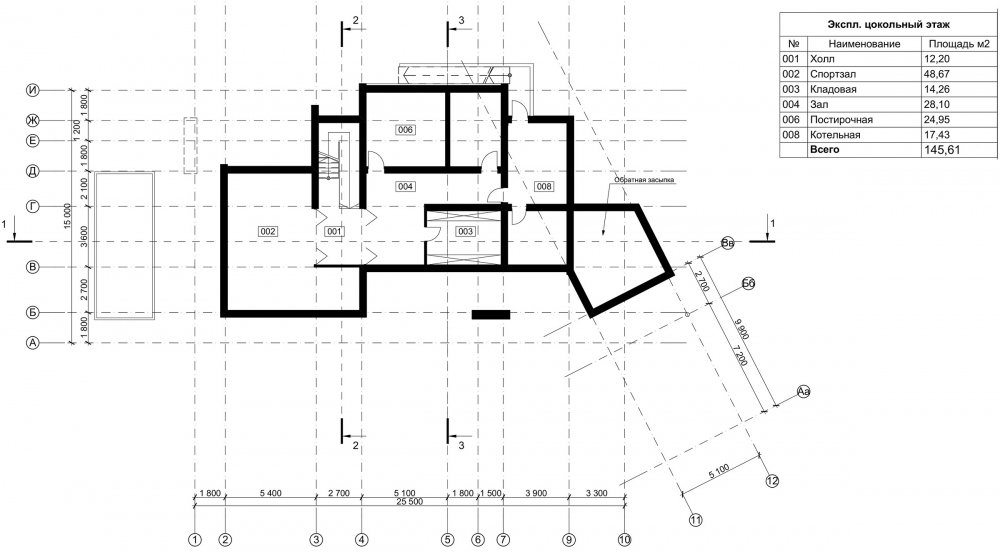 The garage roof supports a large open air terrace with a 360-degree panorama. Generally speaking, there are plenty of terraces and balconies in this house – open and secluded, with and without a roof. For example, the farther part of the house conceals a barbecue place, while the brick wall that covers it up also let served as the fireplace chimney and a vertical, necessary at this place. 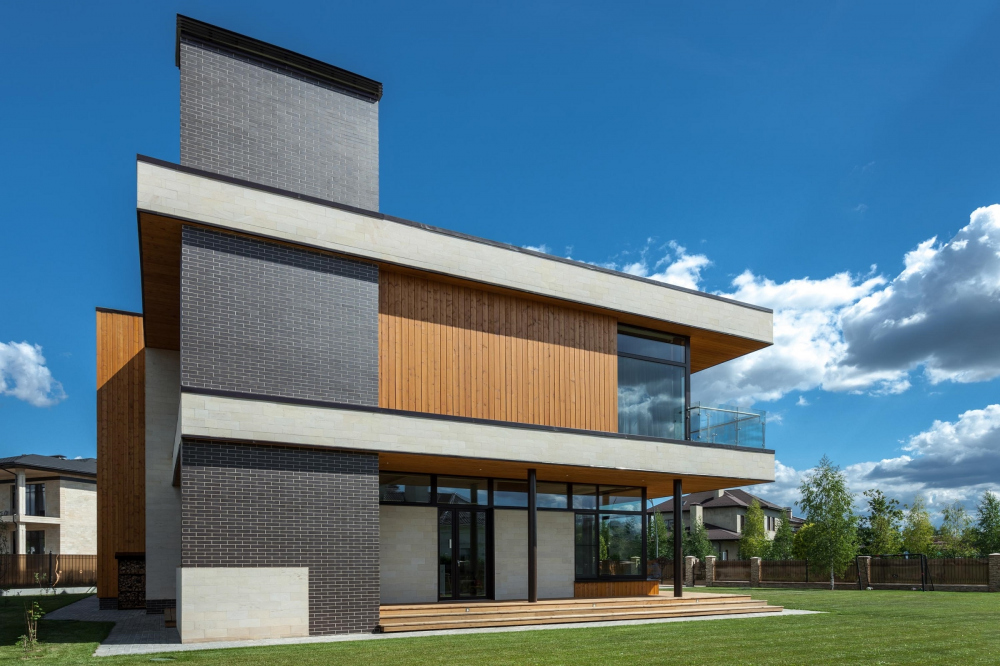 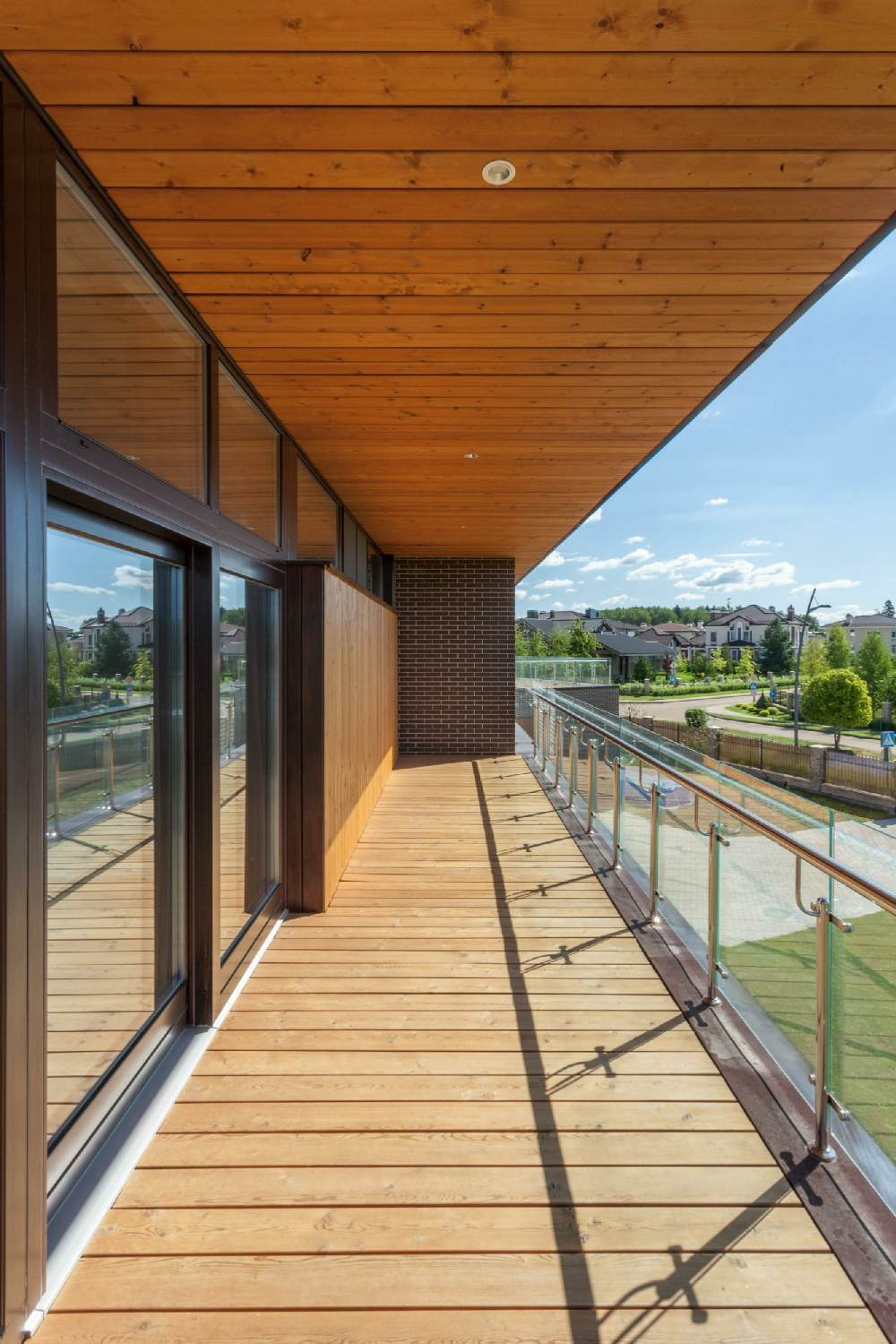 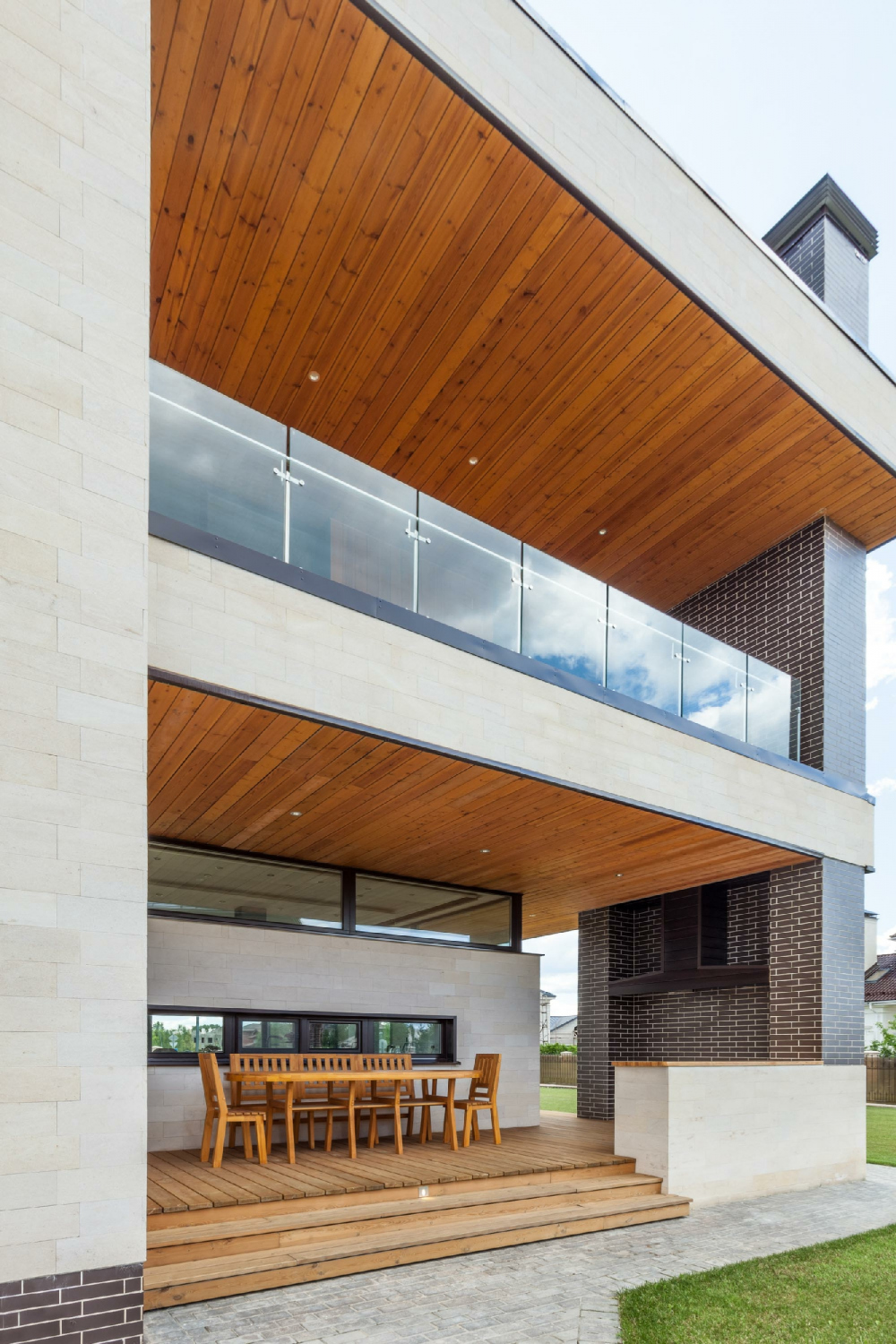 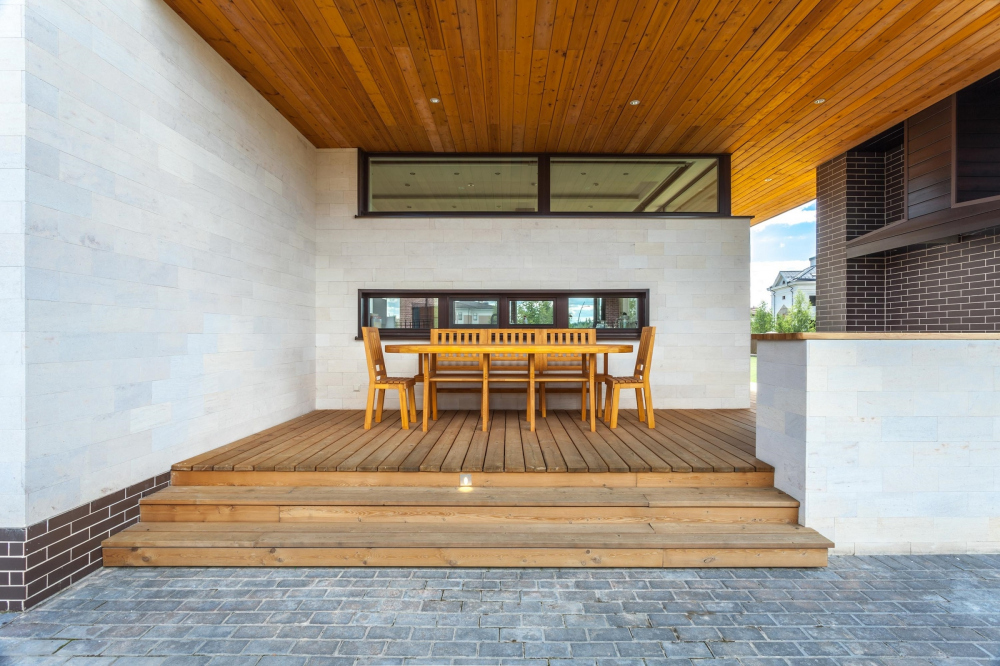 The transparency of this house, not total, yet still considerable, coincides with the grand premises. On the first floor, the already-mentioned glass corner matches the living / dining room that looks just as great on the inside as on the outside. 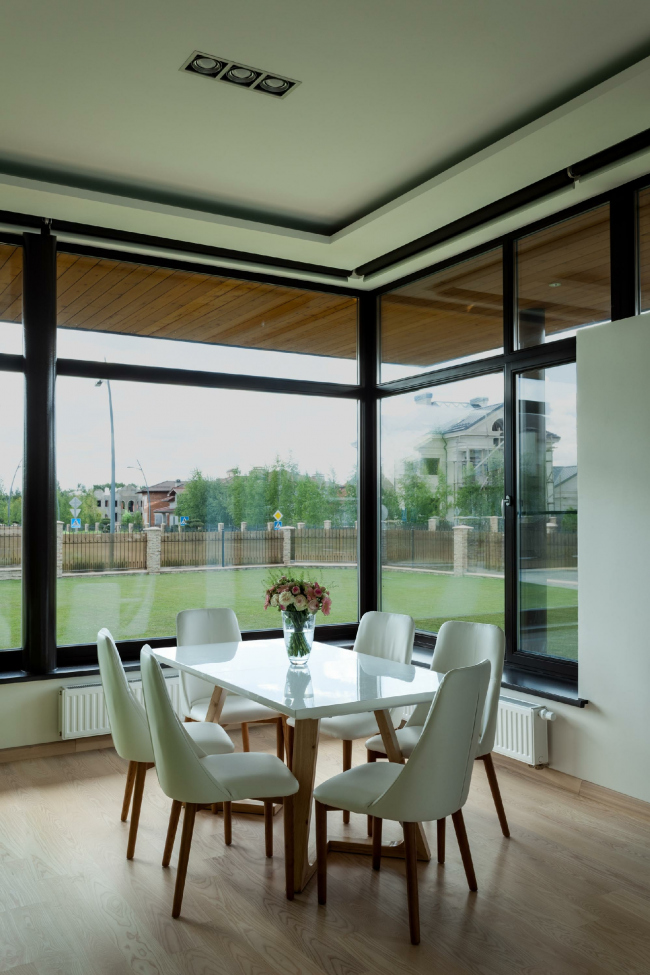 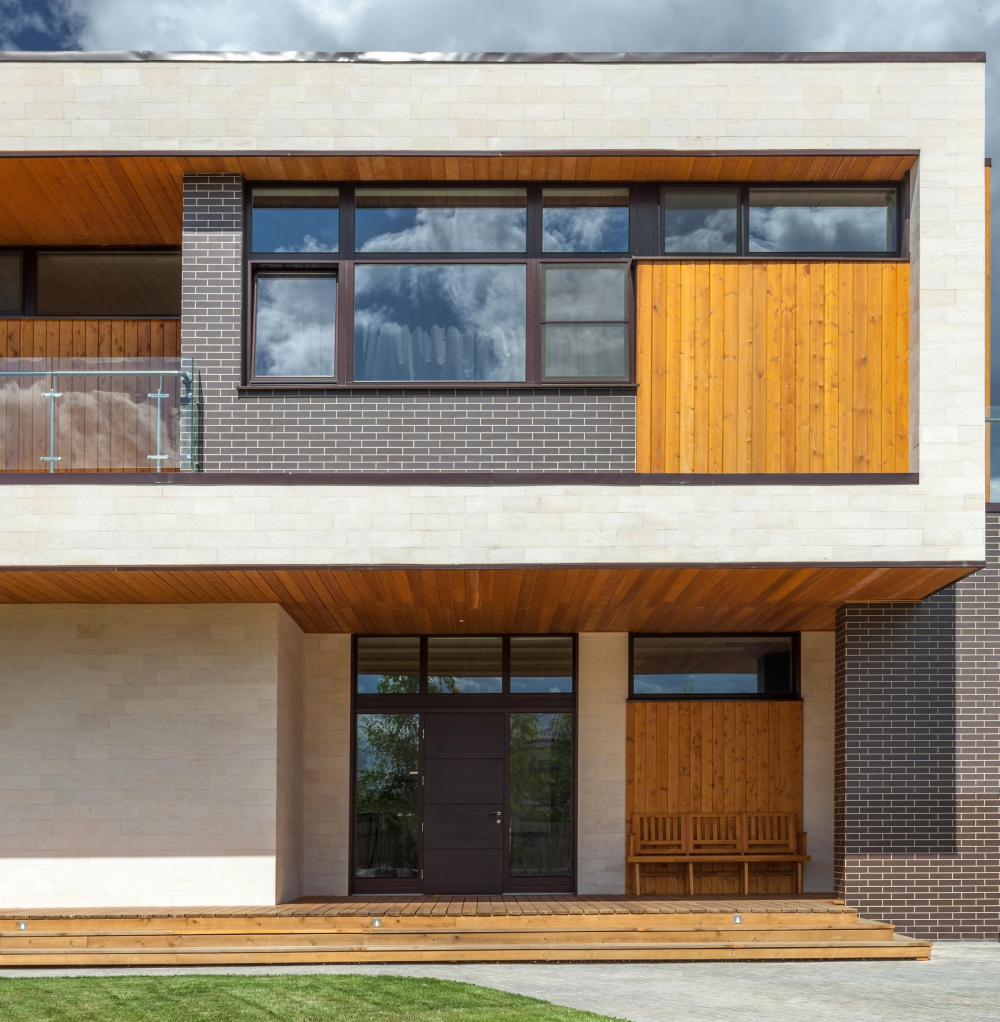 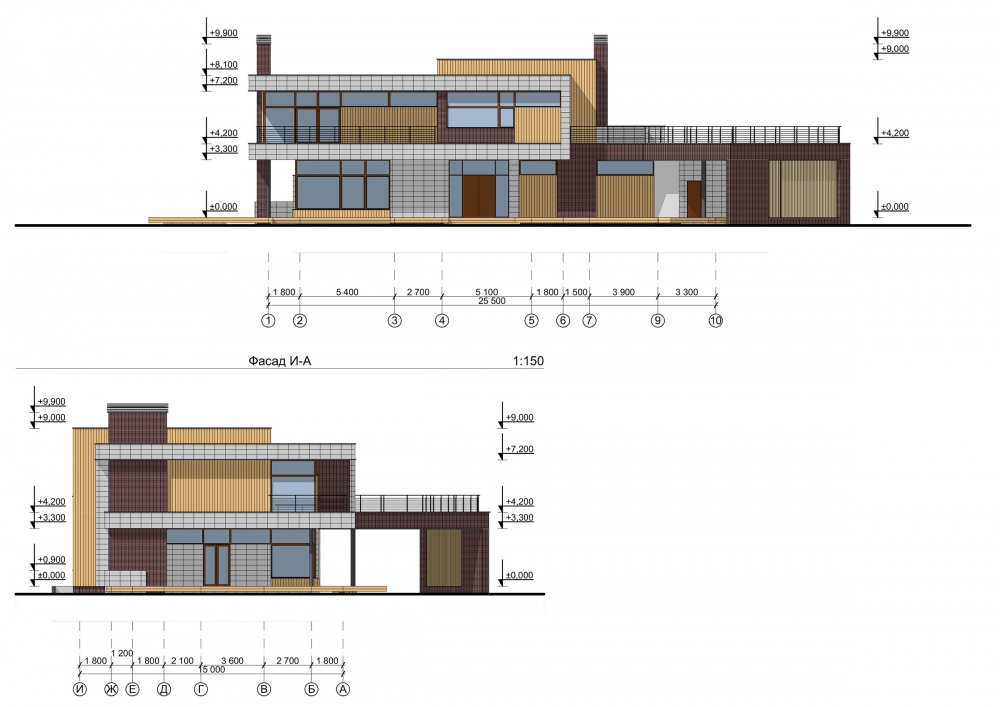 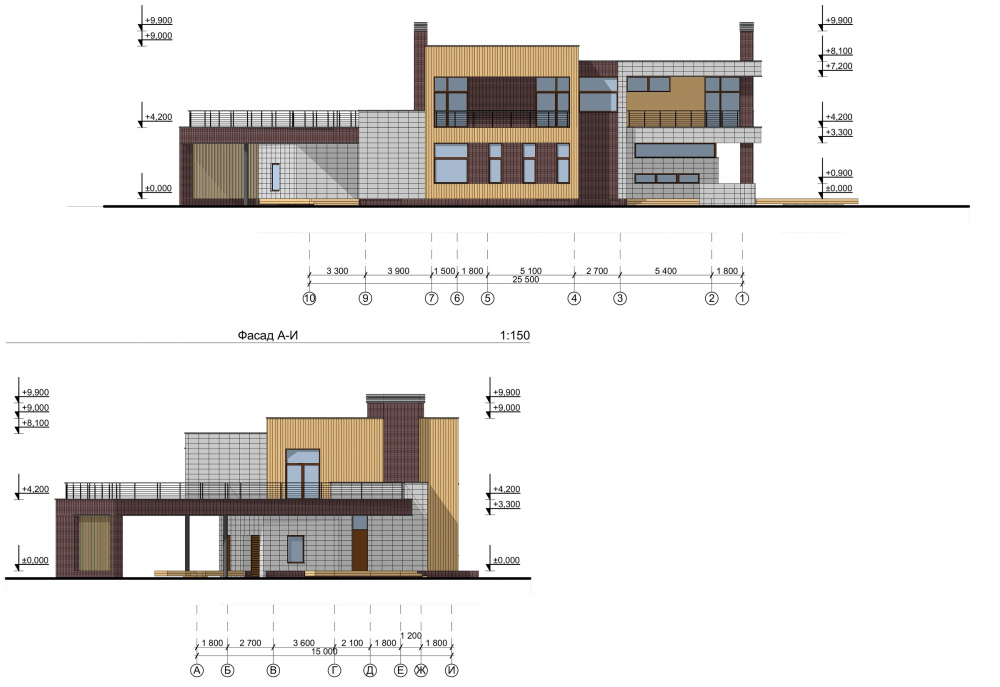 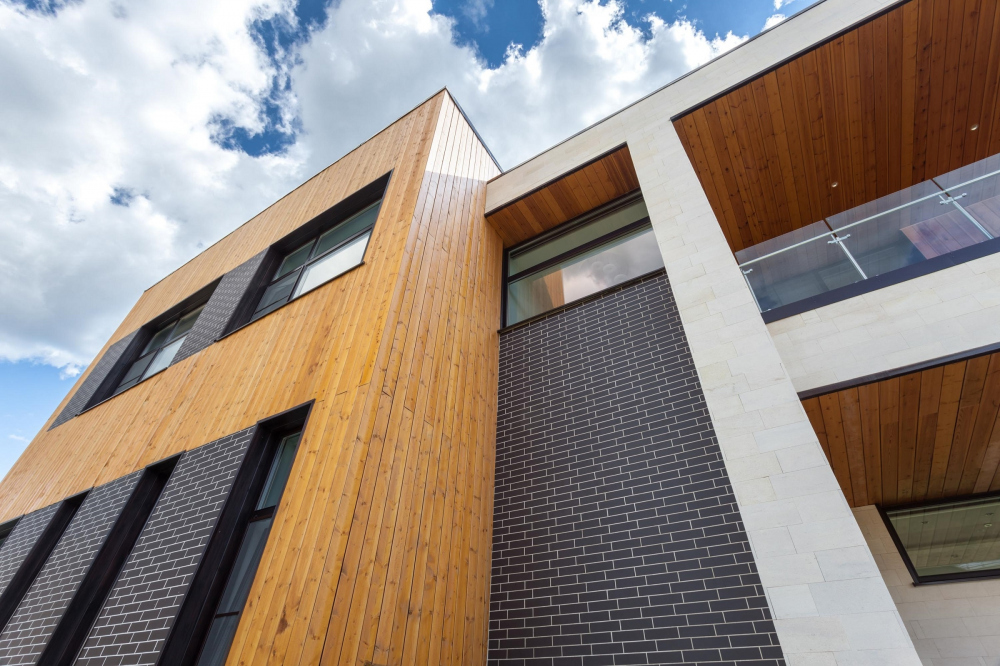 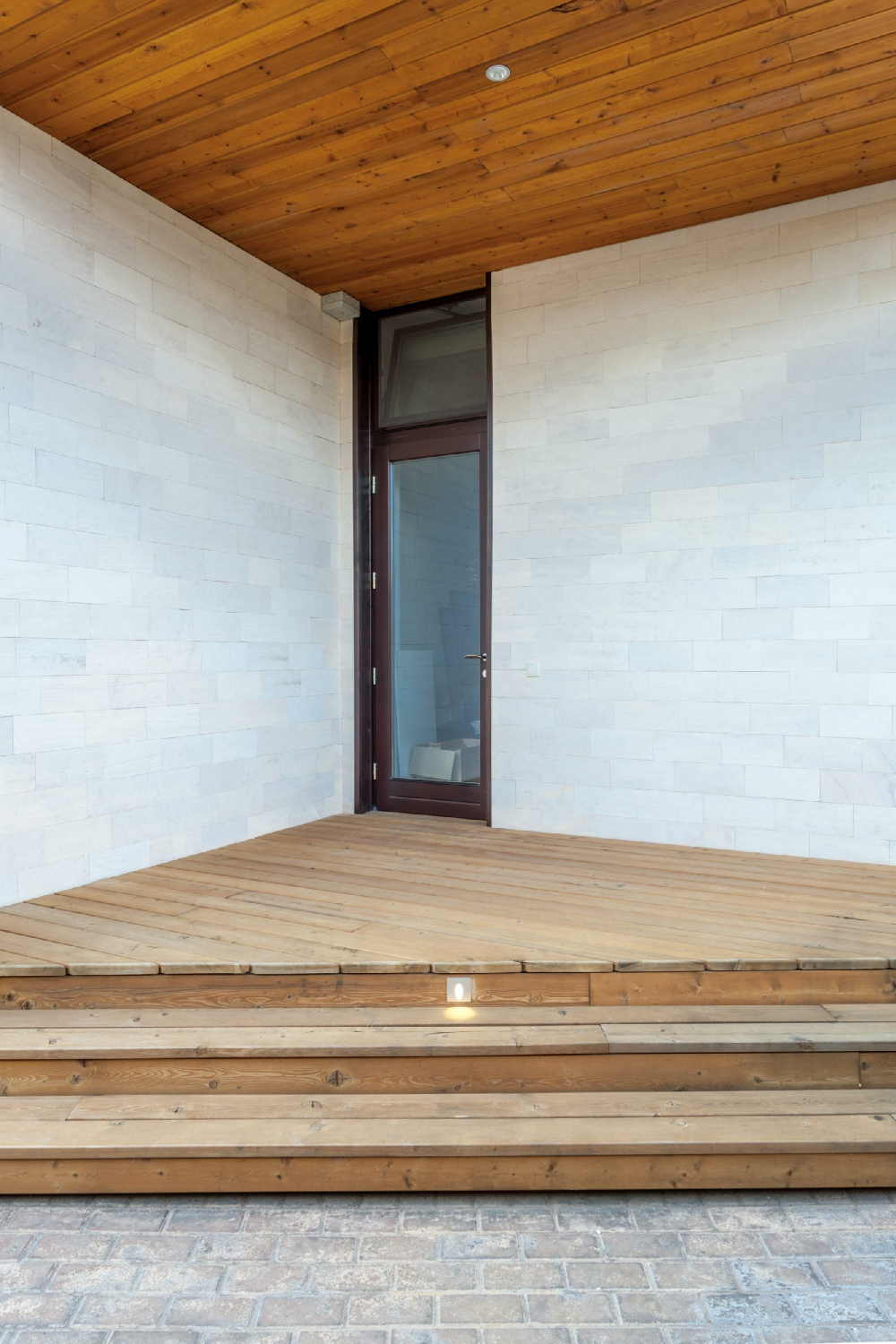 On the second floor, the same avant-garde glass corner belongs to the master’s bedroom. The bedroom is joined on one side by a covered terrace with glass railing that overlooks the grand facade, while on the opposite side the bedroom ends in a capacious stanza. This way, the openness and transparency are maintained even in the private rooms.

The dynamic character is also achieved by placing together different surfaces covered with different decoration materials, which are nonetheless arranged to form a well-balanced composition. The larch wood of warm tones looks as if it was sunlit in any weather. The wood is opposed by the brick texture and white stone that, as was already said, is used to highlight the key constructional and compositional elements. Different in color and depth, the rectangles come together to form a suprematist composition, or maybe even a volumetric counter-relief. There is a different composition on each of the facades. The house becomes a symbol of everything that’s contemporary and open to change.