​Part of the Urban Kaleidoscope

This is how you can best describe the hotel building on the Dubininskaya Street. Its architecture is anything but conspicuous – one could even say that it’s making a parade of its unpretentiousness. Upon closer examination, however, interesting details begin to come up. The building of Holiday Inn Express Hotel opened on Moscow’s Dubininskaya Street in the fall of 2017. The three-star hotel belongs to the budget line of the famous brand, which focuses on offering “limited services at a reasonable price”. This is exactly the kind of hotel that you could open in the depth of one of the parts of the Paveletskaya industrial park, a place that has been reconstructed for years. The hotel is situated on the edge of the former territory of Cold Storage Facility #3, hiding behind the 20-floor tower of the Rosneft office, which literally divided in two the 12-story prefab residential building and a couple of two-story Moscow tenements that miraculously survived here from days past. The surroundings are pretty diverse, and the territory is not yet quite organized, the old warehouses alternating with yawning gaps, obviously waiting to be “developed”. Meanwhile, this place is but a ten minutes’ walk away from the Paveletsky Railway Station, the metro station bearing the same name, and the Garden Ring too, which basically means that if you switch to a trot you will reach all these places in five minutes, which, in turn, means that this location is extremely convenient. 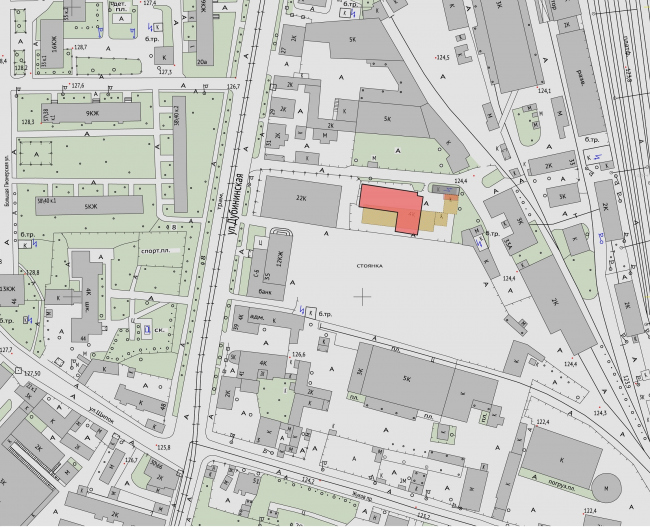 What makes this architectural project different in this specific case and considering the diversity of its surroundings (most of which are still in construction) is its unpretentiousness. Here’s what I mean. Oftentimes, 3D visualizations drawn by the architects show glass-and-concrete giants that look as if they were kind of beautifully “dissolving” in the sky. Later on, however, when these projects are actually built, it turns out that they do not dissolve anywhere – the fact that has long since been noticed by the city preservation activists. Here, on the other hand, what we see is what we get: the hotel building is barely visible, delicately glittering against the sky. It is literally dissolved in the architectural context. At the same time, finding it is not hard at all, even for a fatigued traveler, which is also a considerable competitive advantage for a hotel. As for the passers-by, not interested in bed&breakfast, this building passes completely unnoticed. Completely. This quite a unique case by Moscow standards, this approach is something that most architects only dream about, and here they were able to do it. To do what, exactly? To keep within the limits of urban planning decency in a diverse environment.

To do the project justice, let’s admit that the proximity of the Rosneft office made the architect’ task somewhat easier: its nobly brown volume is the first thing that meets the eye, drawing people’s attention away from everything else. However, the new hotel has also been able to engage in a dialogue with this “person of consequence” – the newcomer not just hid behind its back but stood up as an embryo of a new street. Even more than an embryo – there is indeed a street here, and, if they develop it slightly into the depth, they will get a chunk of fully-fledged urban space. One small step has already been made. The hotel also responds to its neighbor: one of its façades, which comes the closest to the wall of the office building, bears a staircase and common-use balconies, whose presence is dictated by the fire safety rules but, on the other hand, one can use them to have a smoke up there. 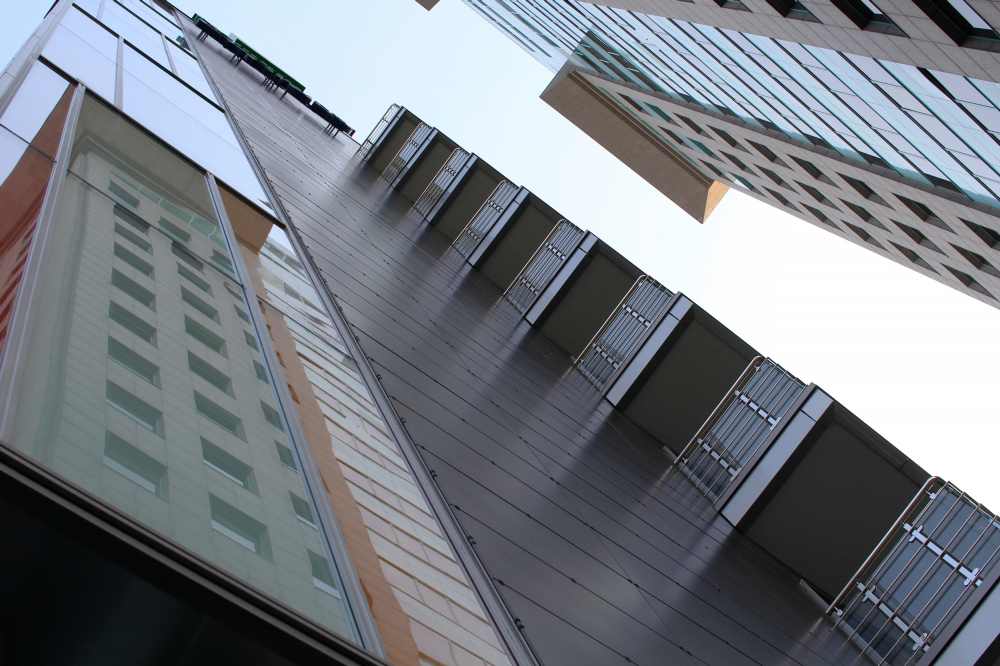 Incidentally, there are two staircases here, the other one situated in the poorly lit corner of the L-shaped building and combined with the elevator block; yet another freight elevator runs on the outer corner – it is convenient for loading and unloading the material needs of the hotel.

The main floors of the hotel are standard, three meters high. The bottom floor of the lobby is quite tall – 5 meters high. Beneath it, there are two tiers that are just as high, one semi-underground, intended for commercial use, and the other meant to be an underground parking garage (hopefully, equipped with an elevator). The underground floors continue eastward, into the depth of the land site, forming a paved yard/podium. It was planned to light the entire top floor with rooflights (this solution doesn’t seem to have been implemented? I’m seeing the paved section buy I’m not seeing any rooflights. The reason for such a decision? Building up was prohibited here?) 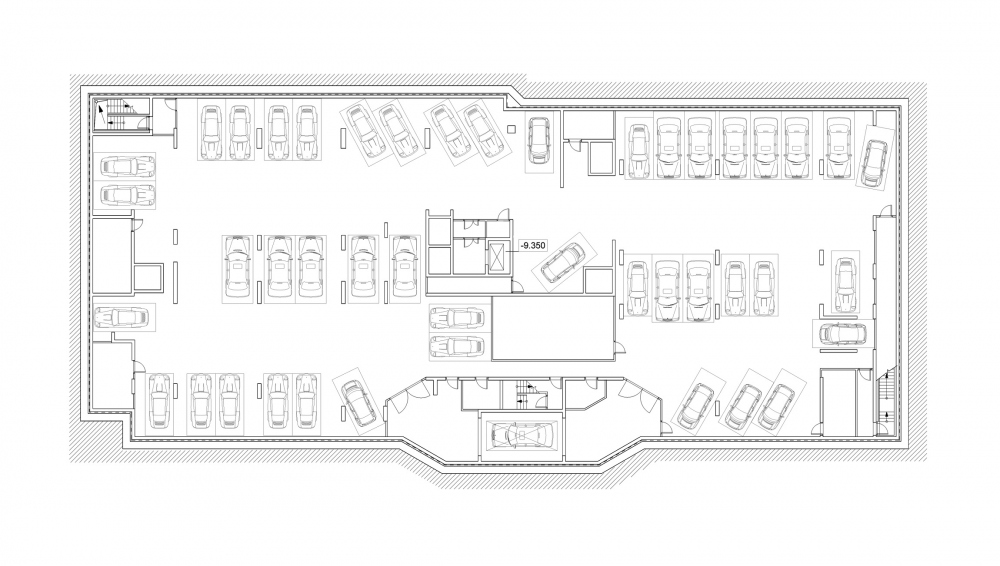 One of the most interesting solutions of the project is the semi-underground floor. The ambient light gets here through a deep areaway on the street side. One can get down by the two-flight staircase running parallel to the façade (19 stairs), and the metallic semi-columns of the first floor also continue here: the space before the main façade also takes on an intrigue and a volumetric character. It is livened up by the naive graffiti on the wall and life-affirming quotes on the stairs; you can have a different attitude towards such “adornment” but in any case such things are a sure sign that the city life is already going on here. 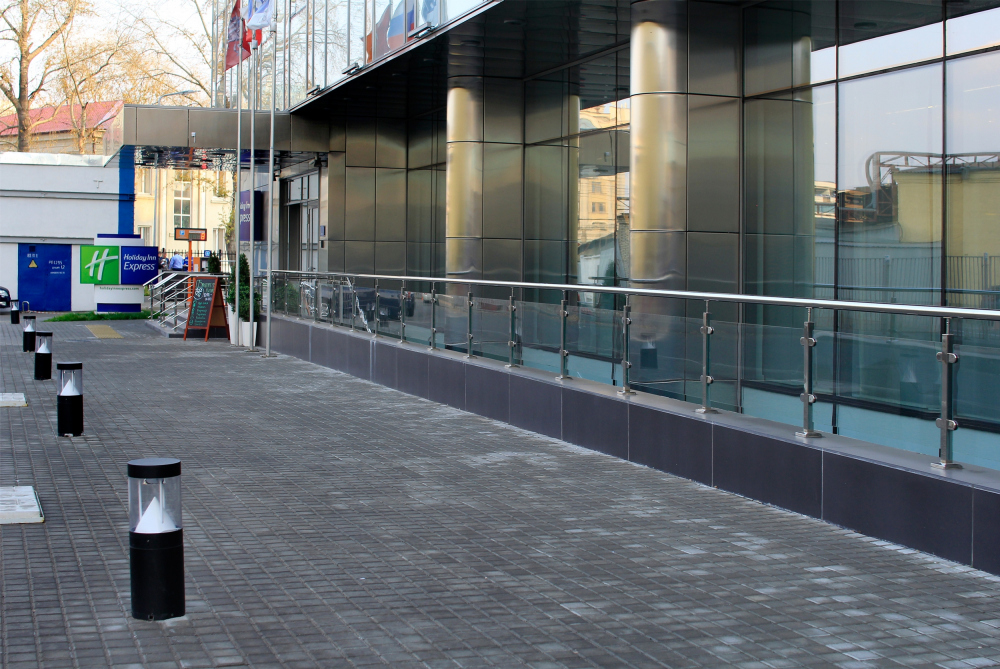 On the flat glass façade, the windows are surrounded by panels of autumn colors: the light tone of faded skies, orange, terra-cotta, and dark-gray stripes. The façade uses the mosaic screen technique that was introduced in Moscow fifteen years ago by the Ostozhenka Architects, a very convenient way to turn a flat façade – given the fact that you do not have the budget to show the depth of the window jambs – into a glittering pattern that reacts to the surroundings, at the same time having a color and a character of its own. But then again, here the composition is simpler because it is defined by the tasks and the modern trends of pristine façade grids. The colored bands unite the floors in pairs, their width and colors alternating. In addition, in a couple of floors the windows are shifted by one iteration, and, if you look a little harder, it will seem as if the façade is slightly turning left and right. The surface is also livened up by the operable transoms of the hotel windows that look like the keys of some sci-fi musical instrument pressed in a random order. One of the tasks of this composition of transparent spots on the façade – to cover up the square proportions of the windows and the large width between them – has been fulfilled: one will have to look real hard to tell between the windows and the walls – everything bleeds into crosses of lines and soft spots of color. This building is anything but a bold architectural statement, making which was neither in the budget nor in the intended class of this hotel anyway. At the same time, it definitely has some reserved and decent modesty about it, which is important because making a bold statement is something that pretty much everyone wants to do, while making a sober evaluation of one’s task and designing a building that would make the right background is not the most rewarding job in the world but it needs to be done, and it needs to be done a lot. At the same time, standing next to this building, we feel as if we find ourselves in a developed and thoroughly thought out urban space. One feels like dismantling the black fence before the Rosneft office – then a real street will appear here, people will no longer have to cling to the wall, or, what’s worse, step down on the traffic lanes. One should think that sooner or later this is bound to happen and a small embryo of urban space that appeared here thanks to the efforts of Aleksey Ginzburg Architects, will grow and develop. Because this is the way it was meant to be.
Text by: Aleksey Ginzburg, Julia Tarabarina
Translated by Anton Mizonov