In this issue, we are talking to the author of the 1992-1995 reconstruction of the building, try to find out what specifically was reconstructed, and publish the drafts that prove that the historical nucleus of the house was preserved both inside and outside. 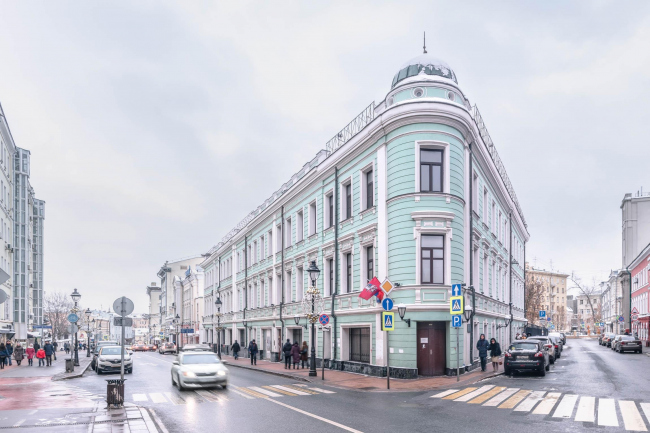 The possibility of demolition of the so-called “Buloshnikov Tenement House” at Bolshaya Nikitskaya, 17, building 1, coupled with the possibility of building on that spot a housing project up to nine stories high, became one of the loudest Moscow scandals of the beginning of this year. At the same time, a question arose: is this house, so ardently defended by local preservation activists, truly authentic? Or was it simply rebuilt from scratch in the 1990’s? We met with the author of the reconstruction project, Pavel Andreev, and Interviewed him about the project. A spoiler: the house was preserved in its original condition, even though it got additions from the yard side. So, in short, yes, it is authentic. 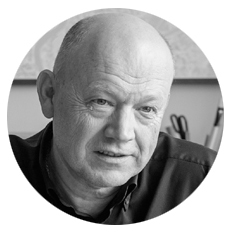 In 1995, when you worked on reconstructing House 17, Building 1 on the Bolshaya Nikitskaya Street, what was essentially this project about? Was it restoration, reconstruction, or was the building completely torn down and then rebuilt from scratch?

The house was kept fully intact, the bearing structures and the façade decor alike. We conducted a long-term research of the building – as far as I can remember, we started working with it in 1992. The house was severely damaged, there were leaks all over the place, it was infected with fungus, the basement was terribly damp, probably, because of breakdowns of the utility lines. We deepened the basement by about a meter, then we reinforced it, and cured the walls from the fungus. Concurrently to that, they were building a collector on Bolshaya Nikitskaya, and the underground work turned out to be rather challenging, first of all because of the decision to keep the bearing structures. There was a rather lengthy period of making the wall injections, penetrating and so on. The walls of all the three floors, both the outside bearing walls and the inside ones, and the whole volume remained original, which is clearly visible on the plans of the working documents stage.

Measurements before the reconstruction: Measurements before the reconstruction. The basement and the 1st floor. House at Bolshaya Nikitskaya, 17, Bld. 1. ABV Architects, Pavel Andreev 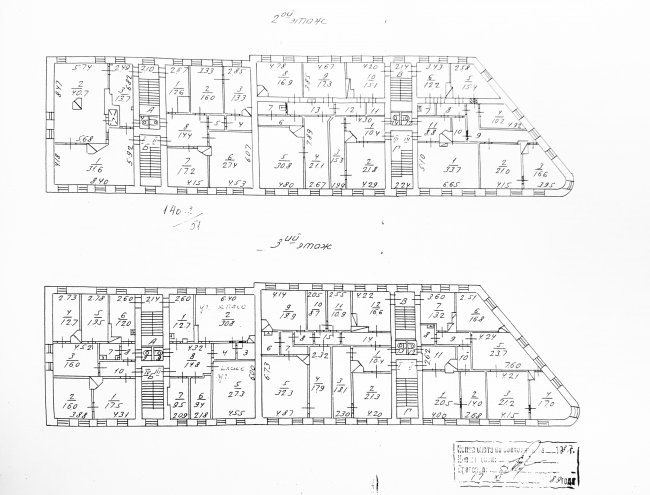 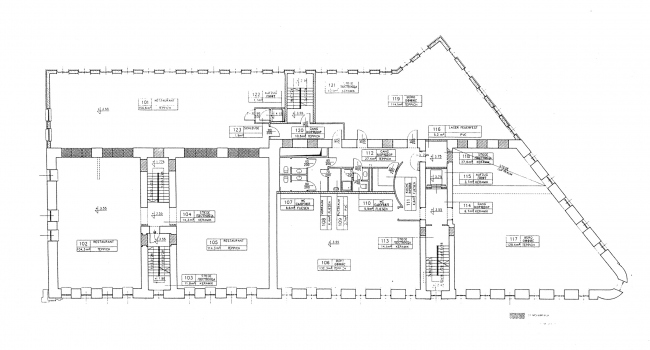 There are six vaulted cells in the basement...

We cleared the vaults and sandblasted the bricks they were made of. After we lowered the basement floor, the height of the inner space became about 2.5 meters. For a while, that place hosted a beer restaurant – one of the investors was Austrian, which determined its specialty. Our client bought somewhere a lot of photographs of old Moscow, posted them on the walls, and it created a really nice atmosphere. What additions did you make in the course of reconstruction?

There were three versions of the schematic design, one of them including an elongated annex stretching into the depth of the Maly Kislovsky Side-street. What we ultimately chose was the version with a longitudinal annex, which made the volume of the building thicker but at the same time allowed us to raise the height of the crest of the roof without having to change its tilt angle. We placed the ventilation system in there, completely hiding it under the roof. The attic is unheated; the air induction is performed through the latticed gable windows. It never ceases to amaze me that today a lot of architects design their mechanical floors as boxes, while you can just easily hide them the way that we did.

On the street side, the cornice runs above a small attic ledge, on the yard side it is raised a little higher, and in the middle part, underneath the attic, the building got a rather spacious attic floor. Who proposed the idea of adding a dome on the corner?

I did. There was a rounded corner without a door, we made an entrance in the corner, behind which the bank lobby is situated. This entrance door needed an accent, and the dome became such an accent. I must say that it only popped up in the final versions – originally, we had no such idea. 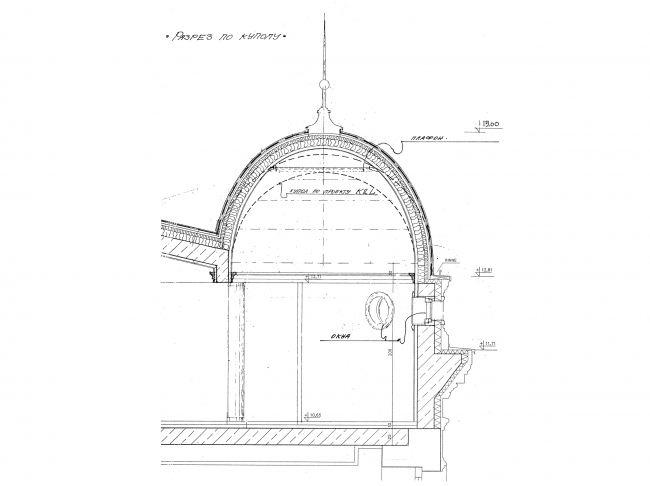 How authentic is the façade decor?

For the most part, it’s truly original – we measured all the details and filled in the missing links – mind, with stucco, not with polystyrene foam. I think that our work with the façade can be arguably classified as restoration, which was appropriately recorded at the time. As far as the color of the façades was concerned, we selected it by the building’s current name – Green House – and it must be said that it was slightly mismatched with the concept that was at the time being developed for Moscow.

The decision to preserve the house with all of its bearing walls as a valuable part of the city environment was collectively made by the experts of the Heritage Site Protection Department, headed at the time by Vladimir Sokolovsky. The discussion also included such prominent experts as Victor Sheredega, Aleksey Kurennoy, and Vladimir Chernyshenko. Back then, it was all decided on the level of the people who really cared for the preservation of the historical heritage: in the course of the discussion, the preservation principles were defined that later on formed the basis for the technical specifications and still later on, having taken the shape of a project, were considered by the council of the Heritage Site Protection Department, after which they took the form of official approvals.

Here is the thing – when professional and competent people consider this or that matter, they can see beyond classified, specifically, see a house that formally does not have a protected status and define the principles of working with it, decide how far you can go with changing things. Back in those days, there were fewer architectural heritage buildings – today we have about four thousands of them.

If you ask me what is more important, the monument of architecture or the environment I will answer without hesitation that the environment is more important. Just imagine – you tear down the entire city altogether, leaving just a few monuments of architecture – and you’ll lose the city forever, even though you will still have a few madly beautiful things left. There is one such a city out there, by the way, it is Samarkand – it does have a few heritage sites in it, but the city as such is nonexistent. Bukhara and Khiva, on the other hand, do have environments of their own. And if you lose the Moscow environment, your individual monuments of architecture will look pretty much like the inkstand on the green cloth, like something that you can place virtually anywhere.

You can move your monument over to any place but if you leave it devoid of its environment, its value – for me, at least – will be 99% lost. The atmosphere will just go. The projects that we worked with for twenty years formed something that we know as Moscow – environment, context, call it what you like. Because individual buildings – even if there are masterpieces among them – will not make a city.

Who was the commissioner of the reconstruction project in 1992-1995?

It was Valery Baranov, the C.E.O of the Greenhouse company that owned a grocery store in that house. We did the reconstruction project bearing in mind a supermarket, a cafeteria, and a restaurant; there was a rather large shopping hall – the showcases situated closer to the center were occupied by the store. Hence the name of “Green House”. Later on, the bank, which was on the corner, ousted the store.

I must say that another important aspect is preserving not just the building but its habitual function as well – something that turned it into a landmark within the city context. The grocery store was rather popular in Moscow, and now it’s gone. In the end of the Gertsena Street, there was a popular “FISH” store – and now this place is going to be occupied by the Bulgari Hotel. There was just as popular candy store on Nikitskie Vorota, and now its place is occupied by a Villroy&Boch store… Of course, there are things in this city that you need to change from time to time but just think for a moment: if you leave the Madeleine Square devoid of the Fauchon restaurant – Paris is not going to be the same.

Do you think this house can still be turned into a residential one?

As a matter of fact, it was built as a residential one – remember, it was a tenement house. At first it was two stories high, then, in the beginning of the XIX century a third story was built up. Of course, it can be readjusted to fit the housing function – but we are now speaking about preserving the building’s appearance in order to ultimately preserve the city’s environment, not about restoring the function. Perhaps, we could build up a story or two, stepping back a little from the front side... No more than that.