The authors of the first building of the Medical Cluster that opened in September 2018 in Skolkovo research center, Asadov Bureau and the company Transumed, came up with unconventional solutions for the healthcare facilities, proposing a new typology of architecture of health.

What can and must the architecture of healthcare facilities look like in the XXI century? In this country, this topic still does not get the attention that it deserves, most of the arising challenges still being answered by using purely decorative techniques. However, the situation is taking a turn for the better, and not least thanks to the effort of Asadov Bureau that got in 2011 “Crystal Daedalus” prize for its project of the Center for Pediatric Hematology, and was shortlisted this year by WAF for its project of the first building of the International Medical Cluster in Skolkovo research center, in whose project the architects set for themselves a task of defeating the stereotype and implement the idea of architecture that heals.

Within the framework of International Medical Cluster program there were significant portions of land allotted for the construction of medical facilities in zones D1 and D4 with a total area of 57 hectares, upon which it is planned to build no fewer than 15 hospitals and clinics specializing in oncology, cardiology, orthopedics, traumatic surgery, and neurology, designed to admit up to 300 thousand patients a year, as well as research and education centers and apartments for the patients and doctors. The historical building of the City Clinic #1 named after Nikolai Pirogov, Photo courtesy by Asadov Bureau The building of “N. N. Blokhin National Medical Research Centre of oncology” of the Health Ministry of Russia on the Kashirskoe Highway. Photo courtesy by Asadov Bureau

The master plan of District D1 had to be revised with consideration to the requirements that are generally set for healthcare facilities and the related infrastructure. This task was promptly done by a project team consisting of Transumed and Asadov Bureau who landed the contract for designing the first facility of the International Medical Cluster program – the diagnostic clinic and, at the same time, the presentation center of the future cluster. The consultant for correcting the master plan was the Boston Consulting Group (BCG), which also curated the development of the International Medical Cluster program.

The project team paid most of its attention to the first stage of the cluster construction located at an important town-planning point – not far away from Checkpoint 3, one of the main driving entrances to the grounds of “Skolkovo” research center. A block of three buildings – a compact diagnostic unit, a therapeutic unit with a z-shaped floor plan, and an interdisciplinary unit that looks like an asymmetric catamaran – occupies an almost perfect square 2.82 hectare land site. The first two units are connected by a common entrance zone with an atrium, the third one standing slightly farther away from them, on the farther boundary of the land site. 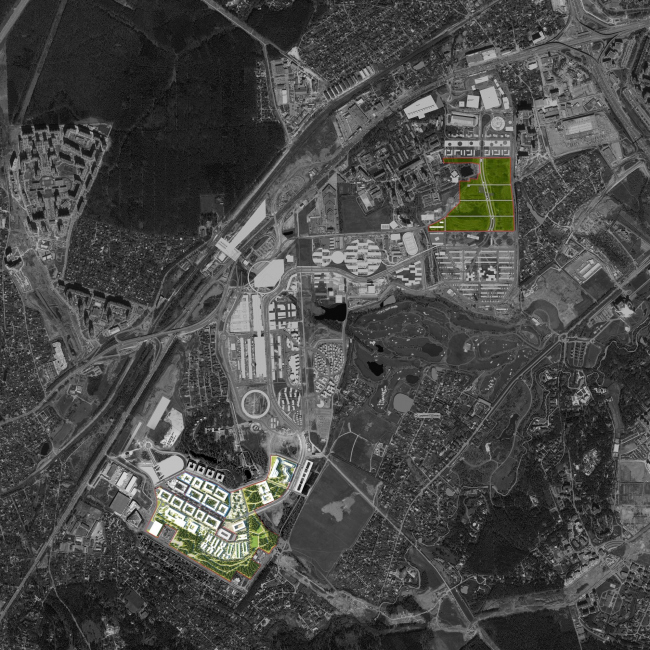 International Medical Cluster in Skolkovo. The master plan with the indication of territories rented by the Government of Moscow for placing the IMC projects. Image courtesy by Asadov Bureau International Medical Cluster in Skolkovo. The location of the block of the first stage on the Skolkovo master plan. Image courtesy by Asadov Bureau Initially, it was planned that the first and the second units would be built simultaneously but the government of Moscow only allotted funds for the first one, for which in 2016 a co-investor was chosen, as well as the operator – the famous Jerusalem hospital Hadassah, which invested about $40 million into supplying the equipment, organizing educational activities, and covering the operative costs. Therefore, the architects had to provide for a temporary “stopper” in the part of the atrium which is to join the second unit later on.

The pilot project of the International Medical Cluster was to be designed and built in a record-breaking time. Meeting all the rigorous deadlines and requirements of the global operator was a task that could only be handled by a well-coordinated team, which presented itself in the form of a tandem of Transumed GmbH Medizintechnik and Asadov Bureau. The principles of working and the distribution of functions are explained by Irina Aleksandrova, the manager of Transumed GmbH Medizintechnik (Germany): “Our company offers the entire range of services in design, construction and supplying medical equipment to modern clinics. Together with Asadov architectural bureau, we developed a project of diagnostic clinic for the International Medical Cluster foundation and the international operator “Hadassah” (Israel). Transumed was responsible for the overall management and coordination of work of Russian and foreign members, architectural, engineering and technological solutions meeting the standards of Skolkovo Research Center, as well as for the working documents and the interior design of the medical facilities, while the team of Andrey Asadov was responsible for adjusting the master plan, the volumetric and façade design solutions, and: the interior design of the atrium and the foyer of the conference hall”. International Medical Cluster in Skolkovo. Visualization of the unit of the first stage. © Asadov Bureau International Medical Cluster in Skolkovo. The unit of the first stage. © Asadov Bureau

According to the brief, the first diagnostic unit was to include five groups of premises. The first was a multifunctional space at the entrance that included a reception, a waiting lounge, a café, and a winter garden. The second was the diagnostic center “check-up” with the doctors’ rooms and an in-patient facility, which occupied three floors right of the atrium. Left of the atrium, there are offices and a conference zone on the third floor, with a separate lobby and a conference hall. Above the diagnostic block, on the fourth floor, there is an education and training facility with classrooms equipped with everything that is necessary for educating doctors and nurses, including distant training. The last group is mechanical and maintenance rooms, which are grouped in the basement and in some of the first floor where they do not get in the way of distributing the visitor flows. Thanks to the clear zoning, the architects were able to arrange all the units in a compact way, without exceeding the 15-meter height limits (4 floors) set by the Skolkovo design code.

According to Andrey Asadov, “the key task for us as architects was to try and create the image of a clinic of the future that is not at all ominous or oppressive but is a healer itself. It must by default put you into a positive mood, lower the level of stress caused by fear and pain and speed up the recovery process. Everything must work toward that end: the light, the air, the presence of natural environment, the lightness, the atmosphere and so on – everything that will increase the attractiveness of the future center, and, therefore, will foster the preventive care about the health of its visitors. Developing the architectural and interior design solutions, we tried to observe the following five key principles – innovative image, energy efficiency and sustainability of the engineering solutions, multifunctional and comfortable. And we did not even expect that our efforts would bring about such a strong positive effect”. 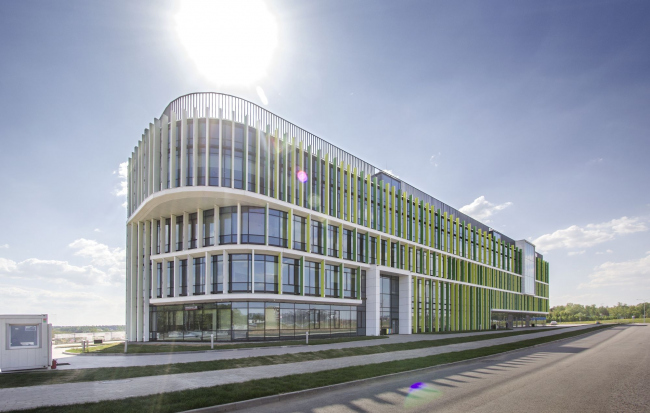 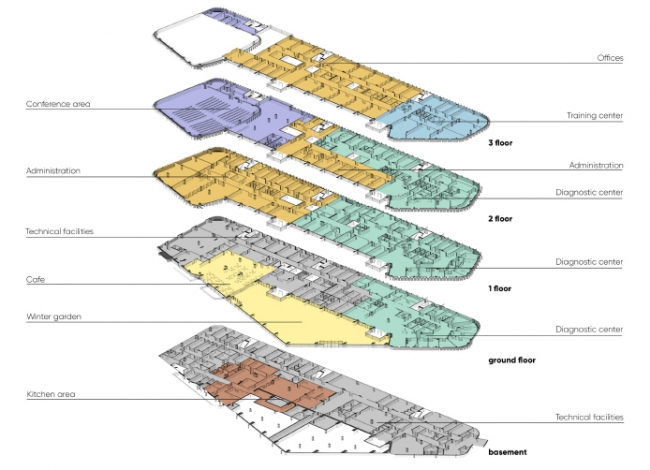 The façades are essentially a lightweight system of stained glass windows with energy saving glass with high heat insulating performance. On the outside, the stained glass windows are partially covered by a structure of vertical metallic lamellae installed at an angle to the façade surface, following its numerous curves. From the side of the building, all the lamellae are painted white, and on the outside – one of the two shades of green selected with a consideration for the visitors’ visual comfort. Thanks to this double-sided painting idea, the building, when viewed from different angles, creates a “chameleon” effect on its façade.

The frequency of the lamellae is varying, which makes it resemble the rhythm of a cardiogram. The lamellae stand the most densely on the north façade, while the south façade, in the center of which the main entrance to the clinic is situated, leading to the multi-height atrium, is left one hundred percent glass in order to let in more sunlight.
The horizontal belts and the vertical green-and-white lamellae form a volumetric structure that makes the laconic volume of the clinic look more dramatic thanks to the rounded corners that slightly resemble modern high-tech gadgets. Capitalizing on this idea, Asadov Bureau, generally known for its adherence to daring volumetric shapes, could not resist the temptation of pulling a striking constructive stunt – a five-meter-long cantilevered structure with a rounded corner on the last floor that accentuate the key view of the building that opens up from the highway.

The spacious atrium – more like a covered square – is used as a reception area of the diagnostic clinic, a lobby of the conference hall, an exhibition space, as well as a venue for public events. The functional and planning freedom is provided by bearing concrete pylons placed along the perimeter of the hall that take the load of the translucent roof. Originally, the architects and designers wanted to cover the atrium with a system of several skylights or use pneumatic shock absorbers but the example of Zaryadye Park with its “gridshell” prompted a better solution. The authors got in touch with the manufacturer of that structure, the Russian company “Supporting Systems” and were pleased to find out that the space frame system was lighter and cost approximately the same as the traditional joist ceiling. The shell was calculated on a computer with the use of the principles of parametric design and with consideration for the construction regulations referring to slope angles; in this specific instance, the elevation of the shell anointed to mere three meters.

The sustainability was achieved through active use of natural decoration materials, as well as planing greenery in the atrium space. The architects, together with the experts from SK “Atrium” and the landscaping designer Igor Safiullin treated it as an intermediate zone between time outside and the inside space. The landscaping elements got a continuation inside the atrium, the only boundary between them being the stained glass window. The trees planted next to the building echo the huge trees in tubs inside of it. In September, the clinic opened and started functioning as a diagnostic and educational center. Parallel to that, they launched the design of the second stage and are completing the procedure for choosing the operator of the third unit. In both cases, the project development will be done by other teams that have an experience of working with western clinics; but then again, all of the ensuing solutions will be one way or another based on the preset standard – the new standard for medical facilities with quite a different atmosphere and architecture that answers the trends of today, as well as the new principles of working with the visitors.