The concept of reconstructing the former dye-house of the Tsindel factory into laboratories of “Mosavtosteklo” plant preserves and at the same time refreshes the building of the early XX century with a very interesting solution for the silhouette of its top floor. 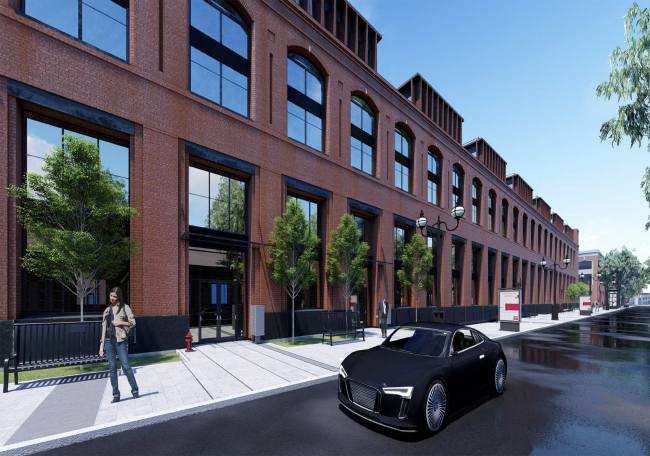 The plant is located on the Derbenevskaya Street next to the “Business District Novoapassky”, a former cotton-printing factory that was turned into a Class-B business center in the mid-2000’s. The handsome-looking architectural ensemble of red-brick industrial architecture was built in the early XX century upon the project by Traugot Bardt for Emil Tsindel cotton mill. In 1924, the territory of the Tsindel factory was not just handed over to the Soviet cotton-printing mill but it was in fact divided in two: specifically, the large building of the dye shop on the Derbenevskaya Street was assigned to the newly-created plant “Mosavtosteklo”. Today, the plant is doing very well – it makes glass of all possible kinds, including architectural, tempered, glass with electric heating, glass with silk printing, and glass with inbuilt diodes. Pavel Andreev has long since been familiar with this material; among other things, Mosavtosteklo manufactured the colorful stained glass windows designed by Elena Markovskaya for the ceiling of the famous “Children’s Paradise” toy supermarket. Currently, the production facilities have been moved to the town of Dolgoprudny near Moscow, while the building on Derbenevskaya will host the R&D laboratories – which brought about the need for reconstruction.

The long five-story brick building with large windows stretches along the quiet two-lane Derbenevskaya Street. Its business-like laconic architecture shows interesting details that connect the building to the beginning of the XX century, the time when “neo” came to replace “pseudo”. Particularly good are the squatting semi-columns sunken halfway into the wall and the cylinder-shaped contours of the windows that unite the third and fourth tiers (which goes to show that the technique of changing the façade proportions by joining two floors into with window apertures has been around for at least a century). Inside, one can spot the characteristic cast iron column caps. Still, however, the façade looks rather sloppy, the yard being overbuilt with barn-like makeshift affairs, including ones made from silicate bricks. The project is subjected to the city development plan for land that stipulates keeping the parameters of the building, its height, construction blueprint, and the useful floor space. Therefore, the architect’s art in this specific case consisted in keeping “everything the building needed and nothing it didn’t” (even though the dye-house as such did not have a protected status) and finding a few ways to make up for the useful floor space of the yard structures subject to dismantling. This meant working in very reduced circumstances and making high-precision maneuvers.

The architects proposed to clear out the shallow basement of the building, organizing there a one-tier parking garage with symmetric ramps from the side of the yard, adding a small eco parking with grass paver in the yard, between two small buildings that avoided the fate of being dismantled. The architects were also able to find some space for landscaping work: pavement, trees, and circular benches around them. 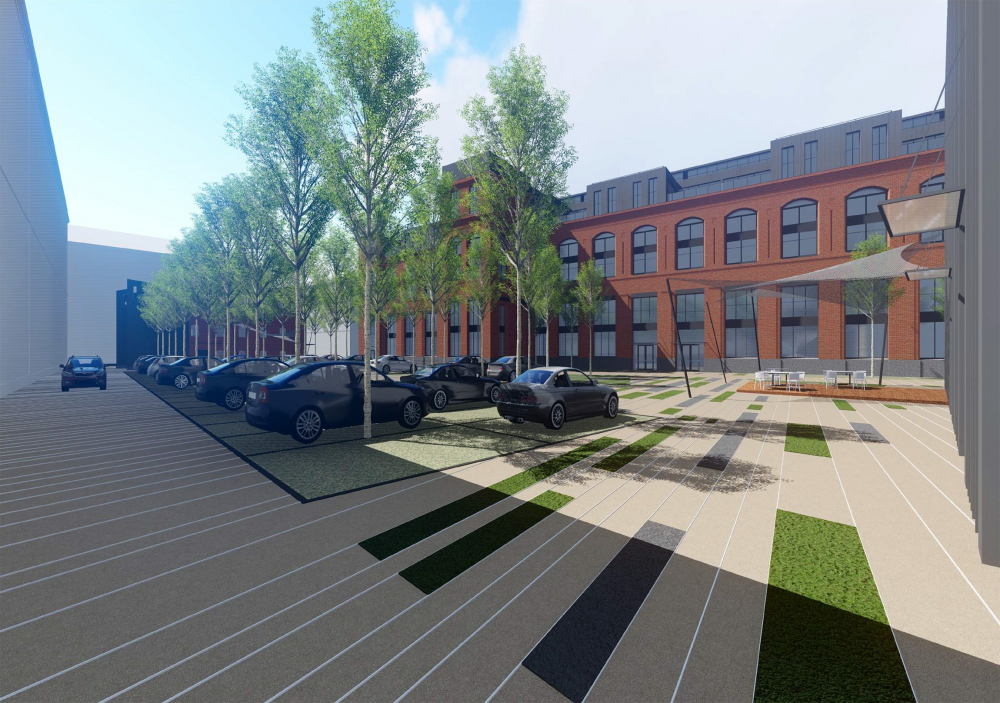 Half of the first floor is occupied by public functions – there will be a café here, some of the space adjoining the street-side façade being double-height, that is, partially encroaching on the second floor. Also, here, before the street, the architects have designed an areaway with staircases on both sides: inside of it, taking some of the area away from the parking, shops can be hosted. On either side of the café on the first floor, there can be the R&D laboratories and showrooms of the newly manufactured product – among other things, the plant manufacturers and sells insulated glass units. If necessary, these premises will be accessed directly from the street. Higher up, there will be the plant’s research and development facilities, and, luckily, the structure of the factory building with two rows of cast iron columns allows for both open-space and partitioned configurations.

The most interesting solution was applied to the upper tier, which is quite common for reconstruction projects of industrial facilities. After the attic was cleared it yielded enough floor space for one and a half floors – as a matter of fact, it was this specific part of the building that compensated for the floor space of the dismantled yard structures. However, since the architects could not get more square meters than was stipulated in the city development plan for land, the top floor got a curious-looking embattled structure: the ribbed ledges of the mansards alternate with terraces that the office workers will be able to step on, enjoying the scenery. This ostentatiously modern buildup is, on the one hand, obviously modern, and, on the other hand, it continues the building in a rather logic and tactful way. Two colors are there to choose from: brown of oxidized corten steel or dark-gray titanium zinc, and, according to Pavel Andreev, he is more inclined to choose the second contrastive option: “the necessity to “subtract” from the useful floor space dictated a very interesting solution” – the architect says. The striped vertical rhythm of the buildups is continued in the façades of the fully renewed minor buildings and forms the second theme of this small (by Moscow standards) architectural complex. The first fiddle here is, of course, played by the renovated building: the brick will be cleared and coated with water repellent, and the now-white lintels will be painted black. Basically, the reconstruction concept fits in perfectly with the trend of the recent ten or more years, even though it has two “personal” features: first of all, the plant is not moving anywhere, vacating room for offices or housing stock, but stays in the same place, even if represented not by its production facilities but by its R&D laboratories – keeping this way the functional diversity of the city. Second, the proposed buildups demonstrate all the features of architecture of recent years: they do not sharpen the contrast and strengthen the classic “verticality”, yet at the same time look fresh and new, making no secret of their origin. The ensemble turned out to be easily read, clear, yet it still like a single whole. It’s even curious that this ingenious solution is essentially a result of the architects responding to the numerous limitations that they were to address in their project.
Text by: Julia Tarabarina, Pavel Andreev
Translated by Anton Mizonov