The team of “People’s Architect” has developed a project of restoring the Manège in the town of Zvenigorod. The building will recover its historical form; then it will host the Zvenigorod museum of history and architecture, enriched with the functions of a cultural and community center. 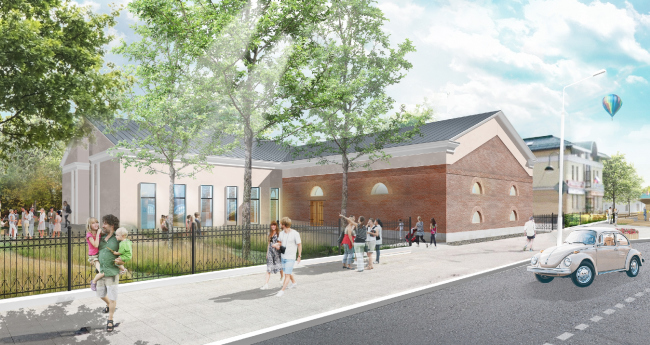 The project of restoring the Zvenigorod Manège. View from the Moskovskaya Street (project proposal) © People's Architect

Barring the famous local monuments of the Russian architecture of the Middle Ages – the Gorodok Cathedral and the Savvin Monastery – the building in question is the oldest in the modern Zvenigorod – meaning in its part which today is commonly regarded as “the town” – with a boulevard and a few cafés and shops. The building which is today is known as “Manège” was built in the 1830’s, originally as a wine house. Back in those days, it was the farthest border of the city beyond which only the cemetery spread out. In the XIX century, the wine house would stand empty for some time, and then in the early XX century the building was reformed into a manège, the semicircular Empire-style windows being replaced by large rectangular ones. Still later on, the building hosted a theater, and in the 1920’s, they started to play movies here. Another half a century later, the building got a second hall added to it, together with a large foyer in its western part, thanks to which the originally rectangular plan or the building became T-shaped; the Manège also got extra windows, its roof was raised and painted the “salmon” color, and a white stripe was added along the perimeter.

The project of restoring the Zvenigorod Manège. View from the Moskovskaya Street (current situation) © People's Architect

Since then, the building has been looking like a provincial “community center”, which it essentially was in the last days of its active life in the 1990’s. Behind the patina of the local Empire-style façade, one can hardly ever see a monument of architecture of the XIX century, and, one of a rare typology for the Moscow region, too – not a tenement house but a utilitarian building. 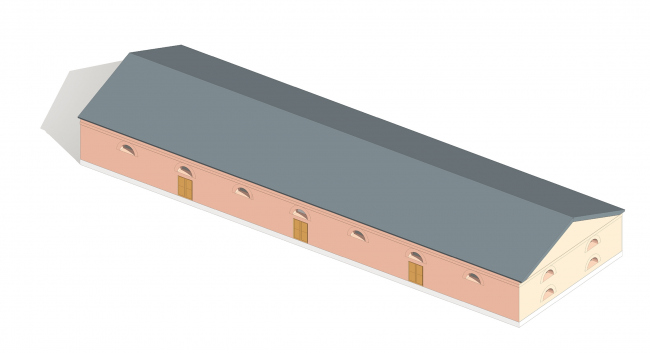 The project of restoring the Zvenigorod Manège. The 1830's. Graphic reconstruction © People's Architect

Today, the Manège is essentially situated in the very center of the city. The Moskovskaya Street, on which it stands, although spoiled a little by the soviet-time inclusions and imitation new-construction buildings or the 1990’s, is still convenient for pedestrians, has shops and cafes on it, and one can still feel here the atmosphere of a charming provincial town. Even the housing complex “Tsentralny” (“Central”), which is located nearby, was built under the local five-story limit. For the last fifteen years, however, the Manège stood derelict, outlaw parking lots and piles of junk appearing next to it. In 2016, the building ultimately got a protected status and was handed over to the Zvenigorod Museum of History and Architecture, which subsequently ordered the restoration project. Currently, the museum shares the exhibition space with the Savvin-Storozhevsky Monastery, organizing temporary exhibition in the “tsar’s chambers”; after its restoration and readjustment, the Manège will get a full-fledged exhibition space.

The team of “People’s Architect” was attracted by two tasks: to reveal the laconic beauty of this architectural monument and to breathe new life into it. The necessity to curb one’s creative impulses, strictly following the historical origin, also proved to be a serious challenge. “Our task was to go against our hearts and put our architectural ambition aside, enhancing the beauty of the old building with only a few strokes” – says the chief architect of the project Aleksey Kurkov. The original idea to make a radical makeover of the soviet part – the foyer – and turn it into a contrastive modern volume was something that the architects ultimately refrained from, and not only because of the fact that once the building got a protected status, the only thing you could do to it was restoration work. The architects came to a conclusion that keeping the authentic “chronology” of the building would be the best possible decision. 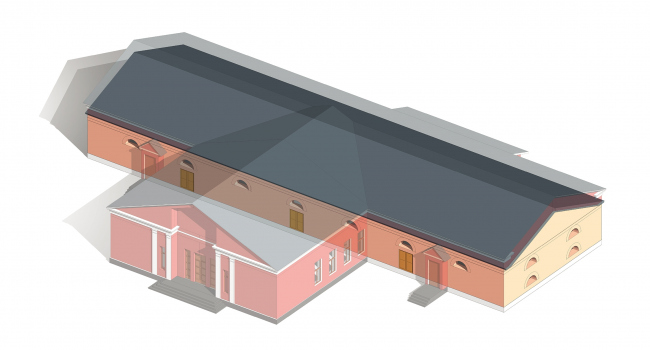 The project of restoring the Zvenigorod Manège. The 1830's. Graphic reconstruction © People's Architect

As for the monument of architecture as such, it is essentially a simple rectangular volume, devoid of any decor, for the exception of the brick cornice belt. Even the Empire-style windows are, according to the architects, practical enough, meaning, are quite self-sufficient construction-wise because their arches “support themselves”. The laconic rationalism of the old wine houses was something that the architects turned into the very essence of this project, as if “rewinding” the history of the building: they proposed to clear the brickwork of the stucco, stop the later-made rectangular windows, and then uncover and recreate the original arched ones. The architects are also removing the emergency exits of the movie theater – small tambours that spoil the original scale of the building. The facades become symmetrical again. 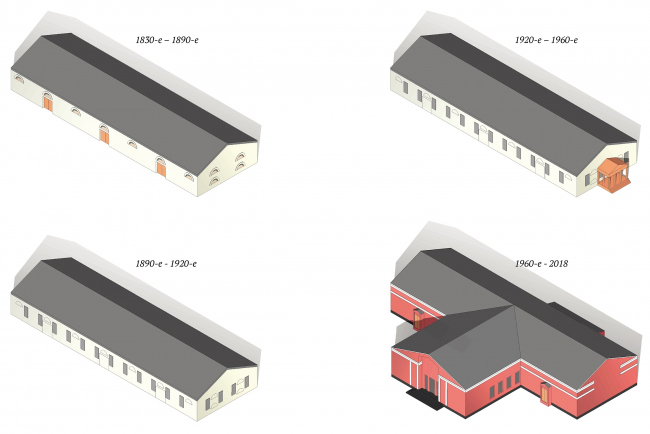 The project of restoring the Zvenigorod Manège © People's Architect

According to the architects’ plan, all that remains of the XX century – the foyer and the annex on the opposite side of the building, as well as a meter-and-a-half belt under the roof – is going to be covered with light-colored stucco. The foyer windows will be widened down to the floor, and new ones will also be added – in order to make this part look brighter and more welcoming. This part of the building will contain the main entrance zone, the bathrooms, and the cloakroom.

The project of restoring the Zvenigorod Manège. Facade along the Moskovskaya Street © People's Architect

In the “yard” part of the building, the architects are keeping intact yet another structure of a smaller size. It appeared simultaneously with the foyer in the 1960’s. This is rather a forced step that the architects had to make in order to get extra square meters: this will be the museum management office. The main volume is linked to this structure by a gate through which the exhibits will come and go. The gate will also function as an emergency exit.

The project of restoring the Zvenigorod Manège. Facade along the Nekrasova Street © People's Architect

On the inside of the historical building, the planning remains unchanged: the minor and major plexes of the movie theater turn into exhibition halls; exhibits are also going to be displayed in the space between them.

The 350-square-meter major hall will be a multifunctional facility with a flat floor. It can accommodate for any kind of exposition; the modular panels can even form a labyrinth or divide the hall on two, should such need arise, depending on the character of exposition.

The minor hall has a scenario that is slightly more complex. According to Aleksey Kurkov, “a museum in the center of a small town is not just about art exhibitions – it can also host conferences, micro-concerts and presentations”. For these purposes, the center will also get a small amphitheater which will also be slightly reminiscent of the fact that back in the old days they used to play movies here. The lowering of the floor creates a second level of the hall without spoiling the integral perception of the inside space in its entirety, the way a simple closed room would do. This solution yields extra wall surfaces to hang pictures upon, while the “pit” is surrounded by showcases in which smaller exhibits or books can be displayed. The project of restoring the Zvenigorod Manège. The layout © People's Architect The project of restoring the Zvenigorod Manège. Axonometry © People's Architect

The most dramatic part of the interior is the exposed girders that run through all of the halls of the Manège. They appeared after the reconstruction of the 1960’s when the entire roof of the XIX century was removed, and the building got a buildup. The existing rafter system built half a century ago is now in an emergency state, and it will be fully replaced with a new one, keeping the pattern but leveling out the span in order to make the girders match the widened windows. The project of restoring the Zvenigorod Manège. The interior of the minor exhibition hall © People's Architect

The project of restoring the Zvenigorod Manège. The interior of the exhibition halls © People's Architect As for the exposition panels, the architects are proposing to fasten them to the buildup part, without having to violate the historical brickwork. The meter-and-a-half belt also contains the utility lines and the fire alarm system.

“The project of restoring the Manège and turning it into a museum is of the key importance for the town of Zvenigorod – says the cofounder of “People’s Architect” Dmitry Selivokhin – Essentially, this is one of the symbols of the city, which, for a number of different reasons was on the brink of extermination. Clearly, the restoration of such buildings is a very important and positive sign both for the local environment and for the country as a whole. The Manège will inevitably become the catalyst for the development of many social and cultural projects here in Zvenigorod, and we fully appreciate all the responsibility that it imposes on us. During the modern history, the building of the Manège several times faced the prospect of irreversible changes, and we take great pride in the fact that it is our team that has had the honor of recovering this monument of architecture for the city ensemble, all the more so with such a wonderful function as a museum. Thus, the building that used to be everything, including a warehouse, and now is a museum, having recovered the features of the architecture of the 1830’s without losing at the same time a few later-on additions, stands every chance to turn into an artistic highlight of the Moskovskaya Street – the main axis of the modern Zvenigorod’s center. The Stalin-era foyer endows it with “palatial” features, and the brickwork with its “thermal” windows gives it an almost Venetian brutalist charm. And, although we know that in the times of Emperor Nikolai the Empire style rarely left the brickwork exposed, in this specific instance this allowance seems to be reasonable: the beauty of the authentic brick and the non-trivial (albeit characteristic of that age) proportions has all the chances of distinguishing this building in the context of the surrounding houses – almost like a small Moscow-area Punta Dogana. Ultimately, the project meets the rules of the Venice Charter: the new is separated from the old, and new structures do not rest on old ones; utility lines are hidden away, and they do not spoil the impression from the building; the original elements are kept intact or restored. The result promises to be very interesting, and become a real gem of the city center, adding to its historical and cultural value.

Currently, the members of team of the museum are starting to develop the concept of the future exposition, “People’s Architect” planning to join them later on down the line. The museum is due to be opened in 2020.
Text by:
Translated by Anton Mizonov