Roman Leonidov architectural bureau has designed a villa community of Daryino-Uspenskoe, whose architectural solutions all but destroy popular stereotypes about life on the Rublevskoe Highway. 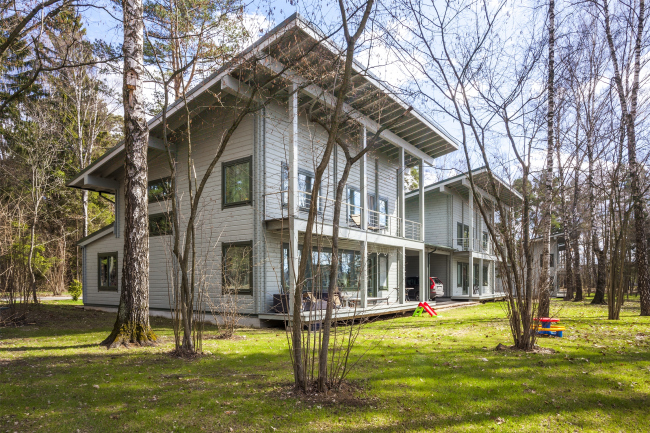 The settlement of Daryino-Uspenskoe is situated in the Odintsovo District, three kilometers away from the Rublevo-Uspenskoe Highway. The 55-hectare land site is situated in the center of the territory that is generally considered to be the most respectable place of Moscow suburban area, between the settlements of Nikolino and Lapino. On its east, it neighbors on the “academic dachas” of Novodaryino, on its north – on a settlement named “Diplomat”, on its west – on Novo-Nikolino, and its south border is marked by a creek behind which stands the new Saint Nicholas Temple. About two thirds of Daryino-Uspenskoe once used to be a farm field, to the north of which mixed woodland begins.

Initially, the developers were planning to build a large and dense cluster on the southeast part of the future settlement. For this, Roman Leonidov came up with a master plan in which the houses were grouped in the pattern of clover leaves. Then the client asked to carry the first stage over to the north part, closer to the woodland; the number of buildings was significantly curtailed, and they were arranged in a different way. Today, the territories of (1) the first stage that has already been put into operation and (2) the second stage that has been designed – are divided by a wedge-shaped land site that was divided into plots and put on sale without any houses on them. 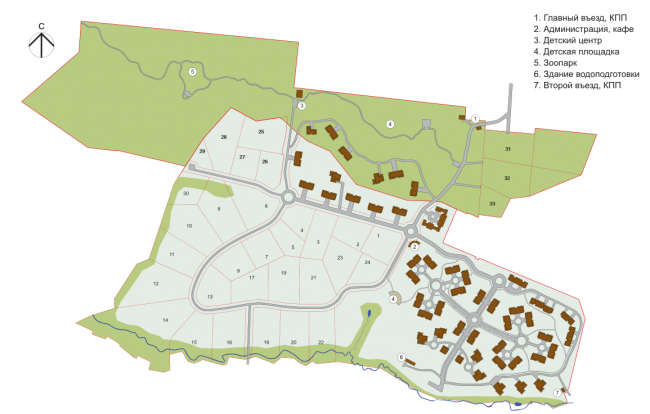 What makes Daryino-Uspenskoe different is the fact that this is a rent-out type of settlement; this housing was designed to be rented out, not sold. Roman Leonidov architectural bureau had a task of designing two types of projects different in their square footage. As far as the materials and technologies were concerned, the client was less specific and preferred to make to make choses in the process of construction, estimating the construction costs by trial and error. This way, the settlement got one log house, one half-timber, and the others – of a stick-frame type, because in the long run the client settled for this particular type. The settlement is dominated by linked townhouses two-stories high with a residential section floor space 240 square meters – there are ten of them. Three other houses are three-story villas 500 square meters each, and these are called in the project in the most literal way – “The Big Ones”. The “Forest House”, the only building of its kind – stands separately in the thicket. Ultimately, the whole first stage of the settlement is hidden in the forest – which to a large extent defines its architectural image. Unlike most of the Rublevskoe Highway area, the houses of Daryino-Uspenskoe look very open. Neither the villas nor the townhouses have fences or individual land plots of their own. What’s more, Roman Leonidov insisted that the houses should have no perimeter walks – instead of them, there are plants growing along their perimeters. The settlement looks very “European”, this impression being strengthened by the glass entrance doors and the absence of the base floor. It is planned that asphalt will only be laid on the access driveways; the other paths and trails will be lime trees boardwalks. The pile foundations, devoid of perimeter walks and habitual paving were also determined by the architects’ desire to preserve the landscape: they do not create a closed contour in the soil, and do not violate the established circulation of water, i.e. do not harm the old trees, some of which would otherwise perish. 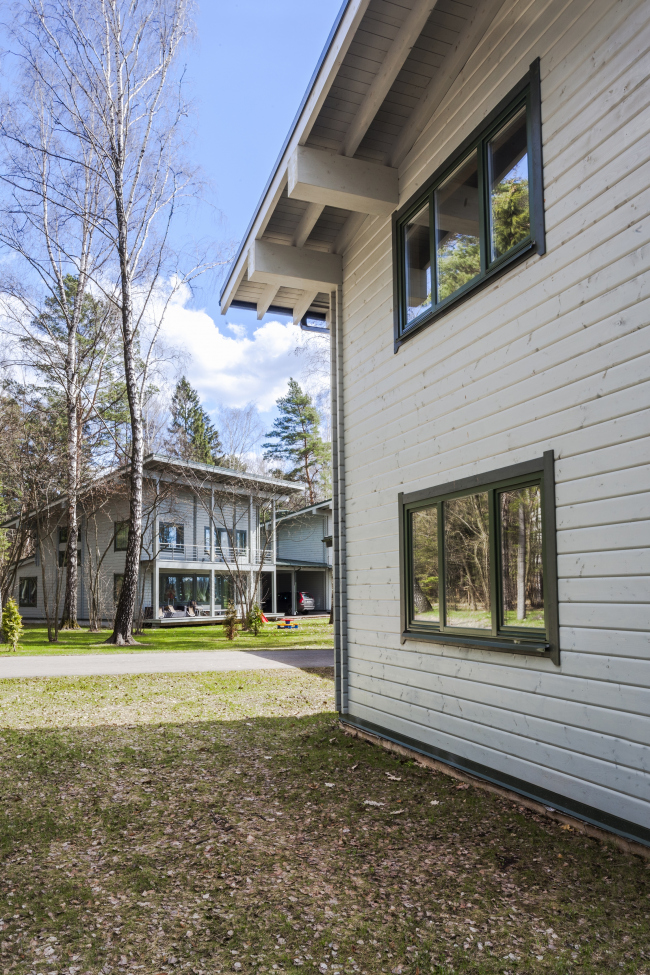 In the space-organizing solution, one can easily discern the signature style of Roman Leonidov: rectangular geometry of the façades, absence of any excessive details, and single-pitch roofs. In spite of the fact that the houses were built in accordance with a standardized project, the village looks anything but monotonous. First of all, the houses are placed in an irregular fashion: only five of them are neatly arrayed along the highway, the others being scattered among the trees. Second, the façade materials: some of the townhouses are decorated with wooden boards, and some – with fiber cement panels imitating brickwork, which makes the houses look different, even though in actuality there are no significant differences between them. The linked townhouses have no common walls; their sections are terminally open to the surrounding space but still existing individually. They are united not so much constructively as visually. The role of a link is played by the garage awnings. There no garages as such, neither in-built, nor separately standing: “As practice of using townhouses in the Moscow area shows, the garages are virtually never used to their direct purpose. Most of the time, the car is still parked somewhere just outside the house, and the garage is turned either into a gym or something like that” – Roman Leonidov explains.

From the side of the front façade, the first floor is almost completely glazed, an open-air terrace running along its entire length. Above it, there is a large balcony with a wide-spaced metallic railing. From the terrace, the door leads to the kitchen / dining room and the living room zone. From the opposite side, there is yet another entrance to the house – through the anteroom. On one side of it, there is a closet and a washing room, on the other side – there is an isolated room. The role of the “buffer” territory between the guest zone (which is open to the terrace) and the private / maintenance zone is played by the bathroom and a staircase leading to the second floor. According to the project, the side ends in the upper part of the second floor were supposed to be glass in order to create an impression that the roof is hovering in the air, and the windows must be of the “down-to-the-floor” type. However, the client had to give up on the stained glass idea for economic reasons, and on the idea of the large windows as well – out of fear that the tenants would be disconcerted by the absence of traditional wall-mounted radiators. As a result, the townhouses lost a little in expressiveness but functionally they did not suffer much: the roof descends over the bathroom, the staircase, and the children’s room, while the other two rooms of the second floor have windows on the front façade, and, in addition to these large-sized windows, there is also a balcony there. The “big houses” consist of three rectangular volumes of different height. The decoration of their façades uses three colors – dark-brown, beige, and white. In the he central block – the darkest and the tallest one – the windows are stretched vertically, while in the other ones they are stretched horizontally. The borders of colors here ignore geometric ones, thanks to which the houses look light and compact, in spite of their size.

The spacious balcony also serves as a garage awning capable of housing two cars. Beneath it, there is also the entrance to the boiler room. Two entrances to the house are situated in the “guest” horizontal sector: from one side, a person can enter through the anteroom/hall, and from the other side – through the dining room, which in this type of houses is separated from the kitchen. The other part of the building includes a guest bedroom and a bathroom. The second traversal “compartment” includes a staircase hall and a closet, the third – a large living room and a study. The second floor includes the master’s bedroom and two children’s room, separated by the nanny’s room. One of the two children’s rooms is very large, with a bathroom of its own, and, in addition, it is double-height, with a loft. From the side of the opposite front façade, on the third level, there is also a room equipped for cooking, with a spacious balcony, fit for family breakfasts and dinners in the open air. The arrangement of houses in Daryino-Uspenskoe does not follow any specific geometrical pattern: they look as if they were scattered around the landscaped site with its trimmed shrubs, lawns, and pieces of modern sculpture from the private stock of the owners of the settlement. At their disposal, the tenants will also have a children’s playground with a trampoline, a picnic zone, and a large public tent. The open character of the architecture of Daryino-Uspenskoe is to a large extent conductive of this territory becoming a single public space. “By renting the housing here, a person also is renting a lifestyle” – says the authors of the project Roman Leonidov. 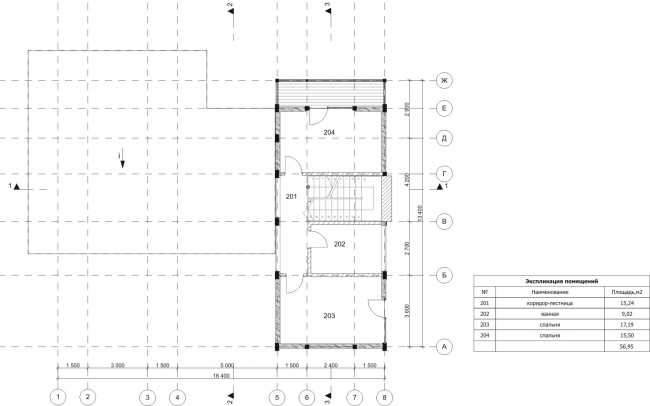 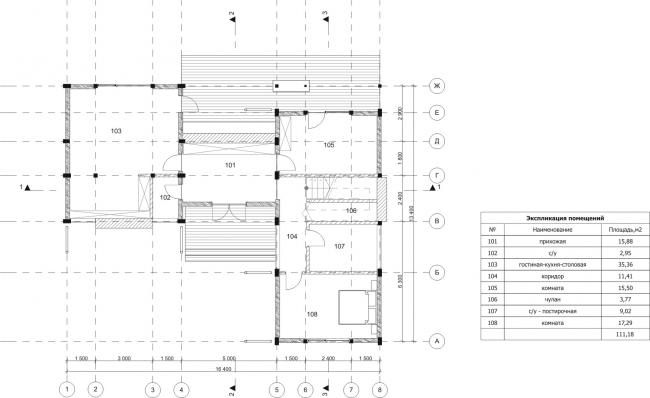