Vladimir Plotkin: “We wanted to create a free and transparent space”

Monday, June 12, was the last opening day of “Ottepel” (“Thaw”) exhibition at the State Tretyakov Gallery on the Krymsky Val. For Vladimir Plotkin, it became the first experience of designing an exhibition space. We spoke to the architect about the background of this exhibition and its main ideas. 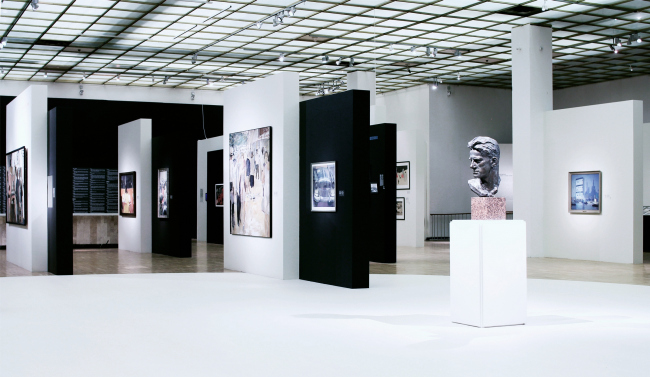 Vladimir Plotkin:
– It all came together rather unexpected. In the beginning of the summer of 2016, at the break of May and June, in fact, they called me up and invited me to do this thing. At first, I was hesitant. Then, in a few days, I met Zelfira Tregulova, and she told me that I was recommended, and they were already familiar with my works.

– Sergey Tchoban, primarily, but there were also other recommendations. I was recommended as an architect imbued with ideas of modernism, and hence, sort of close to the spirit of the Soviet Thaw epoch of the late 1950’s – early 1960’s. At first, I did not feel like doing this project because I had never done exhibition design before, apart from what I did for my own exhibitions. I at once went ahead and said that I had no experience in that whatsoever. But... anyway, somehow they were able to talk me into it. The idea kind of grew on me.

Then there was a 3-4 months’ hiatus. Still, however, I already started to do a brief survey of the examples of exposition design; hitherto, I did not give much thought to that subject, if at all. Visiting exhibitions and shows, I only used to pay attention to the content; now I started paying attention to how everything was organized.

– Were you ultimately inspired by anything? Did you find any positive examples?

– As a matter of fact, no! I just watched and gathered the design information visiting various museums, including modern ones. I was in New York and in Kalmar (Sweden), and just watched how these things are done. I visited a lot of museums.

In late September – early October, I met Zelfira Tregulova again, and they introduced me to the curators of that exhibition: Kirill Svetlyakov and two girls, Anastasia and Julia. We discussed their concept aimed at covering various aspects of the subject: the cultural, artistic, and social ones – different aspects of life, from which we form our idea of that epoch. Each of them is important, and each of them is represented by arts, science, and architecture, everyday household items, design, photography and cinema, various events and so on.

As far as the ideas of organizing space are concerned, I was only told that the exposition would consist of 7-8 sections, and that the section named “Forward to Communism” would be placed in the loft, which kind of suggests itself: the broad ramp that leads upwards in that building can really serve as the embodiment of the way up and forward. For my work on the exhibition I invited my colleague, Elena Kuznetsova. I expected that we were in for hard work on content and needs analysis, subject research, setting the task, generating the main idea, then the technical part... this is a precise and clear process, the architectural approach that can be applied to any creative or scientific activity. I thought that, because I was totally unfamiliar with the process on working on exhibition design, the work would take up a lot of time. However, it turned out that we got the whole thing going with just a few sketches. It became clear to me at once what I should do in order to organize the exposition in such a way that all of its aspects would be perceived simultaneously.

We proposed the idea of, let’s say, “stitched” or “staggered” transparent structure – not unlike the area plan of Moscow’s Cheremushki area. You find yourself in a space where you can see everything virtually from any given point. At first you get this general impression, and then you see the sections – you can come closer to examine any of them, in whatever order you choose. There isn’t any consequential idea; the visitors needn’t follow any rigid specific route. Besides, all the stands are pretty much the same, and they stand in a staggered order – and what we ultimately got was this kind of diagonal motion, like you make your moves from the center. There is also freehand planning and radial/circular effect – the stands are placed along the radial lines. I have the very first sketch that I did almost instantly. Here is the central hall (drawing). From this vantage point, we can read virtually all the surfaces, almost everything. There is only one closed element, the closed part of the exposition, it is called “Prelude. A Talk to Father about Times Past”. This is part of the curator’s concept. A father shares with his son about the war, about the forced labor camp, and about everything he’d been through. Then you come out of this black box and – bang! – you find yourself in this free space, light and transparent.

Then there was this idea that in the center should be a section entitled “The Best City”. But I thought that this would be wrong because, since we think that all the sections are equally valuable, the center must be a free and open space that would also represent part of the culture of those days in some way: take the poetic readings in the Polytechnic Institute or on the Mayakovsky Square, to name but one example. Speaking of the Mayakovsky Square – it was not there in the original concept, but this is how the central circle of light came about, a conditional city square, and the architects happily adorned it with the bust of Mayakovsky by the sculptor Kibalbikov. The third topic is the exhibition stands themselves. The idea is simple: it’s the thaw, the return to the routes of the Russian avant-garde and modernism after the years of Stalin’s totalitarian regime – pretty soon it became clear that we needed to make two-part compositions, very much like Lisitsky’s “Projects of Assering the New” (“Prone” in Russian for short). We ultimately came up with an interesting result: from above, you can easily read the exhibition’s layout because it consists of more or less equal elements.

About the black and white color code – initially, it was only white with occasional slanted black strokes meant to symbolize “July rain”. Then we decided that it would be too literal and too much. 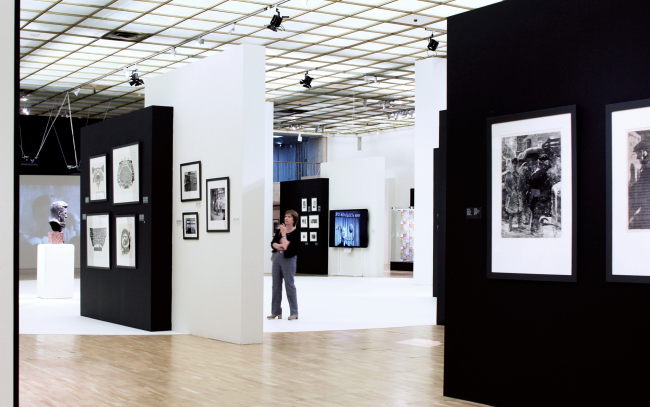 – Did the curators accept your idea at once?

– Yes, practically without a doubt. They said that the idea should be read as easily as possible, that it should be clear to everyone. Of course, it will take a person lacking some appropriate background, say, a non-architect, or maybe even an architect, some time to realize that he is actually walking through a city block just being among these stands. But once he gets to the upper landing, he will see it for sure. Mind, we did not mean to be so literal. We wanted to inspire this inner feeling, and I think we succeeded. But we wouldn’t like it to be read in a literal sense. I even regretted mentioning this idea at the press conference.

– May I ask you about your attitude towards this thaw epoch in general?

– My conscious childhood fell exactly on that period. All my school days are the 1960’s and a bit of the 1970’s. Yes, I do remember that time, all these movies of those days, and the spirit of the epoch. There were parties in my family going on, I remember the adults dancing twist and rock and roll, the works. Being too young to understand just what this whole “breath of fresh air” this was about, I, nevertheless, knew that a long-long time ago, practically in the Antique times of Homer, there was Stalin, there was the Great Patriotic War, and there were hard times. And now we were moving on to a happy communist future. Everything was brand-new, and every road lay open before us. These were my feelings as a child back in those days.

Right about that time, somewhere in mid 1960’s, still as a child, I suddenly realized that I would become an architect. I started reading every architectural book and magazine I could lay my hands on, even though there were no architects in our family. My family was what you might call “cutting-edge”: we had magazines like “America” or “England” lying around the house. And I would avidly read them – not because I was a young dissident and worshipped the west but because I was really into contemporary design, architecture, cars, and everything that meant progress and new achievements. I was greatly impressed by the movies of those days – the Soviet and foreign movies that were out during that time because they showed elements of modern cities. I have the most trivial impressions of the thaw – these were my formative years.
Text by: Vladimir Plotkin, Julia Tarabarina
Translated by Anton Mizonov