​Hotel at the Palm Island

The house that Karen Saprichyan designed at the man-made island in Dubai boasts all the features of a luxury resort, at the same time remaining quite an urban one, retaining its elegance, and demonstrating the author’s response to the context, both cultural and seaside type. 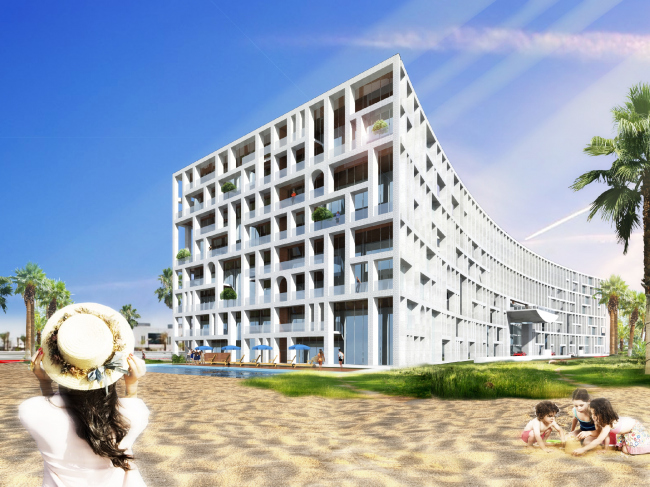 The apartment hotel Palm Jumairah Community will be situated on the outside curve that protects from the waves one of the two famous man-made islands at Dubai’s seaside. The Palm Jumairah island is located in the highly developed and expensive part of the city, close to a marina and golf courses, in the place where prominent towers intersperse with buildings of moderate height and clusters of expensive villas. Currently, GrandProjectCity is already building Crystal Jumerian Hotel here on the mainland next to the marina. The new apartment hotel is but a 20-minutes’ drive away.

The “Palm” islands are constructed in this way: the strips of land belonging to the inner “sheet” have on them private villas, while the elongated island that forms the outside contour includes the hotels. The outer shore facing the Persian Gulf is reinforced with rough stone; there is the Crescent Road Boulevard running through it which is in fact the only automotive artery here. The inner contour is covered with sand that forms the hotels’ beaches. Many of the hotels are already complete, and new ones are being built. Multistory buildings alternate with villas; vast expanses of land with parks and giant swimming pools do with smaller land sites.

The site of Palm Jumairah Community is one of the smallest. Like a narrow pencil case 250x55 meters, it stretches from the Crescent Road in the north to the sand beach in the south. The neighboring hotel on the west side is almost complete; the east neighbor is still in construction. Due to the fact that the site is fairly small, the house, together with its inner yards, occupies almost the whole of it. The plan of the building looks like a capital E, where the middle stroke, turned to the traverse inner street, serves as the main entrance lobby. The height marks of the 8-story building meet the island’s height restriction of 29 meters; there is a maintenance floor and a parking garage underground. In accordance with the desire of the client, Centurion Real Estate, the apartments are rather large, from 140 to 330 square meters; the smaller ones occupying the bottom floors, the larger ones, according to the penthouse principle, closer to the top. The size of the apartments, just as the very wonder-island location, gives the complex, in spite of the moderate size of its land plot, a fair bit of emirate luxury feel which is supported by a number of architectural solutions - especially noteworthy is the swimming pool that occupies the middle stroke of the E-letter at the third-floor level, stretching into a voluminous cantilevered awning above the entrance. Its length is 30.6 meters, its area is 257 square meters, and the volume of the basin is around 380 cubic meters. The floor of the pool is transparent; it rests on a grid of broad caissons, in the grids of which, if we turn up our heads, we will see the water and the outlines of the swimmers. The same reflection is to be seen in the awning above the entrance which should be quite a beautiful view in itself. Underneath the pool, behind the water-filled entrance awning, there is a double-height entrance lobby; above the pool, there is a 10-meter height of vacant space that flows into the balcony on the roof of the awning. All this is a rather radical thing to do from a technical standpoint but still realistic, given the modern technologies. And, more importantly, rather sci-fi and luxurious, seaside-style, and exactly in the spirit of Dubai and its man-made islands. Not having the luxury (no pun intended) of land enough to make a paradise garden, which is pretty much the custom here, Karen Saprichyan found a solution in the futuristic “hovering” swimming pool, from where the swimmers will be able to cast glances with their neighbors sitting in the hotel lobby. 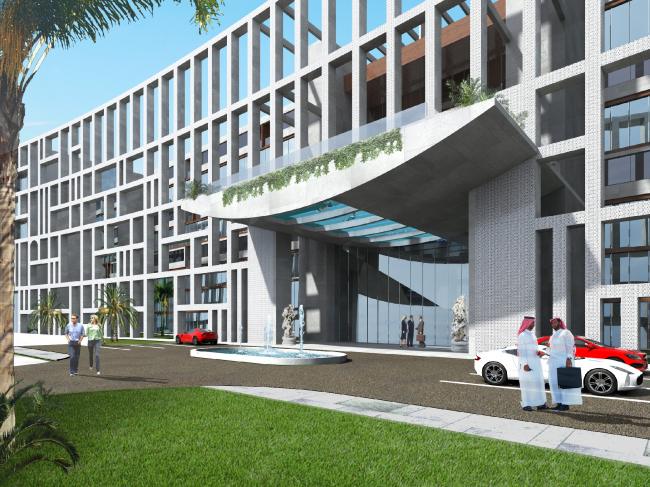 The second solution forms the outlines of the building. A simple unit of striped or glass floors, which are abundant here as it is, would have been, probably, all-too-trivial, but, more importantly, devoid of any shade, so, the architects placed the building into a large-cell voluminous grid. Its pattern was devised in accordance with the module that splits the cells in two, so the squares alternate with triangles, and, at some places, with “authentic” or even “metaphysical” Middle East arches. As if we would take the Arcade de Chirico and take it apart bit by bit, inserting some of the resulting fragments into an orthogonal grid. The upper layer of the concrete grid will be covered with aluminum panels decorated with small ornaments, backlighting them with colored LED’s with a few dynamically changing scenarios. The shoulders of the grid will be faced with stone, while the natural wood inserts on the façades are meant to complement the natural textures with the contemporary slit aluminum. 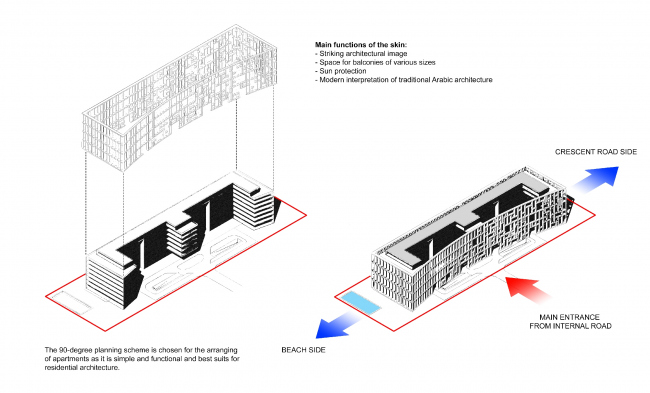 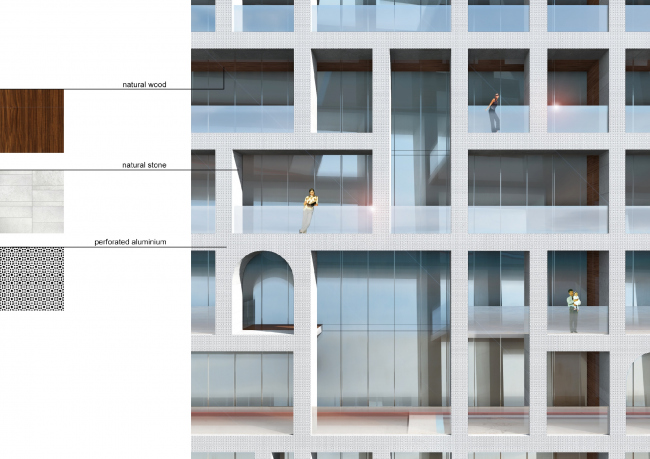 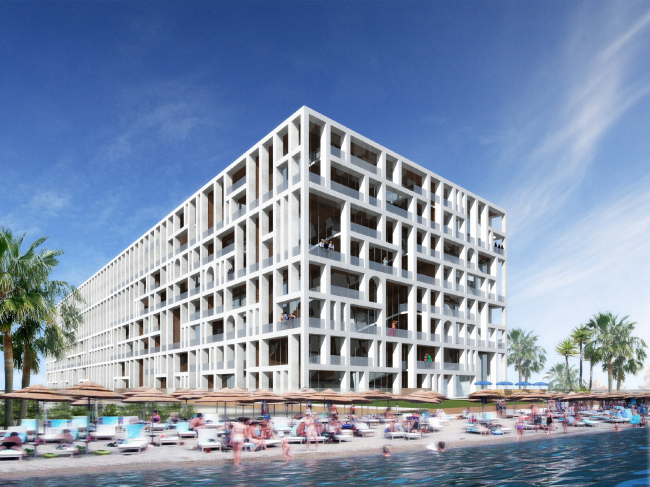 The grid shell encases the whole building, and, when viewed from the outside, it will produce an impression of a single elongated volume with a concave arch of the main façade. On the west wall and on the side ends the shell will mask the rows of deep balconies, while on the grand east side, besides the entrance, there are also two small inner yards, which is also very much in the spirit of the local tradition. When viewed from this side, this totally independent structure puts one in the mind of deconstructionist techniques of the 1990’s but, as an offset to this comparison, its edges do not hang in the air, and the picture is quite complete and self-sufficient. The grid casts a laced shadow on the yards and façades - exactly the kind that sunbathers love. “Our project is one of its kind – on the Palm Island you will not find a single one like it because all the other buildings are of the terrace southern type. And, as for our building, it is clad in a grid shell. It is rather decorative than functional – explains the leader or GrandProjectCity, Karen Saprichyan – in the course of our work, our team proposed as many as seven versions of architectural solutions. So, it comes as no surprise that ultimately the client opted for the grid version which was curated by the chief architect of the project, Vladimir Berezin”. The resulting architecture responds to the modern ornamental trends, and the same time combining urban and resort features. It even brings into the context of the palm “paradise” surroundings an element of structural integrity or even cultural background without losing, nonetheless, its "luxury" feel. Such a building will be noticeable both by day – because of the graphic pattern of the light grid with deep shadows – and by night – when its large-cell grid will shine different colors supporting the upbeat seaside resort atmosphere.
Text by: Karen Saprichyan, Julia Tarabarina,
Translated by Anton Mizonov 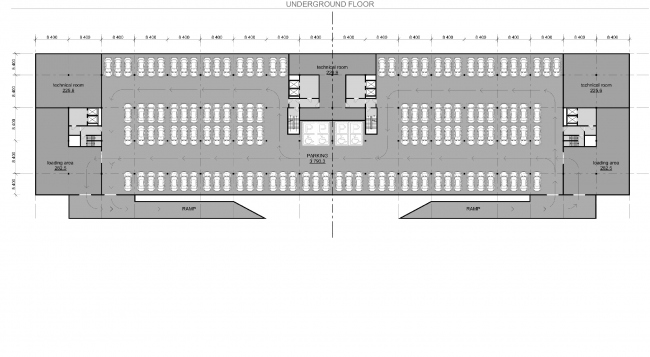 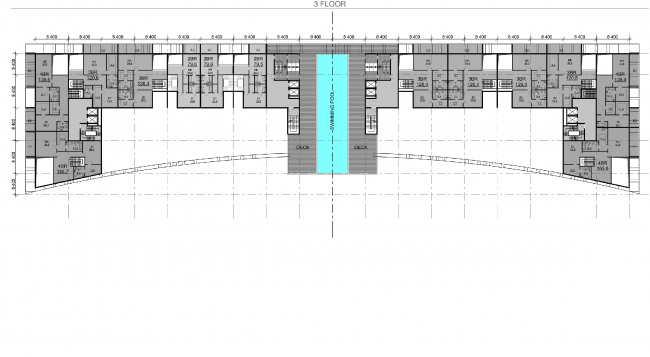