Nikita Yavein: "The more professional architectural companies there are on the market, the better".

In this article, we discuss the state of things on the architectural market, the professional education, the young colleagues, and the benefits of competition; speak about the transformation of “Zodchestvo” festival, and about the future plans of “Studio 44”, a company that has already been around for 25 years.

Archi.ru
– What can you say about the past year? At the international festival “Arch Moscow” you were elected as the “architect of the year”, while the British publishing company Thames&Hudson is preparing a book on “Studio 44”. How important are these achievements for you and your company?

Nikita Yavein:
– Thames&Hudson published an album about the building of Joint Staff that we restored. This book turned out to be rather popular. They’ve already sold about two and a half thousand copies, and the publishing company decided to capitalize on that success by publishing our monograph.

As far as my “architect of the year” status is concerned, I feel very much like Donald Trump in this voting. This status, just as the fact that in 2016 it was me who got it, can be viewed in different ways. To begin with, “architect of the year” means in fact “Moscow architect of the year”. Traditionally, the candidates are elected from a pool of Moscow architects based on our industry-specific understanding of what good architecture is. And in this situation it is a very peculiar fact that some group of Moscow architects elected a Saint-Petersburg architect considering my work to be of sufficient value and importance. I think this had also something to do with the fact that we are actively involved in exhibiting at architectural festivals. First of all, I am speaking about “Zodchestvo” where we won the main prizes several times. Currently, the festival is going through a new stage of its development, not to say “a serious crisis”, and its very nature is changing. A while ago it was going through an interesting, however controversial, period of searching for and trying new formats. But now it is becoming more and more obvious that it is losing its national status. Although in a slightly archaic format, it still showcased different regions. Now the share of the regional architecture is growing smaller and smaller. And this despite the fact that today the regions are coming alive and becoming active in terms of architecture. However, today’s “Zodchestvo” is turning into yet another Moscow-focused event, yet another platform for discussing Moscow problems and the problems that pop up in the regions due to the fact that Moscow architects are actively exploring them. Yes, “Zodchestvo” became more upbeat and less formal. There is definitely an upside to it but to me this festival has become less interesting.

But then again, this status of “architect of the year” is still important to me, among other things, because of the fact that I will need to do an exhibition, and I've been thinking about it for a long time. “Studio 44” has recently turned 25. I’ve been in the profession for nearly 40 years. We have more than once discussed the possibility of organizing the exhibition with different museums but we never seemed to find the time to go through with it. Thing is, you are always on the run, solving this and that, getting approvals for your projects, and things like that. But now we simply don’t have any other options. This will be the first exhibition that we will organize ourselves, and we want to make it a movable one. We will be able to stage it at different places and develop it. To me, it will be a great opportunity to reassess the path that I have traveled. – And how do you assess these 25 years – was it a straight line of development or a long and winding road?

– I think that largely this was a straight path, in spite of the fact that, viewed from aside, it could indeed look like a long and winding one. However, the entire search that I did fell in with a very clear-cut development vector. Looking back, I am sometimes surprised myself at how stubborn I was at trying to stick to it, no matter what. I think this runs in our family. According to the Confucian tradition, the son must achieve the dreams that his father was not able to achieve. And this is what I persevere in doing, creating an architectural studio that now you can arguably call an architectural school. The experience of working in “Studio 44” goes a long way to shape up an architect. I see this at the example of those boys who ready launched architectural companies of their own. And even if they don't realize it themselves, the influence of “Studio 44” is felt both in the behavioral and organizational patterns of their companies. 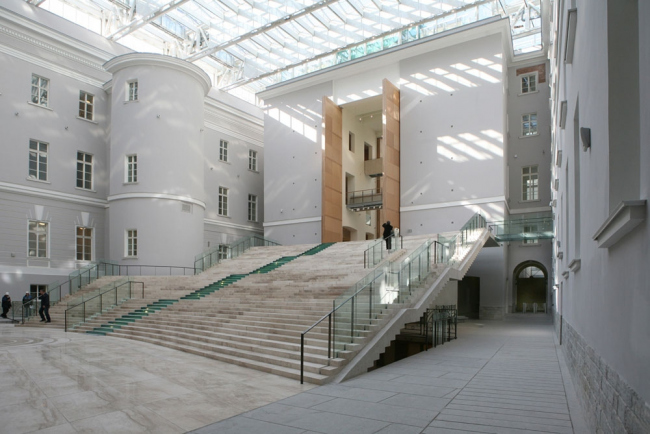 The State Hermitage Museum, the New Major Enfilade in the east wing of the Joint Staff, Saint-Petersburg © Studio 44

– How do you build your relationship with the young architects? Moscow recently hosted an exhibition and a conference devoted to architectural education, its further problems, and its further lines of development.

– And how can this crisis be solved? It turns out that the educating functions are being taken over by the architectural companies in which the emerging professionals begin to work. If these companies want to have qualified employees, they must take in as part-timers the graduate students and teach them the tricks of the trade, mustn’t they?

– We have long since been using this method. I do the teaching, and this allows me to see the potential that my students have. Practically all the young leaders in our company have been with us since they were third-year students. Our company does have the resources for educating and developing the emerging professionals. Our three studios each have a specific ideology of their own. A young architect will get an opportunity to try himself at different formats, learn the profession, and find his or her niche in the workflow. A lot of those architects who have been through our school, stayed with our company; two or three persons left to start companies of their own. And I am quite cool with that. The more professional architectural companies there are on the market, the better. – So aren’t you afraid of competition at all?

– You need to realize that those who leaves to start an independent practice, are mostly involved in interior design projects or designing small private residences at the most, but sometimes they do get to do larger projects. Today’s competition is really of a cutthroat kind, and the customer wants to absolutely sure he is getting his money’s worth, and this is what clinches the matter for us. Under such circumstances, only if he works for a large architectural company, will a young architect get a chance of being a part of a serious grand-scale project that he would never otherwise get his hands on, not until he’s fifty years old. But In this case you still need to give your young employees some extra motivation. For example, a partnership project when the chief architect takes on the responsibility for the work of his studio inside the company or for some grand-scale project. For example, Anton Yar-Skryabin, practically singlehanded, did with three or four colleagues of his, within a span of two weeks, a project for an Irkutsk competition, and they won it in flying colors. Or take Ivan Kozhin, for example – he is a great artist and designer, and we are shortly doing a small Moscow project. Vera Burmistrova is also great – I could go on and on. – How successful do you think you are in keeping an architect’s individuality under such system of professional growth that operates within a company known for its vivid and well-established image? Do you sometimes get a feeling that the Russian architecture lacks original and unconventional professional statements?

– As the recent WAF festival showed, there lack of individuality is a global issue, not just a Russian one. The exhibition clearly showed that all the architectural proposals and concepts could be easily divided into 8-10 types. Like gravel sorted out, they seem to fit perfectly into this or that cell. And the success of a project is just a matter of which of these cells is hot today. And, the way I see it, despite all the variety of the showcased projects, they were all pretty monotonous.

In our situation, things are still more complicated. Today, the main index of your professional competence is your professionalism and the class of the solutions that you propose. And it is within the framework of this class that you are to develop your individual style. And if your individual style comes down to the fact that your design skills are poor, and you try to replace them with beautiful 3D visualizations, what kind of professionalism can we talk about here? And this is to be seen everywhere, especially at contests and competitions. Sports and recreation complex of the judo school. Project, 2016 © Studio 44

– As a result of this, the cite architects that work in Russia’s major cities are the professionals who started back in the nineties. New young architects so emerge but at a pace not nearly as fast as we would like to see.

- Speaking of this, I would decide the entire market into two large groups: the big architecture, and the market of interior design projects. The latter is a lot easier to explore and find work at. And, hypothetically, you could use it as a springboard for getting into the market of big architecture. But the work in the main part of this field – half of it or maybe even two thirds – is done by design bureaus that are affiliated with construction companies. It is them that form the faces of our cities. The remaining part is done by the well-established companies that have a reputation and implementation expertise. Oftentimes, the customer will not choose an architect based on his victories in competitions, articles in magazines, or participation in exhibitions. And this explains the issues that we have with promoting our young talent. One customer talks to another customer, and he examines which approvals his architect was or was not able to get, how his project was implemented, and so on. They will check twenty five times before they ever turn to a different company or a different name. This is a totally members-only club, in which the companies compete, not in terms of whose project is better or more original, but in terms who will be more efficient in getting the municipal approvals for construction. Unfortunately, such a situation is conductive of neither appearing new interesting teams nor creating new interesting projects.

– And what is the situation with “Studio 44”? What have you been able to achieve, and what are your plans for 2017?

– We landed a number of very serious contracts. Whether or not all of these projects will be implemented is hard to say yet. We’ll see. But among these there are huge housing projects in which I would like to try and implement a few groundbreaking approaches. We are actively involved in working with the regions – Tomsk, Sochi, and other cities. The Tomsk project, as I hope, will become a real breakthrough, first of all, in terms of its construction technologies. We have a goal of redeeming wood as a full-fledged building material again. 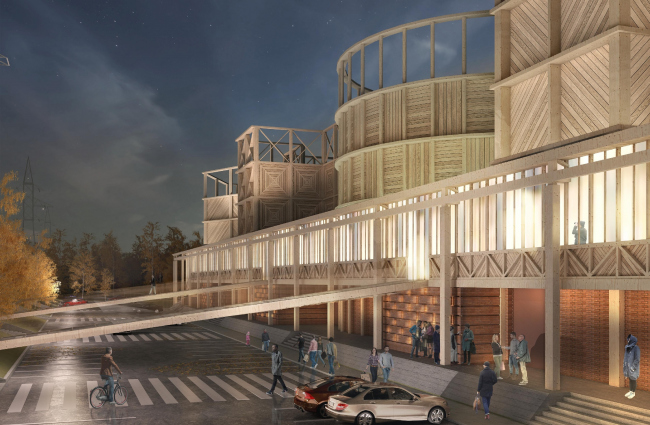 Concept of Science and Technology Museum in Tomsk © Studio 44