A Skyscraper As a Source of Alternate Energy 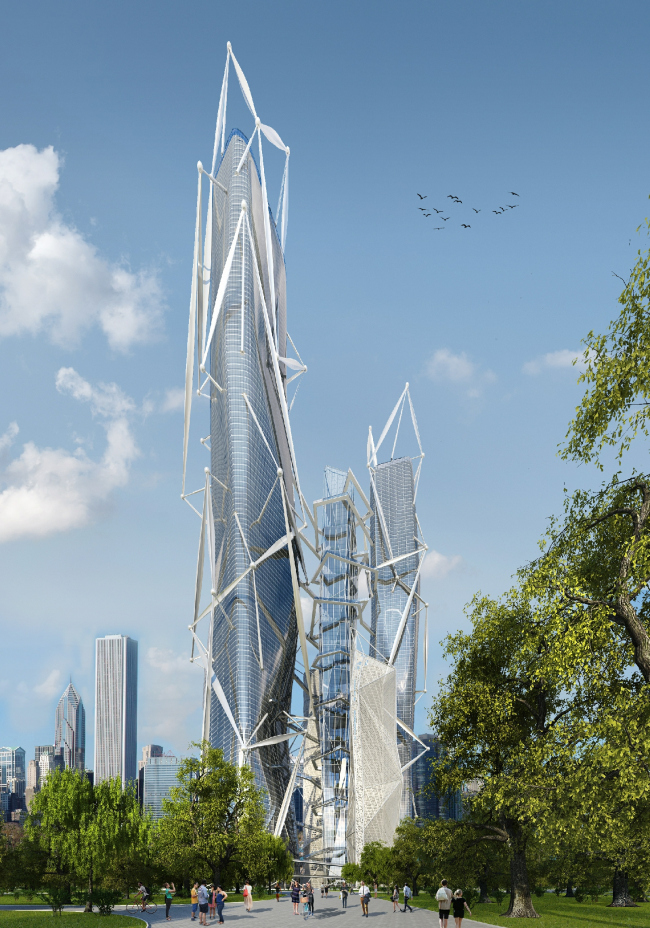 A skyscraper capable of independently producing electric power was showcased by Arch Group at the international contest organized by Evolo Magazine. And, although the project did not get shortlisted, the very idea that it is based on deserves a special coverage. It has not been tested in practice yet but the authors are convinced that if it becomes a success it will change our whole view of alternate energy sources.

The latter are really numerous in today's world: people have learned to utilize solar power, the energy of wind, earth, and water. In all of these cases, however, the amount of energy produced directly depends on climatic conditions. In the regions that lack wind and sunlight - which is most often the case in Russia - such technologies are not really effective. They are also unfit for large cities with their dense construction and huge consumption of electric power. Thus, universal sources of energy that would rival the hydro or atomic power plants still have not yet been invented. The issue of searching for an alternate source of energy has long since interested the leaders of Arch Group, Aleksey Goryainov and Mikhail Krymov. "We bet everybody would want a car with endless fuel - Aleksey Goryainov explains - and what if we design a building that's capable of generating power independently in any place of the planet, not depending on the sunlight, wind, tide and ebb, or hot springs?"

The next question that the designers asked themselves was: what is it that the building can generate power from? Because you need such a source that can appear everywhere where you need a house! The answer suggested itself - such source could be the people that daily fill this house and then leave it - this will indeed work in an "tidal wave" manner. As an example, a large office center in a skyscraper was taken. According to preliminary calculations, a building 600 meters tall houses about 20 thousand people. Add to their mass the weight of the cars that will be parked at the bottom of the skyscraper. All this yields a huge figure - several hundred tons. In the morning, from 8 to 10, people fill in the building, in the evening they leave it - and its weight changes. The authors propose to use this weight difference to make electricity. 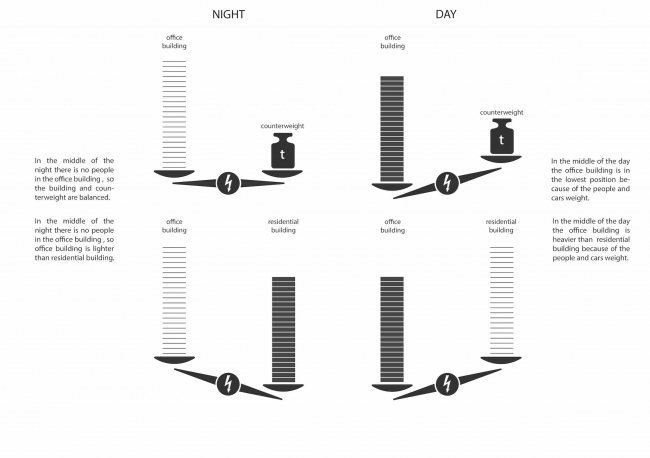 The architects developed a mechanism thanks to which, under the pressure of the people and cars that fill it, the skyscraper could sink about 20 meters down into the ground and start generators going, while at night it would spring up again, also generating power. "Let's imagine that our skyscraper is by default balanced with a certain counterweight - Aleksey Goryainov explains - When the people fill it in it starts sinking because now it is heavier than that counterweight. At night, the people go home, and the counterweight brings the building back to the default position. Thus, moving up and down like a pump bucket, it constantly generates power". As for the counterweight, the architects propose that it should be... water! Making an counterweight with a mass equal to that of the skyscraper out of concrete or metal would be prohibitively expensive. Water, on the other hand, is a different matter - with a minimum investment, it can also be used as an artistic tool. In their project, for example, the authors surrounded the territory around the tower with a reservoir hiding underneath it two or for sub-reservoirs. When the skyscraper goes underground, the cubes, filled with water, rise above the surface of the reservoir. The excess of the water flows down their facets in waterfalls turning these structures into a semblance of a kinetic sculpture. At night, the cubes with a constant mass of water inside of them submerge again.

Another version of the counterweight is a residential building with a reversed phase cycle. In the morning, people leave their apartments going to work or to school, and at night they come back. Of course, in this latter case, the process of the people filling in the building is significantly stretched out in time. However, according to the architects' estimates, this will also be enough to serve the function of the counterweight. The damping force from the counterweight - be that a body of water or a residential house - would be relayed by a hydraulic system. The skyscraper project for Evolo-2016. Example of positioning skyscrapers in the city © Arch Group

The project also provides for different options of placing the skyscrapers around the city. In theory one could create a whole network of skyscrapers that constantly redistribute their weight amongst them. Between the residential and the office towers, the authors propose to build a static "garden" tower. It does not move anywhere but it serves for the office employees’ recreation. Connected to the two other buildings by spiral overpasses, such tower would become the finishing touch in creating a fragment of a self-sufficient urban area that is capable of providing people with everything they need. The skyscraper project for Evolo-2016. Plan of the typical floor © Arch Group It is expected that the building will be sinking down rather smoothly so that the people inside of it will not even feel anything. As for the entrance, it will be executed in the form of a ramp that will work something like a springboard changing its angle from steep in the morning to gently sloping at night. A similar ramp is provided for the cars. The skyscraper project for Evolo-2016. The diagram of the building's movements © Arch Group

The outward appearance of the building is rather conditional yet - the authors say. For the contest, they proposed a tower with a glass facade surrounded by a semblance of external skeleton - a 3D mechanical structure that bulges and shrinks during the day following the building's vertical movements. This is why, as the skyscraper will change its position, its silhouette will be changing too - stretching into a string or bristling like a hedgehog. The flexible units of the external skeleton may have in them extra generators also making electricity. Generally, the constant movement of the skyscraper allows for implementing kinetic versions of the façades that are most diverse. For example, you could make a two-layer facade with one layer moving and the other static: while moving, the pattern constantly changes, yielding a moire effect. There was an even more sci-fi idea, according to which the building not only could go up and down but also spin around its axis - going down; it would sort of screw itself into the ground. 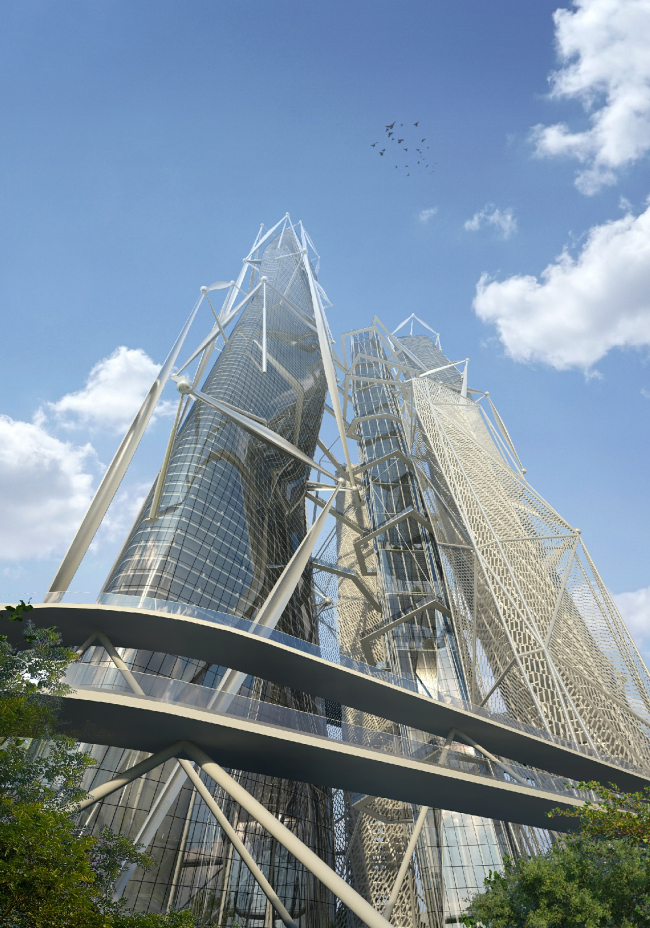 So far, there are exact figures of the amount of power produced in such a way, and the efficiency of the project is still unclear. But if the solution that they propose helps to at least partially reduce the energy consumption - and virtually any high-rise consumes a lot of energy - and if the energy produced in this way is enough to cover at least the needs of the engineering lines, the authors claim that this will be already a significant achievement.
Text by: Alexey Goryainov, Mikhail Krymov, Alla Pavlikova
Translated by Anton Mizonov