The Garden I Dreamed of...

The kindergarten project in the city of Beloyarsky is not only energy-efficient and fit to meet the challenges of the local tough climate but is also designed to renew the outdated norms based on outdated views of the preschool education. This is a "reform" project.

The project of a kindergarten designed for 220 children was developed by "City-Arch" for the Khanty-Mansiysk autonomous district still in 2014; then, in 2015, it was nominated for the "Golden Section" award, and discussed at various forums and conferences, it won a silver prize at the ecological development and energy efficiency contest "Green Awards" in the nomination of "projects of social sphere", and won the second prize at the national contest "Eco Tectonics". However, the project has not been put into implementation yet. The reason? Too innovative! The project is an example of the fortunate case when architecture dictates the users a direct, and fundamentally new, form of living one's life in it, thus changing the reality. But, since we are speaking about a preschool institution here, where the rigorous system of construction and sanitary regulations leaves virtually no room for maneuver, it comes as no surprise that its implementation has been slow to come. However, one can still hope that the Khanty-Mansiysk project will be able to make a groundbreaking difference to the practice of designing kindergartens and nursery schools in Russia.

While still in the preparation stage, the authors of the project studied the expertise of the west European and Scandinavian countries in the organization of nursery schools and kindergartens, as well as consulted the developers of the preschool education program "Yugorsky Tramplin" ("Yugora Springboard"), specially designed for the Khanty-Mansiysky autonomous district. The main goal of this project is taking on a whole new level the system of preschool education with laying the main stress on the all-rounded integrated education of children. It was at that preparation stage that the authors of the project came to a conclusion that our rules and regulations on the construction of preschool educational facilities are outdated and do not answer the principles of today's pedagogy.

The volume of the building consists of the main elongated block two stories high, that looks like a boomerang on the plan, and an adjoining diamond-shaped block. Such shape helped the architects to "humanize" the proportions of the building designed for the child's perception. The main entrance groups are turned in the direction of the overall flow coming in from the residential area. They have color accents that facilitate visual orientation when the child immediately understands where to go and where his class is. The main block can be accessed from the street by three individual entrances - this is where the classes or "groups" are situated where the parents bring their kids and where the kids spend most of their day. The individual entrance groups allowed the architects to divide the premises into "clean" and "dirty" zones. It is expected that the minors will be accommodated on the first floor, while the preschool kids will be placed on the second. Further on, it will be possible to transfer the the "groups" on the second floor into the classrooms of elementary school. 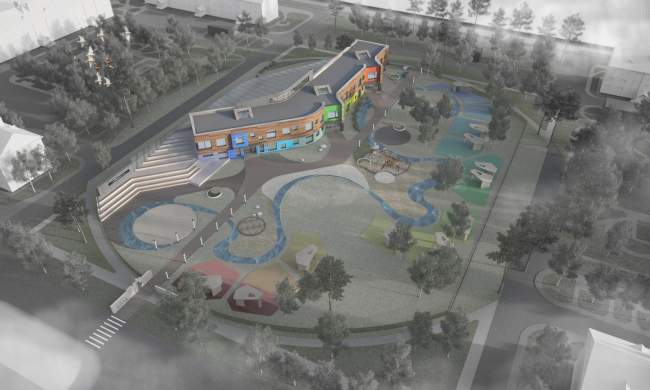 So, what is innovative about the architects' proposal? First of all, they give up the classic corridor system and create a common double-height playing space inside the building, a peculiar "yard" accessible from all the classrooms. According to the applicable regulations, the children of different ages are not to contact one another within one kindergarten (the principle of group isolation), which, again, contradicts the results of the latest pedagogical research. Today, it has been proven that a child's development gains tremendous momentum specifically in the course of his communicating with children of various ages. Children need space that will give them the opportunity to take part in discussions, practice sessions, and even teaching other children (when elders teach minors, both absorb information better). The common playing zones are located in the adjoining diamond-shaped annex: this is a double-height spaced with a sun tube. In order to increase the visual connection between the annex and the main part of the building, the architects made some of the classrooms' walls out of glass. One can access the common playroom from the second floor by exiting out to the open galleries and descending down a spiral staircase or even a spiral slide! Apart from the expected playgrounds, the big playing zone is going to get a rock-climbing wall and an amphitheater for making mass events. Yet another important novelty - the layout of the classrooms - is also a novelty for this country in general. Practically the entire space of the classrooms can be used for playing games. The three-level pull-out beds are placed along the walls, while the only rooms that remain isolated are actually the bathrooms (that also have glass window elements installed for safety reasons and in order to let the teacher stay always in control of the situation); the locker rooms can be used for games. Inside the classroom, there is a mini-kitchen hidden in a wall recession - here the ready food only gets prepared for being distributed; it is also possible to wash the dishes here but generally the food will be prepared in the large specialized kitchen in the north part of the building.

Thus, optimizing the configuration of the whole building, the architects saved up to 14.7 square meters of useful area per child - and significantly increased the playground area allotted for each child: up to 10.5 square meters instead of the regulation 2-2,5 square meters - almost four-five times as much. The development of the child in the course of the game goes quicker when he or she moves more and gets exposed to his age mates, shows initiative and chooses the forms of his activity. The architects also provided cozy little nooks for children to play alone or in small groups. The main principle is flexibility and multifunctionality, diversity of the forms and textures, and mobility: inside the classroom section, with the help of transformable furniture furniture, one can create secluded spots so as to break the children into groups, should such need arise. Kindergarten in Beloyarsky. Plan of the 1st floor. Project, 2014 © City-Arch Kindergarten in Beloyarsky. Plan of the 2nd floor. Project, 2014 © City-Arch

In the second part of the building, under the gable roof, besides the common playing zone, there is also a swimming pool, and a gym that can also be transformed - by using special partitions - into smaller gyms for toddlers or can be joined to the playing zones; a kitchen with storage space equipped with an individual street entrance (to load in the food ingredients), administrative and medical offices located closer to the swimming pool as the potential hazard zone.

Yet another important point that the authors of the project had to take into consideration was the project's effective functioning in the extreme north conditions where in the wintertime the temperature drops below 50 degrees Centigrade, and the ground freezes three meters down. Of course, what was important was maximum efficiency combined with minimum loss of heat. But then again, for Valery Lukomsky who has built several successfully functioning buildings in that same Beloyarsky - let's remember "Nuvi At" Center and the Ice Palace - the building of the kindergarten that does not lose a drop of heat in the wintertime only became a continuation of the already-formed tradition.

The architects based themselves on the "passive house" principles - specifically, they came up with the idea of positioning the building in respect to the cardinal points in such a way that the classrooms are all oriented south, and their big windows not only make the facade look more attractive but also catch the warmth of the sun during the hearing season. In the summertime, however, special glass will retain the heat and will make air conditioning redundant. The closed parts of the building - the swimming pool, the gym, the kitchen, and the maintenance rooms - are situated on the north side: here the slanted roof makes the volume particularly compact; in this part, the architects make do with the functional minimum number of the windows. Besides, the whole building is moved to the north part of the land site so as to free as much as possible territory for the children's walks on the south side. 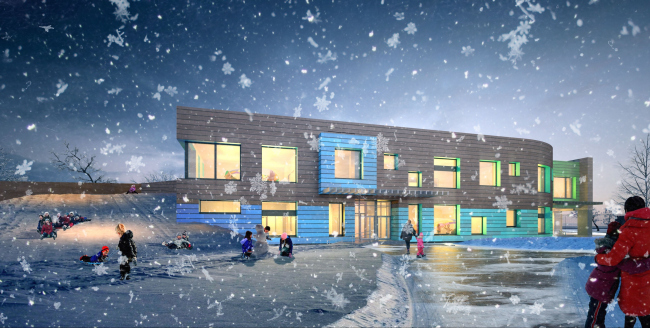 Kindergarten in Beloyarsky. Analysis of the temperature measurings. Project, 2014 © City-Arch From the energy conservation standpoint, the main task was not so much the conservation of the resources as creating a healthy microclimate. In order to minimize the energy losses, a unique airtight casing was developed that forms a closed heat perimeter without breaks and "heat bridges": according to the architects, the only "little bridges of cold" are the columns that the architects decided to keep because the pay-off period in this frozen region is over eighty years. It is planned that the façades will be warmed up by the mineral wool insulator 400 mm thick with a high degree of cohesion, and coated with ceramic granite tiles. The basement and the metallic roof are also warmed up and airtight. The authors also paid a lot of attention to the inside engineering work. In order to sustain the optimum conditions, the building is equipped with a mechanical ventilation system with recuperation of heat that feeds in the fresh air with controlled parameters. Sensors are keeping track of the percentage of CO2 in the air: they react to the number of children and the degree of their activity, changing the temperature and increasing or decreasing the inflow of air. At night and on the weekends, the temperature will be lowered. All the building's floors are heated. This system helps to maintain the air temperature at the minimum values, and one will still be comfortable. The low windowsills, not more than 40 centimeters high, do that the children could look out the windows and see what is going on outside (visual connection to nature and society) – are also heated from beneath. 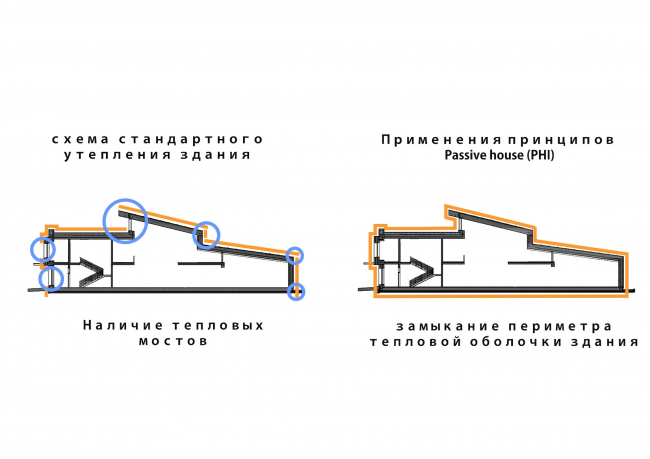 The outward image of the building is just as interactive as its inner "wiring", and is also oriented towards communication with the children and their parents. The façades around the three entrances that lead to the classrooms are coated with colored ceramic granite - each entrance is marked by a bright colored spot whose outlines smoothly bleed into the surrounding "natural" wood grain. Next to the entrance, under the staircases, there are extra toilets: the children will be able to use them during their walks; it will also be possible to wash the toys here; the toilets will also come in handy for their parents - in standard kindergartens nothing of the kind is provided somehow, which is really inconvenient at times. From the west side, the building is adjoined by an amphitheater for music and theater performances, this amphitheater also serving as the second-floor emergency exit. In winter, the amphitheater will be converted into a slide. The kindergarten project developed by "City Arch" is the first of its kind; it has no analogues in this country so far, and one can only hope that "the ice will be broken": the project will not only be implemented but will also give an impulse to the development of the architecture of preschool institutions, as well as for the very system of preschool education in Russia.