About the project developed by "City-Arch" bureau headed by Valery Lukomsky - the project became the basis for the reconstruction of the "Meshcherin" building of the Danilovskaya Manufactura. Valery Lukomsky and the architects of "City-Arch" studio are sharing about the central ideas of their project of renovating Building PK-7, now known under its historical name of "Meshcherin", part of the Danilovskaya Manufactura. We are giving the floor to the architects:

"A few years ago, back in 2008, our company "City-Arch" did a reconstruction project of the building of the former Danilovskaya "Manufactura" ("Textile Factory") on the Novodanilovskaya Embankment. The first weaving mill belonging to the company called "Danilovskaya Manufactura" was founded by the Moscow top-guild merchant Basil Meshcherin but as early as in the first half of the XVIII century, this area of Moscow, at the time known as "Danilovskaya Sloboda", was the place where craftsmen worked, and some small-scale machine production appeared. What Meshcherin did was create a full-cycle factory: here yarn was spun, fabrics were woven and dyed, and the printed patterns were applied on them. The convenient factory premises for 250 workers contributed to the factory soon getting a reputation for being a model enterprise by the standards of those days.

Later on, in the early XX century, when it was managed by Baron Ludwig Von Knop, the factory got a foundry which provided an opportunity to manufacture weaver looms of its own. By that time, there were already 1200 employees working at the factory.

In the soviet time, the factory became state-owned, and it the late XX century it was abandoned. Now the building hosted a flea market. Nobody maintained either its infrastructure or its communications; the beautiful brick walls were literally falling apart. The new milestone in the history of the factory was brought by the Moscow program of reorganization of its industrial territories: it was decided to reconstruct the factory buildings and create a block of lofts. By the moment the construction began, which was in 2006, there was little expertise of such work in Moscow, and the talented developer KE Properties was using the successfully reorganized and unique in their atmosphere loft quarters of London and New York as a model to follow.

The projects of the buildings were developed by different architectural firms, including our "City-Arch"; the result turned out to be a success - we came up with glass overpasses, metallic additions, and massive steel constructions. We replaced all the communication lines with new ones but left them open and visible.

The large buildings were named after the founders of the factory: "Meshcherin", "Knop", then there is also a building named after the hero pilot Gastello, and one named after the entrepreneur Soldatenkov. The minor buildings are called "Flannel", "Sateen", "Calico", and "Batiste". The whole complex of the buildings is a classic example of the red-brick architecture of the XIX century Moscow which in itself was enough to define the direction of the reconstruction. 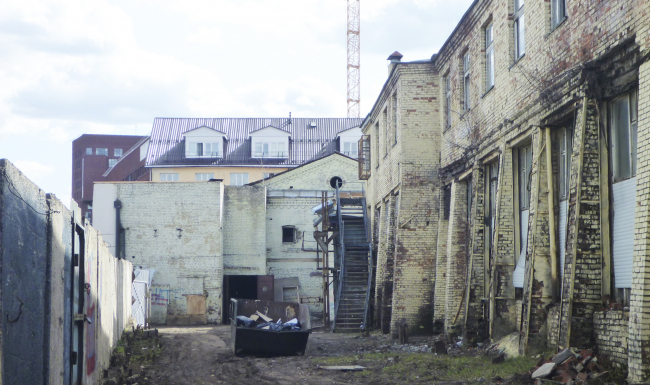 In 2014, we continued our work on the complex, and this time around we got down to the largest building of Danilovskaya Manufactura, Building PK-7, again, employing the loft aesthetics. Later on, the building got named "Meshcherin", after the main founder of the factory. We were faced with a challenging task of preserving the historical image of the building keeping it at the same time from looking too bulky, and, believe it or not, increasing the number of floors, and widening the sidewalk from the side of the Novodanilovskaya Embankment. From the functional standpoint, we were to divide the building into three zones: a food court for the employees on the first floor, the showroom zone, and the office zone.

There were also new conditions to occur: the densely overbuilt urban area around, the presence of pre-developed sketches and plans created by other architectural firms, specifically, ADM, and other decisions that the customer had made earlier. Some conditions were also set by the fire safety rules, the cramped conditions of the passage of fire engines, and doing reconstruction in general. The story of the engineering lines of PK-7 deserves a special mention. In order to remove the water from the basement during the seasonal flood, a brick collector was used that is now in a flooded dilapidated state. One of the most important solutions of the project was the open air gallery on the first floor running parallel to the embankment - this was done in order to broaden the sidewalk and improve the quality of the pedestrian environment. The showrooms are turned to the gallery with panoramic stained glass windows; all put together refers us back to the typology of the antique urban street but, first of all, Paris's famous rue de Rivoli. The arcade must become a cozy and at the same time busy urban territory, the catalyst of the local social life, and an important atmospheric accent of the complex. The building itself is rectangular, it stretches along the embankment, while in its bottom part it is divided into two almost equal parts by an arch that connects the sidewalk of the "rue de Rivoli" to the inner yard. On each side of the arch, there is an individual entrance lobby. The top floors are fractured into large office lofts, each of which is connected to either of the two lobbies, and has an extra emergency exit. The two-story annex with a mansard that adjoins the building on the left was divided between the offices in its main part and a restaurant on the first and second floors, the top level being occupied by a common metallic staircase. The walls were restored and repaired with artificially aged bricks. The architects also preserved the height vaulted ceilings, the intermediate lofts, and the cast-iron and concrete columns. What got dismantled was only the inside partitions and the roof that got replaced by the loft floor. They also restored the fireplaces, and the large windows with arched links. The engineering lines were completely replaced with new ones but, in the loft spirit, left open and viewable. The texture of the buildings dictated the use of wood and black metal. Yet another success, in our opinion, was our solving the problem of keeping the right proportions and our using, in the build-up floors and the warm roof, the material that is radically different from the red-brick historical walls - the dark metallic Reinzink roof sheets. This was also enhanced by the steep slant of the gable roof of the mansard. One of the important uniting elements of the project is a massive steel double-L beam, the core of the bearing structure of the historical building. The double-L beams used in the interior were meant to remind one of the fact that this place belongs to the class of industrial facilities. The design of the lights hanging from the ceiling uses thick ropes that remind us of the "weaving" essence of the mill. "A window to the past" is also provided by the tile pattern that repeats the ornament of the fabric that was manufactured at this mill in the late XIX century. 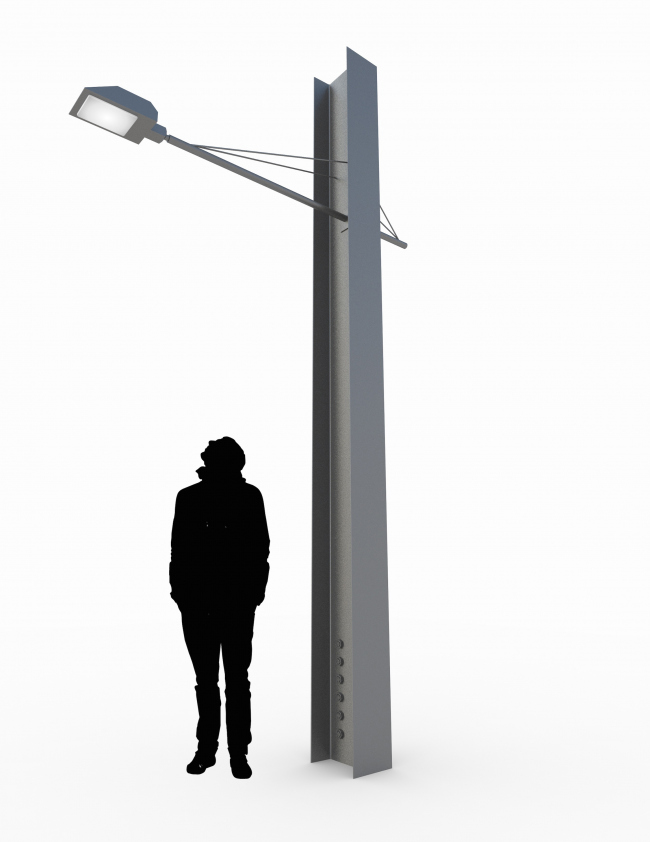 Currently, the work on renovating the "Meshcherin" building is drawing to a close, and we hope that the developer will create a modern urban territory, at the same time preserving the unique architectural spirit of the time of the industrial revolution of the late XIX century, while the building itself will adorn the Novodanilovskaya Embankment".