Julius Borisov: "We tried to express the power of nuclear energy with the help of the senses"

Julius Borisov, the founder of UNK project bureau, told Archi.ru about his project of the Atomic Energy Pavilion at VDNKh in Moscow, chosen for implementation based on the results of an international contest.

Archi.ru:
- How was the work on the project going? What factors was it influenced by?

Julius Borisov:
- We faced to problems while working on the project. The first one was the city planning tasks based on the context. That is, on the one hand - the historical heritage - the special ensemble of VDNKh; and on the other hand - the wish of the client, State Atomic Energy Corporation "Rosatom", to make a pavilion that will be admired both by the branch employees and the general audience. At once, it created a certain conflict.

On the first stage of the contest, we resorted only to the context, used the approach through the cultural component. But this approach soon proved to be insolvent. Both the representatives of Moskomarchitektury and the All-Russian Society for Protecting Historical and Cultural Monuments saw it too.

To find a solution to this conflict was the task of the second stage. We went along with our favorite trends - purism and minimalism in the interpretation of the construction and the "art-gesture", but at the same time, tried not to miss the meaning of the project.
We decided to compete with our colleagues on the level of ideas instead of the level of forms. Our team was the first to set a task not to visualize the area of nuclear energy through formal symbols familiar to all of us (the atom, atom bomb), or through architectural elements and archetypes (cornices of the neighboring pavilions, streamlined "futuristic" forms, symbolizing the innovation of nuclear energy), but through the sense - to give room for the visitors to feel this energy, sense what happens inside of the atom, rather than learn about it. In our project, we tried to translate this condition on a sensual level. Basing on these principles, we have developed an architectural concept that creates an illusion of affecting the visitor: a giant console hangs over you and it is unclear how it is fixed - just as a person cannot understand the inner connection of the atom and the neutron. It is not a graphic demonstration of a model of an atom, but an effort to express the power of nuclear energy through senses. - What defined the architectural solution of the pavilion?

- Due to the wish of the client to have an innovational construction, which I have already mentioned, we took all the peculiarities associated with the architecture of exhibition areas and pavilions into account while planning. We tried to propose our interpretation of both the VDNKh ensemble and the exhibition areas in general.

The VDNKh complex contains repeating elements that we have decided to use. The first one is the large number of arcades that create public spaces in the open. This method is seen both in the oldest pavilions of VDNKh as well as in the constructions of 1970s. These are transitional spaces for the public between the street and the pavilion itself: thanks to them, a person is not directly “dragged” from the outside into the closed exhibition hall, but gets in there through an open but already arranged zone.

We allocate half of the room for transitional space in our project. The glass triangle is warm, it is not an out-of-door area, but it does not serve for the main exposition. The second method is the high rising console. It is a typical approach for the architecture of exhibition pavilions (take for instance the Milan pavilion of Sergey Choban or some of the VDNKh constructions); and it is a rather complicated construction from the point of view of building technologies.

The third method implies that all our projects are well thought through, not only on the level of the general concept, but also on the level of the details - the texture, windows, door handles etc. In this project, the complex parabolic shape is thoroughly elaborated from the point of view of the texture and finish: special, peculiar, it has small projecting steps whose rhythm is comparable with the design of other VDNKh pavilions. People are not always used to comprehending the general concept of a building, more often, they only sense it without understanding - at that, work with texture is understandable and noticeable to everyone. 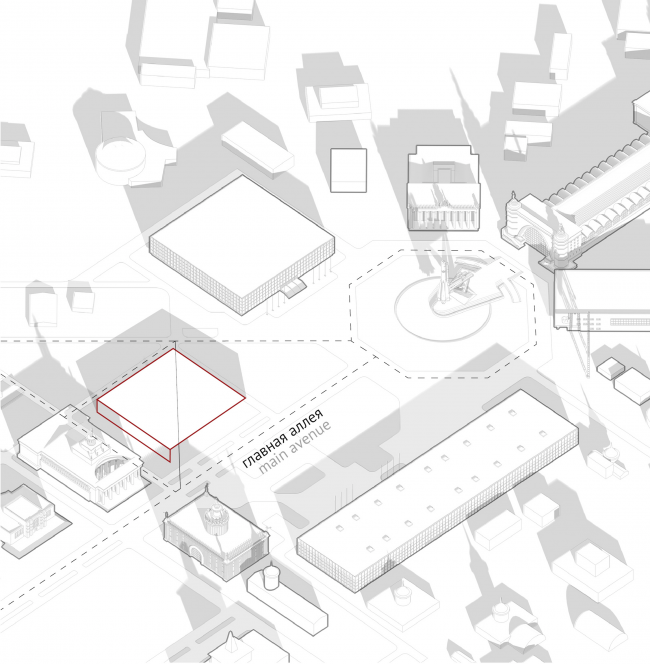 We decided that it would also be important to demonstrate how rationally we use a non-renewable resource – the surface of the earth: we have arranged a green public area with a cafe on the roof. In summer, lectures and other events will be held there. The idea of using the room for a green zone fits perfectly with the "green" energy principles of "Rosatom" and sustainable construction.

It is interesting that during the process of the project evolution, while preparing countless numbers of variants, we considered almost all ideas that we saw in the projects of our colleagues in the final (except for the concept of Evgeny Gerasimov). Flying plates, shapes of atom - we went through all of these variants, a colossal amount of versions, but in the end, we went a little further in our project. - Will it be difficult to implement your project - especially in a down economy?

- Yes, of course we cannot avoid the fact that it is a very complicated project. I would call it challenging, it takes up the highest positions concerning complexity of engineering tasks and construction aspects, not only in our country, but from the international point of view. But our client "Rosatom" is one of the largest Russian state corporations and it has enough resources for the implementation of the project. Although I must say that most of the problems are to be faced in the field of engineering and planning: it is not so much the question of unique materials as questions regarding their combinations.

On the other hand, the client wants to use the pavilion for the exhibitions for the public and its employees, as well as for its own business tasks: conduct presentations, invite important people from all over the world for selling services and products to them. Such space is supposed to exist for 20-30 years. That is why the phrase "we are not so rich to buy cheap things" describes our pavilion very accurately. The client will be needing it for a long time: unlike many other ways of energy production, the atom energy is being currently actively developed and will exist for a long time. 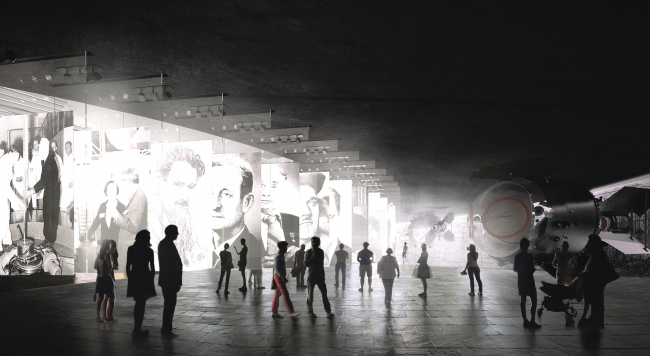