The Effectiveness of Simple Solutions

In this article, we are featuring a contest project of "Nizhnie Mnevniki" metro station by DNK ag. The contest for the best architectural and engineering concept of "Nizhnie Mnevniki" and "Terekhovo" metro stations announced by "Strelka" bureau at the commission of "Mosinzhproject" gathered an unprecedented number of participants - totally, 121 projects were submitted. Shortlisting from among so many proposals the top ten was quite a tall order so it comes as no surprise that a lot of interesting works were in fact left outside the list. One of them is the projec by DNK ag whose authors did not limit themselves with superficial analogies but "delved deeper" into the task in more ways than one.

Over the recent years, the Moscow metro has been rapidly growing. In the next year, it is planned to launch into operation the first fragment of the so-called "Third Transition Contour" - in fact, yet another ring line - that is to connect the peripheral areas of the city among themselves. Considering the terms of the entire program and the economic realities, it was decided to switch over to the technology of double-way tunnels. Accordingly, instead of the one central "island" platform, the new stations will be getting two "bank" platforms separated by two parallel pairs of railroad tracks. However, the rate of laying the tracks is not the only thing that the ambitious plans of the Moscow government have in them: what also is very important is keeping up the high architectural standards set by the first builders of the Moscow Metro back in the 1930's.

The professional contests - the first one, for the best design of "Solntsevo" and "Novoperedelkino" metro stations taking place last year - serve exactly this purpose. Now the Russian and foreign architects were offered to design two more metro stations of the new "riverbank" type in the area of the Mnevniki riverbed that is turned almost into an island by the sharp bend of the river. The specifics of this territory are all about the fact that the architectural context here is nonexistent per se; what is known as of this date is that there are plans for making buildings of public and business function with a possible construction of a Parliamentary Center surrounded by a park. For this reason, the architects of DNK ag first considered the natural and historic background of this place. According to Natalia Sidorova, one of the authors of the project, "the main hero of this land site is the river itself, and the concept of the project is based on the interpretation of the associations that it brings up - CURRENTS, STREAMS, REFLECTIONS, RIPPLES ON THE WATER, OPENNESS. At the same time, the image of the pavilion and the station in general must fall in line with the image of the future public and business center dissolved in its landscape surroundings". Based on this idea, the architects were able to come up with a project with a rich chain of associations that are there in every detail of the project and are sometimes read on the subconscious level. The first emotional event awaits the future passengers while still on the street when they are approaching the metro entrance. On the plan, the pavilions have a pointed streamlined shape, very much like a boat swimming in the stream of city traffic - thus the architects address the famous "fishing" past of the village of Mnevniki that once stood here. The fish that would get in the local people's toils was mostly burbot or "men'" as the locals would call it - supplied to the Tsar's table, the fish gave the name to the village and later to the modern district. The glazed facades of the pavilion's "board sides" sport a pattern of slanted metallic stripes. When viewed against the light, the superposition of the stripes of the two facades forms a diamond-shaped pattern whose artistic effect is strengthened by the different color of the stripes: dark-gray on the outside and warm orange on the inside. As you move, the stripes "shift" in respect to one another forming a dynamic picture reminding the surging of the waves and at the same time looking a bit like the lath of a garden gazebo. And, because these parallels are only given as a hint and they work rather on the emotional level, they do not "overload" the viewer's mind. Once you enter the pavilion, the effect is still strengthened at the expense of the mirror ceiling. 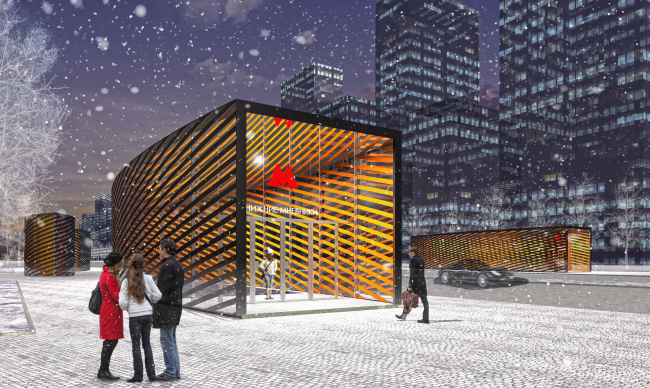 Passing through the laconically decorated underground crossing, accompanied by the alternation of the shadows and the light falling from the pavilion (this theme is picked up by the parallel lines of lights on the ceiling) the passenger finds himself in the lobby of the metro station. The authors of the project viewed it as a public city space in its own right akin to parks and squares but, of course, limited by the rigid boundaries of its shape. As Konstantin Khodnev, one of the authors of the project says, "this is urbanism scaled down to the size of interior design". This is why this space logically gets a few elements specifically inherent to public interiors and changing the very scale of this space - making it more human-proportionate. For example, in the ticket office, with its pristine dark-gray walls everything is "human-friendly": the benches, the information displays, and the ticket windows is placed in "warm" wooden niches while the escalator areas boast sculptural wooden benches - rather of the park than the interior kind and resembling tree trunks washed ashore or felled by the wind upon which a lonely wanderer could sit down to rest from his long walk down the river bank. The main artistic theme running through the project - that of the interference effect of the light rays - continues here as well but now the large-scale play of lights and shadows (or ripples on the water surface) takes place on the ceiling. The sophisticated dynamic effect is achieved by very simple means: over the entire ceiling, at an acute angle to one another, long linear lights are placed and - still a little lower - perforated metallic stripes. What matters here is the fact that the passenger becomes not only a spectator but an active participant of the performance: it his because of him moving that the picture comes alive, "the ripples run over water, and the lights alternate with shades". This a solution as beautiful as it is ideologically justified - considering the function of the station as part of the dynamic underground traffic flow.

Yet another "character" of this architectural play is a semicircular wall along which the escalators move down to the platform. The wall is dissected by thin rays of light falling at different angles from the lights installed along the perimeter of the lobby - a carte blanche for various lighting scenarios - which, quite possibly, can put a sensitive observer into the mind of a water stream permeated by rays of sunlight. Yet again the authors of the project avoid accentuating any specific image. Over the couple of minutes of waiting for the train, the passenger will have the time to get a feeling of being at a river bank (as we remember, the platform is of the "riverbank" type), the railway tracks playing the part of the "water artery", the backlit prism with an information display - the stream of sunlight, and the wooden inserts with benches in the walls of the platform - say, the part of riverside villages. At the same time, the laconic shapes of the few architectural elements, the pristine tones and the textures of the finish (one cannot help but mention the fact that all the solutions proposed in the project are easily implementable and rather cost-efficient) leave you in no doubt: you are inside a modern public facility, one that is respectable, sturdy, and business-like, having nothing to do with fickle vagaries of fashion. One of the distinctive features of the Moscow metro has always been the synthesis of architecture and art. The authors of the project revise this idea on a whole new level. In the 1930's, when the construction of the metro was only just beginning, the beautiful central stations were decorated with the best samples of what the soviet art had achieved to that day: sculptures, decorative panels, and mosaics. Today, the world of art is ruled by different shapes - involving the viewer, visual effects, and technological friendliness. Sensitively reacting to the artistic context, the architects of DNK ag created a project in which architecture merged with modern art becoming almost an art installation in its own right. "This - Natalia Sidorova says - is our manifesto of revising the narrative of the Moscow metro as an art event the way we understand it and the way we think it could look today".
Text by: Konstantin Khodnev, Daniel Lorenz, Natalia Sidorova, Lilya Aronova
Translated by Anton Mizonov