Anatoliy Stolyarchuk: "I've got no interests outside of architecture".

An interview with the Saint Petersburg architect and the leader of his studio Anatoliy Stolyarchuk. Archi.ru:
- How did you start your career in architecture?

Anatoliy Stolyarchuk:
It all started with me coming to Saint Petersburg which was called Leningrad back then. I was born in a small Ukrainian town of Kamenets-Podolsk, and I went to a regular school there. And when I came to Leningrad I realized that I wanted to be an architect. When I was taking my entrance exams at the Academy of Arts I only had behind me an amateur painting club and private drawing lessons, so I in fact was a "tabula rasa" - but because of this I imbibed everything like a sponge. I had great teachers: besides Sergey Speransky whose studio I attended during my second year, these were such well-known architects as Alexander Macheret, Valerian Volonsevich, and Nathan Tregubov. There was a wonderful aura about the Academy that gave me strength for years to come.

- If I ask you to name the milestones of your professional career, what would it be?

After serving in the military, I spent fourteen and a half years in our famous LENPROJECT in Studio 2 that was then lead by Login Shreter (it was later on headed by Jean Verzhbiisky and Nikolai Apostol), and by the end of my time there I became the deputy chief. In 1989 I was invited to head a studio in LenZNIep where I then worked for nine years. This studio was once headed by Sergey Speransky; over that time my colleagues were Victoria Struzman, Mark Serebrovsky, and others. To me, it was a bar raised pretty high.

It was Perestroika at that time; there were no large projects to do, yet still I was able to get a very important experience of interested residential construction. In collaboration with Valery Kaplunov, we designed a residential compound near Nizhny Novgorod for the military people and their families who came back from German Democratic Republic. Then, this time unassisted, our studio designed a similar compound in the city of Tver. Back in those days, integrated design - with schools and kindergartens, not to mention other objects of social and cultural infrastructure - was quite a rarity. Because they would first build the serial standard residential buildings and then they would try to "pull up" the infrastructure to them in a way that was painfully inefficient. In our case, we from the very start provided for a fabulous school with a swimming pool, a kindergarten, a community center - and all of this was ultimately implemented! In 1998, I opened my own architectural company and I've been running it up to the present day.

- One of your trademark projects is the chain of "Lenta" hypermarkets...

Yes, we developed ten projects, out of which nine have been implemented. For the Russia of the early 2000's, the chain hypermarkets were quite a novelty. We considered our task as taking those all-functional premises, pre-calculated down to the last inch, and giving them recognizable and customer-friendly features - first of all, by virtue of organizing their entrance groups. We had quite a hard time trying to convince our customer that this was really necessary but he ultimately was satisfied because our design solutions were really the ones that sold. We worked quite a lot in the genre of hypermarkets (besides "Lenta", these are "Norma", "Metrika", and "Castorama" chains) but we also built a lot of residential and public buildings. 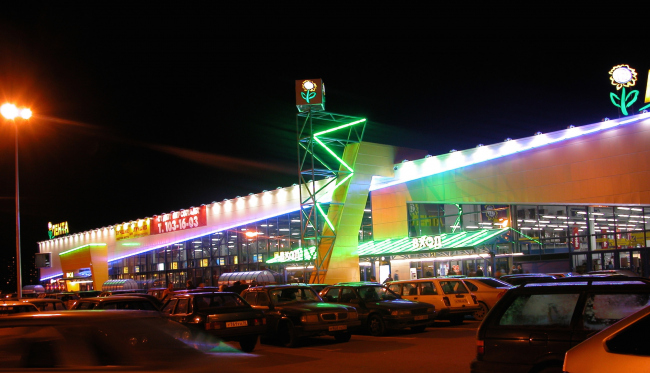 - Which of them do you consider to be your milestones?

Besides "Lenta" hypermarkets, these are the building of the skating rink on the Butlerova Street, the house that we designed on the Professora Popova Street, the Olympic Trade Center ("Artem" shopping mall) next to Sportivnaya metro station, an office center at the crossing of Nevsky and Suvorovsky prospects, PEAK Shopping and Entertainment Center, and the chapel on the Sennaya Square... 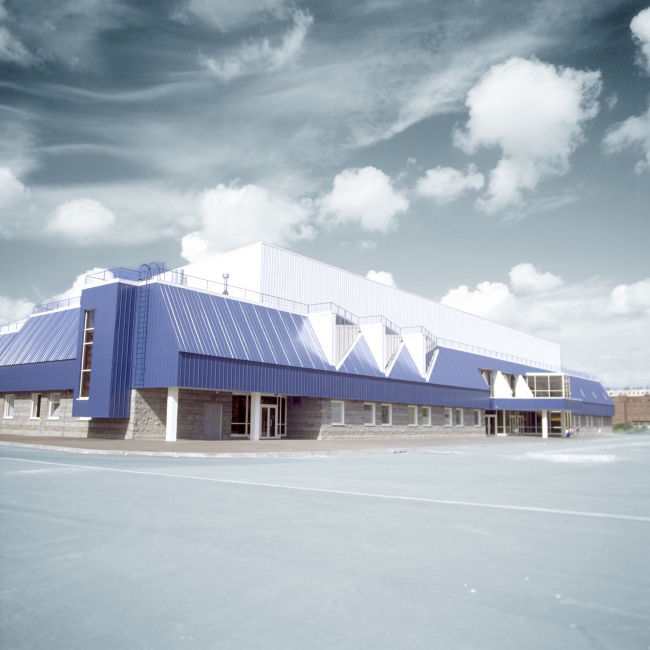 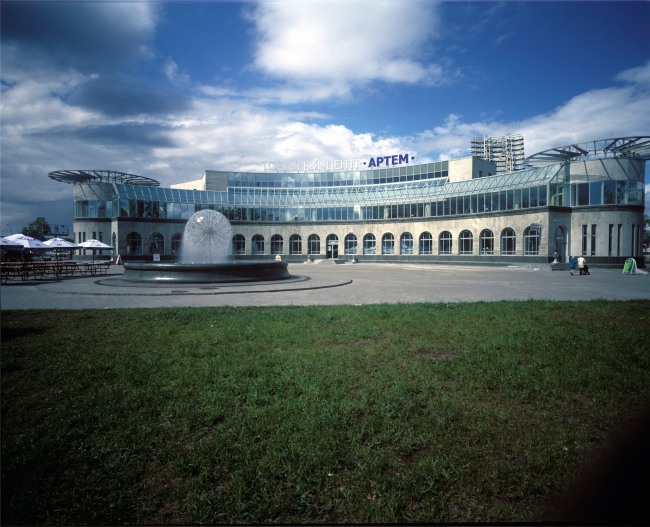 - These all are very different buildings. What are your professional principles?

I profess honest and functional architecture. Second - architecture must be humane. I don't think an architect has the right to thrust either to his customer or to the end consumers his personal subjective ambitions; what he must do is immerse as much as possible into the material that he's got to work with and solve his task taking it to the limit.

- At the same time, your buildings look nothing like functionalism...

Those compromises in favor of decoration or historicism that I allowed of were the steps that I had to take under the circumstances. A characteristic example of that is the house on the Professora Popova Street. Back then, in the early nineties, we were still afraid of making ostentatiously modern injections into the city's historic structure. I took that path later on, for example, in the project that I did for the Mira Street, and I do not on the least regret it, even though the customer was always pushing us to stylize things - which even led to a conflict. 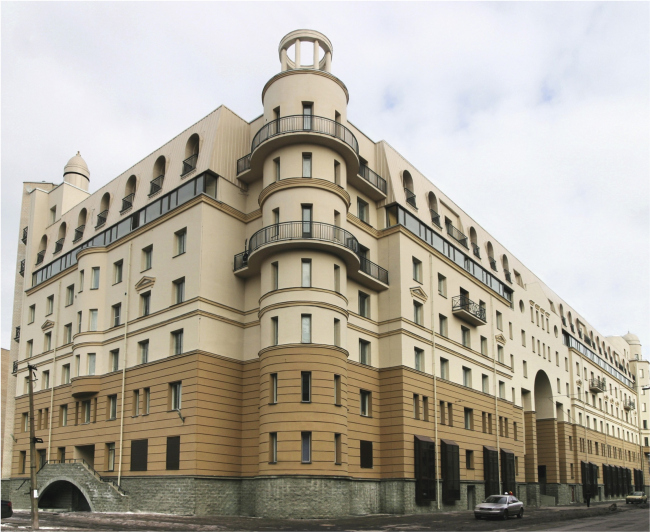 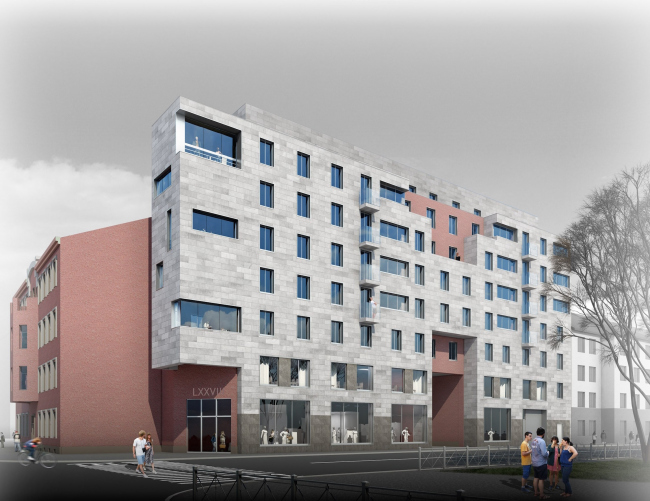 - What motivates you in your work?

The opportunity to build something that had real value, something that's socially important. In recent years, we've done two projects of youth entertainment centers, as well as a rehab centers for disabled persons and disabled children. Being implemented, such projects bring me immense satisfaction. 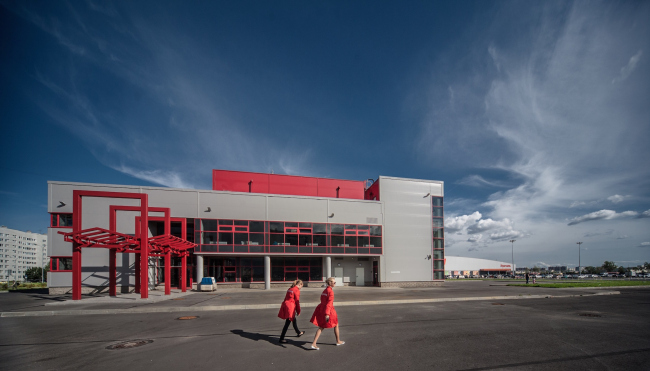 - You have for years been teaching at Repin Academy of Fine Arts. What does your teaching activity mean and how important is it to you?

I've been teaching at the Academy since 1999, and the more I do the more I value the time that I spend within its walls. I also work as Vladimir Popov's assistant: not only do I teach but I also learn things - from my colleagues and from my students as well. The Academy is the place where some of the finest practicing architects of Saint Petersburg work, and this circle of communication really means a lot to me.

Remembering my student days I try to give my students what I fell short of getting back in my time. Our professors would not analyze our work as often as they should have, and sessions with Sergey Speransky were an event that we all looked forward to. Communicating to my students pushes me to stay in shape in order to be able to always answer their questions, and to be in the loop of what's going on in the profession. I consider my work as a mission, I try to help the young in any way that I can, and be not so much a strict teacher as a mentor and an older friend. There's no other architectural educational institution that teaches the things that the students can learn at the Academy with its century-old traditions. Here we treat our each and every student as a unique personality.

- Presently, you head the Union of Architectural Studios of Saint Petersburg, an organization that many regard as the elite of the Architects Union of Russia. Please share a little bit about this social activity of yours.

It's not in my character being a boss. Once I started working in my own studio I sighed with relief because I no longer had to supervise a staff of some eighty people. In this organization, I am not meant to be a "boss" - within the limits of my power I handle organizational issue and this is how I make myself useful for the professional community. I think that our 15th anniversary biennale that we organized in April was quite a success. Quite recently, in Moscow, there was an exhibition named PROEstate in which our young architects took part. Among the organizers, there was the Guild of Managing Developers and the Union of Architectural Studios. The main prize - a professional visit to Germany - was won by the alumni of our Academy which was of course great news for us. This is all about integration into the European management system that the professionals need so much these days.

- What are your interests outside of architecture?

With all due modesty, I will say that I've got no interests outside of architecture.

- What could you wish to yourself?

I could wish to myself to be in what I would call "creative demand". I really want to make a positive difference, want to implement the experience that I have accumulated while I still feel I have the power to do that.
Text by: Anatoly Stolyarchuk, Irina Bembel
Translated by Anton Mizonov