A multifunctional complex designed by "ABV Group" on the land site between the Yauza River and the Bolshaya Pochtovaya Street will not only yield new housing square meters but also a new pedestrian route and an attractive public space. 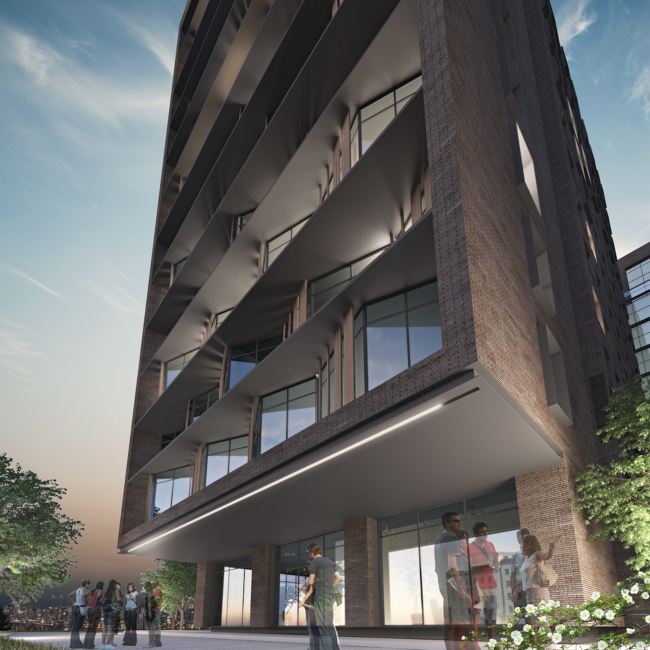 Today, the banks of the Yauza River show to the pedestrians and drivers that stew in the inevitable traffic jams a rather mottled picture. Pieces of parkland and residential complexes built at the turn of the current century alternate with car services, garages, sewage treatment facilities, and industrial parks stretching for miles. Almost each of these projects, with rare exceptions, is in fact "a thing in itself" and inspires no desire to stop by and take in the details. The architects of "ABV Group" decided to break this pattern: the residential complex that they designed, with its façades overlooking the Rubtsovskaya Embankment, is devised as a territory that is totally open to the city people, a territory that opens up new pedestrian routes, and provides a direct access to the Bolshaya Pochtovaya Street.

The land site of an irregular shape is curbed by the Yauza River on its east side, with its opposite west side gazing in the direction of the Bolshaya Pochtovaya Street. Currently, the grim concrete fence that stretches along the river conceals a territory as vast as it is hard to make much sense of: cut into small and mostly unused segments, it consists of derelict buildings of a weaving mill, a tire service, a substation, various office buildings, and fragments of barbed wire... The whole picture cannot be called cozy by any stretch of the imagination but, still, this is something that a Moscow resident's eye is quite used to. The only object that seems to be capable of attracting one's attention is a red-brick building of the XIX century overlooking the Rubtsovskaya Embankment. 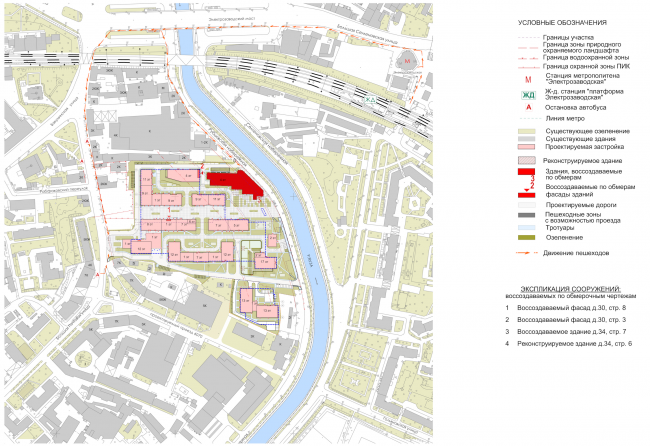 It is expected that the planning and conceptual axis of the project will be centered on a broad boulevard: running from the Bolshaya Pochtovaya Street towards the Yauza, it will partially coincide with the current line of the factory's inner driveway. Open to public, this boulevard is meant to become a new pedestrian artery that will command a river view from the Bolshaya Pochtovaya Street, and will give people an opportunity to take a stroll toward the river and back again. This boulevard will, of course, have all the features expected from a modern human-friendly urban territory: green plants, landscaping work, and cafes and shops for which the ground floors of the buildings aligned along the boulevard will be allotted. As for these buildings, the architects, in spite of the significant saturation of the new residential complex, designed then as medium-rise, only five to seven floors high, and placed them in a staggered order, doing everything possible to avoid a "window-to-window" planning situation and trying to give the strolling space as much air as possible. This is why, for example, (and also in order to enhance and improve the river view) the boulevard is designed as being rather wide, reaching a maximum of 25 meters in its central part.

At the end of the pedestrian territory, the architects are planning to organize cozy squares that will accentuate the entrance, and, like a River estuary, will invite people to get in. Behind the arrays of the houses standing alongside the boulevard, there will be elongated semi-closed private yards. These yards will also be landscaped; they will only be accessible to the residents. All this put together – the boulevard and the two large residential blocks on its either side - stands upon the roof of an underground parking garage.

The south appendix of the territory will include the two tallest towers of the complex, one being a 13-floor high administrative one, and the other being a 17-floor residential building with a nursery school in its bottom floors. The nursery school will be flanked with a park on both sides, the park's north border adjoining the boulevard's entrance square - together they will form yet another pleasant-looking public territory commanding a river view. 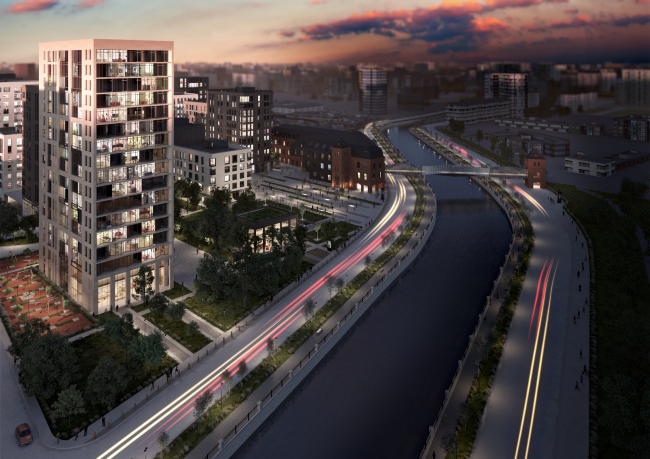 According to the authors, the façades of these two towers that face the Rubtsovskaya Embankment must become a recognizable "visiting card" of the complex, perfectly viewable from the river. The office tower is brick, and the residential one is light stone, travertine. The main part of the "riverside" facade of both buildings is encased into a slender "television" frame, and is filled with a zigzag of glass stanzas separated by the thin ribs of floor fracturing - a solution that is looks great from the sculptural standpoint on the outside and one that is also efficient on the inside because it allows the residents and the office employees to enjoy the river panorama that is open, thanks to the triangular shape of the ledges, on two sides. The architects also took care to makes the most of the river views for the residents of the other buildings as well: at all the viewing points, the corners of the buildings are "cut out" from top to bottom and replaced with panoramic glazing. Mainly, these corner parts of the apartments contain kitchens and living rooms. The concept of a multifunctional housing project on the Bolshaya Pochtovaya Street. View from the Rubtsovskaya Embankment © "ABV Group" architects The motif of the wave is picked up by yet another office building that flanks the complex from the west, from the side of the Bolshaya Pochtovaya Street - its façades are denser, there is more brick in them, but the soft waves pick up the rhythm set by the "river towers". The wave-shaped red-brick facade is decorated by an unexpected accent: the roof of the building supports a totally different volume of a two-story penthouse, an austere glass parallelepiped with floor-to-ceiling windows and a thin mesh of wooden ribs that unite the two floors with their vertical rhythm. This is a very large and comfortable volume with an inevitable visual effect of the surroundings of the Bakuniskaya (former Pokrovskaya) Street: from here, one can see the Church of Intercession in Rubtsovo, and the cheerful-looking belfry of the Nikolsky Temple, and the Stalin-era houses of the Gastello Street. Quite a different accent is presented by the historic factory building on the Rubtsovskaya Embankment - it is meant to allow the modern housing project to better "grow" into its historical environment. As for the small water tower that now stands all but unnoticed on the depth of the industrial park, the architects decided to restore it, based on its measurement diagrams, at a new place - bring it to the beginning of the boulevard where it will become the architectural "gem" that will accentuate the fact that the complex exists "in different times". The first floor of the factory building under reconstruction will be turned into a pedestrian arcade with shops - if viewed from the embankment, this arcade looks like an embryo of a cozy town - further on, the motif is picked up by the square, the boulevard, and the 17-story tower whose two bottom floors are also turned into an arcade.

In addition to the water tower, the architects are planning to recreate the façades of two historical buildings that are too shabby to be preserved: one of them will be inscribed into the front of the boulevard, and the other - into one of the private yards. The design of the buildings standing along the boulevard is pretty laconic: right angles, a lot of glass, and a balanced rhythm of the window apertures. The decoration, just as it was the case with the flanking towers, is based on two materials: brick (light-colored and the usual terra-cotta type) and travertine. One should also take notice of the fact that some of the buildings are monochrome, and some split their colors in two: for example, up to the left of the stairwell, the house is light-colored, and on the right it is brick, and vice versa. The light-colored stone volumes and the red-brick ones alternate freely but in a balanced way, and each square that serves an entrance to the boulevard gets red-and-white propylaea. On the embankment, they form a somewhat more complex composition that consists of three parts: on the right, there is the saturated red of the factory building, on the left, there is the reserved brown of the modern brick of the office building, and in the center there is the light-colored 17-story tower, the tallest building in the complex. And - yet another perspective! In the future, it is planned that a pedestrian bridge over the Yauza will be built: on the western bank it will be integrated into the historical volume of the factory building, while on the eastern bank the supportive role will be played by a stylized brick tower with a wooden roof - it looks like the water tower under reconstruction that stands on the river's right bank, and at the same time looks like some historic fortifications, putting one in the adventurous and romantic mood and accentuating the historical value of this place: it was not far away from this place, behind the German and the Basmannaya Slobodas, that the Tsar's "palace village" of Pokrovskoe-Rubtsovo was situated, in which Elizabeth the Empress, the daughter of Peter the Great, would lie ill being at the same time wont to grow her gardens. Meanwhile, the architecture of the bridge itself does not have a tiny bit of historicism about it: it is a transparent beam, twisted in a spiral-like fashion - which ultimately forms a great contrast.

Connecting the two river banks, the bridge will serve as a continuation of the route that starts at the Bolshaya Pochtovaya Street and then runs down the boulevard, because this will give the residents a direct access to the "Elektrozavodskaya" metro station - which will significantly increase the cohesiveness of this part of town that is still underdeveloped from the urbanist standpoint.
Text by: Nikita Biryukov, Lilya Aronova
Translated by Anton Mizonov The concept of a multifunctional housing project on the Bolshaya Pochtovaya Street. Bridge © "ABV Group" architects The concept of a multifunctional housing project on the Bolshaya Pochtovaya Street. Plan of the underground parking on the -1st floor © "ABV Group" architects The concept of a multifunctional housing project on the Bolshaya Pochtovaya Street. Plan of the first floor © "ABV Group" architects