Erick van Egeraat has brought forward an alternative proposal within discussion about construction of a museum complex in the Budapest city park. Budapest has announced the tender results for a project of a museum complex that will present collections of the Hungarian branch of Ludwig Museum, the New National Gallery and some other collections. The complex will be located on the territory of the two-hundred-year Vàrosliget city park. The City Hall is planning a grand construction and serious investment. Six large museums, immense area – naturally both the professionals and the public wonder: what remains of the park, so dear to the citizens? The same question was sure to occur to Erick van Egeraat – an experienced city planner, author of master-plans for districts and even cities; and an architect that has been successfully working in the Hungarian capital since 1991, knows it perfectly and admires it. “There is so much vacant land and unused areas in Budapest – he says wondering. – Why should we destroy a popular and beautiful park when we can bring to life the historical districts with the help of museums?”

The alternative suggested by the architect is logical, cost effective, ecological and at the same time – beautiful. For one thing, according to the expectations of van Egeraat’s team all six museums appointed for moving will be easily located within a kilometer distance from the city center. Let’s say that the first two “migrants” – Ludwig Museum (moving from the Palace of Arts in Ferencváros) and the New National Gallery (whose collections are now exhibited in the rooms of Buda Castle, that are initially not suited for museum purposes) – will fit perfectly into the new wing of the Budapest City Hall – the tender for its modernization and expansion was already won by Erick van Egeraat in 2008. It was not only and not merely about the restoration, but about completing the construction: the building where the administration of the capital sits today is basically a respectable, massive suspended construction, canonized by centuries of time. Construction of the future City Hall – originally a recreation house for physically challenged people and veterans of war – began in 1716 by Fortunato de Prati. Seven years later, he was replaced by Anton Erhard Martinelli – an Austrian architect of Italian descent. The first stage of construction was finished in 1747 – the wing extending along today’s Városház street (from Hungarian – City Hall street). The building impressed with its sizes and decor: the baroque façade of almost 190 meters long was decorated with a central tower and three porticos with allegoric statues and bas-relief glorifying the victories of Eugene of Savoy and king Karl III over the Ottoman Empire. In the late 18th century, the building was repurposed for grenadier barrack rooms, and only in 1894 it became the City Hall. The original plan of the complex presented a building, perpendicular in plan, almost twice as big as the existing one and with four symmetrical courtyards. However, for several reasons – among those the closely standing city wall – these plans were never implemented, and only in early 19th century the city council decided to complete this square by building the missing northern wing along Károly körút boulevard, Ferenc Deak square and Gerloczy Street. The tender was announced, the winner – chosen, deadlines of construction were established – 2012 – but, even though the city wall had been all gone besides the stonework under ground, the project remained a project. This time – for financial reasons: the recession of 2009 had a great influence on the Hungarian economy. 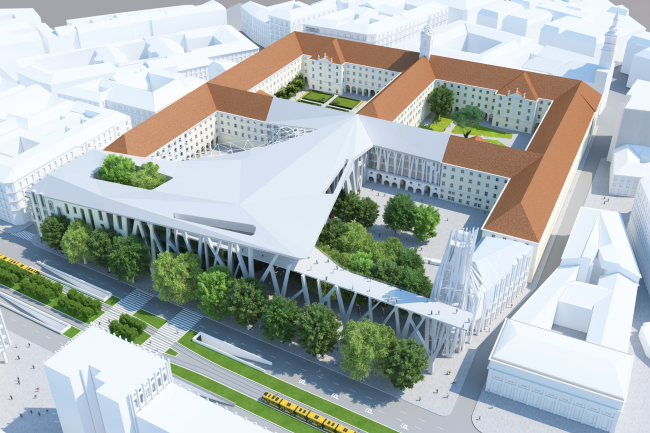 Project for New National Gallery and Ludwig Museum in Budapest. Plan of the main floor © (designed by) Erick van Egeraat

The project of Erick van Egeraat combines a reconstruction of the historical building with new construction that is to take up about 4 hectares total. The main idea is most possible permeability of the object, its inclusion into the fabric of the city life by means of creating new pedestrian routes (you can comfortably cross the City Hall from the boulevard to the pedestrian street Vaci and further on – to the Danube and bridges leading to Buda) and conveniently combining three main functions within the complex: cultural, administrative and commercial. Surely, if two large museums move here, the cultural component will be strongly supported, but it also played a most important role in the original project. The central part of the ensemble is the Forum – a multifunctional area providing plenty of opportunities for arranging exhibitions, theatrical performances, concerts and conferences. This is the place where the architects suggests placing the collections of Ludwig Museum and the New National Gallery. The wing allocated for them (a perfectly suitable term in this case) breaks in the regular-shaped plan of the historical building like an airplane or a bird’s wing. The area in front of the Forum, sheltered under a wide hanging roof, is supposed to be the main gate to the complex. The authors plan to place cafes, information services and places for events here. The courtyard of the museum can also be used for public events – one of the four yards planned long ago by Martinelli – but of course, primarily it is meant for expositions.

As proposed by Erick van Egeraat, the city administration retains the existing rooms and two courtyards – this way nothing will disturb it from work. Commercial objects can be placed in the same part of the new construction – that stretches along Istvan Barsi Street – to make the complex more attractive for the public – shops, apartments, an art-hotel, etc.

It is only at first sight, that the striking, emphatically modern architecture of the new wings contrasts with the existing part of the complex and the urban fabric surrounding it – but in fact, as it always is with Erick van Egeraat, there are plenty of more or less obvious connections, allusions, precise and permissive rhymes between them. The main facade of the ensemble, stretching along Károly Körút Boulevard, represents a massive metaphor of movement form the old to the new, from closed to transparent. If at the eastern corner, it repeats with a loose echo the proportions of the original building adjusting to the regular rhythm of the narrow windows, then moving closer towards Deak Square the openings become wider, partitions step apart and lose their linearity; and now we see the white silhouettes of the trees – not so much covering, but underlining the space of the courtyard. By the way, another conceptual layer is concealed here: there is the City Hall park in place of this courtyard now, and within the new modernization plan it will remain untouched to preserve and add up its present public functions – the park is often a place for fairs and festivals. The plastic culmination of the project is the transparent tower at the corner, decorated with “tree trunks” growing out of the symbolically-rendered park of the main façade. “The watchtower is not supposed to look as an excuse for what we are doing here – says the architect. – On the contrary, it should be seen as a sign of pride for everything new”. And this rather futuristic construction too respects the historical context of the city: fragile and almost ephemeral, it does not dominate over the whole construction, but adds new harmony to it. Together with the two “neighbors” – the tower of the Anker House, an architectural monument of the early 20th century, and the City Hall of the 18th century – they can form an impressive trio. The tower stands by the city’s “balcony” – the promenade gallery along the upper part of the façade that should also give marvelous views. Erick van Egeraat often defines his projects as “the modern Baroque” – meaning not the style, but his “personal planning strategy”, the complexity and multiplicity of architecture. In the project of modernization and expansion of the Budapest City Hall, the modern Baroque creates a brilliant combination with the historic one, underlining and enriching it. In this context, the presence of two such collections as the National Gallery of the old Hungarian masters and Peter Ludwig’s collection of modern art, within the walls of one ensemble makes the symbolic meaning even stronger. If we add the obvious advantages of the project – the cost effectiveness, location of the City Hall on the “museum axis” of the city, sufficiency of the existing infrastructure – then we see, why this alternative proposal of Erick van Egeraat has brought the discussion about the museum complex construction up to a completely new level. And it is being more and more widely recognized.
Text by: Erick van Egeraat, Lilya Aronova
Translated by Anton Mizonov Project for New National Gallery and Ludwig Museum in Budapest. Plan of the 1st floor © (designed by) Erick van Egeraat Project for New National Gallery and Ludwig Museum in Budapest. Plan of the top floor © (designed by) Erick van Egeraat Project for New National Gallery and Ludwig Museum in Budapest. Plan of the basement floor © (designed by) Erick van Egeraat